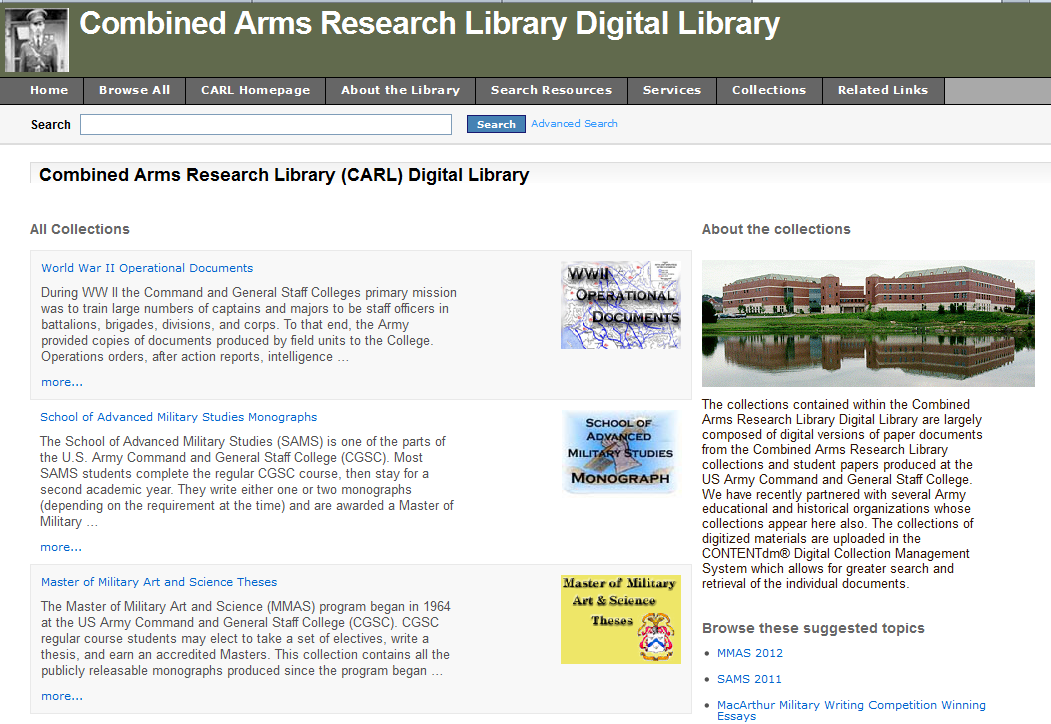 Screenshot of the CARL digital library in Ft. Leavenworth, taken 2012-09-20

A recurring theme of pages listed under these bookmarks seems to be that their design somehow harks back to the late nineties, but their content is much richer than a first look would surmise. CARL contines this trend: benhind an awkard and slow interface lingers a host of historical documents. CARL is short for “Combined Arms Research Library” and describes the library on Fort Leavenworth, which is in turn not only one of the oldest forts in the US still operational, but also counts the United States Army Combined Arms Center amongst its tenants. Fort Leavenworth prides itself to be the “intellectual center” of the US Army, and the sheer volume of documents available online certainly dwarf the Army’s Historical Center (history.army.mil).

Amongst the documents hosted are essays and thesises prepared by the U.S. Army Command and General Staff College (CGSC), but also a lot of operational reports, old field manuals and all kinds of other documents related to the military history of the US. In these the second world war features prominently, as is to be expected. Especially the After Action Reports from the divisional and corps level make an interesting reading for EUROPA afficinados.

The cumbersome interface of the website has been mentioned already, although the collections are searchible, the structure is unintuitive and purly organisatorical, the website responds slow and makes it close to impossible to get an overview about the hosted documents. An overhaul has been announced for some time now, but even now the uniqueness and historical wealth of the documents found place CARL amongst the first websites relevant for modern military history.

A visit to CARL