The Soviet meteorological office reports the winter of 41/42 to be the wettest on record with heavy rains persisting to the end of May making movement almost impossible across the vast bulk of the country. Perversely both sides welcome the deferment of the summer campaigning season.

For the Axis while in the South the motorised forces are in place much of the infantry is still tied up in the pursuit of the retreating 1st Shock Army and the Rumanians have an entire army still engaged at Odessa. Artillery assets are very sparse and will be useful in any breach of the Soviets river defences.

North of Moscow in the Kalinin bulge while pre-invasion preparations are continuing in widening the breach and clearing the west bank of the upper Volga troop levels are still short of those required to consider a major offensive. In part this is due to the diversion of troops eliminating the Soviet spearhead south of Leningrad. This work will require at least another month before significant forces can be transferred to the Kalinin area for Operation Fleischwolf.

For the Soviets every month is an opportunity to build their second defence line both from 1st Shock army transfers and newly arriving troops and reinforcements. The 8 Tank Corps received earlier in the month being a good example. 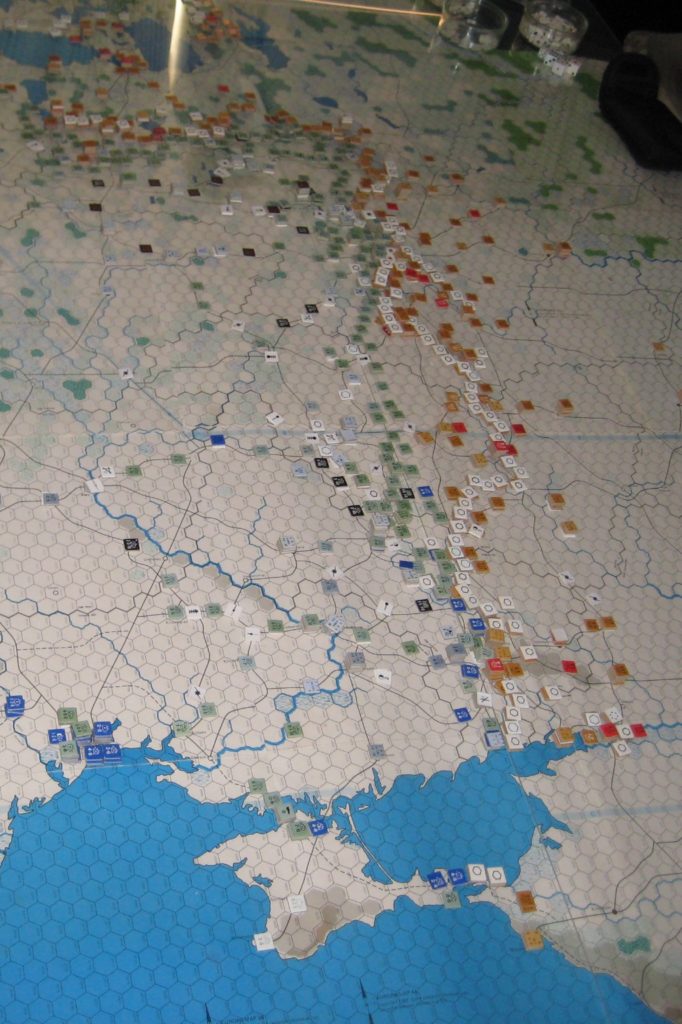 ’42 May II: Frontlines before the Axis summer offensive

Finland & Army of Norway. Ground troops continue to push south from Murmansk while Luftwaffe squadrons launch an operation against an aborted P40E at a local base sending it straight to the remnants pile.

In the centre a lone German ski battalion takes advantage of a Soviet error and slips through the lines destroying a naval rail gun unit which has been left unguarded.

In the south the Fins try to push forward on a one hex front but retreat in the face of Soviet resistance and air cover. A full strength German panzer division arrives in theatre but is detrained too far away from the action to engage this turn. 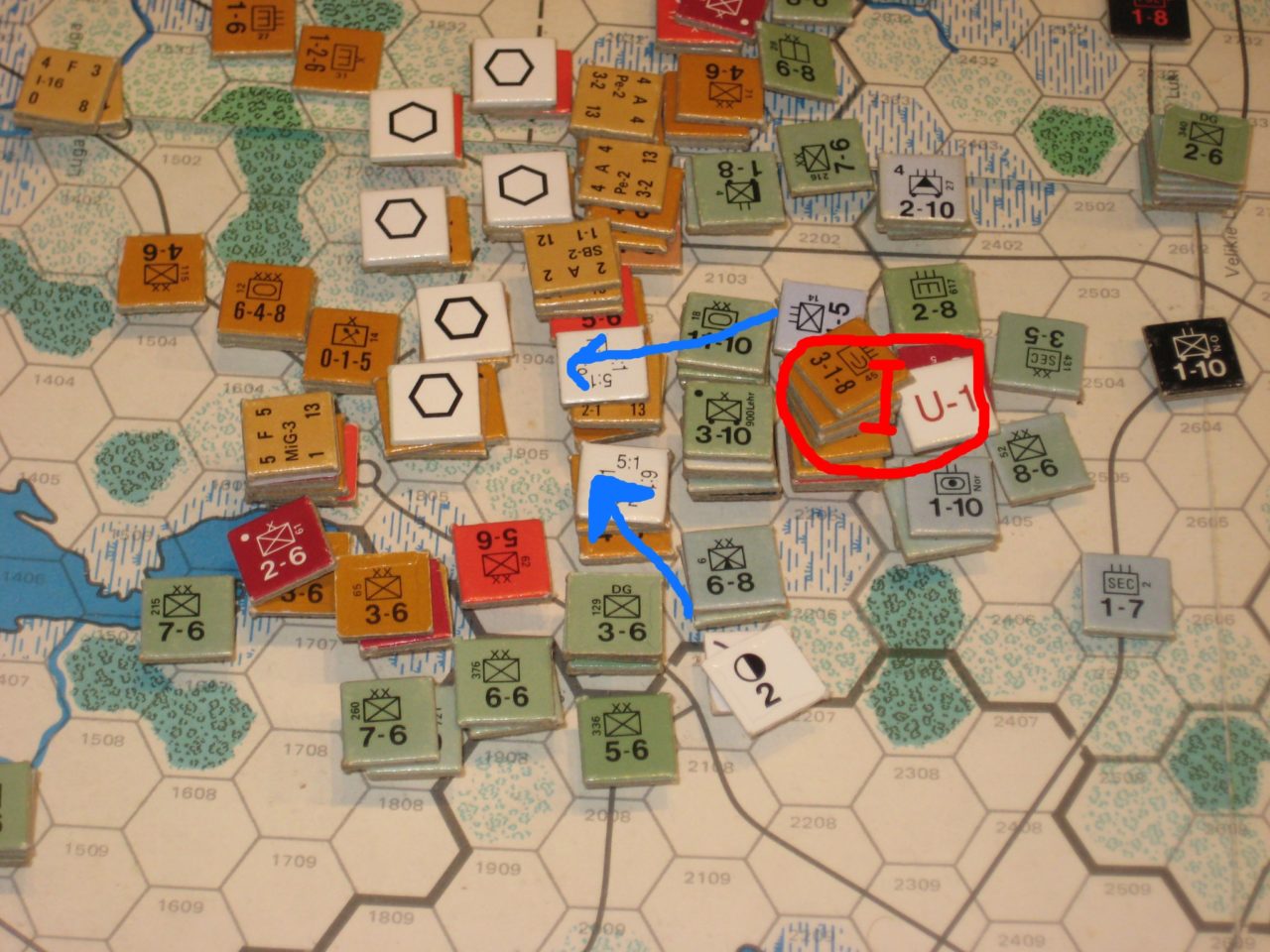 In the Valdai/Kalinin sector pursuit operations continue against the retreating Soviet defenders and newly arriving Soviet reinforcements alike. Operations continue by motorised elements to clear the west bank of the river north of Moscow. Rail conversion and truck transports will place the whole area in full supply by mid-month.

The general in charge of the breakout from the Volga canal bridgehead adjacent the NE Moscow hex takes the initiative and attacks the Soviet fortified line to the north in order to widen the bridgehead. He is granted, air support which damages but does not eliminate the supporting river flotilla. Under pressure of the attack the defenders abandon their fortified line but retreat in good order. 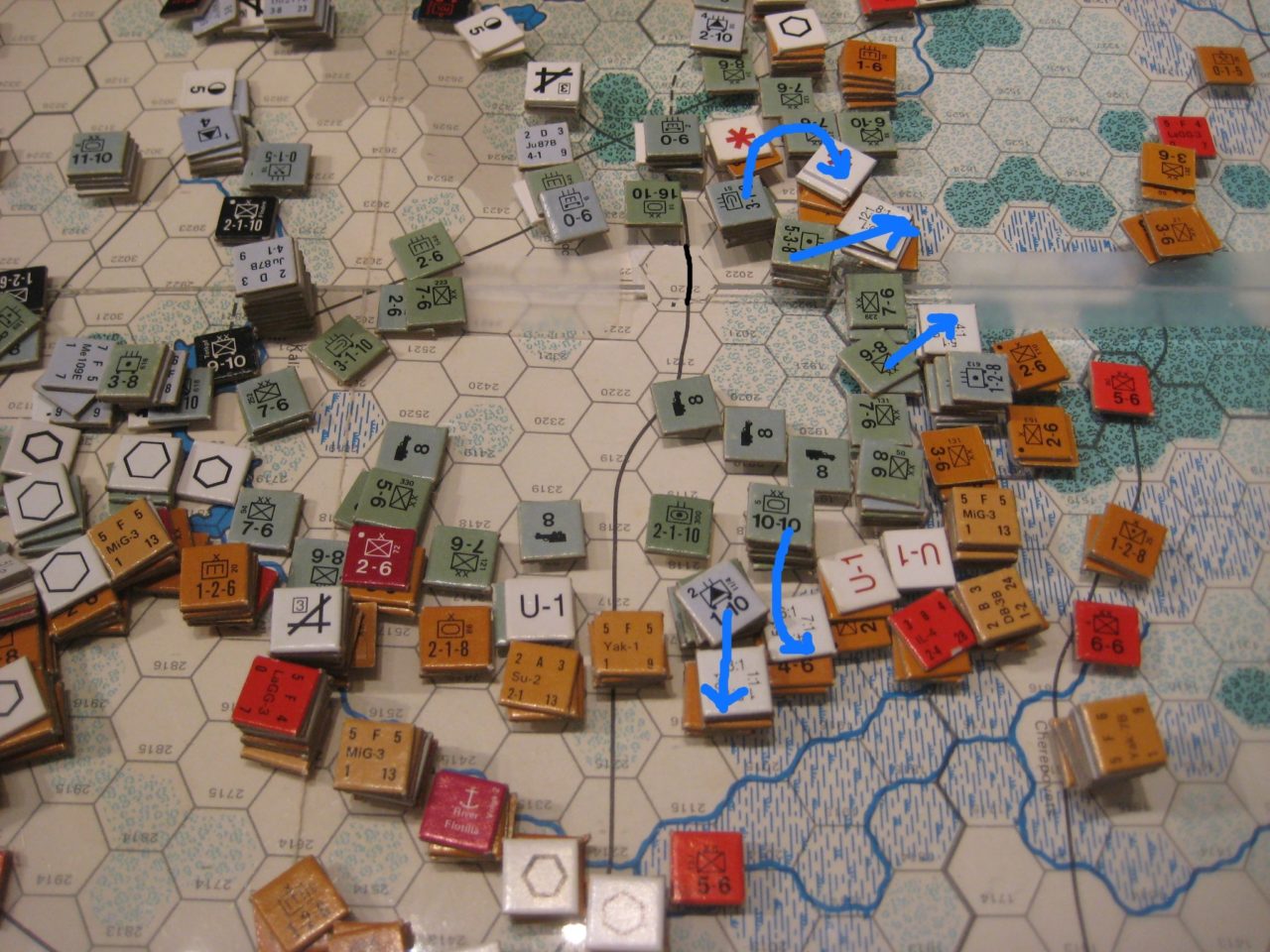 May II ’42: The Axis moves to attack Kalinin.

AGC: The forces shift infantry and motorised assets out of theatre and move to a defensive stance.

At the south of the sector some pursuit of the retreating 1st Shock army eliminates more troops struggling to return to their fortified lines through the mud.

AGS: Forces continue to build around the proposed jump-off point north of Kharkov. The scarcity of artillery assets has necessitated a shift in the penetration of the soviet MLR north of the original planned assault point to avoid river lines. This also allows infantry moving south to be in place in time for good weather.

11th Army and Odessa: The arrival of German railway guns allows the primarily Rumanian assault to go ahead irrespective of the Soviet Supply situation. The city is stormed and the attack result is a ½ EX bringing the 250 day siege to an end.

Kerch is taken by a mixed Axis assault – no current plans call for 11th Army to cross the straights which the Soviets have now fortified.

In the south in preparation of the offensive and to support the deception that Operation Angelhanken is the main effort a massive area bombardment of the rail network is undertaken to isolate the proposed attack point from reinforcements. 5 hits are achieved for the loss of one Hungarian J88A

In the north a similar operation east of Leningrad goes awry as fierce fighter opposition downs 3 German aircraft for a single abort and fails to inflict a single hit on the rail net.

In the Centre a dive bomber assault escorted by fighters from the Moscow air defence force eliminates 3 of the 4 soviet interceptors in exchange for one abort but inaccurate bombing fails to eliminate the River flotilla target.