Von Manstein casts his arm across the map spread over the table in the Wolf’s Lair situation briefing room. “Mien Fuhrer, he states “We must pull back, I recommend we instigate an immediate withdrawal of Army Group South to the Dnjepr. This is the only way to preserve the army.” “What of Kharkov”, you say, I say “I would rather lose a city than an army”. The Fuhrer studies the map set in front of him and the dispositions and strengths of troops with the estimated strengths of the enemy. Unlike his predecessor he does not consider himself a super strategist who surpasses in will and intellect those of the military minds arrayed before him.

He turns to Jodl “You are in agreement?” Jodl nods. “When do you propose this withdrawal begins?” “Immediately my Fuhrer, we must act now or we face a danger that the army will be lost.” The Fuhrer continues the questioning. “What of Rostov?. “Rostov is all but surrounded, we can hold at Kharkov and Stalino for a time, it is true, but the collapse of the centre and the subsequent move of Soviet forces southwest poses a grave danger to the troops holding there.

The Fuhrer ponders the map further “This line of defence was to be permanent was it not and yet you ask me to withdraw yet again.

Manstein replies “It was, mine Fuhrer but we did not anticipate a collapse in the centre and the calamity in the North, without the anchor at Bryansk it is no longer possible to hold the centre ground “

The Fuhrer studies the map further and after a long pause speaks “In this I will bow to your greater knowledge but Kharkov and Stalino must become bastions of defence to hold the enemy advance and allow the greater body of troops to reach the Dnieper line.

Wait until our Rumanian allies have reached Stalino and then order a general retreat, but I expect these two cities to be held for as long as possible.

No retreat from the cities!!.

There is a clicking of heals and a forest of stiff armed salutes from the assembled military coterie of Generals and Field Marshals.

“As you order, mine Fuhrer.  Long live the Fatherland” Heil Bormann!”

Weather: A slight thaw in the south brings rain and mud to Zone C, G Frosty, A, B&C Snowy.

AGN: The Axis pull back to the south side of the Dvina river, their great adventure beaten back by weight of arms and especially the Weather.

At the other end of the line two infantry divisions pull back south away from the river where the Soviets advance threatens to encircle them and Panzers and Panzergrenadiers move in to bolster the defence.

AGC: LSSAH and the rest of the relief force pull back over the Upper Dneiper and take up reserve positions again. Other Panzer XXs move south to aid the troops falling back westwards from the Bryansk area. 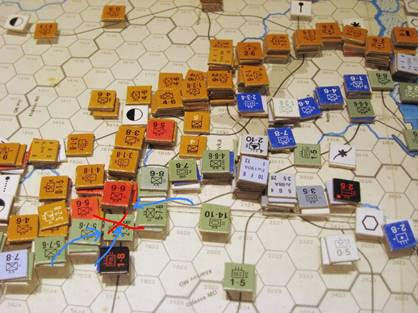 AGS: North of Kharkov 6 forts are abandoned as troops move west to prevent the advancing enemy infantry from turning their flank.

South of Kharkov the only German attack this turn is against the Guards infantry intrusion across the river south of the city. This is assaulted by all local Panzer reserves, nearby infantry, security detachments, flak, in fact anything that can reach the small bulge. The bulge is eliminated, and the line restored.

Further south the Rostov garrison is thinned as the retreat west continues.

Air Combat: The recent Soviet program of forward fighter base construction bares fruit as many Axis DAS missions are intercepted. In a series of battles all across the front-line Fighters engage and bypass the Escorts and penetrate to the bomber stream. Many such interceptions are successful with the Luftwaffe loosing 5 units and the VVS 3 fighters (2 Guards).