STAKA, military HQ of the Union of Soviet Socialist Republics.  A meeting is in progress of the top military minds in the Union or at least those who had survived the enemy and the Gulags so far.  Supreme leader of the Soviet Union, Joseph Stalin is also present and there is a lot at stake as the Field Marshals vie for resources to pursue their goals ever mindful of the penalties for failure.

Marshall Ivan Konev (Leningrad Front) is the first speak “The Reserve Army should be placed in my sector, see how much we have achieved so far with so little, only two tank corps in the thrust from Riga yet already we have eliminated a significant section of the enemy’s front and fortifications. My forces are the closest to the German border and Konigsberg could be ours in three months if my forces were suitably reinforced.

Vasilevskiy commander of the Stalingrad Front speaks next; “A German city is all well and good but here in the South my forces are about to liberate Kharkov, Stalino, Rostov, the list goes on and with additional forces I would drive to the coast capturing Dnepropetrovsk , Zaporozhe and the Crimea as well!

Marshal Zhukov in charge of the Moscow Front is the third to speak. He speaks slowly and deliberately to make his point, leaning forward over the situation map arrayed before them.  “Gentleman, Gentleman you are all thinking far too small, what we need is a large prize, nothing less than the destruction of half of the German force and all of the Rumanian and Hungarian forces arrayed against us. Please look at the map. “Here! Here, this is the key”. As he speaks, he jabs his finger at an obscure town on the bank of the Dnieper. Eyebrows are raised as the two other Marshals almost in unison say “Cherkasy? Why is such an insignificant place surrounded by marsh on the western bank of the Dnieper so important? “How does this place hold the key to victory?”. Gentlemen look beyond, what do you see? here a few miles to the south; Kirovograd and the rail net here, here and here supplies the whole of the German Army Group South. By crossing the Dnepr at Cherkasy and capturing Kirovograd we deny them supplies. Deny them supplies and we deny them freedom of movement and firepower. Then from there we capture Odessa sealing their fate and guaranteeing victory.”

With the Strategic Reserve released to me I expect Kirovograd to be in my hands before the end of the spring. We can then drive straight for the Nazi heartland in the summer and remove this scourge from the Motherland for good.

Stalin surveys the map and meets the gaze of each Field marshal in turn.  After a few moments he speaks “Well gentleman I think we have our answer I will release the First Reserve Guard Tank Army at Smolensk to Timoshenko’s Moscow Front. Infantry armies will continue to Kiev while mechanised forces will swing south and west according to the plan just outlined.

In the meantime, Marshal Konev, I expect your forces to maintain pressure on the Axis in the North to prevent a large transfer of forces South. You must, of course continue to Konigsberg.”

“Marshal Vasilevskiy you will continue to drive from the east to the Crimea and  liberate our cities but you will cede encirclement operations to Moscow front.  Continue with your attacks in reducing and harrying the Axis forces to minimise their retreat west. It is important that they do not escape before the trap is sprung.

Gentlemen I expect to be feasting in Berlin by Christmas.”

Partisans: Due to disarray in the south as the Axis flee west anti-partisan sweeps are limited and the insurgents manage 4 rail hits.

Planning: Due to the unfavourable weather the planned Airdrop/Naval landings at the neck of the Crimea are temporarily suspended.

Norwegian/Finnish Front: An attack is launched along the German right flank eliminating a 3-8 mtn III and pushing the defenders north.  Along the coast forces are still arriving at the front and the bypassed ports are invested in preparation for the elimination and occupation of the Garrisons.

Leningrad Front: in the Riga sector two attacks are made due-west on the extreme left flank of the German position with two eliminations; cardreing a 5-7-6 infantry division and eliminating a mixed stack of existing carders and flak.

Along the rest of the front numerous attacks are made with some defenders retreating in good order others being eliminated. In total three more divisions are carded and two forts taken.  Notably SS DR retreats in good order. 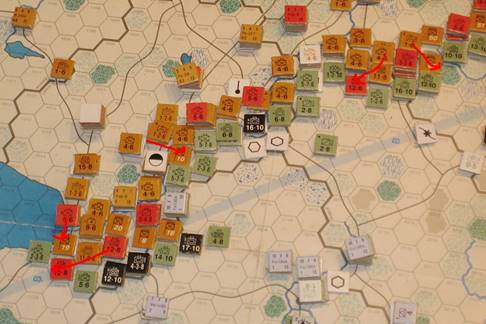 The front in the Baltic

Moscow front: Three attacks are made in this sector resulting in a half exchange and two retreats SS LSAH retreats in good order.

Stalingrad front: By far the most activity is registered in the south where the Axis line has decided it can no longer make a stand against the constant pressure from the Soviet forces and is retreating West. A number of stay behind units are eliminated while penetrations are made of the exposed left flank between Kharkov and Kiev which is growing longer as the Soviet mechanized units’ advances towards Kiev outrun the Axis units retreating east from Kharkov.  However the limited Soviet motorized assets between Stalino and Kharkov have allowed Axis use of delaying forces to gain the separation they desired between the Soviets advance and the main bulk of troops fleeing West. 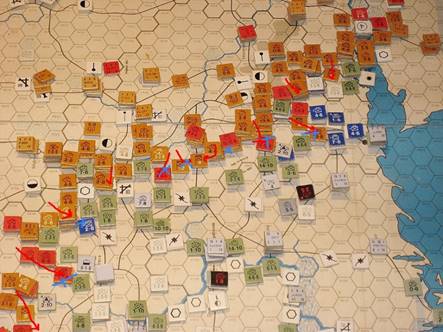 Situation in the Ukraine

Crimea: The Soviet’s toehold on the south-central coast of the Crimea is turning from an irritation to a more significant threat as forces attack out of the perimeter eliminating a police unit and a combat engineer is left high and dry as shaken eastern troops fleeing North from the battlefield. Once again the Soviets have isolated the Fort at the isthmus and its Rumanian defenders. This time however Totenkopf is outside the perimeter and a 5-7-6 inf xx approached from the rail line will even the fight.

Air combat: Approximately half of the Soviets Assault bombers fly Harassment missions to limit the Axis retreat and some rail hits are also attempted in the south, but an aggressive Axis air defence removes sufficient forces to render all 4 rail hit missions ineffective. While some Harassment missions are also deterred in all 11 hits are achieved across the entire front