Partisans: The ever-shrinking front means that only two hits are achieved this turn against Nazi rail lines.

Planning: Plans are formulated to air assault and amphibiously invade the neck of the Crimean Peninsula.

Finland and Norway: A long awaited attack is mounted near the Swedish boarder pushing back a 3-8 light regiment and isolating a mountain regiment in the borderlands.  Along the coast the Soviets move forces into place to assault the bypassed ports. This is needed to prevent a German landing in their rear.

Leningrad: The attack out of Riga is developed with two more attacks close to the city. The first a HX catches the German big rail gun as it is entraining and it is eliminated. The advance surrounds a two-division stack adjacent which is reduced to a pair of cardres following a retreat result. Due to ZOCs and lack of a 12:1 ratio neither remnant can be overrun in exploitation and the Soviets keep their mobile divisions stacked against possible reprisals from the powerful German armour in the area.

Two snap attacks are made farther east along the line resulting in an HX which cadres another division and an NE.

Moscow Front: On the Moscow Road a 15-10 pz is cadred by a direct 3 hex assault and a second attack eliminates a mixed scratch defence built around a 3-5 security unit.

In the centre in one of the most unequal battles of the war a 1-5 security regiment is wiped out by a 3 corps strong Tank Army. 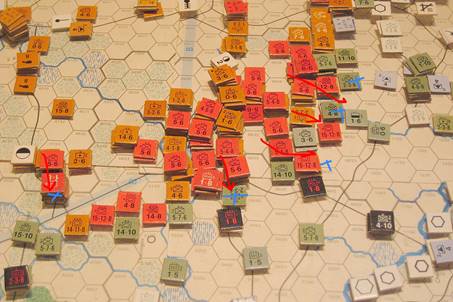 Stalingrad Front: The dash west continues in the centre with the scattered and disconnected Axis forces powerless to stop the surge. A more coherent front limits Soviet moves south to encircle Kharkov but the whole line from here to the Sea of Azov is assaulted by massed Soviet infantry and artillery formations with a stiffening of mech and tank corps.

In all 9 assaults are mounted along this Front. 3 inf xx, 1 Pzg xx and 2 Rum inf xx are reduced to cadres/eliminated together with some of the few remaining support units.

Makeevka is bypassed from east and west and is now surrounded on 4 sides. In this sector a 1-2-6 Eastern brigade is eliminated in exploitation.

In the Crimea a 14-6 Artillery XX and a number of Guards infantry cross the Kerch straights. The Marine brigade holding the beaches West of the Axis fortified isthmus is re-enforced from the sea by a 4-6 infantry division and additional naval troops with supplies.

Air combat: Some attacks require GS which is provided. A rail hit results from 3 missions in the north on the Riga line while north of the Moscow road swarms of Pe2s harass the retreating German infantry.

The Soviets do not have it all their own way. 3 Harassment missions are returned and in one notable engagement a mission comprising Guards Yak7B, Pe2 FT, Pe2 and a regular Yak 9D are all but eliminated by interceptors with a single Guards Pe2 returning to tell of the encounter.