Albrecht Schneider pushed away the timber and soil which had fallen into his foxhole and looked out over the rim of his protective defile. With his comrades in the 57th infantry division he occupied a position on the reverse side of the levy on the west bank of the Dnieper River approximately 15 miles south of Cherkassy. The dislodgement of part of his protective cover had been caused by a screeching bombardment of Katyusha rocket fire and some of the fresh recruits were still cowering in the bottom of the hole. From a year of dreadful experience Hans was aware that the Russians did not use these rockets for show and knew that it was vital to be back on station the instant the bombardment stopped. Raising his binoculars, he strained to look out across the fast-flowing water. The morning was typical of a Russian spring in the Ukraine; thick drizzle obscuring all in front of him.  This morning was particularly bad as the density of the air was increased by an early morning fog as a result of the warming ground and the constant miasma from the nearby streams and drainage ditches feeding into the mighty river.  Almost before he had focused the binoculars a dark shape loomed before him out of the mist. That was the last image burned on his retina as a Soviet sub machine gun from the pontoon raft in front of him raked his position. His now limp body fell backwards on top of his comrades struggling and scrambling in the mud of the foxhole to reach a firing position. The infantrymen of the 23rd Guards Rifle division had reached the West bank of the Dnieper. Within an hour dozens of small boats, ferries and heavy-duty timber rafts constructed by the 253rd Tank Engineer Regiment had ferried powerful armoured elements of the 8th and 9th Guards tank Corps across the river who rolled over the remaining positions of the stunned defenders. By the mooring of the next day they had secured a 10-mile perimeter and had begun digging in against the expected counterattack.

Partisans: Limited scope so only one rail hit.

Arctic Front: (1 attack); Advancing troops bring supplies which are now being ferried forward by the destroyer flotilla. Guards, ski and Artillery mass and attack the mountain redoubt which anchors the left flank of the axis line against the North Sea. The attack succeeds in dislodging the 3-8* mountain regiment defender off the mountain into Lakselva.

Leningrad Front: (4 attacks); The Soviets advancing out of Riga assault the SS 11 NL pzg xx cadreing it. They also reduce an infantry stack but further east two other attacks only achieve DRs against the foe.

Moscow Front; (3 attacks); Bobruysk is liberated in a frontal attack over the river which forces out the Pz cadre defender.

40 miles north of Kiev the fortified engineer stack is Exchanged and the Soviet survivors advance into the gap between the two branches of the river eliminating a fort in the process.

The main focus of the Soviets in this sector is, of course, the crossing of the Dnieper. A three hex assault is made against the bend in the river just SE of Cherkassy and a HX clears the Fort allowing an advance. Three Guards Tank Corps, a Guards Rocket Corps and accompanying tank battalions advance over the river securing a bridgehead on the West bank. Unfortunately, accumulated movement penalties prevent exploitation. 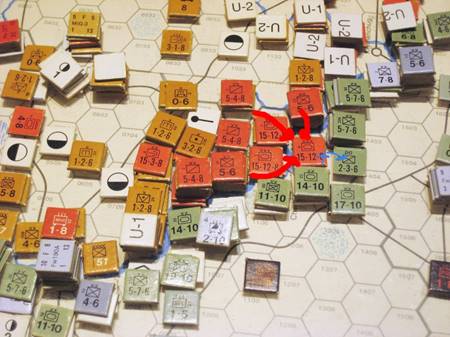 Stalingrad Front: (10 attacks including 4 automatic eliminations); The abandoned Defenders of Rostov are eliminated by overwhelming odds and in a series of attacks the various pockets along the south coast are eliminated and Mariupol captured. The Poltava pocket is reduced to a single stack of two infantry divisions.

The supply situation is poor in this sector for the Soviet forces which have outrun their Rail Conversion capability which was stalled for a time at Stalino. Thus forward units are now operating at U2.

Outside Kharkov Engineers and Siege guns arrive to assault the citadel next turn.

In the Crimea the forces moving north into the interior eliminate a 1-2-6 ET by overwhelming odds and a 5-7-6 inf is also completely eliminated in an Exchange with no retreat route.

Air Combat: Every eligible short and medium range Assault, Bomber and Escort fill the skies south of Cherkassy to support the crossing of the Dnieper.  Two Luftwaffe FW190s and a Hungarian machine intercept and attempt to bypass the Escorts. One is Returned and the other two lose sight of the bombing stream due to heavy rainfall over the crossing zone and fail to inflict any loss on the attackers. Intense AA fire fairs better Aborting 2 craft and Returning 4, but 23 2/3rd points get through exceeding the 18 needed to bump the odds to 5:1. With -3 mods due to a Fort and ATEC a HX result succeeds in securing the crossing.

The Luftwaffe fairs better in the north where an attempt to increase the odds against the line result in the elimination of a A-20G and Abort of a Pe-2B dropping the odds from the anticipated 5:1 to 4:1 and changing a DE to a DH.

Attacks 18 of which 4 are automatic eliminations for no loss.