Weather – No Change – Rain/Mud in A. The remainder Clear.

The Dvina line is now secure and looking like a 1942 line rather than a ’43 one. Full strength Infantry divisions fortified behind the river with panzers as fillers ready to counterattack any breach. This is as much a product of the Soviet’s disinterest in breaching this line as German engineering skills but does appear stable for the moment.

At Vitebsk the German forces have stopped the Soviets cold and last turn’s counterattack although very costly has halted any move south at this point.

In the centre of the front West of Moscow the line is buckling and no significant counterattack can be mounted. In the far south the mainly Rumanian army continues to fall back West, securing the Donets line.

The really telling action this turn which ironically signifies the decline of the Axis forces is a successful counterattack which isolates a significant Soviet force at Kursk.

The German see an opportunity to deal the Soviets a blow and counterattack from two sides. The attack is successful with two DEs and an opportunity to surround 3 fully stacked infantry armies. The thinning limes, the need to cover the retreat in the south and the need to man the Kursk Orel line to the north persuades the German panzers not to penetrate the Soviet line to any depth. They fear Soviet reprisals and just do not have the resources to mount a sturdy enough defence. So instead of a wall of steel a lone stug Battalion races into the gap to Isolate the Soviet advance guard for a turn.

Is this the swan song of the once proud German Army? Counter attacks will, of course, continue but it seems clear that the Axis forces are no longer in a position to mount and sustain any sort of major offensive and it determines if nothing else that the Soviets are now feared by the German armour who are moving rapidly to a defensive posture.

Army of Norway: Still inactive and stalemated but the Soviets continue to pour troops and Res Pts into the area – The question for German High Command is; Do they do the same? Or is this an unnecessary drain on resources? Narvik needs to be defended but does Northern Norway? The question for the moment remains undecided.

AGN: A few hexes on the north bank of the Dvina remain unoccupied ahead of the Soviet advance. the German forces take advantage of this and mount two spoiling attacks against lone Guards infantry units annihilating one and forcing another to cadre.

Along the VL/Kalinin line Axis forces counterattack a weak Soviet penetration of the line eliminating the spearhead.

The first bound of the retreat has reached the fortified line running through the Valdai in a SE direction and the occupants prepare to receive the Soviets who are relatively weak in this sector and unlikely to cause significant difficulties for the defenders.

AGC; A single counterattack against a Soviet penetration between Kursk and Orel forces them back taking heavy losses (DH) 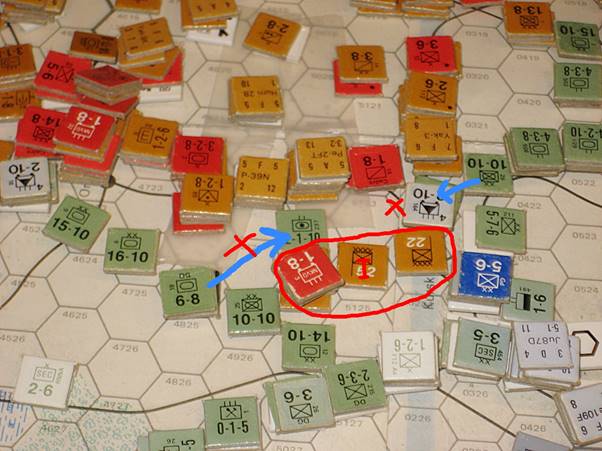 Just south of Kursk the German see an opportunity to cause the Soviet Advance a severe blow by cutting off 3 hexes of fully stacked infantry hexes and eliminating them in an isolated pocket. The glory days appear to be repeating themselves as both stacks are eliminated with only a 1-8 cav cadre surviving. The Panzers advance. In exploitation however a reality check forces caution. German intelligence has lost track of the powerful Soviet corps identified in the Voronezh region last month and last reported moving NW. The Axis realise they cannot interpose enough strength to survive a counterattack and more importantly the outer edge of the surrounded Soviets cannot be contained sufficiently to prevent them surging on regardless. Thus, reluctantly, the Axis content themselves with the losses inflicted and the likelihood of stalling the Soviet advance for another turn.

AGS: The rush West continues and for the most part the Soviets failed to pin many units last turn, so the move West is uneventful and swift. Rumanians with a stiffening of German infantry XXs hold the Donets. The Germans send a panzer division south to support the Rumanian 1st Armoured and where possible snipe at any Soviet advances. In fact, one such advance is attacked en-route annihilating a 5-6 Guards xx which has advanced too recklessly SW of Voronezh.

Air Combat: Not much to report. AGC orders 6 harassment hits to slow the Soviet advance Only one air loss (Soviet).