The rains which have now turned the dry earth to mud hamper the Soviet advance just as it was reaching a crescendo and the number of attacks fall dramatically this turn. Additionally, the value of the target hexes is lower. Still the steamroller continues to plough on into the Axis lines and though slowed shows little signs of stopping. The door swings both ways and the mud also affects the Axis ability to quickly retreat to their prepared defence lines. The Axis do have one advantage however which is that they are falling back towards their supply centres where the Soviets are beginning to outstrip the ability of their limited rail engineers to re-engage the rail lines and thus are in many places advancing to an out of supply position.

Finnish Front. Soviet forces launch two attacks in the Arctic this turn; one in the Petsamo sector and one in the Kautokeino sector both resulting in the elimination of the defenders.

Leningrad Front: A third attack against the fortified ring to the north of Riga results in progress with an exchange eliminating the fort and advancing the Soviets to the city suburbs

The main action however is directed against Veliki Luki and adjacent forts. Mech and Artillery concentrates and eliminates the opposition allowing the Mech units to advance and exploit beyond. This move threatens to trap a number of Axis mobile units north west of the city which are now out of supply. Other elements exploit directly south towards the river adjacent to Vitebsk compromising the defence centred around the marshlands on their right.

Along the line here around the curve of the Axis front to Moscow various attacks continue, albeit diminished in size and number, further pressuring the defenders.

Moscow Front: With the risk of counter-attack diminished in the mud Soviet Mech/Artillery concentrations are emboldened to advance through breaches from Moscow to the Bryansk latitude as a number of punctures are made in the Axis lines.  Aircraft flying over the battlefield further hampering the retreat of the mud mired troops and hinder the Axis response to the penetrations.

Between Orel and Kursk area the better German armoured concentrations still prevent significant advances being made. By contrast those units south of Kursk are diminished and in full retreat. 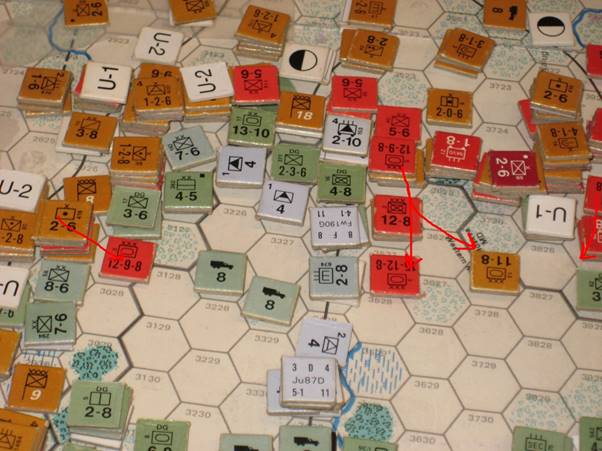 Breakthough in the rain: 3rd Guards Tank Army drives its mechanized Brigades through the Axis defences

Stalingrad front: All across the Stalingrad front north of the Donets the line continues to lunge westward harassing and attacking the Axis line which consist primarily of Rumanian troops.

(Contrary to earlier reports Hungary still is supports a small field army this consisting of a small number of Security divisions in rear areas.)

Air combat: The usual small-scale engagements occur across the front most missions comprising ground support and harassment. The pace of the advance in the south has resulted in limited air cover. In one notable engagement in the Vitebsk region a flight of Fokker Wolf 190s returning from an interception of a rail bombing mission are jumped in the twilight by an elite night fighter squadron of Pe 3M’s and are eliminated.