1943 OCT I Analysis: The Soviet Summer Offensive 1943 -Success or Failure?

With the end of the summer campaigning season it is time to analyse the success or otherwise of the Soviet 1943 Summer Offensive.

This can be Judged against three criteria:

Its own objectives: When judged against the objectives set the offensive has been a failure. The plan called for a southern pincer sweeping through Orel to Bryansk and onward to Smolensk. A secondary objective was the capture of Kursk to protect the left flank.

Simultaneously a northern pincer was to sweep through Veliki Luki, Vitebsk and then on to Smolensk. A secondary objective was the screening of Riga and the Dvina to protect the right flank.

The attack has not maintained the pace of the Soviet planner’s expectations, so the Summer Offensive judged by this criterium has failed.

But why did the Soviets fail in their plan?  The objectives were optimistic and underestimated both the ability of the Axis to maintain a fortified line by feeding replacements into the line and more particularly the mobility of the German armoured force which was well deployed into kill squads behind the lines. On countless occasions these forces were able to concentrate and nip off the Soviet advances.

Throughout the crucial earlier period the Germans maintained their armoured forces and have rarely had a Panzer division completely eliminated and never, even now, had one in the replacement pool (although there are many cadres in play.) Only in the later turns when the infantry forces had been so stripped away that the Germans are forced to place their armour in the front lines on a semi-permanent basis has real progress been made. Only now in the twilight of the offensive have the Soviet forces been bold and strong enough to take on the mighty panzers on an equal footing.

Regarding the Russian tactics; In the north the generals kept the armour slaved to the large artillery formations and progress was slow but steady. The first breakout was possible due to a tactical error on the part of the Axis forces. A second small tactical advance was cut off. (But the rescue of the isolated pocket was successful, and a double stacked panzer force reduced to cadres in doing so). The third and final advance is now mired in the autumn mud.

Losses in the main armoured units has been very low as a consequence of this cautious approach. It could be argued that the Soviets missed an opportunity to cross the Dvina in force when the Axis troops were in retreat and vulnerable. But this opportunity came just after the southern forces had taken a similar opportunity and been soundly defeated in doing so and caution prevailed. (This was also against the plan and doctrine).

The Soviet plan in the south called for the annihilation of the German front line in the first couple of turns and exploitation beyond by the armoured forces. The Axis, however, were able to hold the Soviets at the original fortified river line for many turns by the aggressive use of Panzer Corps organized into kill so that the few advances the Soviets made were quickly rebuffed.

Only when the secondary flank of the defenders collapsed were the Soviets able to make any real progress where advanced elements exploited and eliminated the unguarded fortified line between Kursk and Orel. This operation however resulted in the encirclement and loss of some tank corps but did provide opportunities for the Soviets to secure the early first stage objectives.

It was this point that the Soviet plan for the South went awry. Desperate to repeat the earlier success they were tempted by the possibility of exploitation overruns away from their principal axis of attack and instead moved south of the B/C Weather Line west of Voronezh.  The prospect of some cheap overruns of secondary units blinding them to the strategic cul-de-sac they were moving towards.  This surrendered the pace of the attack and resulted in the armoured forces being out of position and subject to another strike by German armoured units. Whereas subsequently an equivalent number of German units were reduced this whole diversionary attack proved an unnecessary drain on the impetus of the main drive at a time when the Axis line was weakening. Only in the last couple of turns when the Soviet mech and armour corps returned to their principal axis of advance has the southern wing of the offensive regained its pace and allowed the Soviets to be approaching Bryansk. This sideways move cost the Soviets four turns and while it would be overly optimistic to say the objectives would otherwise have been met it is fairly certain they would have been more advanced possibly holding Bryansk.

Overall the northern forces cautious steady approach has achieved a similar pace to the southern wing which has been a more start/stop affair.

But reference to what may have been an overly ambitious plan is not necessarily the best way to judge the success of an operation.

Losses Inflicted: Since the start of the offensive the Axis forces have suffered 907 points worth of losses against the Soviet losses of 637 points a loss ratio of approximately 1.4:1. Most of these losses have been in infantry but the Soviets have latterly been able to take on the German armour in direct attack and as a result the Axis forces are in general retreat across the majority of the front.  I have no other game data to judge this result against but the equivalent periods of 1940 and 1941 give results of 103/1057 for a LR = 0.1, and 354/738 LR = 0.48 respectively.

By a Loss Ratio Criteria therefore it is clear that the offensive has brought great benefits in terms of the balance of power and has confirmed that the tide has well and truly turned in favour of the Soviet forces.

Geographical Changes: Moscow is now wholly owned by the Soviets together with Kalinin and Voronezh. In addition to the primary objective of Orel. Both secondary objectives securing the flanks have been achieved including the capture of Kursk.

The Soviet Offensive has recaptured a large swath of territory. In June 1943 the front line ran along the line Narva, Pscov. North of Veliki Luki following the E/W track through to the forested crossroads at the NE tip of the Valdai, then south through Kalinin, Moscow, to the river south to East of Orel. It then turned E/W to just north of Voronezh (newly captured by the Axis) and then followed the line of the Don to Rostov.

Now the line runs from Riga along the Dvina to Vitebsk then a rapidly contracting arch /bulge between here and Bryansk then south to the Kursk region. South of here again the Axis line is in full retreat where it is rapidly moving West to Kharkov and the Donets.

Judging by the forces moving into position it is apparent that the Axis are seeking to stabilise their retreat on the line Riga. Vitrebsk, Smolensk. Bryansk, Kharkov, River Donets, Rostov although the later section may need to fall back to the pre-prepared Stalino line dependent upon the force strength that finds sanctuary over the river.

This will effectively give the Soviets their objective line with the bonus of the Don bend but without the propaganda victory of a great encirclement or the ownership of Vitebsk, Bryansk or Smolensk.

As we have seen, whilst not part of the plan the pushing back of the front to Kursk and general thinning of the Axis line has obliged the Axis to pull back AGS from the Don to the Donets and this will present opportunities for the Soviets in 1944 with a possible move on Kharkov or Rostov although planning for next year’s offensive is still a long way hence.

Currently Soviet plans for 1944 are not firm and will not be formulated until the spring of next year when the strategic situation will be clearer however given the pace of the advance in 1943 and the distance required to reach German homeland and that of her allies it is clear that the progress of the Soviet forces will need to be maintained throughout the winter months. The attacks will therefore be continued but on a broad front approach with the aim of eliminating units rather than specific geographical gains. The progress of these winter attacks will thus determine the offensive plan for the summer of 1944.  (One side operation being considered is an amphibious attack on the Crimea now that the Black Sea Fleet has been rebuilt.)

Whichever criteria however we decide to judge the Soviet Summer Offensive of 1943 the offensive has confirmed that the tide has well and truly turned in favour of the Soviet forces and that it is not a question of if, but when, they will enter Berlin. 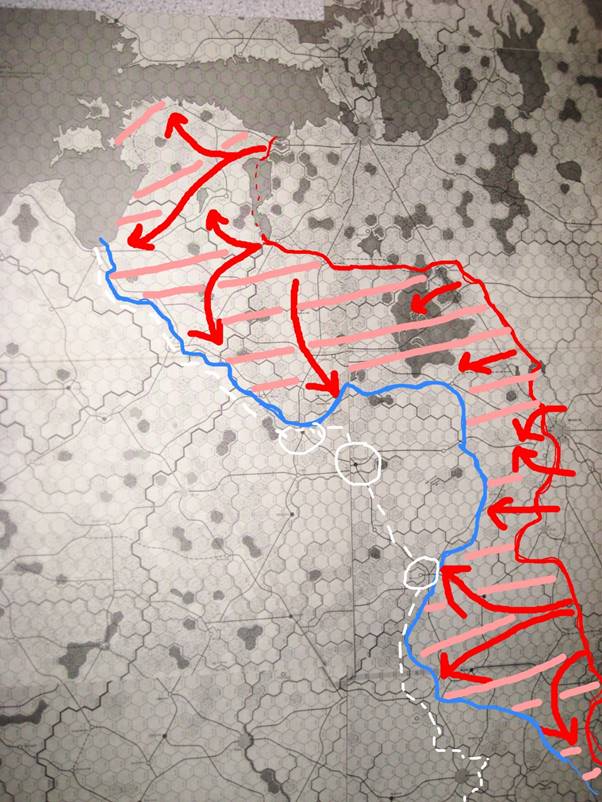 The Soviet Summer Offensive Jun I 43 to Sept II 43