A huddle of grey-green coated figures cluster behind a Tatra truck wallowed up to its axles in thick cloying mud, moving agonisingly slowly across a bleak, rain soaked, landscape.

Schmitty added his shoulder to the tailgate and gave an almighty push along with others in his squad. They had been dragooned into helping a detachment of the 674th Combat Engineer Regiment shift their trucks and equipment onto the only metalled road in the area. Currently they were trying to persuade a heavily loaded “Prime Mover” to actually move at all down a muddy rut that passed for a side road in these parts.

As Schmitty strained, the driver gunned the accelerator. The birch log placed under the back wheels to give traction failed in its intended purpose and instead was propelled backwards cracking Schmitty on the shins and sending him facedown into the mud with a thud. “You green horn dummkopf” he yelled.

His painful cry was masked by a deafening roar screaming low over the rooftops of the village they’d vacated a half hour earlier and yet only some hundred yards behind them. The aircraft with its red stars clearly visible raked cannon fire over and through the squad and the road ahead. Two bombs detached and, as if in in slow motion, drifted earthwards. Before really taking in what was happening a deafening explosion impaled a searing chunk of white-hot metal into the tailgate above Schmitty exactly where his head would be had he not been knocked to the ground. That dummkopf had saved his life! Not so fortunate the engineer in charge of the operation who lay crooked and broken in the rain-soaked earth his blood and entrails oozing into the muddy rut caused by the truck’s passage.

As the aircraft’s roar turned into a distant drone coherent sound returned to Schmitty’s consciousness.  With a callousness born and nurtured by two and a half years of total war Schmittys’ sergeant, recovering first from the shock of the encounter, barked “Okay lads, shows over, back to work;

Finnish Front: The Soviets launch a low odds attack from the heights east of Kirkenes and capture the port in a HX result. German transports flee and all make it out to sea. The Axis in the area will now need to yomp West along the coast road to reach safety.

Leningrad Front: All quiet from the coast to Vitebsk but here the Soviets launch another massive assault and widen their bridgehead on the south side of the river east of the city.

From here west and then south the Soviets pursue the remnants of the collapsing Axis line harrying the fleeing troops by land and from the air. Numerous attacks are made although the total replacement point loss is low as most defenders are reduced to cadres and much of the attackers are at a U2 supply state and not able to directly assault larger units/stacks.

Moscow Front: In the north of this sector Soviet mobile forces continue to push west along the Moscow Highway and then hook north isolating a Pzg Cadre and Construction unit and threatening larger forces to the north with isolation. They are emboldened by the lack of an effective response capability of the German Panzer force and the massed ranks of comrades moving West behind them. 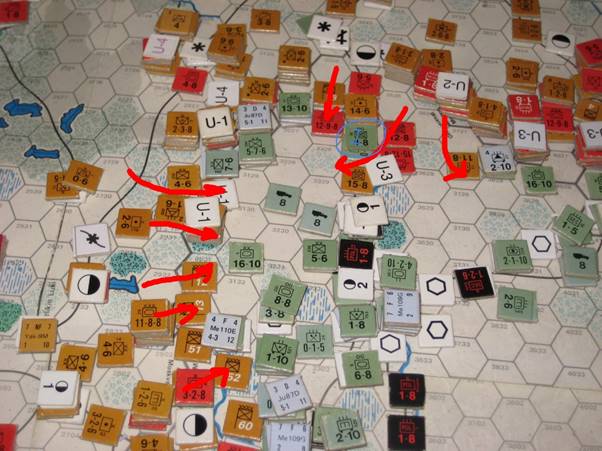 In the south the forces are forming up against the established Axis new MLR in front of Bryansk. A set piece attack brings the Soviets adjacent to the city but mech forces hold back to be in supply next turn. West of Kursk a set piece attack Exchanges against a mixed infantry/armour stack. Meanwhile here as elsewhere Rail Engineers frantically re-gauge lines to keep pace with the advance.

Stalingrad Front: With only a single rail engineer moving south along the Kursk/Stalino  rail     line the forces here must content themselves with rounding up a lone Rumanian division and Combat AA stack trapped at Valuyki.

Air Combat: Still little activity as Soviet engineers await supply to begin a new phase of airfield construction. Long range bombers based mainly around Leningrad decline missions to preserve their strength while the IL3ms at Moscow find themselves out of range of targets so some transfer south to the Stalingrad front to support any future move against Rostov. Medium range assault aircraft run Harassment over the Axis lines moving west north of the Moscow Highway. Here however successful interception by two flights of ME109Gs against a pure Guards mission bypass the Mig3 screen with ease and penetrate the assault bomber stream aborting both bombers.