STAVKA decides it can wait no longer to launch the Summer ’43 Offensive. Almost all formations are in place and Partisan bands and locals are reporting a build-up of enemy defences and have identified at least 4 assembly areas for powerful enemy mobile forces. The meteorologists predict with 100% certainty clear, dry conditions in the south and are 85% confident that the northern rains will cease within the next 2 weeks. With this assurance the Soviets feel they have no choice but to launch the attack……..

The 1st Tula Shock Army commander, Georgy Konstantinovich Zhukov climbs up the steps provided onto the front deck plate of a T-76 main battle tank. For the benefit of the cameramen and news film crews he stands in the centre of a crescent 50 such tanks; machines capable of beating all but the most recent models of the enemy. Batting away the megaphone offered to him by an aide he turns to face the assembled tankers and infantrymen arrayed before him.

His deep heavily accented peasant voice bellows out across the step

“Comrades, the moment we have been waiting for has arrived. Today we take our rightful vengeance against the fascist invader and his lapdogs!”

“We fought them on the borderlands, we fought in the forests and the hills, in the swamps, on the plains and on the landing fields but we did not surrender!”

“Do not deceive yourselves, this will not be easy, and we have many months of hard fighting ahead. This is not the end, that will not occur until we place the Red Flag on the ruins of the Reichstag. This is not the beginning of the end, that will not occur until our tanks cross the borders into the enemy’s heartland. But this is the end of the beginning for comrade Stalin has decreed that we will not take one more step back. Now we take the fight to the oppressor!”

“Obedience to our glorious leader, Stalin, and devotion to the Motherland will secure us the victory we deserve.

So, comrades, start your engines, place one more round into the breach and cry havoc for Stalin and the Motherland!”

Partisan Attacks: Are ramped up to cause chaos in the rear of the enemy and 6 hits are inflicted on communication lines.

Finnish front.  Despite the massive commitments of arms further south the Soviet army finds enough capacity to rail reinforcements and Res Points north to prepare to reduce the Murmansk pocket. To the West the line slowly advances north towards the Norwegian border 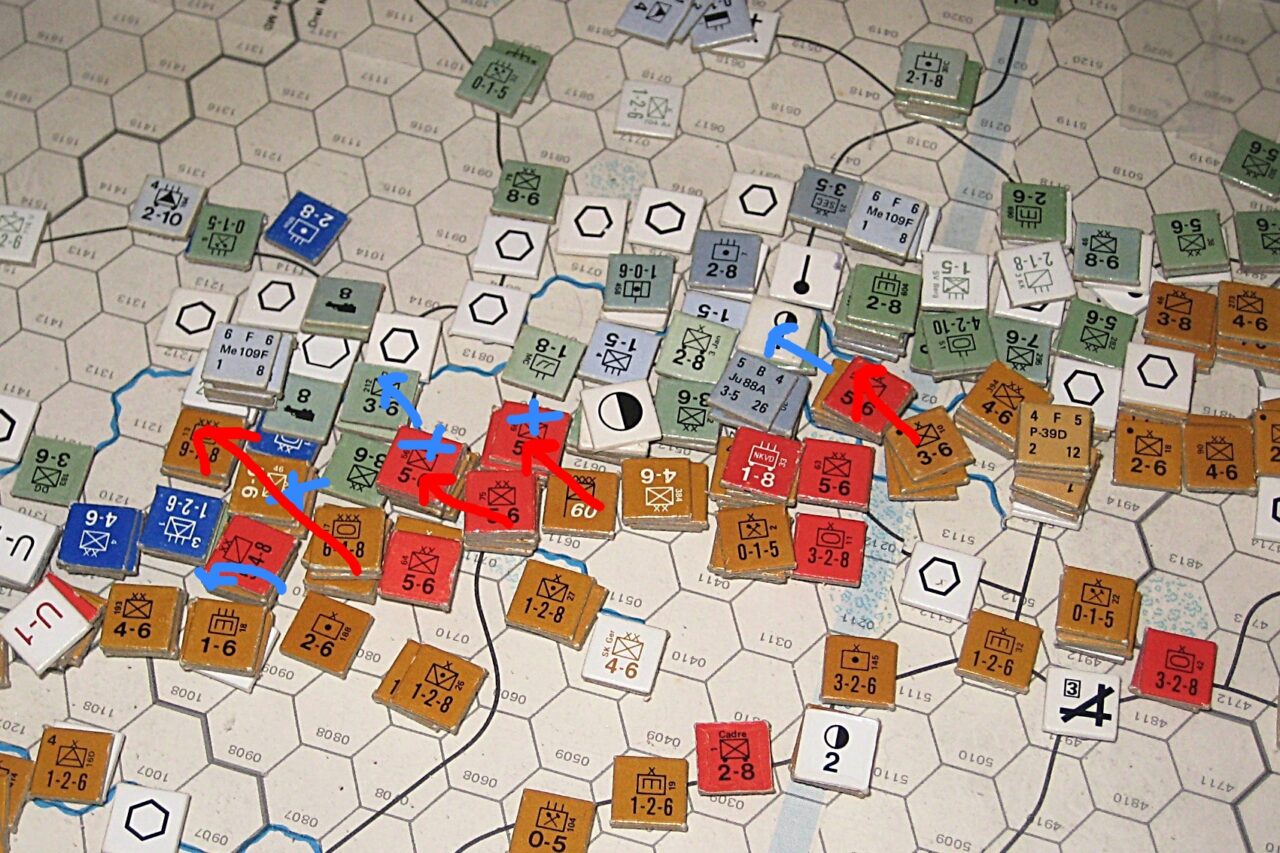 Leningrad Front:  Narva Sector. – The central German Hex, a 7-6 inf XX in swamp is assaulted with a combined arms force of artillery, Guards infantry and armour. The division is cadred and falls back. Due to the mobility limitations of ZOCs, terrain and mud no overrun is possible.

Pskov sector; The German line running north/south is hit in 2 places, a 5-6 is unseated from a fort but retreats in good order, just south of this action a 7-6 inf xx is cadred and the fortified position overrun. The mech forces are still wallowing to the rear in mud and cannot exploit.

Veliki Luki Sector; A 16 mile advance is made down the main rail line south and a brave stack exploits to occupy the vacated fort left by the two retreating 7-6 inf XXs.

Kalinin Sector: The probing/pinning attacks continue north of the city and two parallel 16 mile deep incursions are made into the enemy lines. 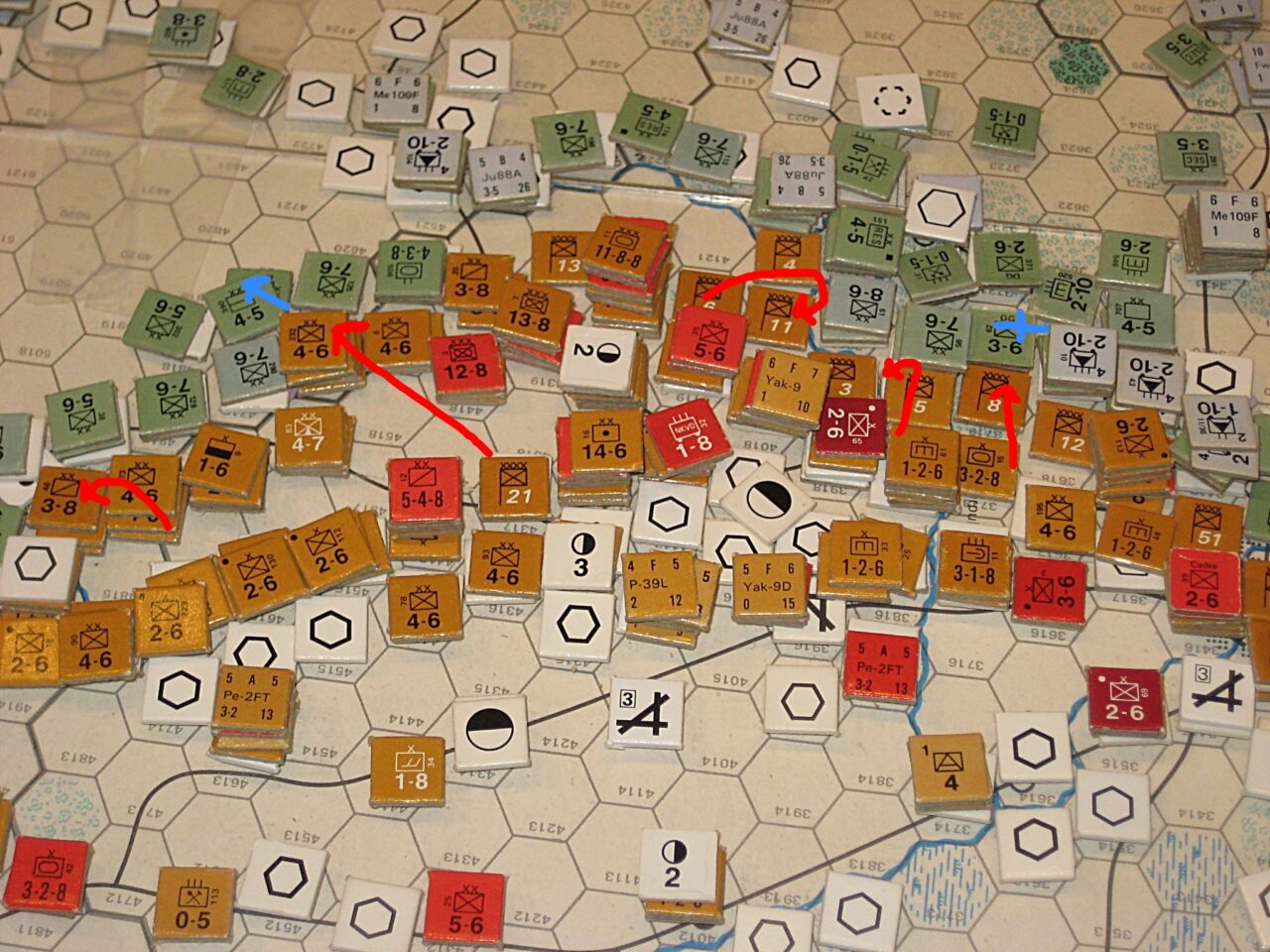 Moscow Front; Northern Sector; Just north of the city a pinning attack unseats a fortified position and pushes unto the German lines threatening the left flank of the Axis’ last toehold in the metropolis.

Central Sector: The right flank of the main southern thrust moves west and north and conducts a three-hex assault against the riverine defences south of Moscow. While the left flank moves to contact and attacks before the artillery can be properly registered the right has been in contact with the enemy for months so attacks at full force. In the central hex swarms of Stormaviks blacken the skies and fighters clear away any opposition from the Luftwaffe increasing the odds by one column. The central attack is launched first with the right and left flanks following a day behind. The German defences; fortified, behind a river and manned by front line infantry divisions hold firm denying the Soviets their river crossing. Only on the extreme right flank is a fort captured at some cost (HX) widening the breach begun last month.

Southern Sector: The Army Group tasked with the capture of Orel is slowed by the mud and neither the artillery nor armoured units are able to contact the enemy line, moving as they are across the widest area of no man’s land of the entire front. On the southern flank, however, the fortified line is attacked in two places by second line infantry units; it bends but does not buckle only one fort is eliminated with the defenders retreating away in good order. 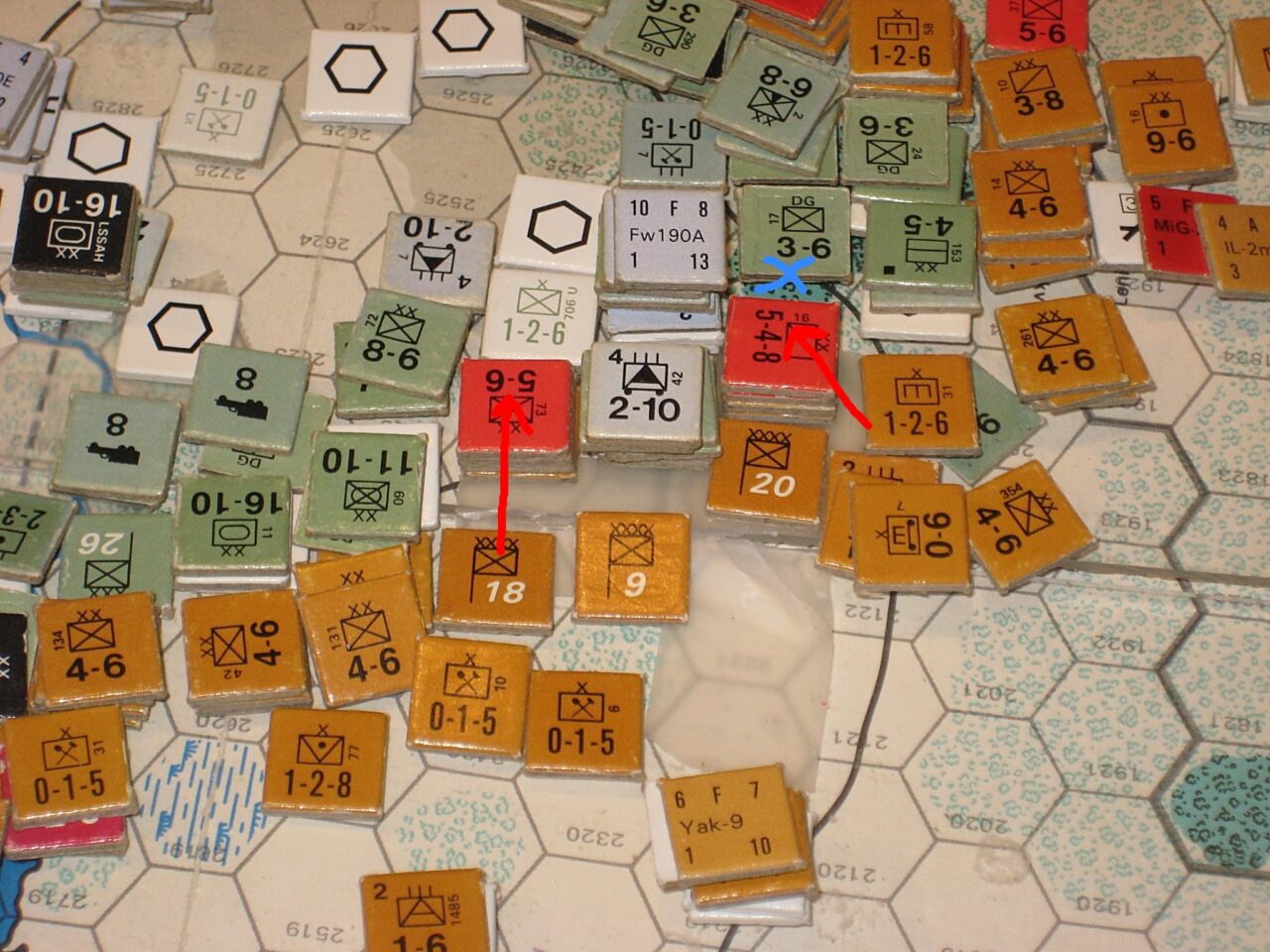 A direct assault towards the city from the North-East along the narrow peninsular between the flanking rivers pushes back the Hungarian defenders and brings the Soviets once more to within view of the city suburbs.

South of the city the drive to the Don is sustained.  The Axis line, weakened by months of attritional warfare, breaks, allowing a one hex exploitation by two tank divisions. 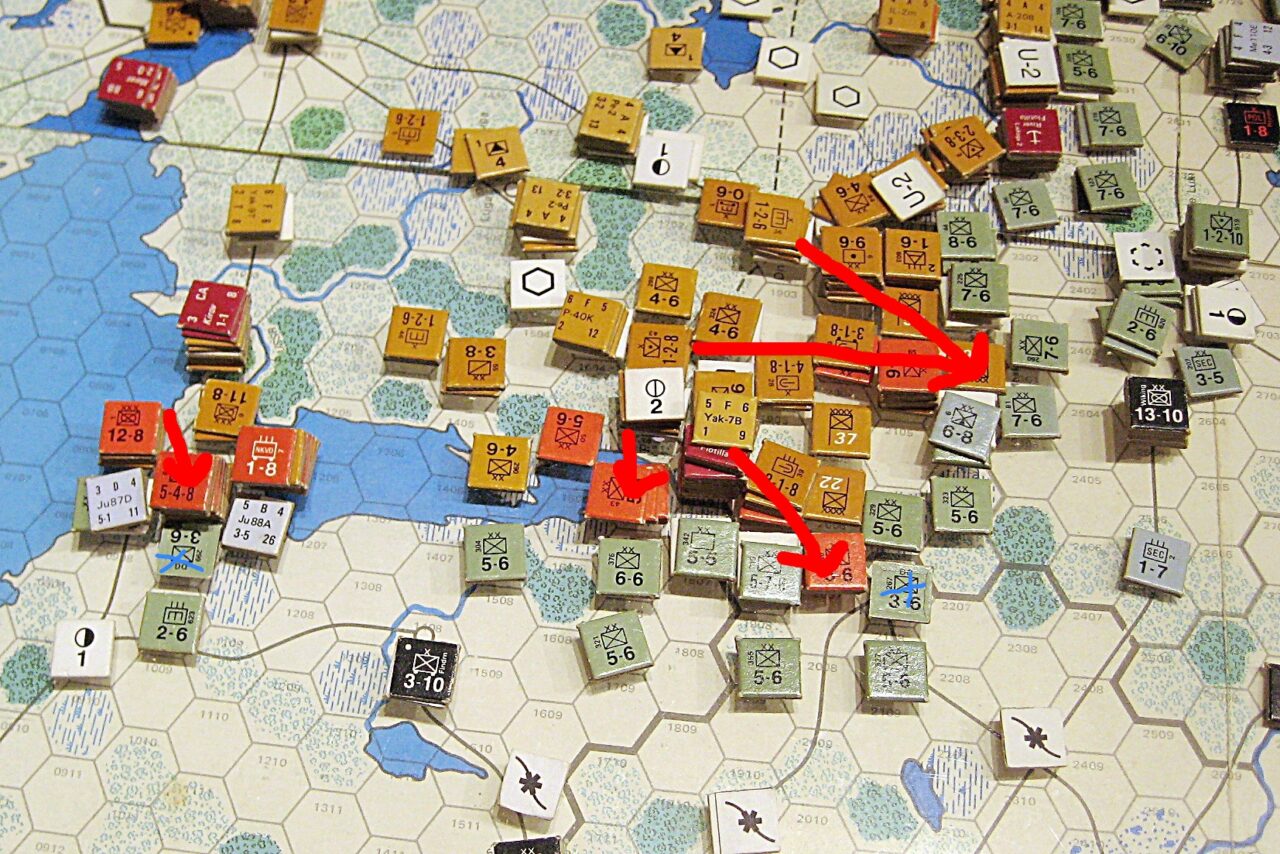 South of Moscow the Luftwaffe makes a rare appearance here to try to deny the Soviets an odds shift against the central defended hex but strong fighters drive them off sufficiently to allow the attack to be enhanced at a cost of one aircraft. Elsewhere a mix of railine bombing missions and some DAS complete the air operations for this turn.