Soviet Plans for the 1943 summer campaign

Previously undetected the Soviets have been building forces and biding their time awaiting the advent of clear weather to launch the first major summertime offensive of the war.

They are frustrated and alarmed at the continuing wet weather, for every week that passes increases the chance that their plans and preparations will be detected by their Axis foes.  Only the overconfidence and arrogance of the Fascists has saved them so far. The rains have also enabled the Axis to complete their Voronezh operation and the army must press on with the attacks south of the city to pressure and thin the Axis forces and try to minimize enemy redeployment. The commander tasked with the defence of the city has not been seen for some time at STAVKA.

The Soviets review their plans. The Soviets have amassed vast forces in the region of Pskov /east of Lake Piepus for the northern pincer with a second massive force at Tula for the southern pincer. . The plan is to break through the German lines with massed Guards infantry and artillery divisions and rocket regiments. A second echelon of armoured units and motorized rockets where available will exploit any breaches. The main lines of march are as follows; For the Northern force this is Veliki Luki-Vitebsk- Smolensk; and for the southern force; Orel- Bryansk-Smolensk. The intention is a meeting in the region of Smolensk. 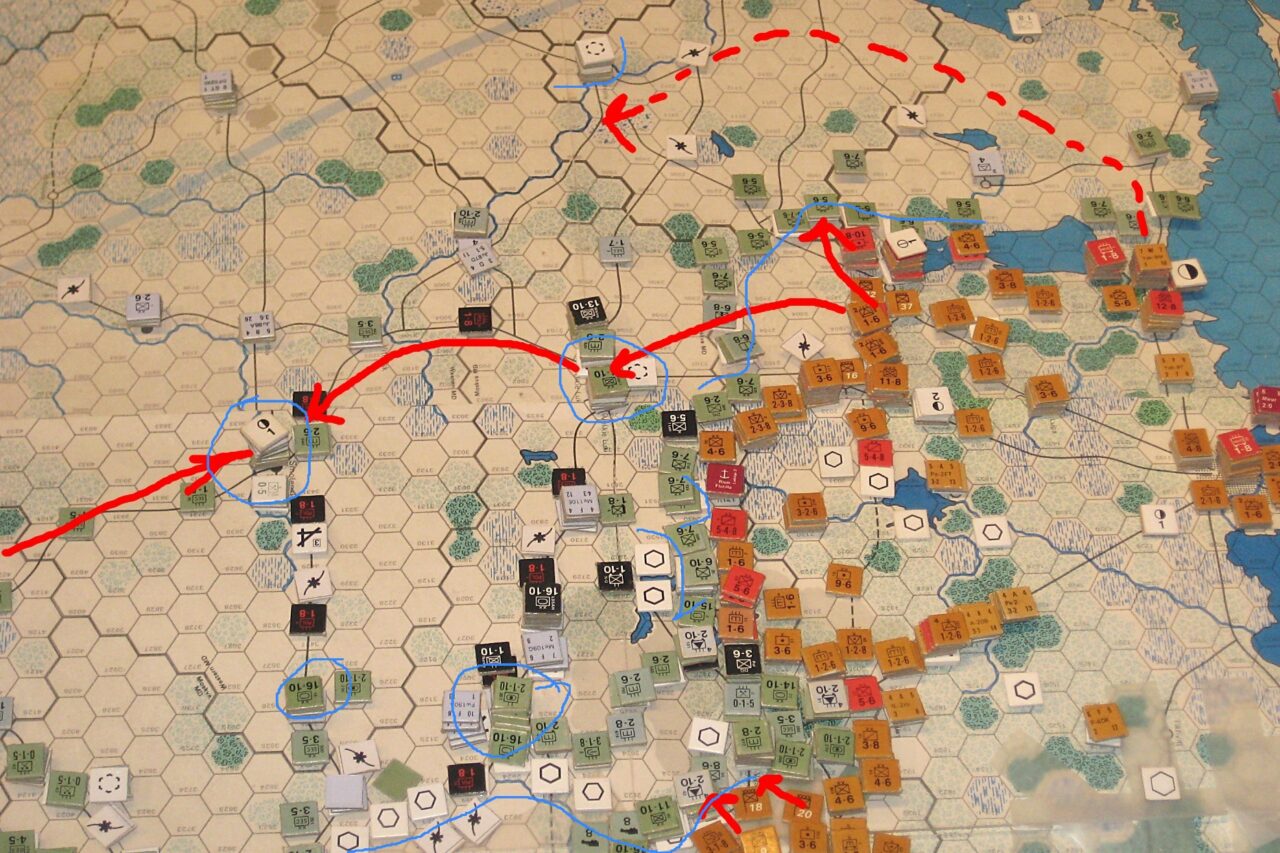 The Soviet plans for the summer offensive 1943

Secondary outlying thrusts will move from Narva through Estonia to Riga protecting the right flank of the southern force and securing the east bank of the Dvina. In the south a secondary thrust from Tula in the direction of Kursk will similarly protect the left flank of the main thrust to Bryansk. Across the front forces will move to connect with the Axis defensive line to pin forces and inhibit lateral movement of the enemy troops and wherever possible low odds pinning attacks will be stepped up against the enemy main line within the area of the intended pocket. Should the plan succeed, fully one third of the Axis force will be held in the resulting pocket.

The attack south of Voronezh will continue and will menace the Don river line ensuring little interference from the Rumanian, Hungarian and Italian forces in this sector. 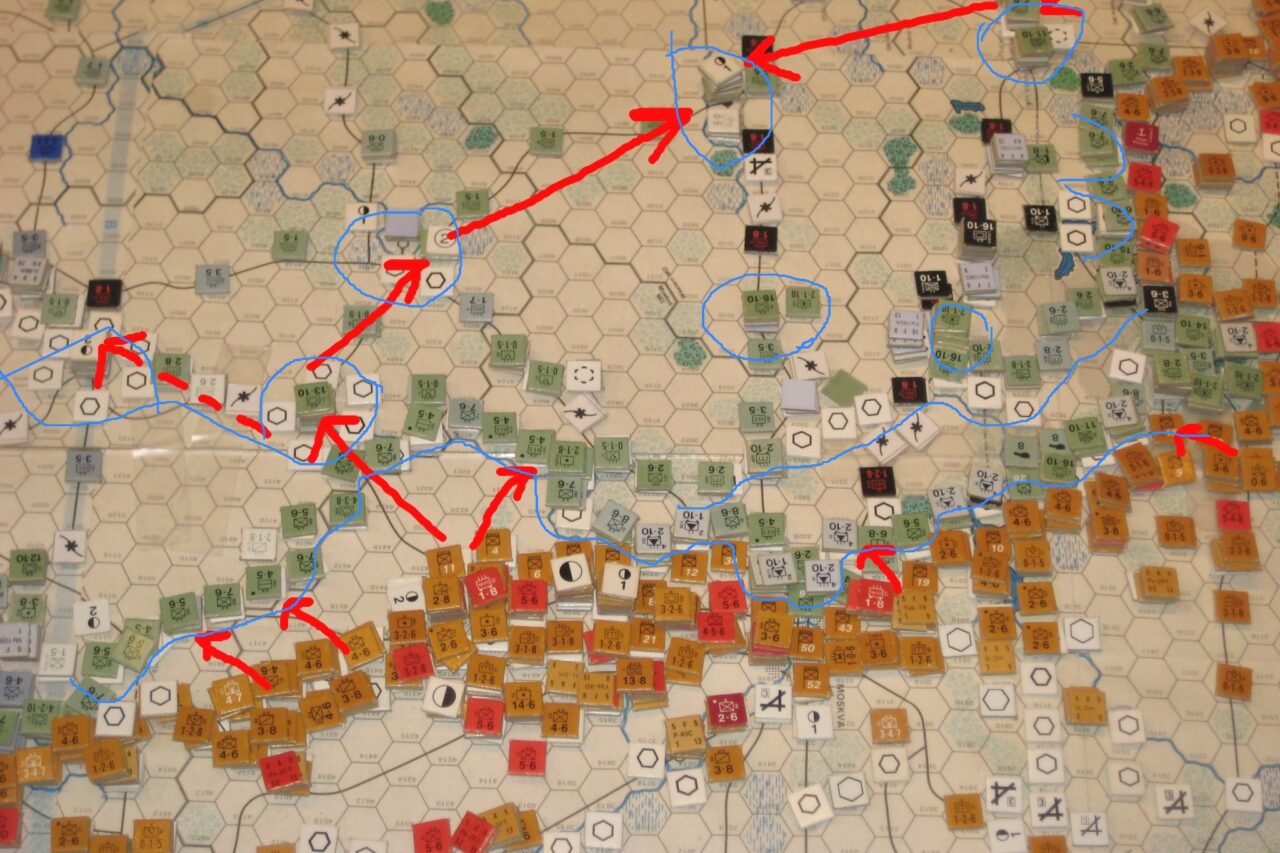 The Soviet plans for the summer offensive 1943 – Southern Front.

Axis Plans for the 1943 Summer Campaign

Taking advantage of the Fluhrer’s quiescent mood following the defeat of Finland a heated debate with a cabal of the most competent Officers at the Wolf’s Lair lead by Erich Von Manstein persuade Hitler to call of his planned summer offensive and take a reactive, defensive stance on the Eastern front. They point out to the success throughout the spring of strong fortified defences, of giving up ground slowly and grudgingly, and then destroying the advancing Soviets with local counterattacks. This they extol can be used on a grand strategic scale until the enemy expends all his resources and reserves and will then be ripe for the final Coup de Grass. With this in mind they use the extra month the unseasonal rain has given them as the breathing space needed to redeploy forces from the concluded Voronezh operation.

The Axis expend an additional resource point to boost rail capacity and transfer numerous panzer divisions to assembly areas behind the front lines.  One Corps on the Latvian/Estonian border, one at Veliki Luki.  Two more, one on each rail line, directly west of Moscow and a force at Kursk with a Bryansk force to be formed when reinforcements and replacements allow.

These reserves are intended to cut off and isolate any Soviet breakthroughs through the mainly fortified frontline. The weaker northern front line is supplemented by infantry replacements and reinforcements and furious fort building activity continues in the region of Veliki Luki, Smolensk and Bryansk with secondary fortified lines being completed behind Moscow and the Valdai. The latter to enable withdrawal to that line should Moscow or Kalinin fall

Finnish front.  With no Resource Points west of the main Karelian rail line forces moving on Norway spread out and attempt to infiltrate through to the coast. Around Murmansk it is clear to the Soviets that they will have to amass xx, x and artillery in every hex to have any chance of breaking the German mountain divisions defending the city perimeter.

In the south garrison and anti-partisan forces are deployed to hold the captured territories.

Leningrad Front:  Forces move into their assembly points and jump off positions ready for the predicted dry weather at the end of the month. The continuing mud places a section of the front at U2.

In the Kalinin sector a stack of the enemy is pushed back with air support and a 18 point stack advances threatening to cut off the northernmost two German hexes.

Moscow Front: North of Moscow the fortified enemy line is assaulted at 3:1(-1) = AR but NKVD troops ensure that the failed attackers hold their ground. South of the metropolis an attack against the German lines smashes a fort and allows a 21point stack to penetrate the Axis line.

Voronezh Front: Russian forces continue to pressure the Axis lines to the south of the fallen city of Voronezh with the intention of regaining the east bank of the Don. Three attacks are launched against the mixed Axis forces reinforced with German units, resulting in a Retreat each and a DE against a stack cadering a German 7-6 xx. Still however a meaningful breakthrough by armoured units fails to materialize.

Air Combat: Once again the VVS concentrates on rail bombing and raids succeed in inflicting a total of 5 hits. A furious air battle develops over the Kalinin sector attack as the Luftwaffe tries to deny the Soviet airmen the skies over the battlefield. The resulting combat between 10 escorts and 9 interceptors results in 12 downed Soviets machines and 3 aborted while the Luftwaffe suffers one elimination and 1 abort.