The door to the billet crashed open, waking the sleeping occupants with a start. The large bulk of the tank commander filled the door. Silhouetted by the low early morning sun he cast a long shadow down the length of the room.

“Hands off cocks!”, he bellowed, “Hey Yuri, wipe that smirk of your face Its the last time you’re going to park your tankette in the baker’s daughter’s garage for a while”.  “Grab you gear, you’ve got 15 minutes before we roll – this is the big one lads, the wait is over. Now we give fritz a taste of his own medicine!

10 minutes later Yuri lowered himself down into the driving position of the T-34, started the 500hp engine and tested the drive controls. The commander sat in the “pirozhok” above and to his rear. Both were waiting for the signal, Yuri caught sight of the flare from his vision slit and slammed the T-34 into gear. Lurching forward the machine kicked up a shower of stones leaving a billowing dust cloud in its wake from the dry earth.

They had been billeted behind the front lines for three months, much longer than expected. The newspapers and official reports spoke of victories at the Front but Yuri had been around long enough to know that all had not gone strictly according to plan and he had witnessed for himself the horse carts moving back east carrying the streams of wounded and the panniers of the dead.

He paid silent tribute to the courage and determination of his comrades in clearing the way for his tank and the many others like it which now moved rapidly west across the steppe. They soon were passing over the remnants of the enemy positions, a network of earthworks and fortifications which had been built up over the last six months or so. Churned and pounded to rubble by the artillery and assaulted by infantry and rocket fire the fortified zone now resembled a lunar landscape. The drop down into ditches and climb up over mounds, passing dragons teeth and logs sticking out at crazy angles and rolls of tangled barbed wire which they crush beneath their steel tracks. Soon they are clear of the erstwhile fortified zone and back on the level. Charging between small groves of trees set in fields of rye and winter wheat they catch up with the enemy a few miles later. A rudimentary rear-guard proves no hindrance to their advance as they charge onwards catching many units in column and crushing all before them leaving a trail of death and destruction in their wake.

Eighty miles further on they met the only nest of resistance on the route so far when they came across a small village where the remnants of shattered German infantry division had decided to make a stand. The desperate foe had taken up residence and fortified the hamlet as best they could with logs, carts, some wreaked vehicles and the bodies of their dead comrades. As Yuri’s tank approached the village the commander suddenly screamed “Panzerschreck right”.  Instinctively Uri pushed forwards on his left stick and pulled the right towards him pivoting the tank to face the oncoming threat. To his great relief the trail of smoke passed off to his left and impacted a small group of trees to the rear. Before his commander could give the order to load and fire a return shot the small building from where the smoke trail emanated exploded showering them with the timbers, plaster, thatch and the remains of the recent occupants. One of his fellow tankers had taken the shot. The enemy had no appetite for anymore of such an unequal fight and the survivors, their hands held high, shuffled out from the remaining buildings, ditches and hastily prepared barriers. Soon they were rounded up and passed back down the line to the security guards and a fate only marginally less certain than the one they had just avoided.

“Ok lads” said the commander that’s enough for one day. We are to form up with the rest of the platoon and spend the night here. After all it is only fair that we give our infantry boys a chance to catch up!

It has been a great day for the motherland, now get some rest, you’ve earned it!”

Finnish front. The Soviets continue with their operation to retake Murmansk. Two attacks are launched with assistance from air power most by long range IL4s flying from Archangelsk. Another Mountain division is eliminated whose cadre has no retreat path and is lost. The second attack fails to make progress (NE).

Leningrad Front:  Narva Sector; Three attacks designed to break out the Mech/Tank units fail in their intent and accumulated MP costs prevent any meaningful exploitation despite a HX and DH result inflicting heavy losses on the German defenders.

Pskov Sector; Two DEs from 7:1 attacks inflict losses and eliminate a fort but with no armour and the presence of strong enemy tank formations in the area only one advance is made.

Veliki Luki Sector: The attack on the “shoulder” of the previous hole is successful in widening the breach in the fortified line covering the main rail south. A second attack from the swamps unseats an infantry division and the consequent advance places another fort in a exposed position. The Soviets expect it will be abanded so the occupiers can keep their flanks in contact.

Further east the newly supplied defensive line strikes back in revenge for recent losses retreating an infantry unit and the victors advance towards the east/west rail line from Veliki Luki.

Kalinin Sector: The grind west continues and like a slow-motion car crash the Soviets bend and buckle the German line and cadre a 7-6 inf xx in a DH result.

Moscow Front; Northern Sector; Just north of the city the attack continues pressing forward and threatening the whole Moscow defence. This is an unsung advance without the dash and flare of armoured conflict but just as effective as the NKVD presence so far deters a riposte.

Central Sector: The right flank of the main southern thrust presses forward with a infantry/artillery attack but a HX drains strength and only a token advance to restrict enemy mobility is made. The units are not expected to survive the Axis’ next combat phase.

The Axis have made a tactical error on the approach to Orel where a 14-10 panzer/6-8 light inf division occupies a corner fort which can be assaulted from 3 sides. The Soviets mass and a HX at 5:1 (-1) cadres the occupants and takes the fort. 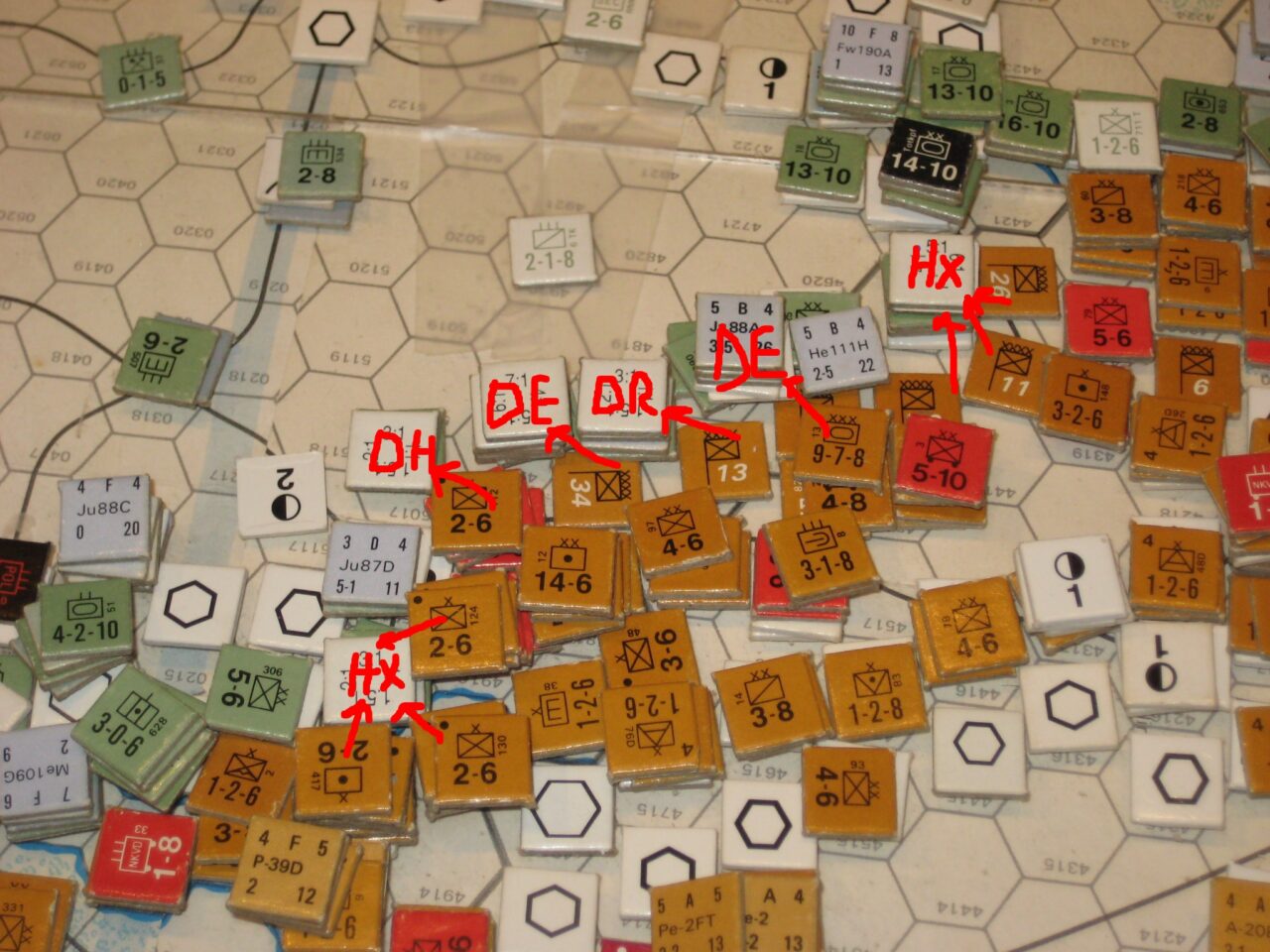 The Desctruction of Army Group Center

Southern Sector; BREAKOUT!. What began as a holding action against the fortified line linking Orel to Voronezh becomes the focus of Soviet attention and the main assault. A three hex wide break has been made on previous turns by infantry and artillery eliminating the fort line for 60 miles of width. The Soviets swing all their armoured formations against the line held by infantry units without armour or AT support. The line is crushed. Massed armour formations burst through; some are tasked with overrunning the surviving cadres but most dash across the open territory beyond.. The advanced guard cannot believe their eyes as they reach the fort line between Kursk and Orel – it is empty! So complete is the pace and surprise of the attack that other than an ET security unit which is overrun the whole fort line is unoccupied Tank and Mech corps exploit to occupy this line and eliminate the empty forts. Some curve back north pinning the Germans at Orel, others enter the outer fort line at Kursk

Fortunately for the Axis a large anti partisan operation utilising 4 Security divisions strung out along the Kursk – Voronezh road prevents any exploitation south of the weather-line else Voronezh would be threatened with isolation.

South of Voronezh:  Although deprived of armoured support sheer momentum carries the attackers across the Don just south of the city. Further south the Rumanians hold the river line against a second attack and force a retreat on the Soviets. 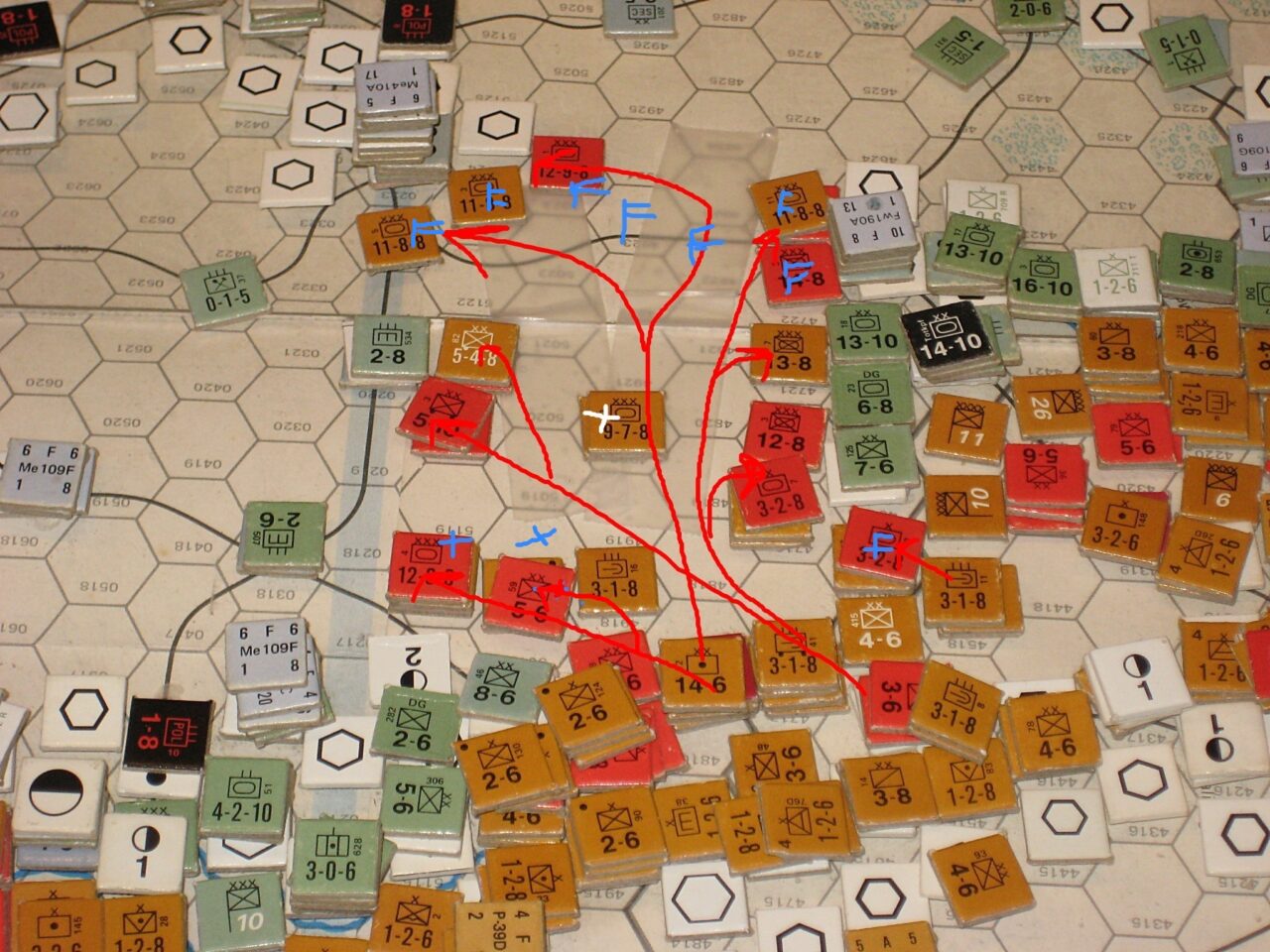 Air Combat: The pattern of previous turns repeats itself with a series of rail attacks and GS. The Soviets do initiate an air attack against an aborted aircraft west of Moscow where a battle develops over the airfield and a YAK7B and Hurri 2 are lost for an Abort on a FW109. A Me110E is eliminated by a IL2m over the field but the attack succeeds is achieving a Hit eliminating a ME109G on the ground and sending it straight to the Remnants box.

A series of long-range raids over Eastern Poland and the Baltic states causes 2 hits with 3 more inflicted by Assault Bombers in the Veliki Luki region.