The Axis forces encouraged by the lack of Soviet progress and empowered by the cessation of the interminable rains put their defensive plan into action. The various Panzer Corps each formed around a SS Panzer or Mech Division move to engage the enemy. The tactics are to hit the infantry/artillery stacks which have penetrated the fortified line. The mobile units move in for the kill. The primary targets are stacks where the Soviets have been rash enough to advance through ZOCs. Here odds as low as 3:1 can annihilate a stack or at least reduce it to a pitiful few cadres. But these odds are safe anywhere there is no enemy AT/ACED capability and so elsewhere they attack the Soviet line hoping for a high roll and half or full elimination.

The aim is not to take back territory or expose the Panzers to attack themselves. Thus in exploration the plan is to move back into reserve or fortified city redoubts.

Weather: The skies finally clear across the whole front signalling the end of one of the wettest winters on record.

Finland and Army of Norway: More units arrive by sea transport strengthening the right wing in the far north of Finland. The left flank falls back to the coast; the link with Murmansk broken. With two transports bringing 10Res of supplies each month to the city all but one regiment of the city defence perimeter is fully supplied. 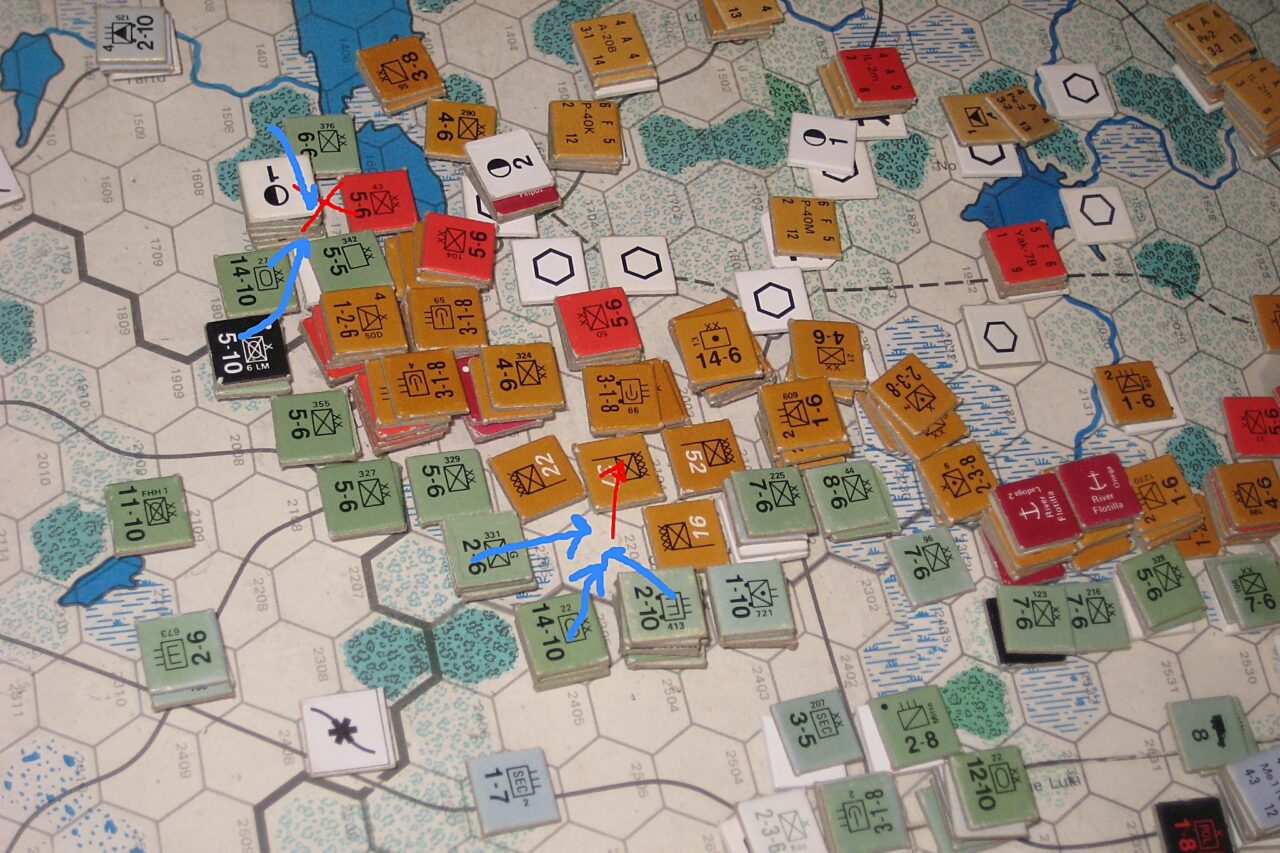 AGN; Narva Sector: A low grade infantry division reinforces the centre but the left wing battered by land sea and air, its fort eliminated, falls back along the coast to the forested hex east of Tallinn. The rest of the line holds in swamp and the one remaining fort. A 6-6xx in reserve bars the one-hex wide clear route south.

Pskov Sector: Das Reich Corp attacks a stack which has penetrated the line. A 6 at 3:1(+3) eliminates 2 Guards xxs and a Rocket xx. With nowhere to run they are completely eliminated.

Veliki Luki Sector: Viking Corp attacks the right shoulder of the penetration south of Leningrad and reduces to cadres 3 guards inf xxs and a 9-6 art xx.

Due to the thinness of the infantry line in the above sectors the corps do not retreat back into reserve but fill the line in concentrations sufficient, they calculate, to avoid a viable Soviet attack. 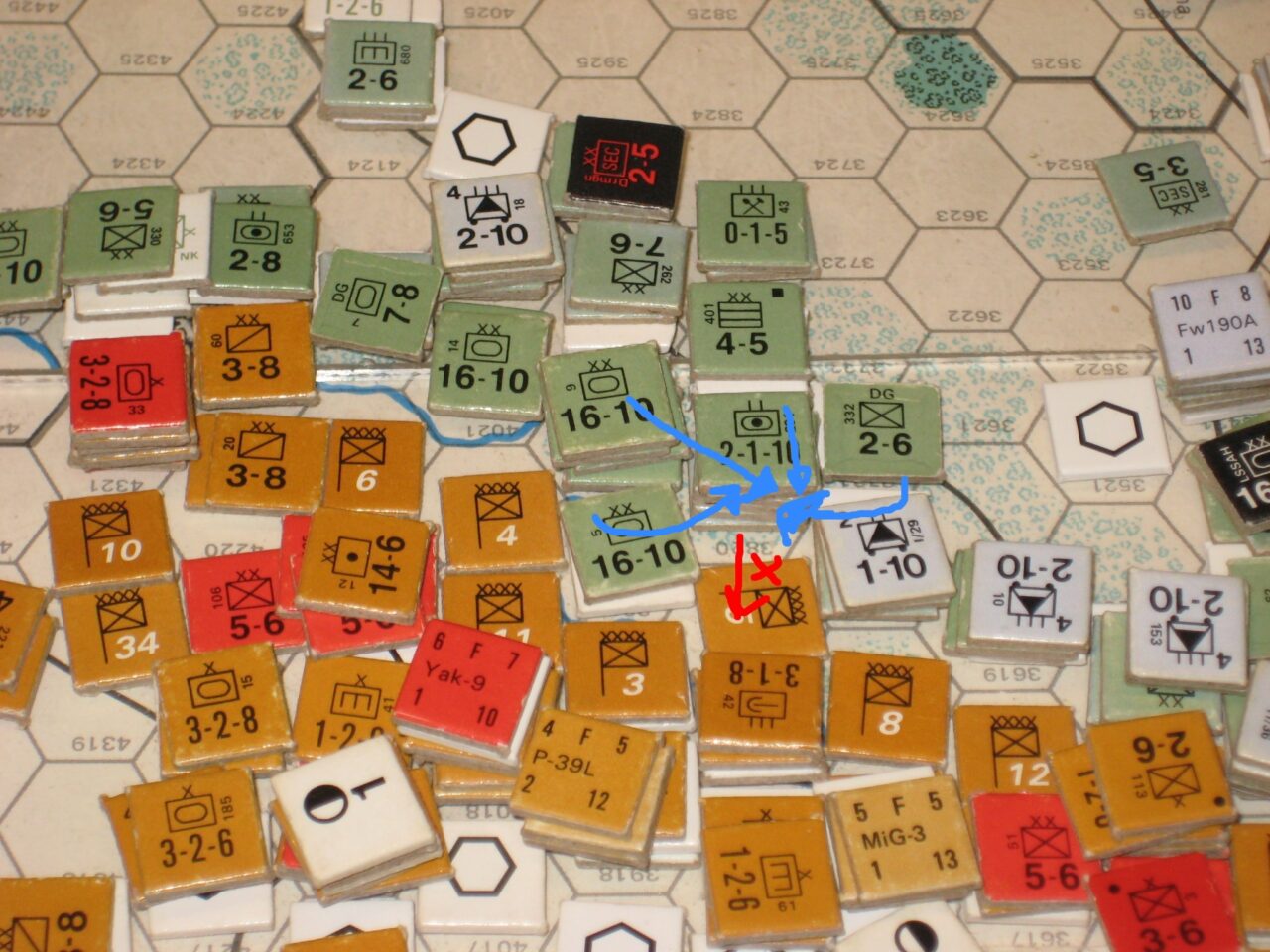 AGC: North Moscow Sector: The presence of a NKVD unit dissuades the Germans from attacking as the inexorable creep of the Soviet blunt force attacks roll on.

South Moscow Sector: The Moscow Defence forces merge now that the threat is clear and form up under Liebenstandart – they attack the soviet bridgehead west of the river sending it reeling back east. 2 Guards infantry and a Guards artillery are cadred in the retreat.  However elsewhere the Germans are forced to evacuate a salient in the line and abandon a fort there.

Orel Sector; Totenkoph Corps detaches a panzer division to Voronezh to herp with the recapture of the SE approaches to the city. The rest of the corps attacks an infantry/artillery stack approaching Orel but the enemy pull back from the assault. Without a kill the tankers return to their fortified positions around the City.

The forts which linked Orel to Voronezh are starting to be eroded and infantry reinforcements arrive to bolster the line with DAS concentrates further enhancing the defence.

Voronezh Sector: The arrival of the 13-10 pz xx from Orel allows a 4:1(+1) attack to take back the ground in front of the city.  Fortunately, there remains a concentration of Siege Artillery in the area which is retained and fires over the river from the north further aiding the attack. A DH forces loss and retreat on the defenders and the ground is retaken.

AGS; South of Voronezh the East bank is fully evacuated. To aid the defence the ground immediately south of the city is evacuated which exposes the road running into the city from the Southwest for the Soviets to regain at no cost which some at High Command think is an error.

West of the Don Engineers move to complete the fortified line and Rumanian artillery transfers in from further south to bolster the defenders.

Air War: Apart from a couple of raids on rail lines south of Voronezh all air power is directed towards bolstering the defence via DAS missions with some brave Luftwaffe units entering the ”No Fly Zone” West of Moscow. Soviet fighters engage where they can and a series of low level engagements swirl along the front.

Despite the mighty FW109’s full spirited escorting skills when the contrails clear the count is 4 Soviet fights for a Ju87D and a pair of JU88As a rough exchange the Luftwaffe can ill afford.