Disappointed with results last month and with the timetable slipping before the offensive has barely begun the Soviets decide to focus their attacks more. Rather than build on last turns breaches in the Axis fortified line and in accordance with their plan they seek to enlarge the breaches to expose the Axis to armoured attack when their second echelon passes through when the forts are cleared.

Finnish front. In association with the increased tempo on the main front the Soviets open their operation to retake Murmansk. Two attacks are launched against the perimeter eliminating N6 and forcing the cadre into the city. An adjacent attack stalls but to the west, over the river, an attack northwards severs the link between the garrison and Norway thus Isolating Murmansk. 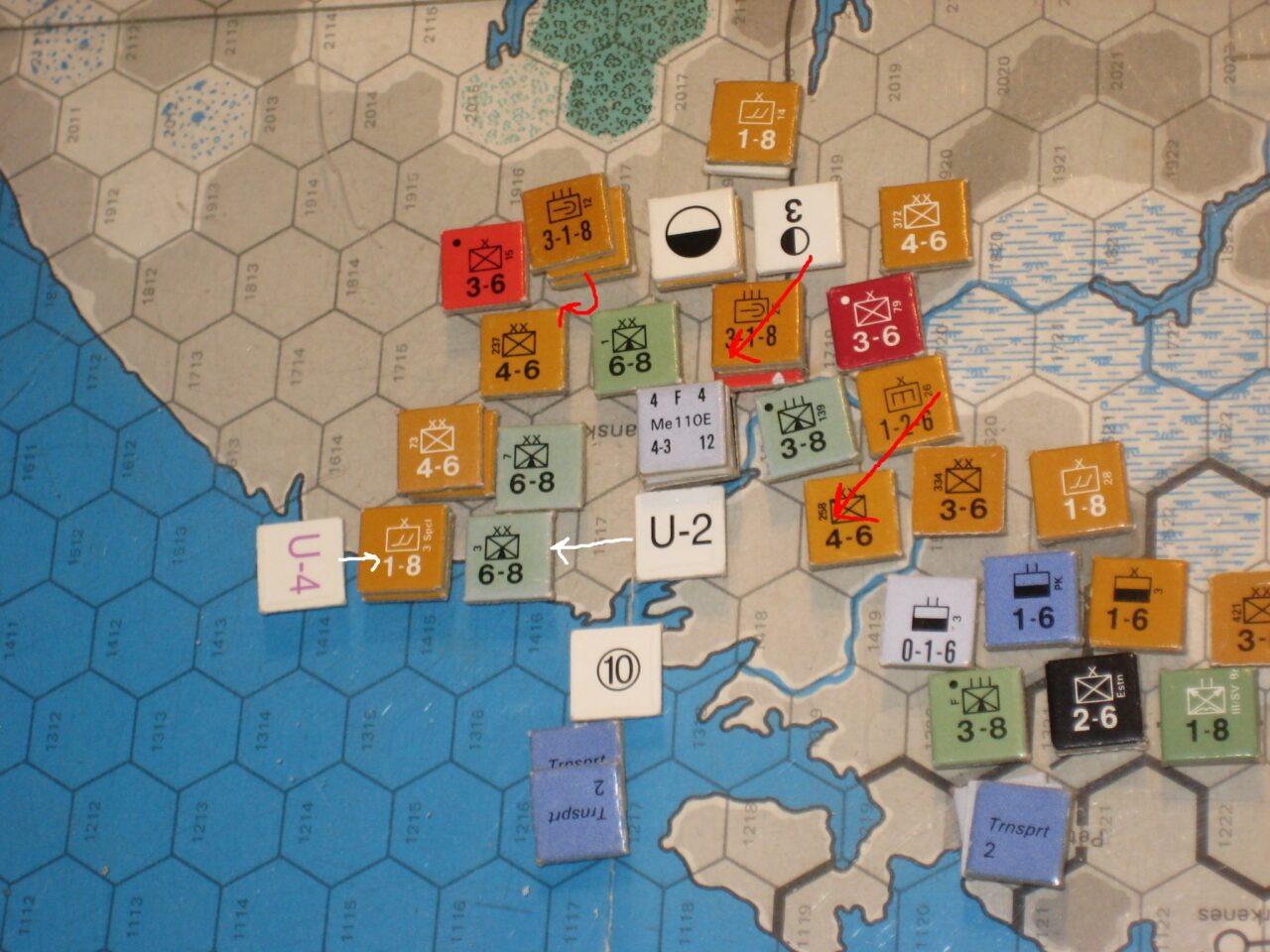 Leningrad Front:  Narva Sector. – The Soviets shift their attack to the rail line held by 2x 6-6 Fortified inf XXs. They launch a co-ordinated assault using all three Service arms. A ground assault utilising a combined arms force of artillery, Guards infantry and armour, an air attack of Assault bombers and finally a shore bombardment by the Soviet Fleet making its first appearance since being trapped at Narva by German torpedo boats and mines. One division is cadred and both retreat exposing the fort to capture but holding the road and preventing any exploitation by the advancing Reds.

Pskov sector; The German line running north/south is again assaulted in two places but German solidarity is upheld and all defenders retreat maintaining contact with their neighbours. Two more forts however are surrendered.

Veliki Luki Sector; The Soviets seek to expand the breach held open by the advance last turn and the shoulders are attacked.   The righthand attack succeeds and a further fort is cleared (HX) but the other stands defiant (NE).

Kalinin Sector – Another bloody exchange in this sector clears a hex of Axis. The Soviets now control 3 adjacent hexes of the Forested crossroads in the northern tip of the salient but as summer has arrived this crossroad no longer holds the key to German supply at Kalinin which can be fed by the road from the Moscow highway. 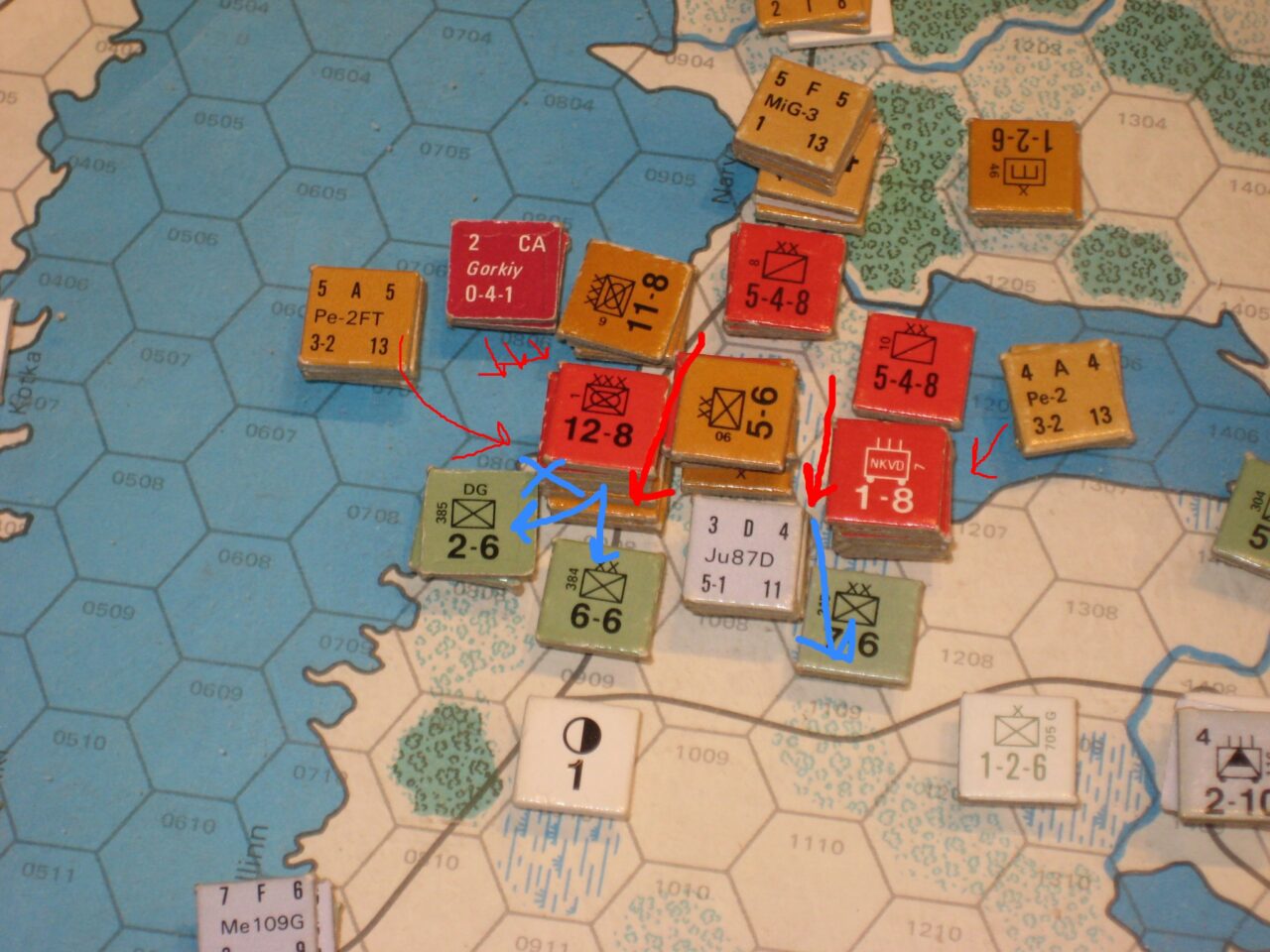 Moscow Front; Northern Sector; Just north of the city the attack continues widening the breach by a further hex. Once again however the Germans manage to retreat without loss and fall back to a second fortified line behind the fort that is removed.

Central Sector: The right flank of the main southern thrust concentrates and makes two assaults in the NW direction where last turn they tried three. Once again lady luck favours the Axis who retreat away but two more forts succumb, and the river line is crossed.

The approach to Orel is assaulted at the point where a sharp river bend places the defenders east of it. The hex is cleared the defending infantry retreating over the river. A recon Motorcycle regiment probes forward eliminating the fort but on making contact with Totenkopf pulls back to the main line. Forewarned by this intelligence the main body decides not to put their head in the noose and does not advance.

Southern Sector: The secondary assault against the fortified line running from Orel to Voronezh is again assaulted in two places. One defending unit retreats the other is cadred (DH).

A move to encircle the city from the south is started and an assault pushes NW some 30 miles to the SE of last turn’s advancing column which is now stalled outside the city.

South of the city the units take up the positions evacuated by the Axis. They catch a mixed stack of stragglers still east of the river. Two German infantry cadres, a Rumanian AA unit and a Luftwaffe ground regiment are assaulted as they que to cross the river. Caught in the open none survive the onslaught.

Stalingrad Sector: The two reserve Tank Corps are upgraded and move North. Local commanders discuss whether they should press SW over the Don to try and trap the Axis forces in the river bend. They are tempted to open up a diversionary assault towards Rostov arguing that the enemy has no reserves in the area.  However true to their rigid command structure and training thy instead choose to continue to move north to joins the assault on Orel.

Air Combat; The Soviets launch a massive three mission attack against German airfields west of Moscow. Each raid consists of 6 Il2m’s with fighter escorts, The German fighter defence masses against one of these raids to protect an aborted unit on the ground. The unassailable FW109s eliminate two Yaks (a 7B and 9B) while other fighters tear into the Il2ms. The bombing mission unsurprisingly fails. The second unmolested raids has two of the assault bombers Aborted/Returned by flak and the third force with a clear unopposed run at the target from both air and ground fire fails to deliver a hit. Across all raids of the 18 assault bombers employed not a single hit is inflicted!

The Long-Range Bomber Flight now based at Leningrad launches 4 deep raids inflicting 3 hits on the rail network and almost isolating the battlefield in this sector. Luckily for the predominantly German defenders one route from Germany still remains open.

Further north a pair of Yak7Bs out of Helsinki avoid all patrol attacks from the two the Tallin based ME109G squadrons and catch a Ju87D on the ground at Parnu aborting it.