Across the entire front from Narva to the curve of the mighty Don river the quiet before the morning’s dawn is shattered in a cacophony of artillery, rocket fire and tank engines. Troops surge forward to contact the enemy line and ……stop!

Out of 18 attacks (over 3 times as many as recent turn averages) fully 4 are NEs and 8 are DRs. This does not bode well for the Soviets who are comforted only by the fact that much of their mobile elements are held back in cloying mud with some larger artillery mired up to their axles and so the full weight of their force is not yet deployed.

The Axis for their part are comforted that the much vaunted Soviet attack is not a firestorm but a damp squib. True, 7 forts are lost, but while their line has bowed it has not broken and losses have been light, just under half occurring in the established battlegrounds north of Kalinin and at Voronezh.

The same mud which prevented the Axis feeling the full weight of the Soviet might now serves to limit their own response. None of the reserve forces have the mobility to effectively engage the enemy and only one reaches a meaningful defensive position where Group Wiking laagered at Veliki Luki detaches panzer divisions and support units to seal the breach south of Leningrad.

Weather = 6! Against all odds it continues to rain in the North.

Finland and Army of Norway: More small units are drip fed into the Norway defences.

AGN; Reserve and replacement infantry divisions move to reinforce the breaches in the fort line and bolster the shoulders where the Soviets have advanced. The Narva line breach occupied by the cadred remains of the defending infantry xx is reinforced by an engineer regiment and a flak unit. A JU87R completes the defence by surviving Soviet intercepts aided by two squadrons of Me 109Gs. 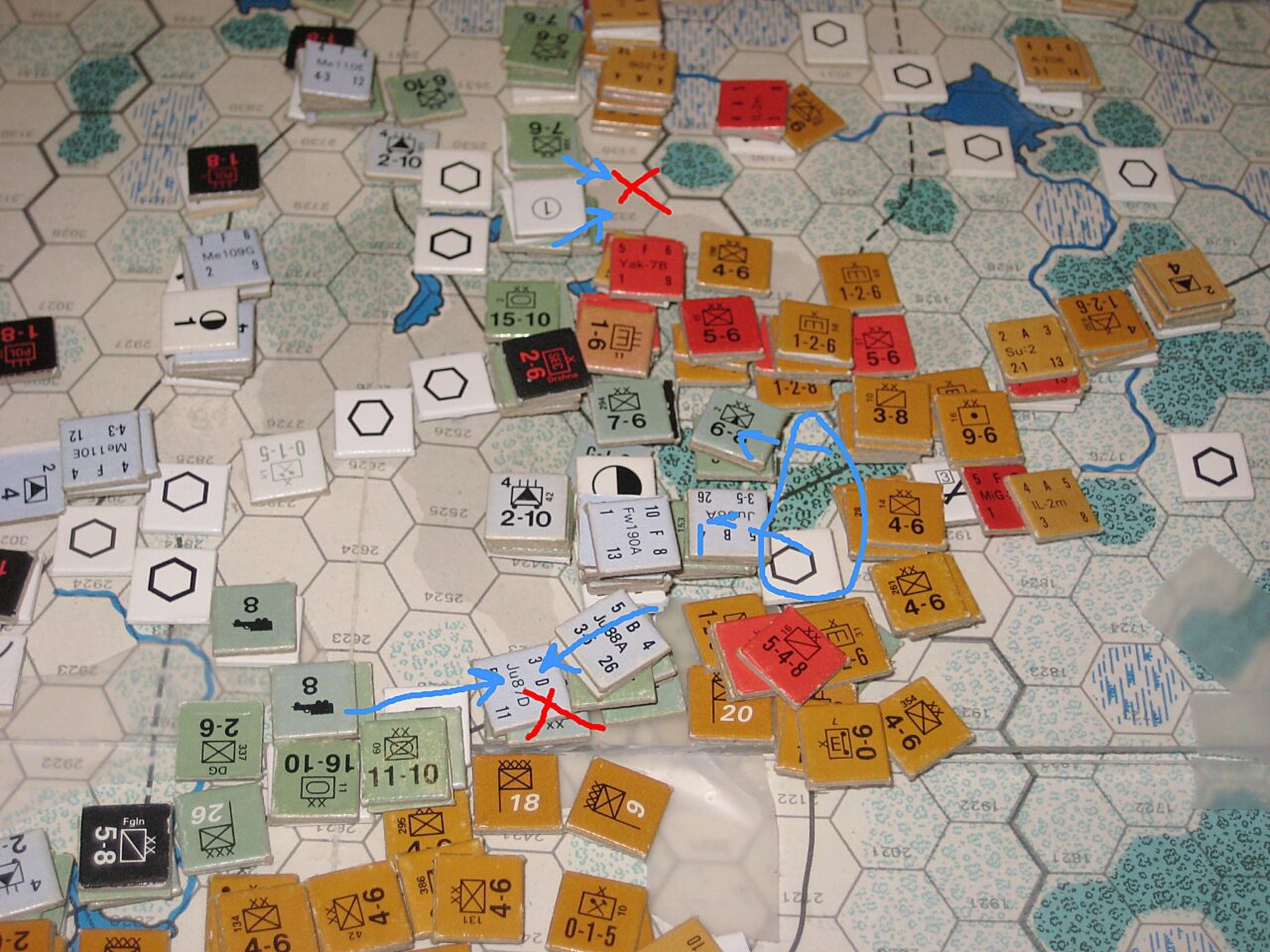 Retreat in the North and counterattacks

Group Wiking detaches units to enclose the Soviet Army moving south down the rail line from Leningrad but does not reach the lines in time to mount an attack. Meanwhile Group Das Reich to the West moves towards the front line but awaits developments.

Further East the German line faces a thin screen of U3 Soviets and as a target of opportunity again eliminates an enemy infantry stack and decides against advance. The attack is aided by flak Returning a A20B defending air unit.

In the Kalinin area the southern penetration of the line is counter attacked by the powerful units stationed along the line. Here there are sufficient mobile units to counter-attack intrusions and fall back into the line again. The attack is successful and only a single cadre limps back across the line to the Soviets starting position of a fortnight earlier. The northern intrusion however cannot also be attacked and the slow grind west by the Soviets finally persuades the Axis to give up ground. Two hexes in the extreme northern tip are evacuated. This exposes the junction between the Kalinin/Leningrad rail line and the east/west road to Pskov and will bring supply relief to some Soviet units being punished by the current series of German opportunistic attacks in that sector. 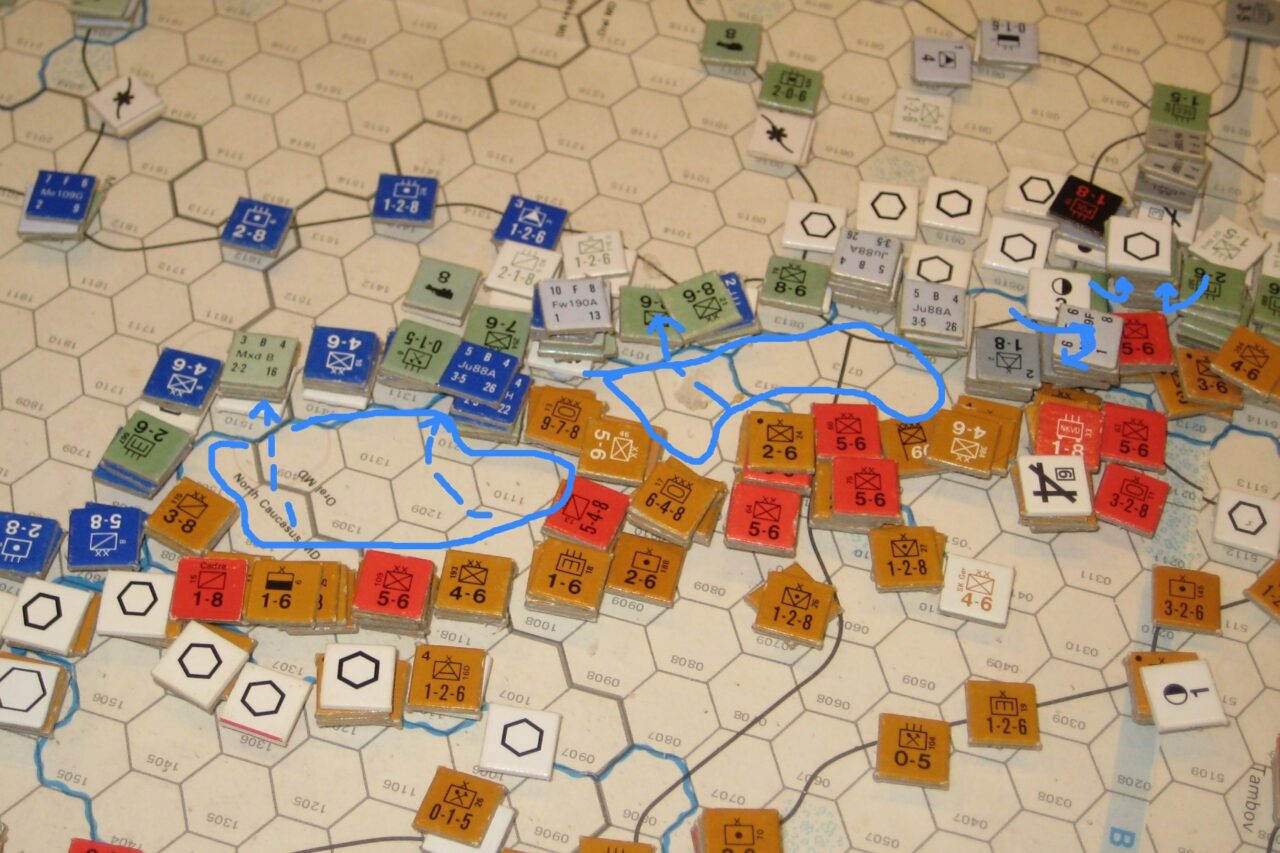 The Axis evacuate the area south of Voronezh, a counterattack East of the city fail

AGC: The central reserves move from Vyazma toward the points of main Soviet effort.

The presence of an NKVD unit occupying the Soviet spearhead immediately north of the Moscow lodgement dissuades the Axis from attacking because the risk of an Exchange is too high at the estimated odds.

At the southern end of the Front Group Totenkopf occupies Orel while just to the Southeast. Infantry reserves and units shuffling from the Voronezh sector seal the line against the Soviet forces occupying the former fortified position left by the retreating divisions.

At Voronezh the Soviet drive to the city is attacked but the attack fails to make any headway against the stalwart defenders (4:1 – NE).

AGS: South of the City the mixed Axis force moves to the relative safety of the West bank of the Don most of which is fortified, Engineers and Res Pts are positioned to complete the line by the end of the month. Some units are left East of the river and DAS concentrates to protect these units.

Air Combat: Most units fly DAS missions except in the Moscow sector which has become a no-fly zone for the Luftwaffe due to the concentration of VVS fighters based in the city and nearby airfields. Few of the DAS units are intercepted and where this occurs the results are generally ineffective.