The T34 stopped just below the crest of small ridge. Sergei jumped down off the back of the 31 ton behemoth that had transported him to the front line. His ears still ringing from the sound of the engine throbbing beneath him and his nose still stinging from the acrid smoke of the twin exhausts. As he reached the ground he plunged knee deep into a crisp layer of snow which had fallen overnight. Inching forward to the crest of the ridge he carefully excavated a small hole in the snow and peered through. Below him a few hundred yards away was the objective. He was proud to be attached to one of the best units in the Soviet army a newly formed Guards Mech corps. Learning from past mistakes and with 18 months of painful experience behind them STAVKA had created these new formations to counter the German threat. Equipped with the latest tanks and equipment their mission was to pursue the enemy and drive into the enemy rear turning Blitzkrieg against its inventors – Soviet style.

They had moved from their leaguered position at first light. Now battle was to be joined. From his vantage point Sergei examined the scene before him. A dirt road ran from over his right shoulder east-west and between the farm buildings. Although there had been a recent snow fall it was brown and churned up indicating that many tracks and wheels had used it recently. On the left a low single storey barn of earth and thatch construction attached to a larger two storey structure. A gap then the Farmhouse with the road on its right. A small yard was set in front of the larger barn and farmhouse bounded by a low earth and stone wall, Sergei estimated about 4 meters in front of the buildings.

Sandbags filled some holes in the wall and flanked the road as it disappeared out of sight between the farmhouse and other buildings beyond. At this point concrete posts had been set designed to prevent an unfettered approach by larger vehicles. This was a well prepared position, designed to be held, not some hastily assembled delaying point.

Movement caught his eye off to the right and he turned his gaze just in time to see a metal clad head duck down behind the wall. So, as expected, the enemy had decided to make a stand and was aware of the impending attack.

There was a roar from the T34 which lurched forward and crested the hill. Immediately it was met by an enemy shell which ricocheted off the thick frontal armour and landed a few yards from Sergei as he lay ready to charge forward, the snow sizzling and hissing around the fragment.

Time to go!, he thought, rose, and charged down the embankment along with ranks of comrades. In particular on his left was his long-time friend and fellow combatant Oleg. Their objective was a low opening in the smaller barn with a hessian grain bag draped in front forming an impromptu window pane.

Firing from the hip with is PPS-42.  He ran fast as possible to the opening his legs pumping, his heart pounding. Although only 100 yards the going was tough in the deep snow and he felt his lungs were about to burst as he reached the barn and slammed against the wall. Instinctively he had taken the right side and his friend the left. Unspoken but honed in shared combat and they simultaneously snatched a grenade and with backs to the wall against any back-blast threw them into the dark recess of the barn. Cries of anguish were the only reply from inside. To be sure Oleg thrust his machinegun through the window and sprayed the interior of the barn. There was no reply.

From here they could now flank the low stone wall but as they turned they saw the last of the erstwhile defenders disappearing around the end wall of the two story barn. A sudden blast removed the top corner of the barn showering debris on the retreating soldiers as a shell from another of the tanks found its mark.

The tanks moved off between the buildings and the firing and mayhem moved off with them into the distance.  Sergei and Oleg paused for breath before moving forward once again……

Finish Front: Ski units continue to swing wide of the Germans in front of Murmansk forcing them to continue their retreat.

Units push west across Karelia the individual pockets being enveloped without a fight or succumbing to overwhelming odds where a RP is available, Only west of Salla does a 6-8 German mtn XX bar the way forward. 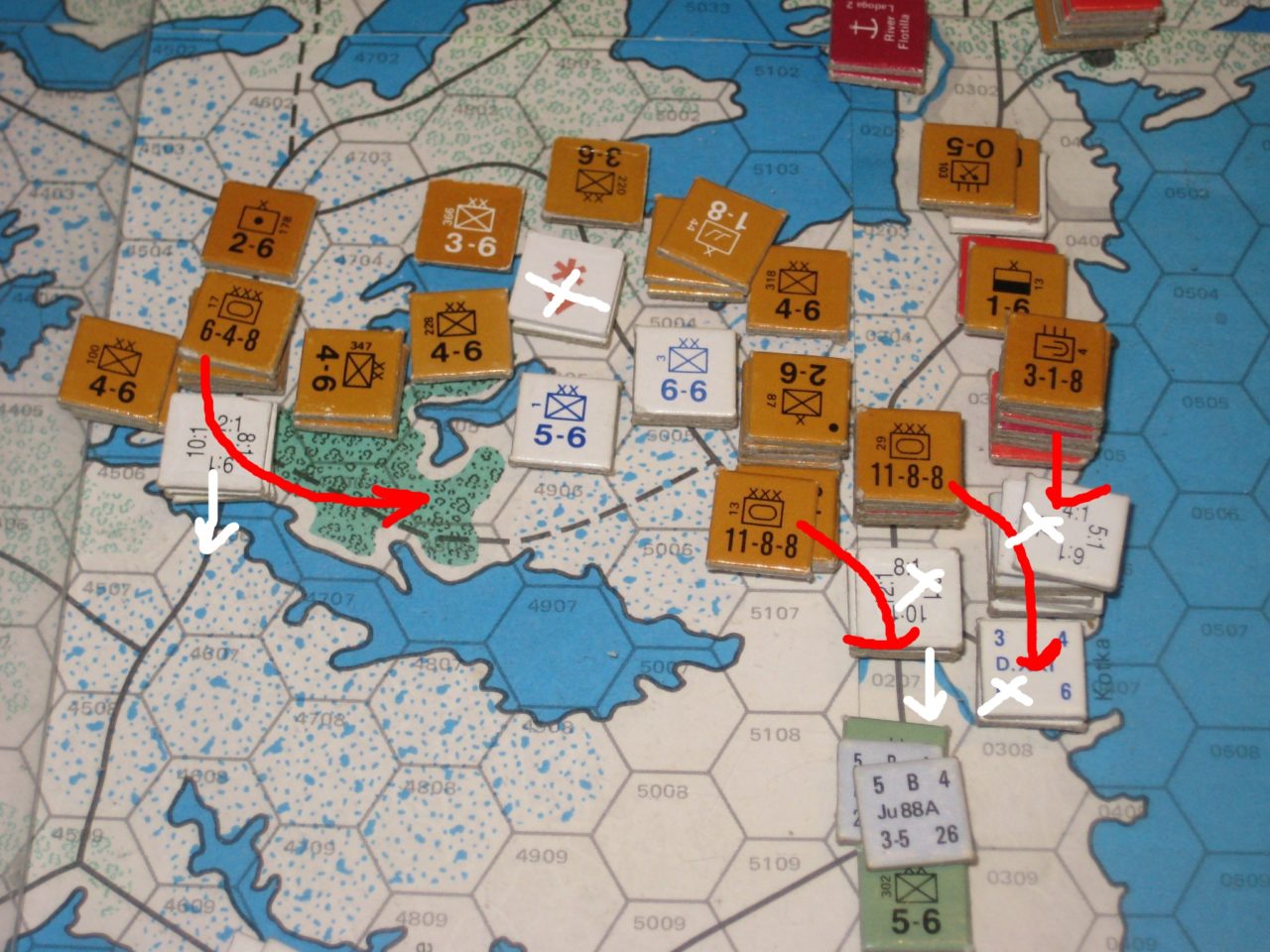 The destruction of the Finish Army 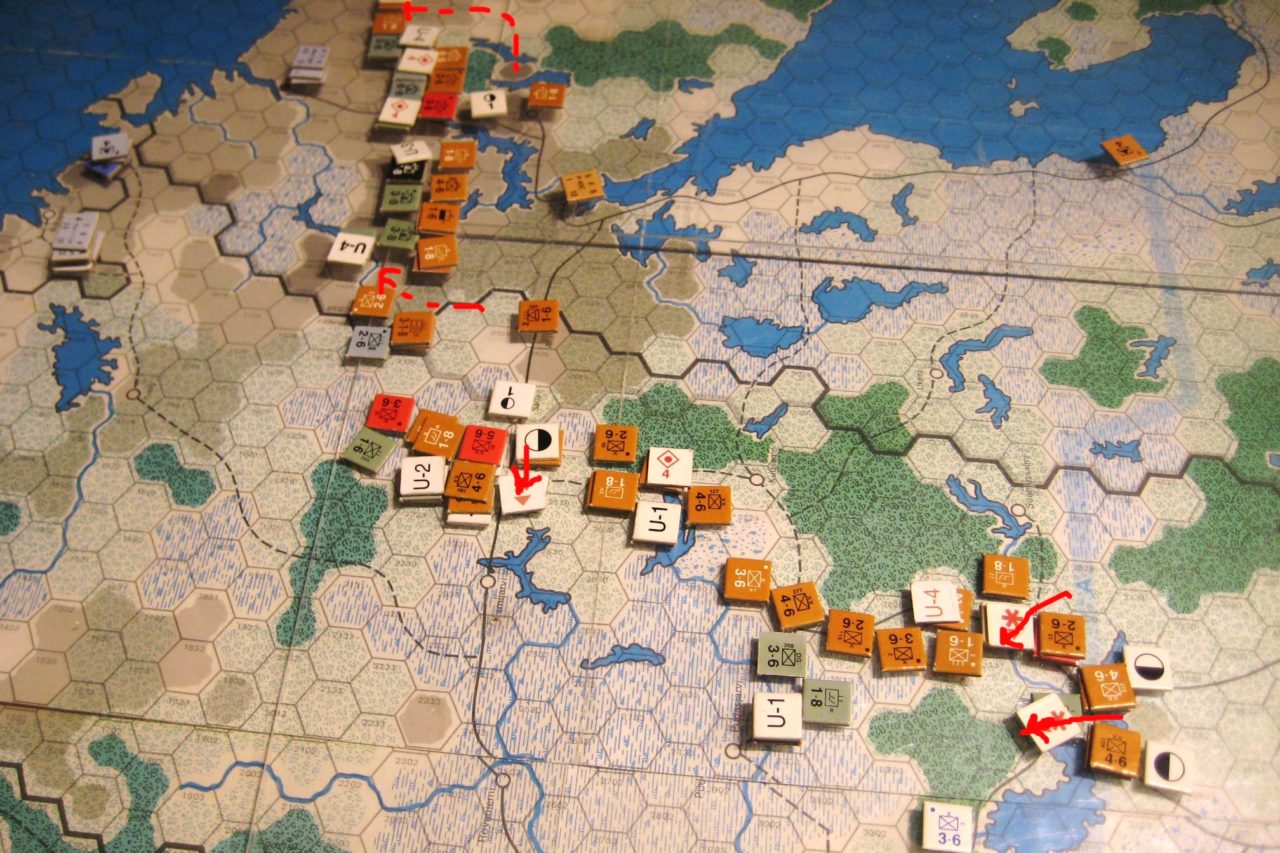 Leningrad Front.  Attacks continue along the line where the mass of Soviets can gain sufficient odds to attack the Axis defenders.

One of these attacks is critical and heralds another chapter of retreat and misery for the defenders.  Driving south a concentrated force of 3 mech corps with rocket, artillery and guards infantry achieve an EX against a critical hex astride the rail lime west to Veliki Luki just by the small lake cluster in the north Valdai. The advance cuts the line and places the bulk of retreating German units to the East of the Kalinin/Leningrad rail line out of supply.

Just north of the small lake cluster south of Kalinin another breakthrough is achieved against the fort nestled in the oxbow lake between Moscow and Kalinin. The Soviets determine it is worth taking the risk of exposing their prized Mech units to counter attack and the 5th Guards Mech forms the vanguard of an exploitation move capturing the Eastern terminus of the road linking Kalinin to the E/W Moscow road.

Moscow Front: One attack only is planned against one of the two Moscow hexes still held by the Axis. At the last minute the attack is cancelled. The general in charge of combat planning is re-assigned to a recruitment centre in Siberia for overestimating by a factor of two the combat capability of the non-artillery attack units just before the units rolled out. 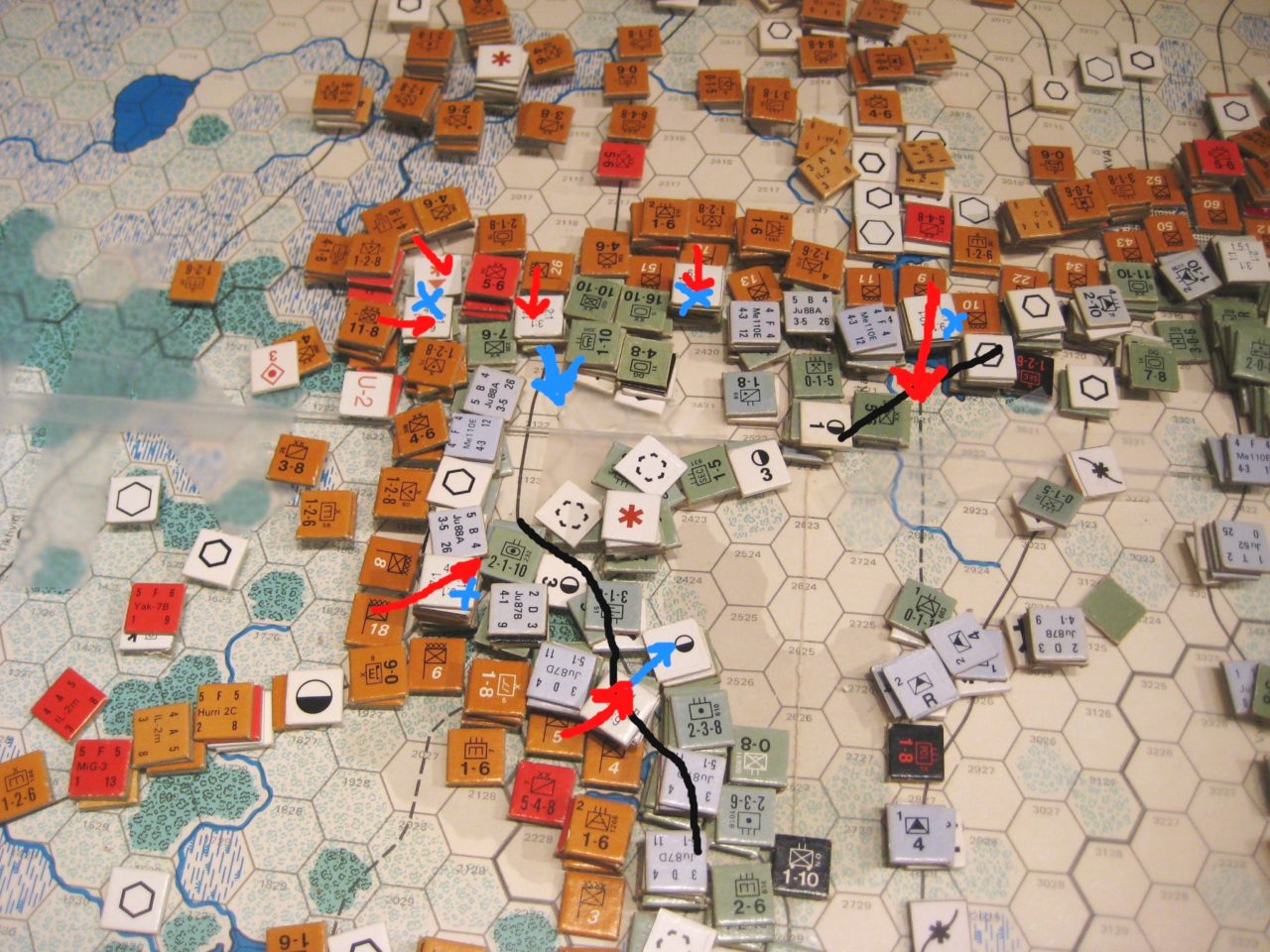 The Axis frontline gets pushed back north of Moscow

Voronezh Front:  The northern sector begins to receive lower grade infantry regiments and divisions who have been freed by the reducing front in the north.  Such is the perception of the limited threat posed by Operation Oxbow in the south that some are diverted to man the new double fortification line being constructed between Tula and Voronezh against any Axis Summer Offensive.

Others continue moving south and are joined by some rebuilds out of Voronezh city.

Against the Axis advance the Soviets fall back into supply and consolidate their positions.  Where possible mobile units form islands behind the front line to minimise enemy exploitation. Only two stacks now remain U2 and Axis forces themselves will soon reach the end of their increasingly stretched supply lines.

Air War: The attack against Moscow may have been possible with massed air support but in the end the risk of a failure to raise the odds and the possibility of an AR proved too great for STAVKA so instead aircraft support the 5th Mech and its logistic tail with massed DAS against any Axis back-lash.  All other aircraft are assigned to airfield bombing missions to try to suppress the Luftwaffe’s capabilities over the main Moscow/Leningrad front. A massive air raid of 14 aircraft achieves only 1 hit but 1 elimination each and 3 aborts are achieved amongst the combatants.