Field Marshal Paulus recently promoted for his successful implementation of Fishhook and the capture of Rostov points at the situation map spread out on the table. He is surrounded by a coterie of senior officers in the former drawing room of the Tsarist manor house currently used as the HQ of Axis Army Group South.

The map is marked with what, to the untrained eye, is a spider’s web of lines, circles and arrows, some solid, some dotted all annotated with symbols and numbers,

Titled “operation Oxbow”, to the military minds assembled however it described in great detail the latest plans for the Army Group, assembly points, routes of march, expected points of enemy resistance and possible routes of counter attack. Paulus pointed to a confluence of rail lines and rivers on the Don approximately 80 miles South of Voronezh.

Our Hungarian allies will strike here with engineers to assist the initial river crossing. 7th panzer and 29th PzGren with 503 Hvy Tk battalion, recently redirected from their march to support AGN, will provide assistance then pass through the breech and exploit in an easterly direction securing the flank from any interference by the enemy concentrations in the region of Voronezh.

In the centre Colonel Grazi and his 16th Italian corps will cross here securing the enemy airfield on the East bank of the Don. This attack is to be supported by 12th 30th and 87th infantry divisions and the 183 Tk battalion.

The southern crossing will be managed by the Rumanian 2nd Army and will cross at these points here, here and here; the southernmost fully frozen section of the river. Attack force comprises the 3rd, 5th, 8thand 10th Rumanian who will eliminate the opposition with the assistance of 8th pz and 24th panzer. The mobile elements will keep this tributary as right flank demarcation and will exploit in the direction Borisoglebsk.

Reports are that the enemy is in supply difficulty in this entire sectoe due to the poor weather and will offer little resistance.

Operations to begin simultaneously in all sectors at .07.00 hrs 20th January.

“Will co-ordination will be a problem sir, with all three Axis partners?”

Detailed plans are being prepared and will be dispatched by a few high ranking officers to ensure maximum security.  Weather is not good and enemy recognisance is limited to a few short good weather windows so surprise should be total.

Date 5th January 1943   07.45hrs
Location: .Millerovo airstrip.
Situation: Embarkation building. “Luigi have you got my document case?”, “Yes commandant.”  “Good, then we can go”. The pair walk across the crisp snow covered field to the waiting courier transport aircraft. Standing on its tall rigid undercarriage, high mounted wings stretched out it did indeed look like its namesake, a stork poised for flight.

As they strapped in the pilot tuned and remarked. “We need to hurry sirs the meteorologists favour a storm blowing in from the Southeast and we only have a narrow window to reach the 16th’s landing strip”.

“We are ready pilot, please leave at your convenience.”

The aircraft reached the end of the runway and leaped skyward, clearing the embarkation building they had just left and gracefully turning in a wide arc headed for its destination.

Date 5th January 1943   08.40hrs
Location: Somewhere over the frozen Don in the region of the front line.
Situation: Desperate.

The pilot shouting over the roar of the engine and the gathering storm addresses his superior and the adjutant “Hold on this is going to be rough the weather boys got it wrong again. The storm has closed in far quicker than expected. I am trying to get a safe set down point. The 16th airstrip is completely snowbound but the 5th Rumanian reports a pocket of clear weather over their position so I will try for there, hold tight.”

As he speaks the plane lurches to the right and plummets downward dropping 100 meters in a few seconds; the pilot battling with the controls.  Miraculously he holds the plane level and it descends. Gaining level flight on he turns the craft left and right. All are desperately searching the squall to find any patch of clear sky or ground. After 20 minutes or so the adjutant cries “Over there, to the left!!, I think I see some lights!”.

The pilot turns the plane in the direction the adjutant is pointing straining with all his might on the control stick forcing the light airframe against the power of the winds menacing the plane.

“Yes! I see them it must be the Rumanians.”

Minutes later the plane slams down hard between the line of kerosene flares, and bounces three times before becoming earthbound. Just as it is seems safe for the occupants to breathe again the aircraft is sent skittering left by a sudden gust of side wind. Running off the beaten earth runway. the frail undercarriage finally gives way and the plane upends and cartwheels once finally coming to a shuddering halt; inverted.

The pilot’s head hangs limp, his body crumpled over the control stick. The colonel grabs his briefcase as flames start to lick into the passenger compartment and turns to his adjutant. Sensing life he drags him from the wreckage. He sighs’ relief and shouts for help to the advancing soldiers emerging from the gloom of the snow flurries, rifles raised.

An officer steps forward. “Welcome gentlemen to the Union of Soviet Socialist Republics,; Colonel, let me relieve you of your briefcase”

Finland & The army of Norway. The German mountain corps withdraws from its position and falls back north towards Murmansk on reports of Soviet flanking moves from ski patrols. Two attacks are planned to seal the breach between the corps and the defenders moving NE on their right flank which has become separated allowing more enemy ski troops to penetrate the line. One attack fails due to lack of supply but the other eliminates a ski unit.

Elsewhere the Fins withdraw support in the north and transport good units south to try and slow the Soviet advance on the capital. This puts a further strain on the Finish/German relationship, already difficult due to Mannerheim’s repeated requests for more assistance in the south; and forces a general retreat in the centre to close the gaps left by the Finn’s withdrawal.

In the south of the country forces desperately move west along the coast to halt the invader.

AGN: The Axis here face a dilemma. They sense hope as the headlong rush West eases and risk of a major encirclement starts to fade as the majority of troops are approaching the new defence line in front of Kalinin.

Mustering their forces they have two alternatives  1) to attempt a rescue against the encircled Panzer and cadre and hold an easterly line as an escape route for  infantry struggling south through the marshlands or 2) Use the troops moving West and those attacking East to mass against the Soviet Tank Corps thrusting north from the Upper Volga bridgehead.

Reluctantly they abandon their brothers in arms to inevitable destruction and mass against the Tank Corps.  To hold East would risk encirclement and suck more forces into the maw of the advancing Red Bear.

The attack goes in and eliminates the entire Soviet corps only two cadres surviving.

This is the only attack on this front but brings relief to the Axis who dare to hope that they have checked if not halted the Soviet advance.

AGS:  A new operation is launched, codenamed Operation Oxbow, against the Soviet units along the narrow section of the Don bend. About 6 hexes of which are U2 due to the limited rail net on the eastern side of the river. The name is derived from the complex confluence of roads and a sweeping river bend about 80 miles south of Voronezh which impedes Axis use of the roads while it is in Soviet hands. The attacks range from here to the thickening of the Don further south. 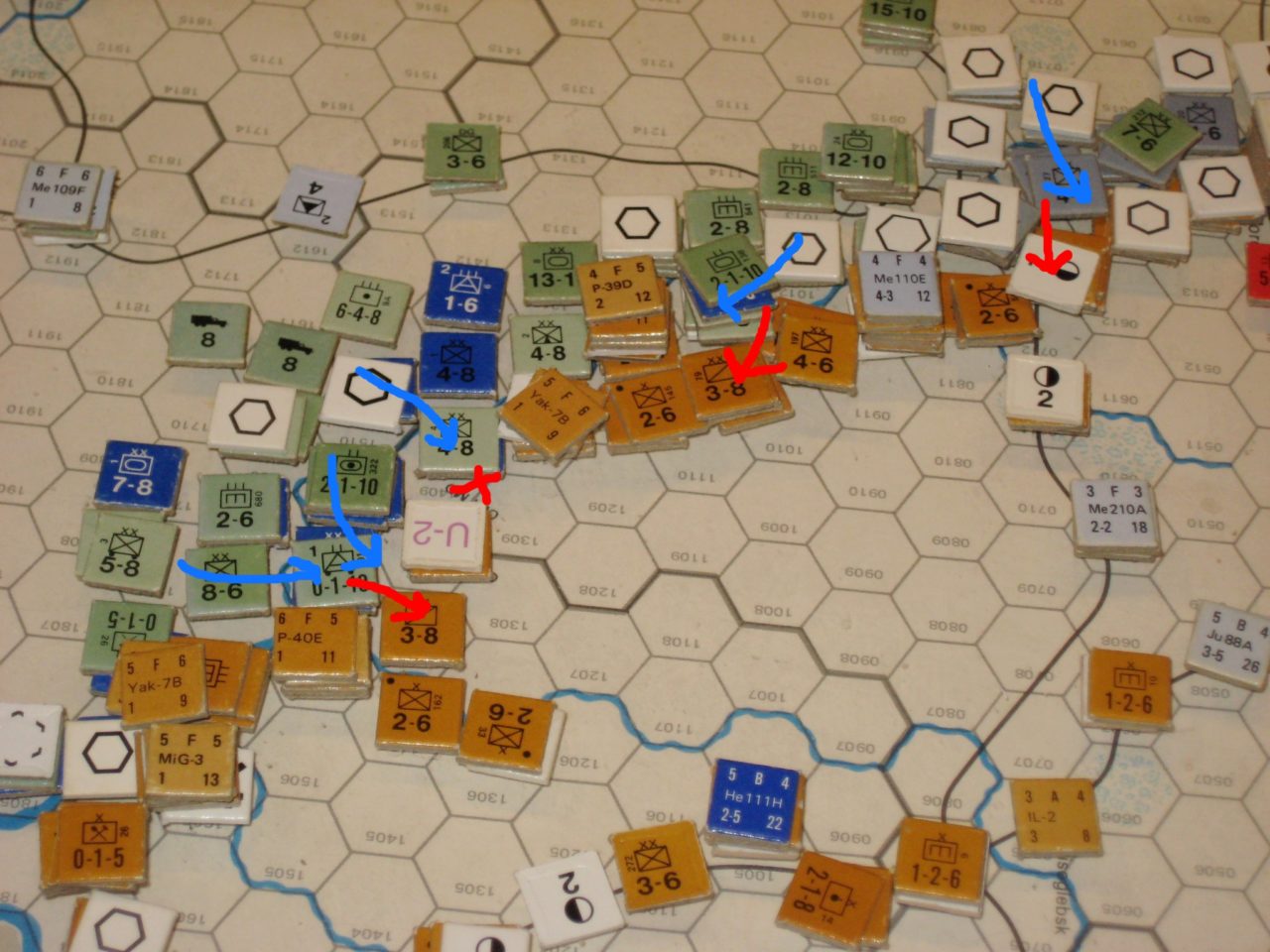 The attacks go in prematurely before the tanks and mech units in place because the ruse of troop rotation cannot be used for too long and the Soviets are starting to reinforce this sector as demand for troops in the north diminishes.

(Up to now most reinforcements have been sent north but as the front their contracts the density is such that the Russians are fully stacked along most of that front.)

In a truly international operation 5 attacks are launched in total including German, Rumanian, Hungarian, Italian and Slovakian troops. Results are mixed with 2x DE and 3xDR results. Unfortunately the DEs are away from the panzers and the DRs in front of them. They are too far back and un-concentrated to exploit but 5 hexes are gained on the East bank.

Air War:  Most Axis efforts in the north are DAS as they shore up their defences and in the south interdiction is used to impede soviet moves against the crossing of the Don.  A number of operations are contested and a JU87R and Ju88A are exchanged for a Yak7B