Kurt distinctly remembered the drill sergeant addressing his basic re-training passing out parade “The Fatherland is in need of fit young soldiers for the Eastern Front, unfortunately all I have got to send are you sorry bunch of old has-beens.”

Being a hill farmer from Bavaria Kurt’s sense of geography was not great but he was pretty damn sure there was not a sea between Germany and Russia – so why on all of god’s good earth was he leaning over the side of a troop transport staring at the half digested remains of his breakfast cascading down into an icy grey, rolling sea?

After the parade he and his regiment has been loaded onto a rail truck and sent to Konigsberg harbour and there onto the troopship bound for Hango.

Having been called to arms as a young teenager he had just had a week of action the last time Germany had called upon him for his dubious soldiering skills. Nevertheless he had managed to acquire a bit more iron in his system than the recommended dose as the icy cold wind constantly reminded him.

He watched as the ship entered the ice floes and followed the narrow channel kept open by their allies icebreakers.

Whilst the national radio stations had been broadcasting heroic stories of daring do from their northern ally he had heard rumours of a complete collapse of the Finish Army. His better informed comrades had said the Fins were shaky allies at best and so the Fuhrer had decided to bolster their resolve by sending them some aid in the form of his unit of reservists.

In the end with the Soviet Fleet bottled up at Leningrad their passage was uneventful and they were moved from the docks at Hango by broad-gauge troop train to Helsinki.

They arrived in absolute chaos. Soldiers and civilians intermixed and scurrying hither and thither as orders or panic directed them.  Soldiers carrying their arms disembarking and marching east to the front; civilians with their suitcases containing what few possessions they could carry fleeing west by whatever means available.

Kurt knew no Finish but heard the panic in the voices and could tell the enemy were not far away.

Two days later the rail line from Hango and the west was cut by advance elements of the Soviet 13th Tank Corps.

Finnish Front: The pursuit north continues and in the centre more stragglers are cut down.

In the south of the country with their backs against the frozen shores of Lake Paijanne the heroic Finish Motti is finally surrounded and crushed by weight of arms.

Along the cost Soviet 13th tank corps completed the encirclement of Helsinki.

The only highlight for the embattled defenders is that a 0-8 AA unit at Tampere drives off a Soviet GS IL 2 dropping the odds and a low roll allows the defending infantry brigade, against all odds, to check the Soviet two corps tank assault. (NE) 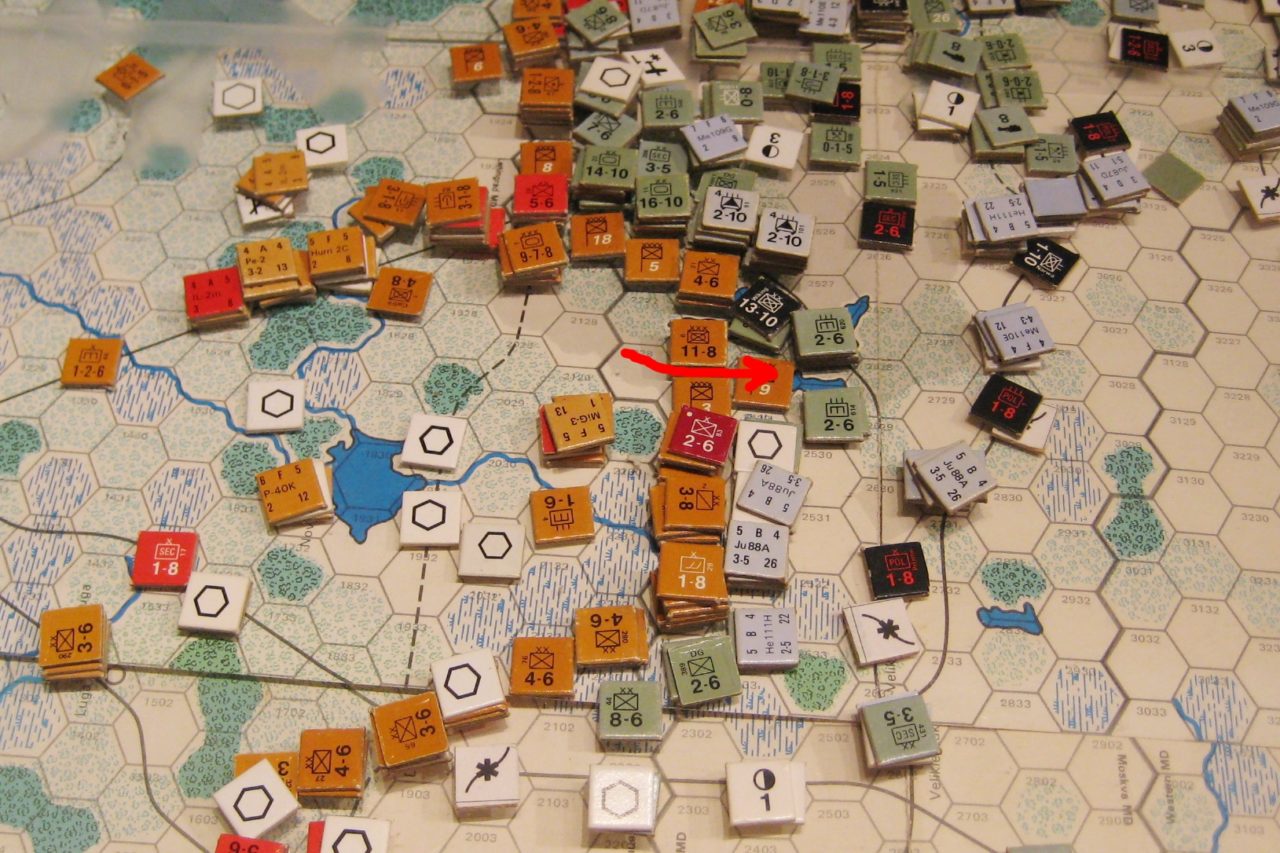 Soviet riposte south of Leningrad, weakened due to the large losses

Leningrad Front: The loss of the mech division and strengthen of the German defenders forces the Soviets to probe for other weak spots. They identify a 3 division stack to the west of the former thrust and strike pushing back the defenders and advancing into the Axis lines.

As a matter of course they eliminate a stay behind fortified 3-6 cadre.

Along the Kalinin sector a similar pattern emerges here with greater losses the thrust south of Kalinin is completely stalled but the Soviets do strike further north at a 2 division stack and cadre it including a 6-10 mech unit.  A stay behind fortified 3-6 cadre and 5-6 inf xx are also eliminated in this sector.

Moscow Front: Stalled in and north of the city the soviets launch a surprise attack in a previously quiet sector just south of the city. It fails to dislodge the defenders. (NE). 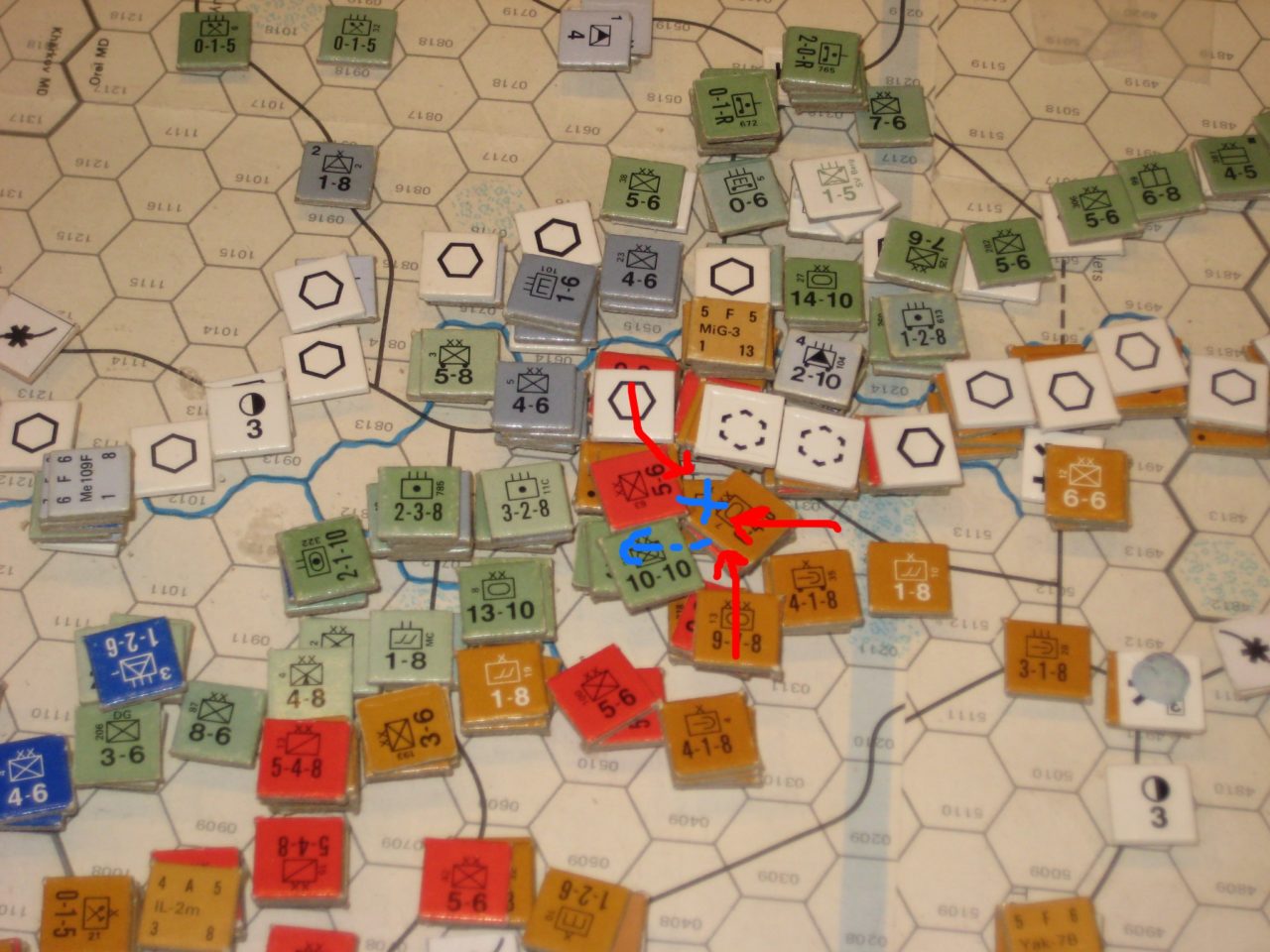 Voronezh Front.  The Soviets take a chance and mustering all available strength including drawing out a guards defender of Voronezh mass and attack the southern Schwerpunkt of the German attempt to encircle thi city. They obtain am Exchange against the 32 point stack cadering the two Panzer divisions (15-10 and 12-10) but weakening their ability to survive a counterthrust in due course.

Air Combat: The usual mix of rail and airfield bombing results in an even number of kills and aborts for limited results. The Soviets add a harassment hit in a clear hex just behind German lines north of Kalinin to limit their manoeuvrability.

The Soviets mount a massive 12 bomber raid on Kalinin Airport to draw out the Luftwaffe. This it does and 13 Soviet fighters are engaged directly by 9 German fighters. The Soviet airmen’s plan backfires as they exchange 3 aborts each but lose 4 fighters without inflicting a single kill on the enemy. Flak over the city aborts a bomber and returns 3 of the rerst. Of the 3 viable bombing runs from the remainder only one is successful.