The Axis decide the time has come in the north to stop running and to deal the Soviets a mortal blow. The two most advanced Soviet stacks project a single hex into the German lines. Powerful forces lead by first line panzer units mass to counter attack.

However the victory is a pyric one at best. To paraphrase the words of the indomitable Lady Bracknell in The Importance of Being Earnest. “To roll a one and Exchange against a 24 point stack may be considered unfortunate, but to follow that by rolling a second Exchanging against a 38 point stack is positively careless.”

And thus it was; a massive bloodletting which eliminates 3 Soviet Mech divisions (one guards) 3 Guards rifles and numerous rockets support troops and an artillery division cadre. However the Exchange is a terribly high cost (DRs would have achieved enough.  As the attacker and ensuring AEC is <50% means the Germans can use infantry for most losses but 5 divisions are cadred including a mech xx.

The next few turns will reveal if this is sufficient to blunt the blows from the Soviet colossus.

Weather. The false spring in the south ends with snow returning across the map.

Finland & Army of Norway: The rout continues in the centre and the Germans the north are reduced to a small perimeter around Murmansk and scattered units fleeing towards the Norwegian border.

In the south the legendary Finnish motti launches a desperate breakout assault against a lone 4-6 XX barring its path and eliminates the Soviet driving 16 more miles westwards. Meanwhile the last reinforcements arrive in Helsinki as a 5-6 German division rails into the city just before a Soviet tank corps swings south to cut the route to Hango forever. 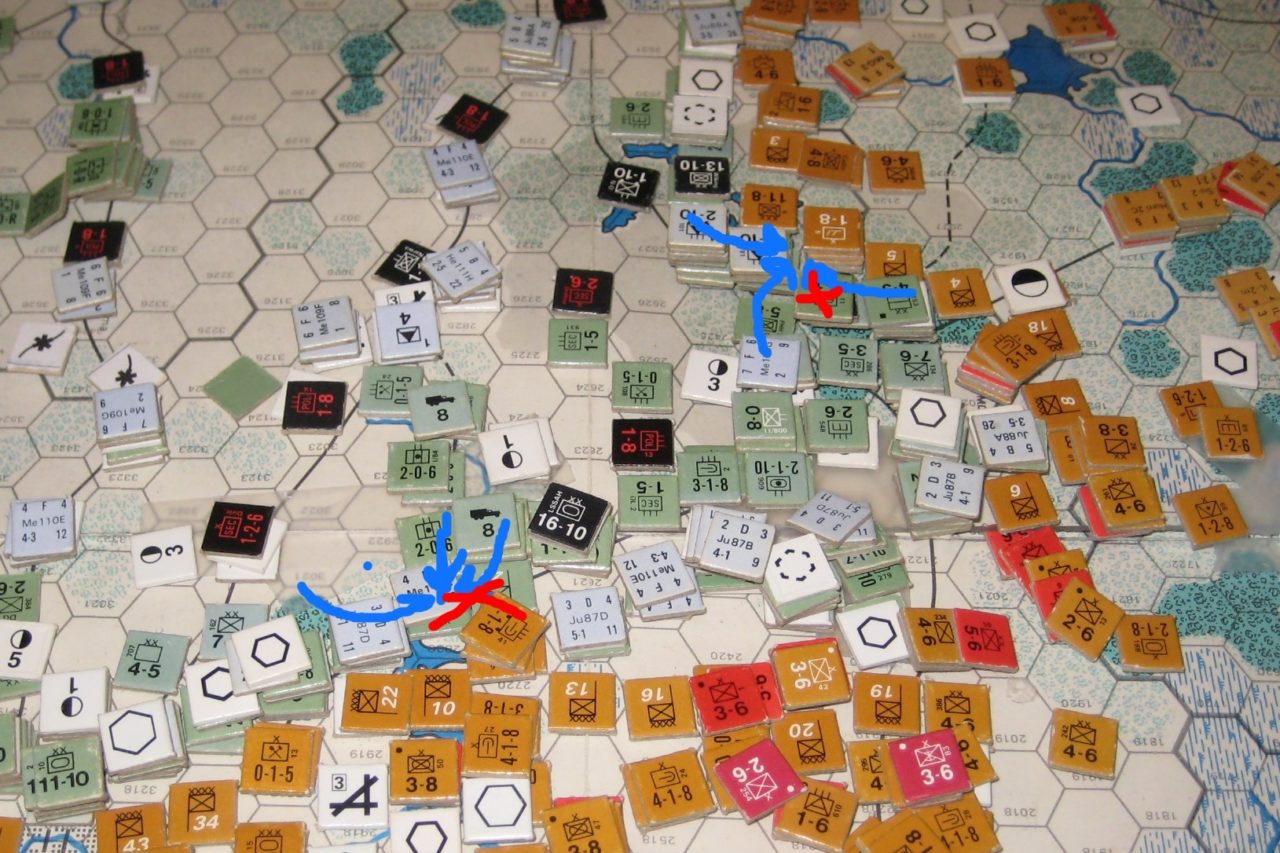 The Axis counteroffensive in the North ends in a bloodbath

AGN The soviet drive which project one hex into the line occupying the vital railroad from Veliki Luki is assaulted and eliminated! But in an exchange infliction a 24 point loss on the Axis attacker.

3 fortified hexes which now project into Soviet lines are evacuated except for two 3-6 infantry cadres and in the case of the position in front of Kalinin a 5-6 infantry division. Acting as groins to take the power out of the Red Tide they are designed to minimise the enemy’s ability to launch multiple hex attacks against the main line at these points. They also prevent lateral movement along the line. They are provided with maximum DAS to force the Soviets to commit additional forces against them. It is hoped that collectively they will allow at least one turns respite from the blows raining down on the German positions.

AGC: The boundary is contracted north to give operational control of Qxbow to AGS. 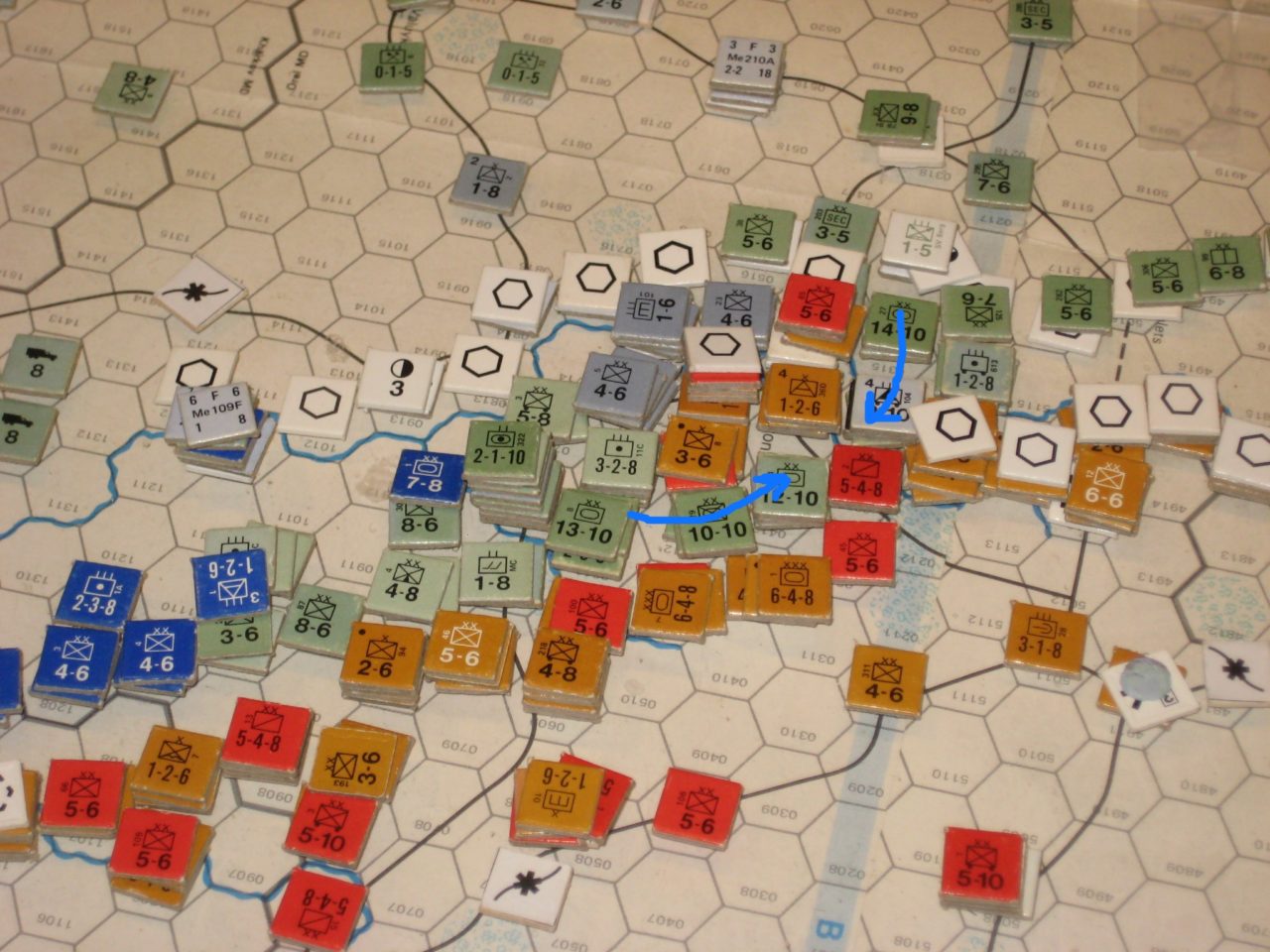 AGS:  The Oxbow phase two swings into action with a second assault being launched North of Voronezh. This attack lead by Das Reich slices through the Soviet fortified line (which has been present, unmolested, since the Axis high watermark of 41) This supports the continuing thrust north which is hooking behind two fortified stacks on the river.

Unfortunately for the attackers the DH results allow remnants to fall back onto the rail line and deny the Axis any exploitation to isolate the city leaving the southern schwerpunkt vulnerable to counter attack. An attack a few miles south by Rumanian and Italian forces eliminates a defending Soviet stack and advances.

Air Combat: In the north most short range bombers and dive bombers are tasked tio provide DAS to the front line particularly over the front line. An air strike eliminated a Guards IL-4 p on the ground and 3 rail hits in the centre attempt to limit any Soviet rail reinforcements reaching the Oxbow engagement.