The Soviet advanced units in the centre find themselves out of supply and unable to survive the German counterattacks in a single stacked deployment. They therefore make no further move West but instead concentrate on picking off stragglers and isolating as many of the larger German stacks as possible for the slow-moving infantry and artillery to pound these adversaries into submission later by brute force.

Leningrad Front: Soviet forces move to contain the German spearheads counter-attacking the link between Wiking and the main front. They successfully maul the link which loses half its number and retreats in disarray. Viking is again isolated. Success is also achieved against the 11-10 panzer grenadier unit isolated 60 miles north east of Riga which is eliminated.

Moscow front:  As indicated above the lead elements here are out of supply and vulnerable to counterattack from the powerful German mechanised forces roaming East of the upper Dneiper.

The emphasis is in isolating the more powerful German units and so Mech and Tank corps concentrate against the link between the pair of stacked 16-10 panzers and the main front. They can only manage to retreat the defenders but nevertheless succeed in isolating the 16-10s

North of Bryansk a number of attacks pick off some stragglers but a security division in woods south of the city executes a well ordered retreat in the face of Soviet attacks. 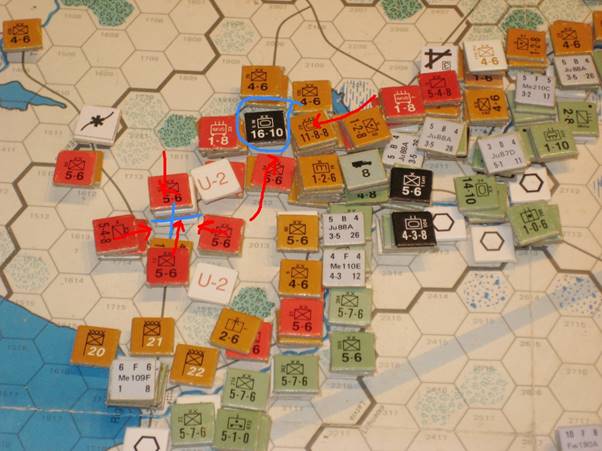 Stalingrad front; Dormant for a long period this front has improved its supply situation such that most of the forces are now within range of a supply head. This enables them to concentrate and execute a series of low odds attacks against the retreating Rumanian’s with some success although a three hex frontage attack out of Voroshilovgrad breaks in the face of stiff opposition and flees East abandoning the recently gained city.

Air War; Foolish unescorted raids into northern Poland around Wilno to disrupt the German rail net results in the loss of 2x IL-4s and an A-20G. Meanwhile in the Centre a JU188c is downed and an Me 109G eliminated whilst undergoing repairs on the ground.