Frank acknowledges the tap on the shoulder with a nod of his head, he rotates through 180° and craws flat on his belly. Sliding out of his foxhole as stealthily as humanly possible he glides down the slope to his rear. Once he is clear of the ridge he rises to a crouch and moves quickly towards the field boundary where he is met by his platoon comrades. Together they skirt along the hedge then through a gap into a defile beyond. They transfer to a trot for half a mile down a dirt track to the agreed assembly point. There are gratified that they hear no signs of a pursuit. The waiting troop transport is slid into neutral gear by the driver and rather than mount the vehicle they assemble behind the lorry and push it down the slightly inclined road. Half a mile further on they deem it safe to mount up. When all are safely aboard the driver engages gear and drives as quietly as he can westwards.

Daylight breaks into light snow flurries but by now they are travelling at speed along dirt roads. They are halted 5 miles along by a brigade commander in charge of a Recon unit with half tracks leaguered at a crossroads.

He shouts to the driver “Enemy contact ahead, get your man out and form up it looks like we are going to have to fight our way out after all”

Sure enough at the next village they are heavily engaged by enemy troops ensconced behind rudimentary barricades but supported by two T34 tanks.

Just as it appears to Frank that their great escape has been thwarted at the last hurdle the T-34 immediately to his front which had been traversing its turret towards him spectacularly explodes in a sheet of flame. The turret rises into the air and crashes down just 50 yards in front of him. Seconds later the other T-34 meets a similar fate to the astonished, grateful, cheers of Frank and his comrades.

Through the snow flurries a huge hulking machine resolves itself into the unmistakable shape of a monstrous 54 ton Tiger tank. With Skeleton Keys adorning its turret Frank and his comrades know that SS Leibstandarte Adolf Hitler has arrived and with it their salvation.

Weather: 6 rolled, so Snow across the whole front from the Arctic to the Crimea, only the deserts of the extreme south remain free of the snow falls.

Army of Norway: German units form up in a crescent at Kautokeino protecting southern Norway: anchored on the Swedish border and the coast. Engineers prepare to fortify the line near the coastal end but the need for resources on the main front means they are likely to wait for some time the means to do so. A single SS infantry regiment remains on the Kirkenes road to retard the Soviet advance from the north.

AGN: The worsening weather and the desperate cries for assistance from Army group Centre determines that the ill-fated pipedream of an offensive into Estonia is called off.

Already Soviet countermoves have isolated a panzer grenadier division and an SS Tank division. The former is provided with air cover and supplies because no escape route is viable. The latter attacks south with assistance from the main front and breaks back into the bridgehead over the Divina which is widened in a secondary action.

AGC: The fortuitous arrival of LSSAH (20-10) and 4th Panzer (17-10) into reserve last turn south of Smolensk allows the Germans forces to mount a relief attempt towards the northern pocket of troops trapped by the Soviet advance. One weakness of the Soviet position is that the connecting corridors to the Russian lines for supplies and which separate the various pockets of German forces are weekly held. This allows a stacked pair of 16-10 panzers to attack south and connect with their colleagues struggling west. Operation “Winter Breeze” comprising of LSSAH, 4th Pz, a 2-10 Luft flak and 1-7 security regiment attacks into light snow flurries from outside the pocket and blasts through an 11-10 Sov Mech XXX holding the ring which finds itself trapped between the relief force and the troops fighting desperately to reach the safety of the main front.  The elimination of this unit allows the two 16-10s and a third16-10 with a motley crew of mobile artillery, Pzg cadre, rocket unit to establish a supply corridor to the accompanying Trucks and form a front line in exploitation. The commander of the rescued troops declares “Please inform the the Fuhrer that the reports of our deaths have been greatly exaggerated”. A 7-8 pz cadre is the price for this escape (HX). 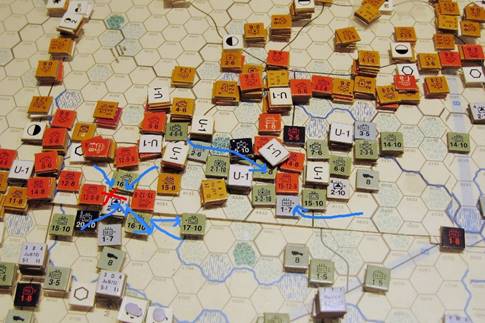 The weaker, less mobile pocket, north of Bryansk does not have the succour of a relief effort but does manage to exfiltrate through the thinner Soviet line here and connect with security forces which move from their anti-partisan positions on the Bryansk-Gomel rail line. For the moment therefore these units also break the isolation.  An infantry division holding a fortified position now deep in Soviet territory holds firm and prepares to fight to the last man and bullet.

AGS: Unmolested by Soviet attacks the southern part of the front continues its controlled retreat West falling back a further 30 miles at its easternmost extremity. The line is now almost at Rostov and with the equivalent of a German or Rumanian division with supporting anti-tank units in each hex is sufficiently strong to prevent any significant attacks from the pursuing Out of Supply Soviet forces.

The northern, left flank, of this Army Group however has become separated from the remains of Army Group Centre which is falling back west from Bryansk. Fortunately, the Soviets do not have sufficiently strong mobile forces to take advantage of this disconnect.

Air Combat: The Luftwaffe and its allies concentrate on supporting troops in the front line with DAS. This results in interceptions by Soviet fighters who gain the upper hand in a number of encounters resulting in five losses for the Luftwaffe against two for the VVS.

Another night raid is attempted against the Stalingrad factory which is again repulsed by dense clouds of anti-aircraft fire which down the escorting night fighters and return the bombers.