Narrative: A Tale of Two Cities

Voronezh, Southern Russia: The Soviets attempt to bludgeon their way through to reach their trapped comrades in the city with two parallel attacks. These are low odds 2:1 thrusts, the rightmost with NKVD political support. The left flank makes good progress pushing the defending mixed Axis forces back 16 miles and establishing a bulge into the Axis lines to the southeast of the city. By contrast the right thrust after initial success becomes bogged down by the mud and stiffening enemy resistance. They reach within 5 miles of the city before being halted by massed artillery firing over open sights from German, Hungarian and powerful Italian pieces. The lead tanks are checked and as the already sodden earth is churned to a moonscape they pull back in disarray to the start lines. The fate of the city is sealed.

Turku, Finland: The final assault is launched, and the defenders are eliminated without loss to the attacking forces. The last bastion of organized resistance in the Finnish Area of Operations has fallen. With this defeat which eliminates the last Finnish ground units and secures the last Finnish owned city, peace of a sort, reigns over Finland. The Air force transfers to Sweden and is interned.  Mannerheim and top government representatives are commanded to Helsinki and met by the Soviet Commander in Chief Southern Finland Area of Operations and the Surrender is signed, effective 1 May 1943.

The humiliation of the location and lowliness’ of the Soviet Officials present is not lost on the Finns and almost immediately a resistance movement is formed to continue the fight by other means.

House Rule: I am generally opposed to house rules and have no others in play but it seems to this writer that given the Finn’s love of country, fighting prowess, woodsmanship and mastery of irregular warfare an effective partisan movement would arise to continue to harry the Soviet occupation forces. To represent this I suggest and will use the following House Rules;

New Rule 32.B.3a Finland Garrison; Following the Surrender of Finland the Soviet Union is required to occupy certain hexes in Southern Finland (as defined in 32.B.4c) no later than the end of the second Soviet player turn following Finnish Surrender. Each location must have a RE equivalent of Garrison Forces as follows;

Major/Dot City, 3REs, Reference City/Printed Fortress, 1RE. Garrison forces can be any combat unit with a printed attack strength of 1 or greater.  Failure to establish or maintain the Garrisons has the following effects:

New Rule: 32.B.3c. Soviet Anti Partisan Forces; The Soviet has the following Anti-Partisan forces available which operate per RAW Rule 33.C; All NKVD regardless of branch of service, all penal units, all Ski units.

The 2-8 mtn cadre on the road to Ivalo; starved, surrounded and alone surrenders.

The Soviets expend the single Inf RP trapped at Voronezh to rebuild a 1-2-6 para airborne unit. ¼ ‘ered for lack of supply and support it nevertheless adds a ½ point strength to the defenders thwarting the Axis planned Overrun in the initial phase; much to their chagrin.

Finnish front.  Northern forces continue to inch forward toward the Norwegian border and build against the Murmansk perimeter.

In the south Turku falls to a less than certain 4:1. With no Finnish forces surviving anywhere the surrender has no implications for the fighting in the far north and most Soviets have already begun moving out of theatre, or north. The surrender will therefore be a formality. (But see house rule above).

Leningrad Front: The sacrificial two hex bulge on the corner of the German lines north of Kalinin is attacked but DAS plays its part and the results are favourable to the defenders with one retreat and one NE!

Moscow Front: South of the former capital an attack against the German lines pushes them back 16 miles and eliminates their fort but a well prepared defence allows them to fall back in good order to a pre-positioned fort behind the MLR. 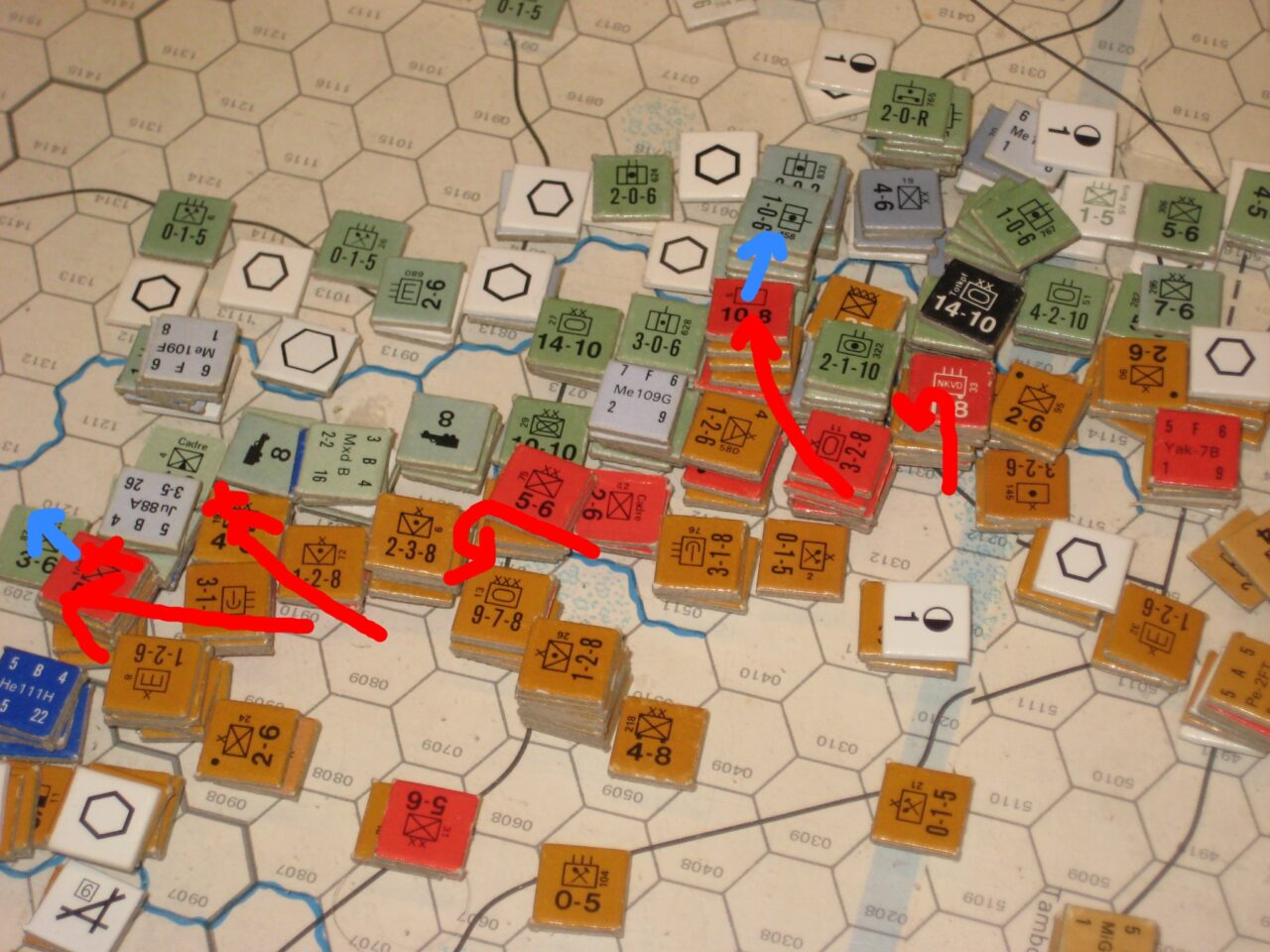 The Soviets fail to relieve Voroneszh

Voronezh Front: In addition to the direct relief attack against Voronezh the Russian forces continue to push against the Axis lines to the south in a move to regain the east bank of the Don. Once again lady luck is with the Axis as where eliminations are needed retreats are obtained and where a retreat would suffice an elimination opens a tempting gap with no forces in place to exploit it. Nevertheless 16 enemy attack points are removed from play.

Air Combat: The VVS launches a number of sorties against critical road junctions and routes. They change tactics over previous months and while unsupported long-range raids are still made these are supplemented by high intensity short range escorted missions radiating from Moscow and the new forward air bases. These raids hit 6 targets including critical junctions but at a cost. For although 5 Air-Air hits are traded the VVS takes 4E and 1A while the Axis 2E and 3A.

Across the front short-range aircraft transfer to a number of newly built forward air basses to be in position to provide air support for the planned Summer Offensive.