AGS is desperately fighting to capture Voronezh from the Soviets before the start of the Summer Campaigning season.  The battle has been ranging for the city over the last two months and the struggle is nearing its conclusion. The following is an analysis of Axis options.

Analysis of a battle

for Voronezh and adjacent fort:

Strategic Overview – The Soviet counteroffensive which blunted and reversed the German attempt to end the game by the isolation of Leningrad and Karelia has now run its course in the north. The Soviets have throughout the winter pressed forward in central Moscow and the Axis now only hold 1 hex of the city. In the South the Axis Summer 1942 offensive gained the great bend of the Don and Rostov. The front line runs from that city north around the bend of the river then running around the west side if Voronezh, all the time in contact with the Soviet fortified defensive MLR. North of Voronezh the lines then diverge running north to Tula which is a large 7 hex fortified hub anchoring the southern end of the Soviet defence of Moscow district. Again in direct face to face contact the opposing forces follow the river line to Moscow then directly north through Kalinin to the Valdai hills where the lines turn westward through to north of Veliki Luki. From here the lines diverge again to swing directly north. Lake Piepus separates the forces to the Baltic at Narva.

Voronezh area in detail: Just south of Voronezh the geography and rail net is such that the Soviet fortified line east of the upper Don was out of supply while the Axis to the West were in supply part stretched by truck transport.  Thus the Axis attempt to gain some momentum by attacking this section of the line with the hope of drawing off some forces and easing the pressure on the retreating Axis forces north of Moscow an aspiration, unfulfilled was to cut the main line north from Stalingrad forcing a wide detour for enemy forces moving north.

The attack was launched and initially made good ground against the out of supply Soviet defenders stalling when Soviet reserves reached the front and the Soviets retreated into a supplied position.

However the Axis took advantage of Soviet weakness and lack of mobile reserves in the area and swung North behind Voronezh with a second pincer moving from the north. These met and isolated a pocket containing the city and 4 stacks of units including Voronezh and an adjacent fort.  Two turns of pocket reduction have resulted in the current situation.

This comprises an isolated pocket of the city itself and a fortified clear hex immediately to the southwest of the city. The Soviet front line is separated from the city by a single hex occupied by strong Axis (mainly German) mobile forces too strong for in-theatre Soviet forces to unseat.

The conundrum faced by the Axis forces is what action to take next.

The Axis face a number of options

On the tactical level the city and adjacent fort are both stacked to the full with 26 and 21 points respectively. The city has NKVD political troops present which would prevent the retreat of cadred survivors and there are three Guards infantry divisions present which would give a residual post combat value of six points. Even if these were halved owning to a deteriorating supply condition any overrun or attack would be halved due to the city so over-run in the mechanised phase is unlikly.

Options four and five are not considered advisable given the timeframe available and are quickly discounted.

The Axis consider the other 3 options in detail.

Voronezh is surrounded on three sides by rivers the adjacent Fort to the Southwest clear hex also has rivers on three sides, one of which is that between the city and the Fort. The total number of hexes surrounding the pair is eight of which two have the opportunity of contributing their strength to either hex.

In considering available forces I have included all those which could reach any hex adjacent to the defending units by normal movement and have for the purpose of simplicity excluded rail movement from any distance.

Option one  of attacking both the fort and adjacent city in one turn is examined by a crude examination of the force ratios to avoid moving units prematurely. Axis stacking points are reasonably evenly distributed around the perimeter although do vary in terms of the strength. They have available a total of 25 divisions 17 non-divisional units and 16 artillery units. In addition there are a number of railguns which can be added to any attack on Voronezh. A simple calculation will show that there is an excess of one division and one non-divisional unit which can be committed from those available. A German infantry division and an Italian ski unit are excluded. A count of the total strength which can be brought to bear against the two hexes divided by the number of hexes reveals an average gross combat strength of 28 per hex excluding artillery.

However due to the terrain it is necessary to modify this figure to account for the rivers and the city. Of the total hexes three are across rivers into Voronezh giving an effective strength of 7 each; One hex is across open terrain into the city while two are across rivers into the Fort thus each of these hexes would have an effective strength of 14. The remaining two hexes are open ground into the fort and thus unmodified. This produces a total non-artillery contribution of 119 factors with 25 additional unmodified artillery points. Added to this are 18 siege railgun factors which will be directed at Voronezh and are doubled producing total attack strength of 180 points.

The 180 attack points is divided by the total defence strength of 57 points. Both hexes enjoy -1 modify because of the fort modifier and a lack of engineering assets against the city.

This is very crude analysis does not allow for the shifting strengths between the two targets from the co-joined hexes but nevertheless it shows convincingly that the attack ratio will be in the region of 3:1  and with a -1 modifier this is an unacceptable risk both in terms of exchanges and the possibility of a retreat which would eliminate further units from those holding the perimeter where Soviet forces outside the ring are adjacent to the attackers.  Accordingly, therefore an attack on both hexes must be discounted.  This leaves only options 2 and 3.

Option two or three, an attack on either the Fort or Voronezh In considering which of the two hexes to attack first the Axis are mindful of a number of factors. If they attack the city first and are successful, the incentive for Soviet forces to continue to press the counterattack will be diminished as it would only be rescuing a small force within a fort. On the other hand the fort can be more easily eliminated as it is slightly weaker and less well protected by rivers.

On the other hand if the Fort is attacked first this can be destroyed in its entirety because it doesn’t have the benefit of a NKVD defender and the city is fully stacked so no retreats would be possible by any surviving cadres.

On balance the Axis decide the safer course is to eliminate Fort first and then concentrate in full against the city attempting if possible in the two turns this will take to create a supper stack strong enough to overrun the 3xGuard cadres which would survive such an assault and thus shorten the siege by  a turn and by which time, assuming no soviet breakthrough half strength.

This having determined the size and target of the attack forces are moved into place and a detailed calculation is carried out.

The Fort is attacked at a ratio of 7 to 1 with a -1 modifier.  It is eliminated in its entirety and the Germans holding the outer ring exploit to prepare for a Soviet relief attempt. 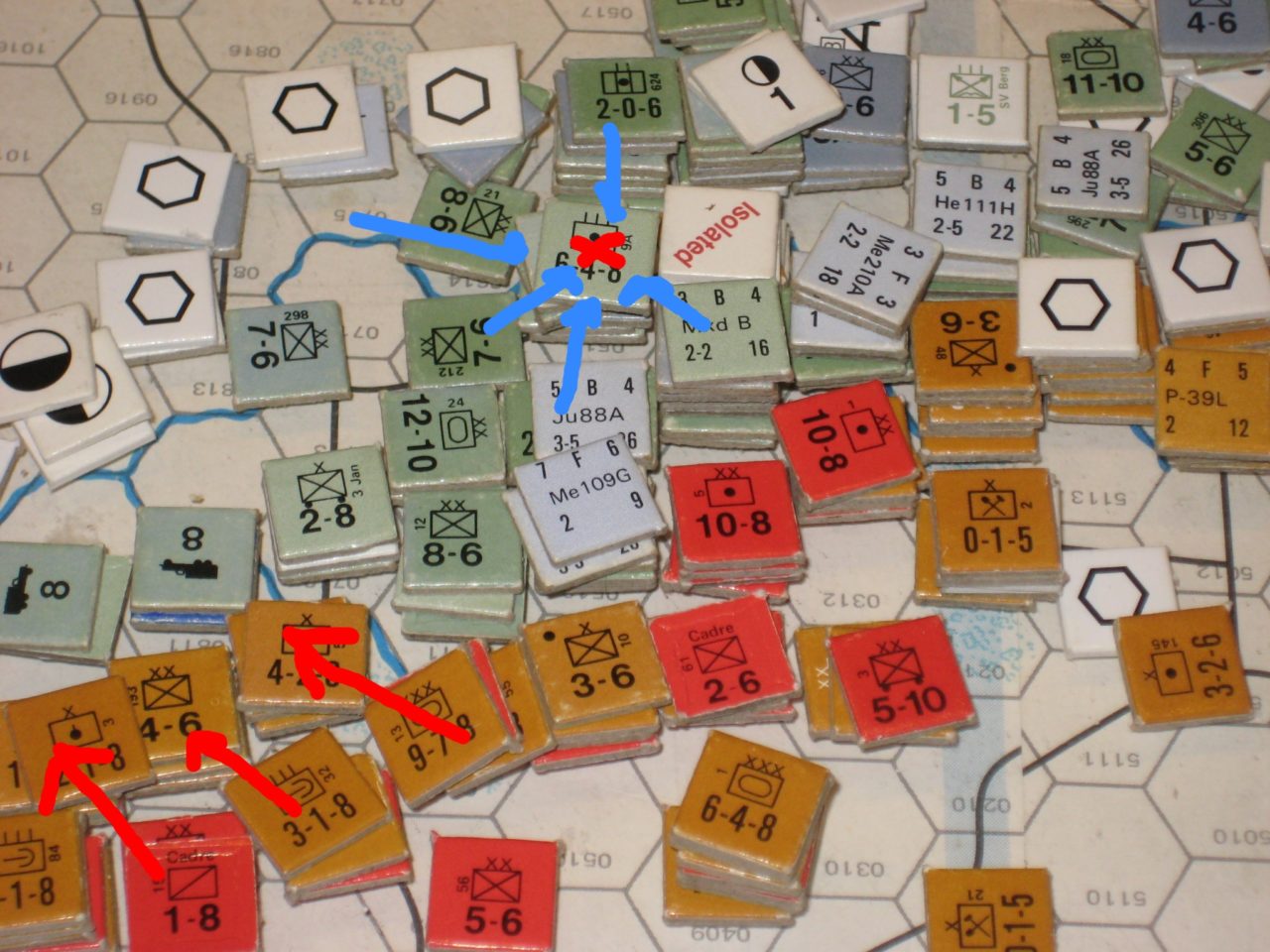 Weather: No change Mud South of the B line, snow to the north

Finland & The Army of Norway: The last remnants of the Finish Army in the south converge in Turku and await destruction.

The Murmansk garrison counterattack a Soviet ski incursion attempting an end run along the coast and burns two RPs to bring in air cover and secure a safe attack. The perimeter is straightened but there are no RPs left for future operations.   Murmansk is supplied by sea and is a tough bastion but is the commitment of 5 mountain divisions warranted? Norway remains largely undefended and shipping troops there will reduce the supply to Murmansk. Some interesting dilemmas for the Germans here over the coming weeks and months as Soviet troops draw ever nearer to the Finish/Norwegian border.

AGN: On the Leningrad axis the annoying part supplied one hex intrusion in the line is finally attacked and nipped off.

Elsewhere the Axis forces take advantage of the scaling down of the Soviet offensive operations and extracts 3 Panzer divisions and supporting troops from the line. This reduces the defences and will potentially expose one or two hexes to a massed infantry assault but is considered a risk worth taking to form a mobile reserve against the expected Soviet Summer Offensive.

AGS: Per the preamble above the fort hex adjacent to Voronezh is attacked at safe odds and eliminated without survivors. Only Voronezh itself remains to be eliminated to secure a locus of future defence in the south/central area. The Axis forces are keen to conclude this as soon as possible to redeploy the mobile forces before the summer campaigning season.