The soviets have suffered countless blows at the hands of Germany and her allies but are certainly not out of the game yet.

Local counter offensives across all of the active theatres inflict heavy losses on the Axis forces. Among the highlights:

Partisans: Inflict 5 more rail hits this turn although not all are against converted lines most of which are held by security forces. 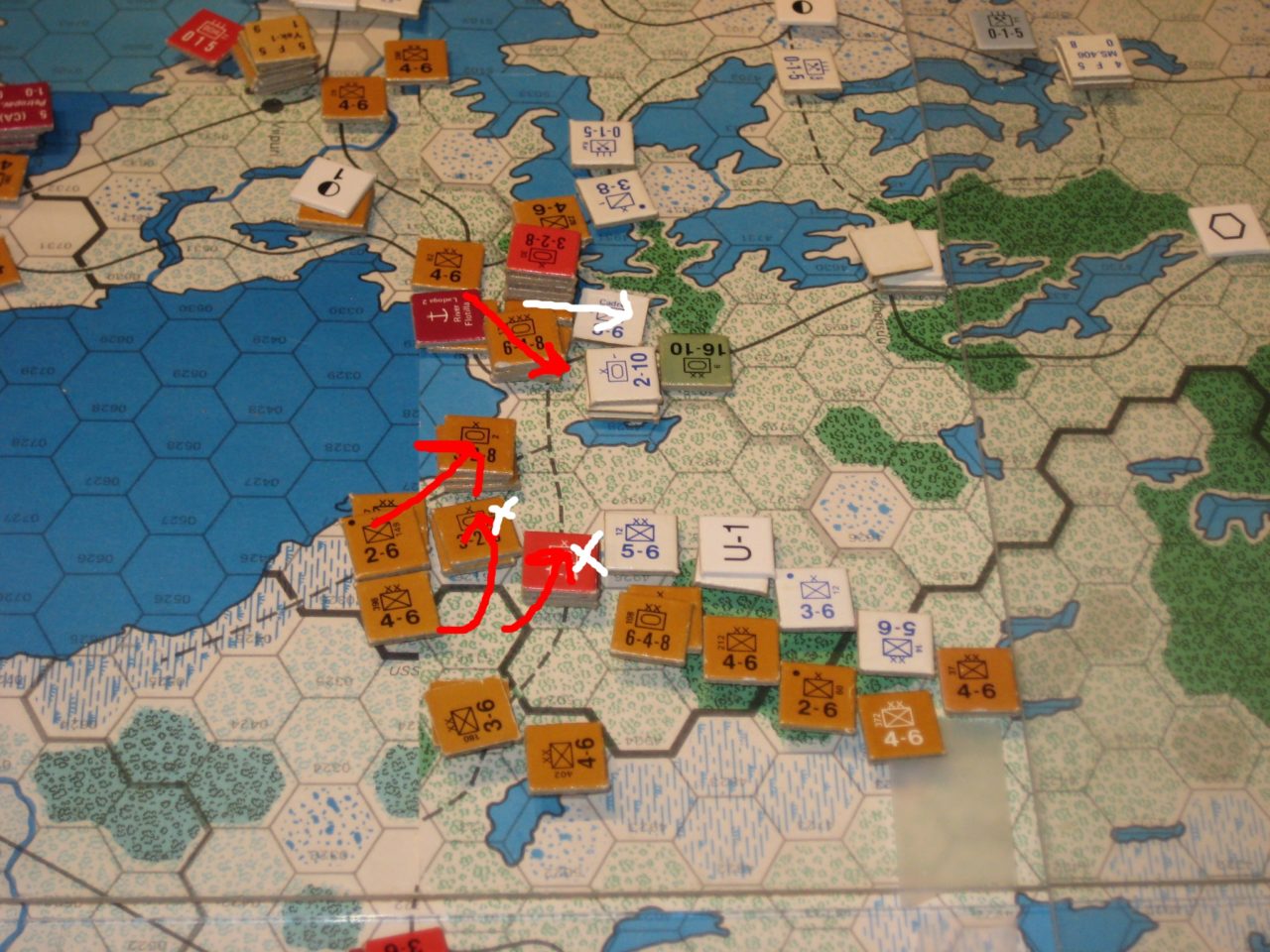 Finish Front: North of the Arctic Circle a smattering of reinforcements fill gaps in the line stiffening resistance.

North East of Lake Ladoga Soviet mech and infantry forces advance to surround and pin a mixed German and Finnish stack which is eliminated while a Finnish cadre is also wiped out,

At the Northern tip of the lake forces driving from Leningrad eliminate another stack cadr eing an infantry division and taking an artillery regiment out of the game. As previously the Soviets know time is on their side in this theatre as Finnish losses mount well past their ability to replace them. The Soviets therefore do not risk a deep penetration. 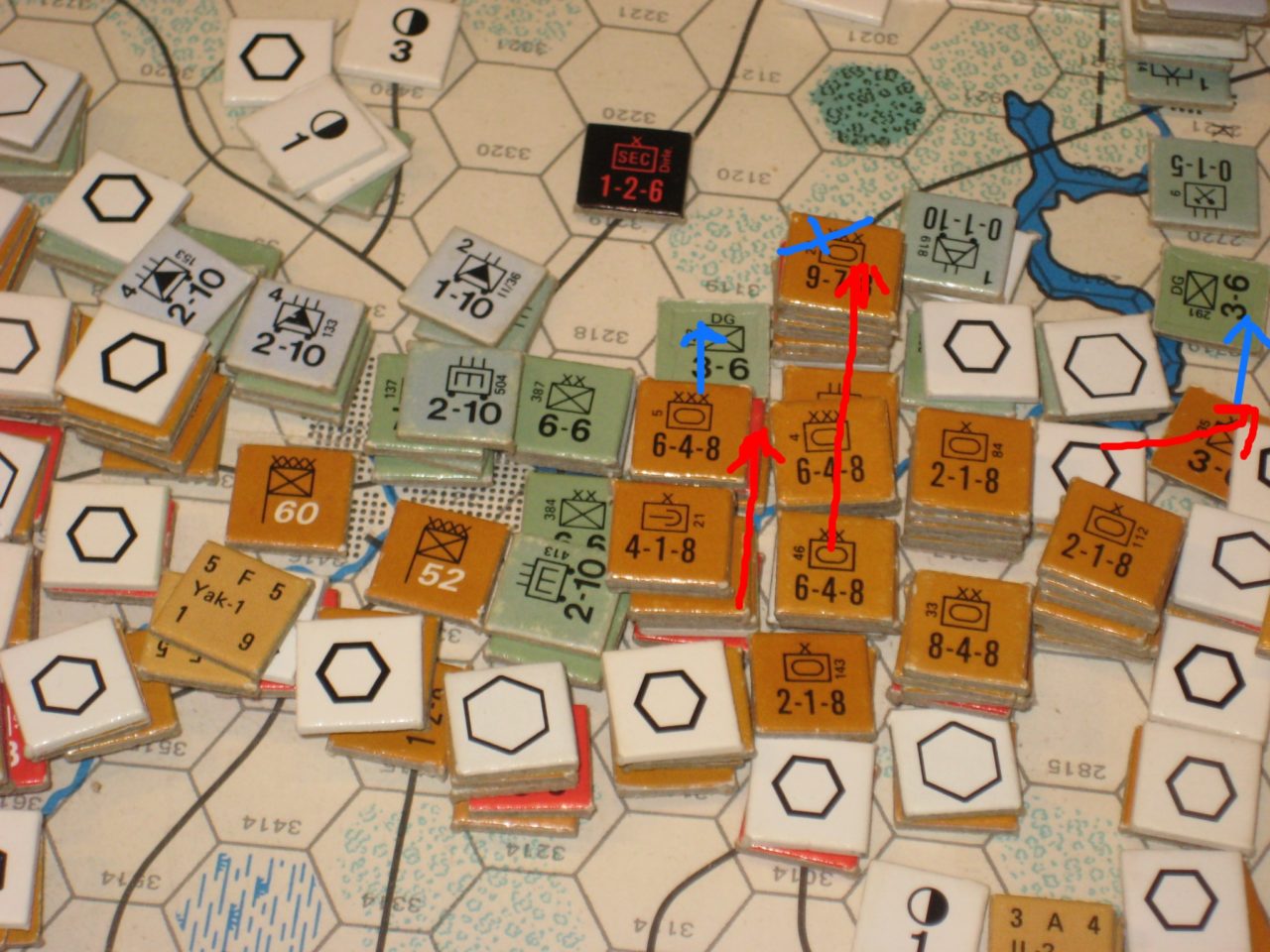 Leningrad/Moscow Front. The Soviet Strategy on this front is to mount an offensive operation over the Volga Canal immediately north of Moscow. German entrenched divisions across the river are caught by surprise as a thousands of rocket tubes in the largest concentration of the war fire from their lines on the East bank of the river along a front 80 miles wide. Their fury is unleased as 6 tank corps including 3 upgraded 9-7-8s launch across the river.

One attack north of the lakes is simply designed to pin German opposition. It eliminates a fort and cadres the defending division but only a lone 3-6 inf xx advances across.

Directly north of Moscow the attacks cadre two divisions. Both retreat, one onto a 1-10 AA regiment guarding the airfield beyond. This stack is overrun by the Soviet Corps in the exploitation phase as second echelon troops fall in behind and drive 60 miles into the German rear.

On the Vologda sector two further attacks are launched designed to pin the German spearhead and limit the redeployment of forces to counter the Soviet advance. The attack south of the bulge 50 miles West of Yaroslavl drives 12 miles into the front before being halted by stiffening German resistance.

North of the bulge however confusion reigns in the German rear as a panicked panzer division flees 30 miles as the front collapses and Soviet tanks breakthrough the German line. They exploit a further 16 miles before being halted by the now halted panzer but their drive yields a spectacular dividend. Caught completely unaware is the main German Rail Assault stack comprising 1x 4-0-R, 2x 3-0-R and 4x 2-0-R which is overrun; the sole Flak battalion defending the stack from air assault offering little resistance to the massed guns of the two stacked tank Corps. 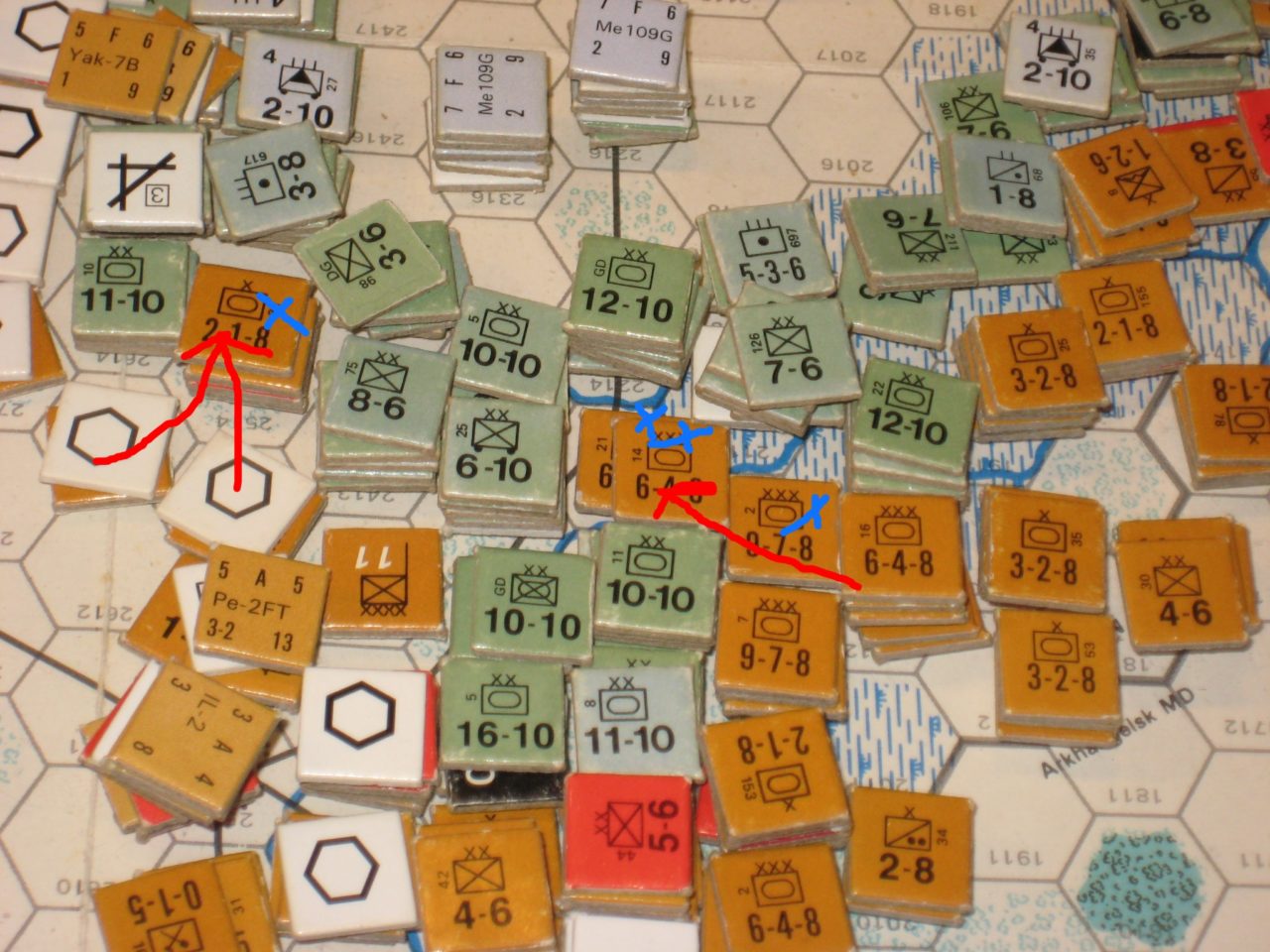 Voronezh Front – The Soviets contemplate a general assault to support the moves to the north and south but the forces have already been stripped of all offensive capability which makes any such move unviable so the sector remain quiet.

Rostov Front:  In a move designed to ease the pressure on the cut off forces south of Stalingrad the Soviets launch a limited offensive over the Don north of Stalingrad. Cadreing a German division and eliminating a Rumanian 3-6xx they advance in an arch from the breakout point in a South Western direction. Rumanian and German infantry lining the West bank ensure supply is still fed to their troops but the move is such that they will in their turn need to decide if they fall back or seek to hold the river. Axis reserves are limited in the area of the Soviet breakthrough and so the Soviet General Staff anticipate a general retreat by the enemy.

The cut off forces south of Stalingrad coalesce around the German units trapping them and launch local counter attacks where they can. The swirling battles on the open plains eliminate 2 x 2-1-10 Stugs and cadre a 12-10 pz division. The freed main Soviet force exploits back into supply. The two German Mech divisions who penetrated deep into the North Caucuses and a further panzer division around Stalingrad a re in turn trapped East of the Don. 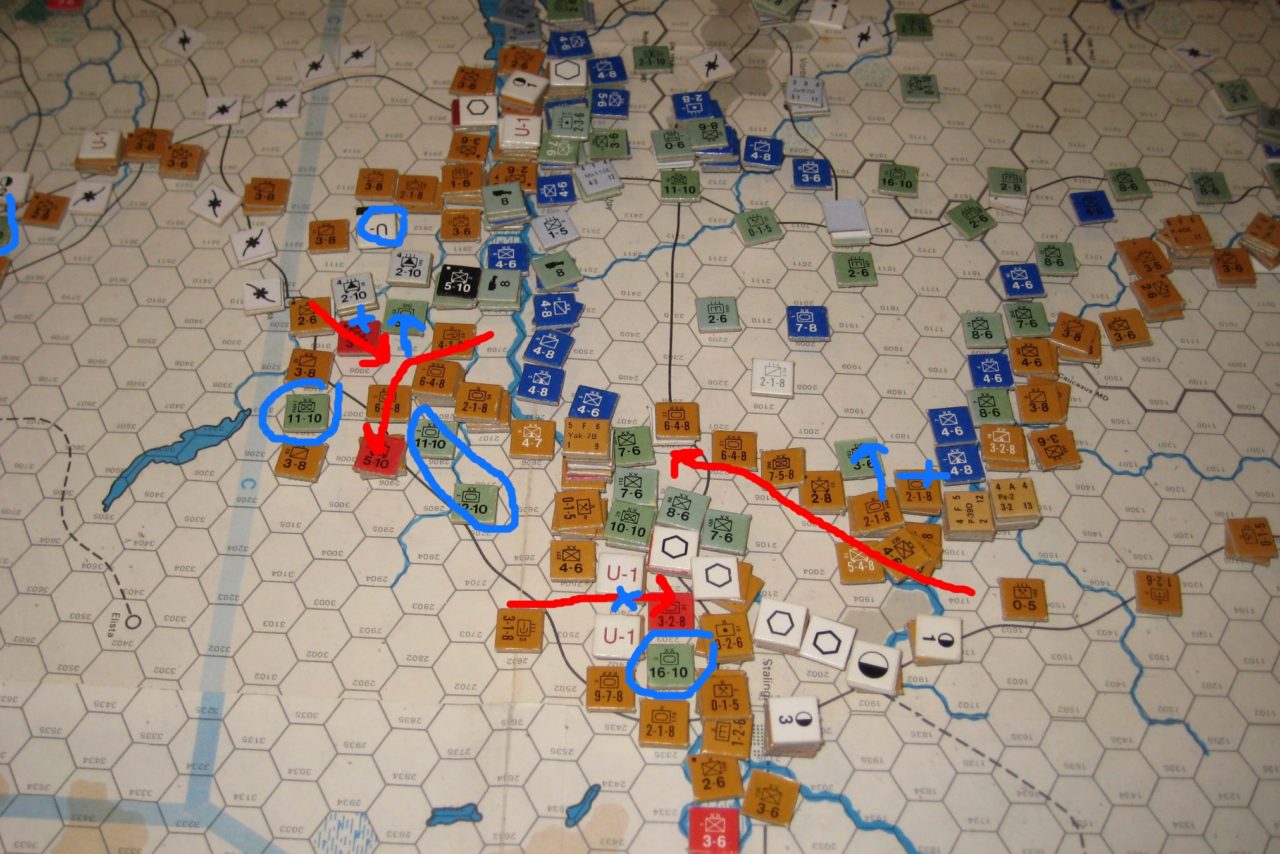 Air War. In the south the Soviets aid attacks where needed out of range of German fighter cover still West of the Don.

In the north one large attack supports the soviet mechanised attack to the north of the main German bulge but German fighter opposition is poorly co-ordinated and no losses are inflicted to either side.

Otherwise the VVS concentrates on interdiction and flies 15 raids against the rail network inflicting 8 hits and limiting Axis response to the breakout north of Moscow. Critically two hits are on the rail line through Kalinin the main route for German forces transferring south from their heavy concentration in the north.

With no massed air battles taking place losses are light and each side loses only 1 aircraft.