Weather. Rain in the Arctic (Zone A = Mud) presages the start of winter.

Operations Meat-grinder and Fishhook operate true to their names

This is a turn of slogging and slicing as AGN and AGC grind forward at a snail’s pace while AGS bursts out of its bridgehead south of the Don to the east of Rostov and wheels…….?

Finland & The Army of Norway: In the far north and central Finland troops slowly move into attack and/or blocking positions. German forces welcome what meagre reinforcements OKW deem to spare for this theatre. (a few ski and high mountain battalions). No attacks are made.

AGN:  German forces gain another hex directly north pressuring the rail-line to Leningrad still further and threatening to cross it 80 miles east of the existing occupation. A Mech and Panzer division are sent to help with this drive.

In the main drive East directly north of Yaroslavl, Axis forces are content to eliminate a one hex bulge in the line and widen the bridgehead from the bend north of the city by two more hexes. One of these attacks offered the opportunity for a further hex advance by overrunning a Guards Cadre in the exploitation phase but the force needed to achieve the required odds would leave no backup or follow up forces so the move is considered too risky given the preponderance of Soviet armour in the area.

The force which failed to eliminate the fort east of the upper Volga NE of Moscow is redirected 40 miles NE and eliminates another one hex bulge in the line.

AGC: No activity other than the final completion of the cross rail project linking north and south in a complete rail network – however security is not sufficient to protect the whole network and engineers are positioned to repair partisan damage as it occurs.

AGS: A Hungarian attack seizes Taganrog while Rumanian/German forces eliminate the other islands of resistance north of the Don outside of Rostov’s fortified ring. One Rostov fort is taken by direct assaults but the defenders fall back in good order into the city.  Only Stalino remains defiant brushing off a combined Rumanian/Italian assault. (4:1 (-1) = NE).

South of the Don the middle of the doughnut of the Axis two pronged Don crossing which is held by a 5-6 Guards infantry is eliminated by infantry who crossed and massed artillery on the north bank with some armoured support from the advanced force turning inward. 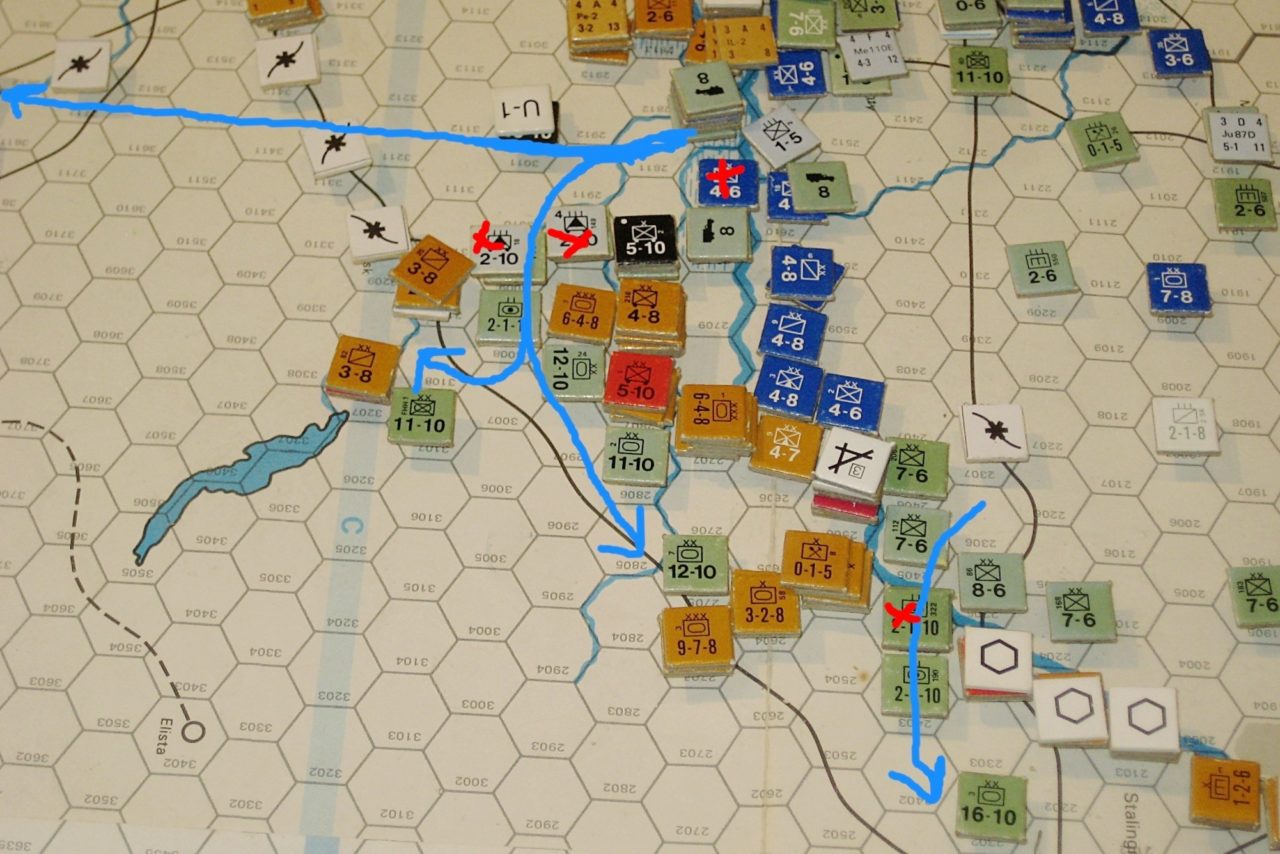 The Axis break out!

Then in a surprise move the remaining panzers in the southern bridgehead instead of turning Southwest again to attempt a second, more sustained investment of Rostov turn instead Northeast toward Stalingrad. They smash into the hastily prepared Soviet line along the river formed by the outflow from the lake to the south. A 5-4-8 Gds Cavalry holds up the drive momentarily but the cadre is overrun in the exploitation phase as panzers move behind the Don river defenders and reach the Soviet reserve/strike force of three Tk corps and their supporting rocket, motorized and tank brigades. Simultaneously the Germans commit their last mobile reserves save for the Rumanian 1st pz and a tank division arriving in theatre and force a further crossing of the Don at a point 80 miles south of Stalingrad. One panzer swings north to ZOC the gap between the Don and Volga just south of Stalingrad to prevent Soviet counter thrusts from that direction. A mech division holds the bridgehead with a lone Stug Battalion holding a supply route open.  This move places almost the entire Soviet force south of Stalingrad out of supply.

This is not sustainable but is hoped to break up any Soviet counter attack and buy the Axis an extra turn to enable infantry and other troops to cross the Don and assault the city of Rostov from the south.

Air War: The air war follows the usual pattern of AS and DAS in the north  and wider ranging rail attacks in the south achieving 3 hits  in an aim to frustrate Soviet reinforcement movements. In a rare victory intercepting fighters sallying from Rostov down two ME110s for no loss.