“The Russian infantryman was virtually immune to seasonal and terrain difficulties, furthermore he was almost the complete master of the terrain.  There appeared to be no obstacles for the Russian infantryman. He was as much at home in dense forest as in the swamp or trackless steppe. Difficult terrain features stopped him only for a limited time; even the broad Russian streams were crossed quickly and with the help of the most primitive expedients. The Germans could never assume that the Russians would be held back by terrain normally considered impossible. It was in just such places that his appearance and frequently his attack had to be expected.

The Red infantryman could, if he chose to, completely overcome terrain obstacles in a very short time. Miles of corduroy roads were made through marshy terrain in a few days. Paths were tramped through forests; 10 men abreast with arms interlocked and in ranks 100 deep prepared these lanes in 15 minute reliefs of 1000 men each. Teams of innumerable infantrymen moved guns and heavy weapons whenever they were needed. The Russian materiel was useful in this respect; motorisation reduced to an absolute minimum, the lightest vehicles, tough horses that required little care, suitable uniforms and finally the human mass which moved all loads and performed all required tasks like a machine.”
Extract from “Fighting In Hell” Edited by Peter Tsouras c Greenhill Books 1995

Finnish Front: In the centre the Soviets launch their attack eliminating some German Ski troops. Against overwhelming odds a tough Finish 1-6* regiment holds off an entire reinforced infantry division.  The elation is short lived as news of an unfolding disaster in the south reaches the commander.

An attack lead by two Tank corps, numerous Tankk brigades, various infantry groups and shored up by massed artillery and a large air presence engages 9th panzer in a direct assault. The Germans crumple under overwhelming odds and the cadre falls back to Jonesuii. The retreat exposes the flank of the second to last full strength Finish division on this front and with no escape it surrenders to a man in the face of a second Soviet assault. There is little now to stop a Soviet breakout into the central Finish heartland. 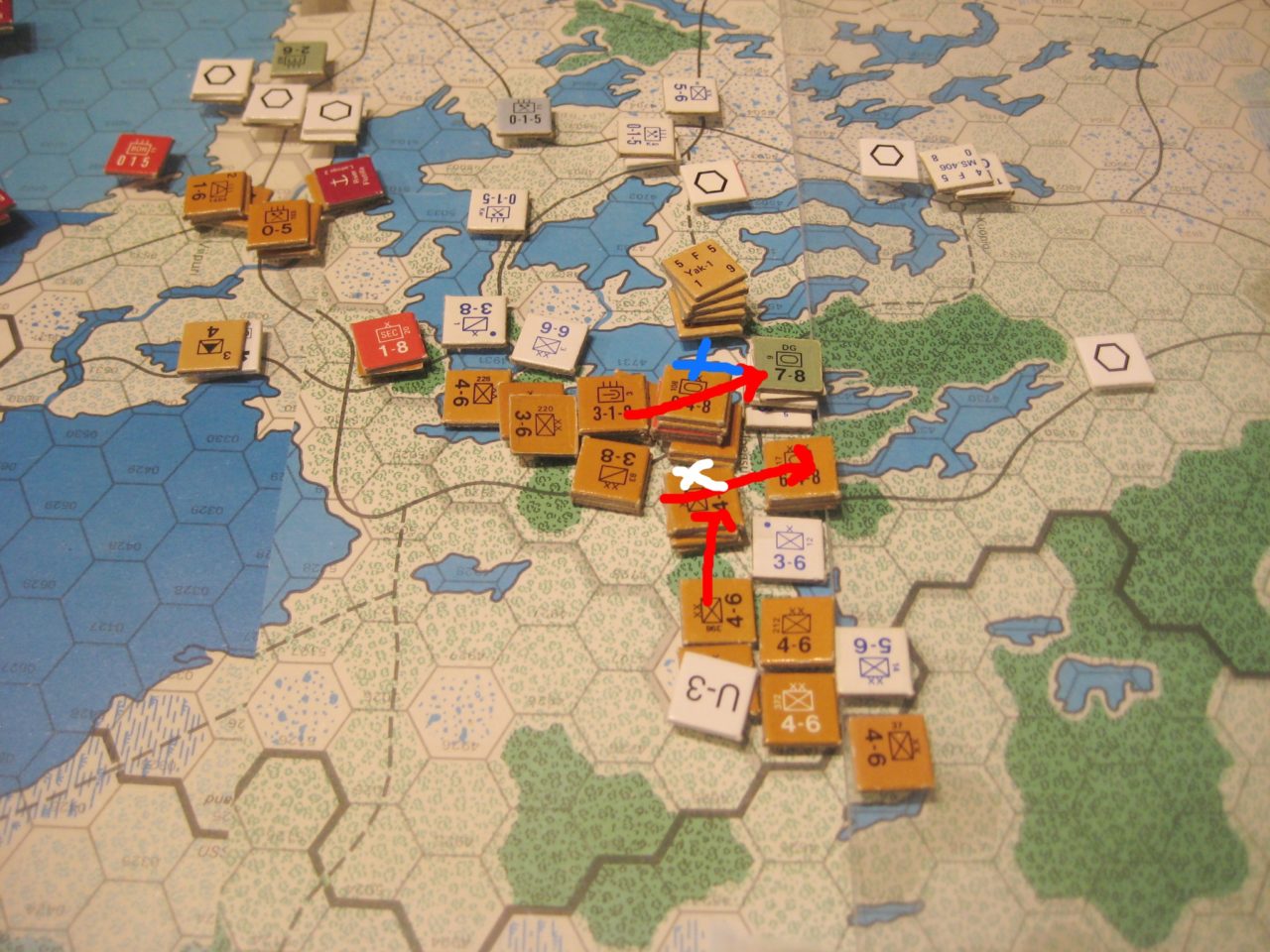 Finnland fights for its life

Leningrad Front: Soviet High Command re-designate the Front boundary at Cherepovets.  All forces to the West (and south of Leningrad) coming under the Leningrad Front, those reaming east and south to Tula form the Moscow Front including the Army of Moscow operating West of the upper Volga Canal/North of Moscow.

Sensing the time is right and fearful that every passing day could reveal the large build-up of troops to the Axis the Soviets launch a massive attack south all along the new Front.

Five attacks in all shatter the peace of this relatively quiet and hitherto defensive sector. The aim of the Soviets is to seize or at least interdict the vital rail junction north of Vyshniy Volchek. This line supplies the German drive to Vologda and its capture would plunge the entire German northern effort out of supply.

Two attacks either side of the direct route down the Leningrad/Kalinin line bypass the double stacked infantry division defenders secure in their forts but smash past their weaker comrades to the East and West. Newly raised Mech Corps and First rate 9-7-8 Tank Corp lead the advance.

To support this effort and with the secondary objective of forcing the Germans to evacuate their toehold on the Cherepovets/Leningrad line three other attacks through swamp forest and rivers rupture the German line with a single tank battalion at one point advancing to open terrain beyond. (The mud and ZOC/terrain costs prevent even the most mighty Russian formations overrunning the weakest German defenders)  In all 4 infantry/light xxs are cadred. 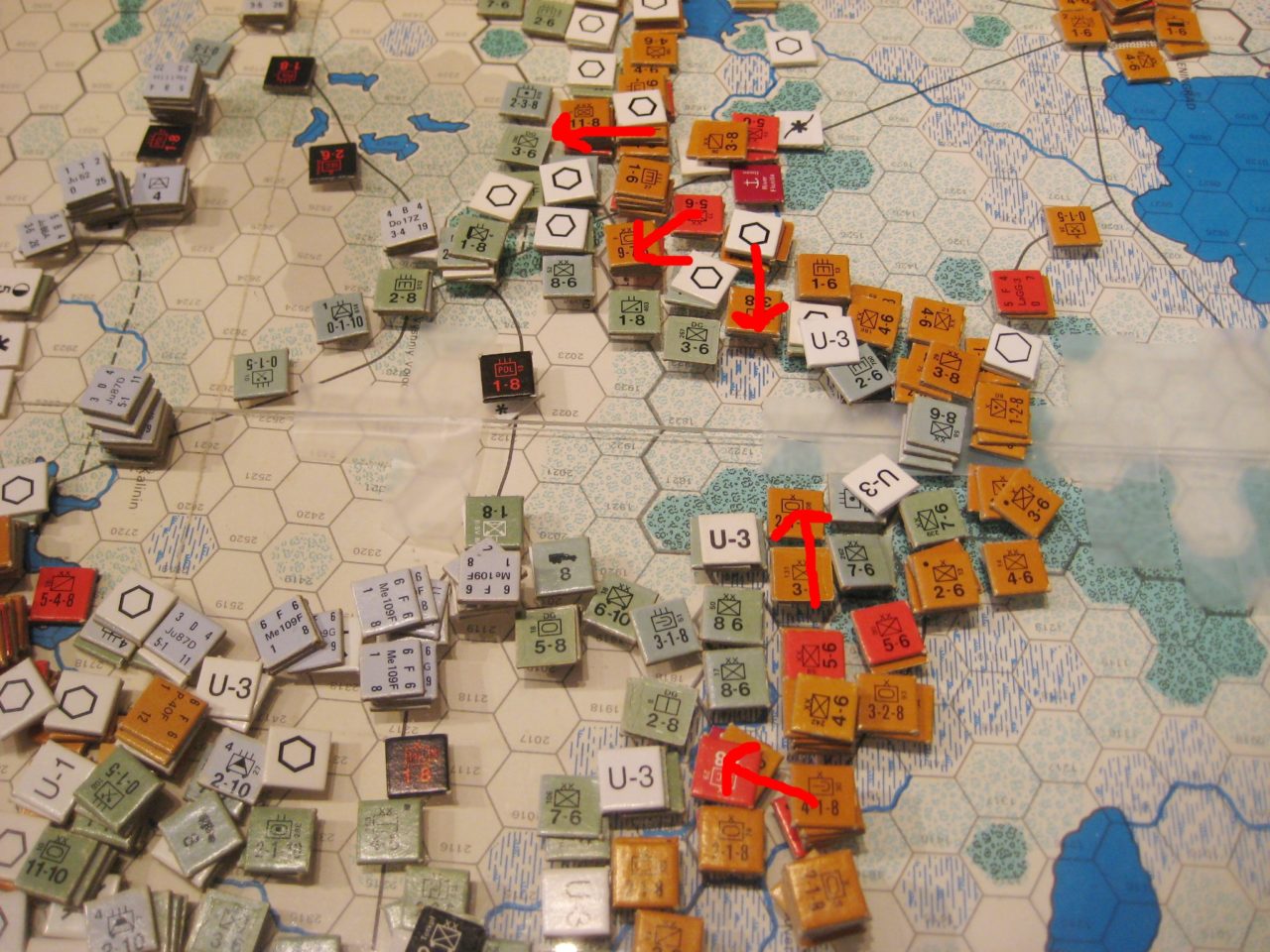 Moscow Front; The Moscow Front assumes a defensive posture with the exception of a thrust north from west of Yaroslavyl, which eliminates a mixed stack of German units and presses against their bridgehead East of the upper Volga

Soviet armour formations press into the eastern flank of the Don bridge-head cadering a 12-10 pz. A second attack fails against stiff Axis resistance desperate to hold open the escape route as the main body of troops prepare to withdraw north.

Air War: In the south Soviet short range formations are able to concentrate against GS targets due to tardy German airfield construction which has lagged behind the main front. Long range strikes attempt to achieve some rail hits but are ineffective.

In the north the Soviets send out their long range bomber force to attempt to isolate the point of attack in the region of Vyshniy Volchek and short range forces attempt to bottle up the main German forces to the east should they attempt to pull back. In support of this latter action all Soviet Moscow based fighters run suppression raids against German fighters based at Moscow targeting the long range twin engine formations.

All these northern operations are largely ineffective although the one hit achieved will hinder the expected German transfer of troops north from the Don bend. German fighters strip away fighter support with patrol attacks and interceptors risk by-passing the remaining Soviet fighter escorts to target the bombers.

In all these operations cost the Soviets 7 eliminations and 2 aborts, the Luftwaffe having only 2 aborts in return. 2 hits on rail lines are made. The only crumb of comfort for the Soviets is that one of these hits is west and one east of Vyshniy Volchek so do protect the flank of the main attack but a single hit can quickly be repaired so the effect will be minimal if any.