Finnish Front:  Resource points arrive at the neck of the Kola peninsular ready to push back West towards Salla against the mixed German/Finnish forces. However the Soviets decide to wait until all forces are in place to maximise the effect of the precious resource points so no attacks are made this turn.

In the south the drive north from Lake Ladoga continues eliminating two cadres and the Finish armour brigade.. A full strength division is eliminated in its entirety as its cadre is pushed back against the unfrozen lake and has nowhere to retreat. 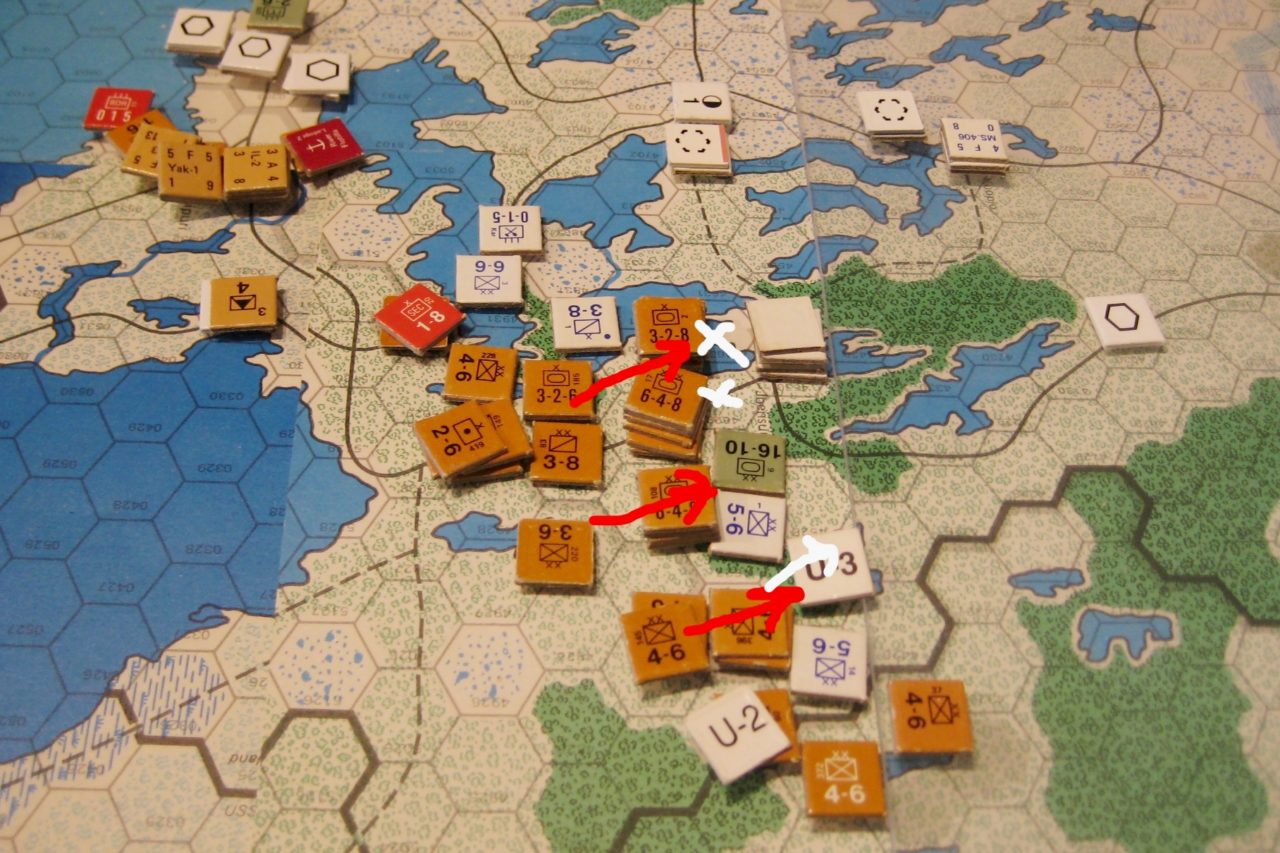 The destruction of the Finnish Army

Leningrad/North Moscow Front. A Soviet push West along the Vologda/Leningrad rail line removes the Germans from the rail hex they so recently captured (cadering a Panzer xx in the DH) and relieves the out of supply section of front. Still two hexes of the line remain firmly in German control approx. 100 miles further west. 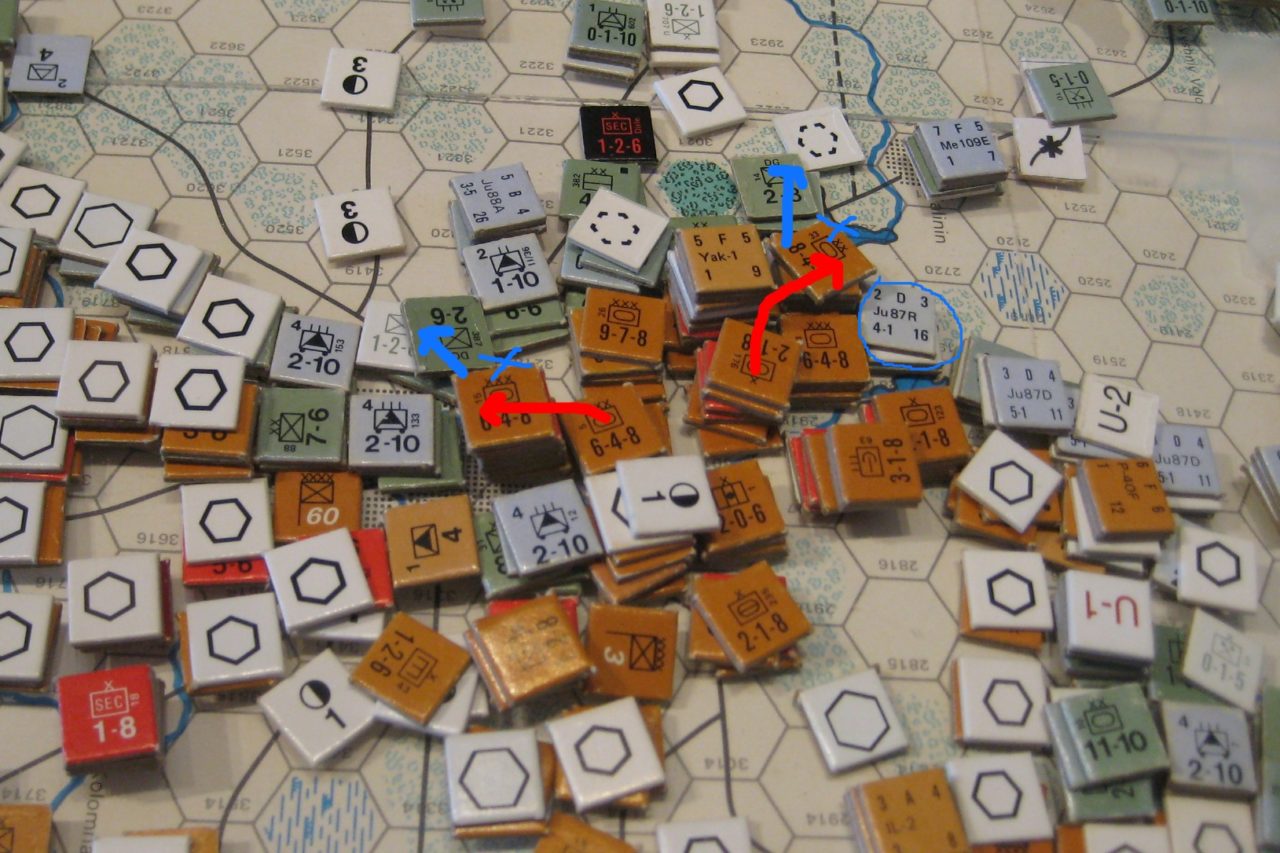 Army of Moscow: The new army group strikes simultaneously north and south as it comes up against stiff German defences to the west. The northern hook cadres an infantry xx and a mot xx and eliminates a construction unit and light flack battalion, captures an airfield and traps a further 7-6 inf xx against the lakes to the north.

The southern attack achieves an even more successful result as lead tank elements bolstered by Guards infantry and an impressive battery of Katyuskas drive into the NW suburbs of Moscow recapturing the hex after 10 months of occupation.

Rostov Front: Unimpressed by the single German pz holding onto a narrow 16 mile strip east of the Don near Stalingrad the soviets contain the unit with infantry and AT units and transfer all armour south. These units join others and drive into the eastern edge of the German bridgehead south of the Don driving it back 16 miles and eliminating two stacks of units with cadres fleeing back across the don and west. Meanwhile an NKVD regiment enters the southern defensive ring just one hex short of the city. It is hoped it can provide ideological resolve before the Axis can mount a major assault – It may be too late. 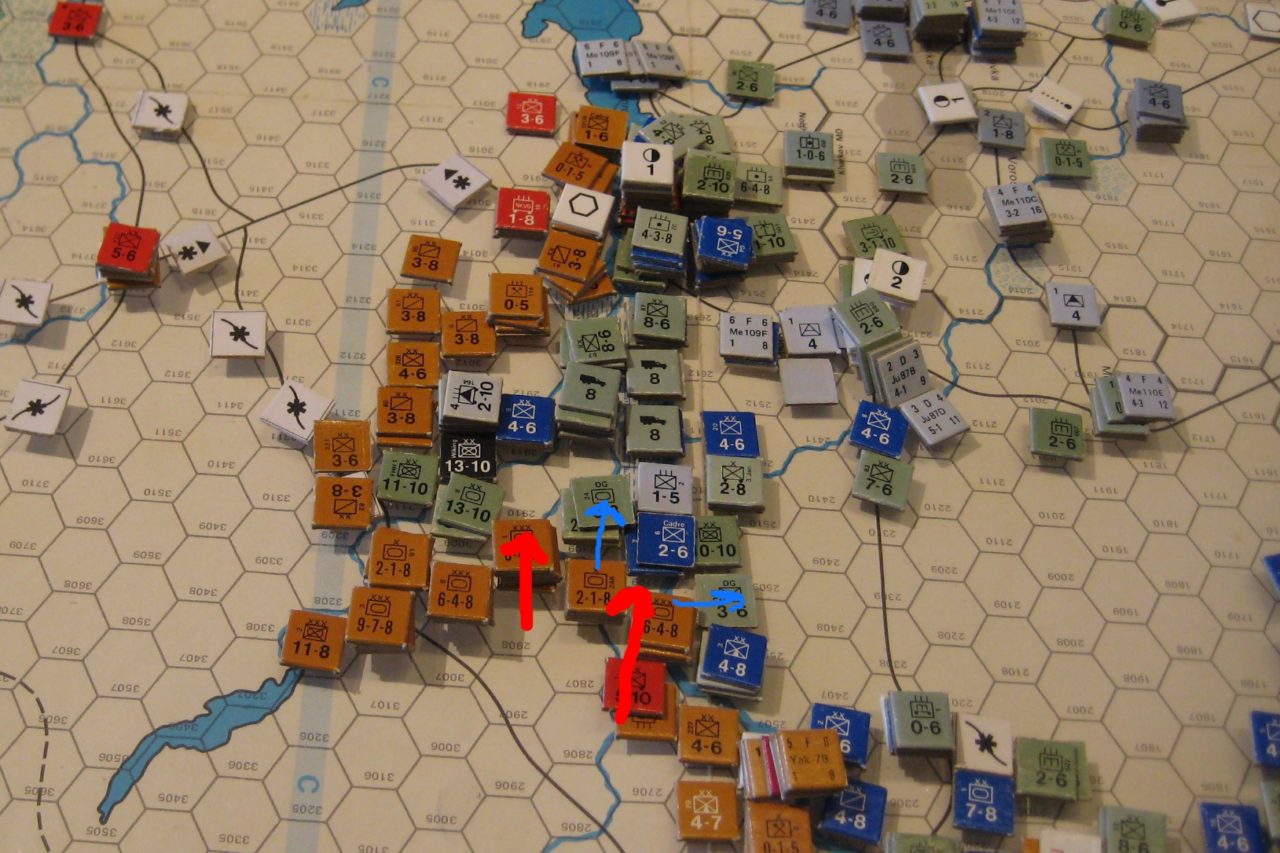 Air War: An airfield building program around Moscow starts to tip the balance of fighter air cover over this area. The northern attack goes in unmolested with GS raising the odds one level.

The southern Soviet attack into Moscow however is heavily contested by 8 German fighters (a mixed force of 109s and 110s) who attempt to bypass 7 Soviet fighters of Laggs, Miggs and Yaks

Of the 8 German units 1x ME109m is aborted, 1 Returned.. The 6 survivors attack the bomber stream inflicting 1 Kill, 2 Aborts and 2 Returns suffering no losses themselves thus only one of the engaged bombers gets through.

The Soviet bomber commitment however is more than sufficient even with these losses to raise the attack to the viable 4:1 (-1) needed and a HX captures the hex.