Finish Front: As Res Pts are not needed for fortifications in such vast quantities more are spared for offensive operations in the far north. A stock is building which should allow continuous offensive action going forward.  The Murmansk aspect is however still not threatened but the push continues west along the road to Allakurtti. The advance is blocked by a 6-8 mtn division so swings north eliminating the 271 FHH regiment.

In the south the rump of 9th pz is forced out its fortified position at Jonesuii retreating westwards. Soviet mech exploits north with the small lake protecting its flank. 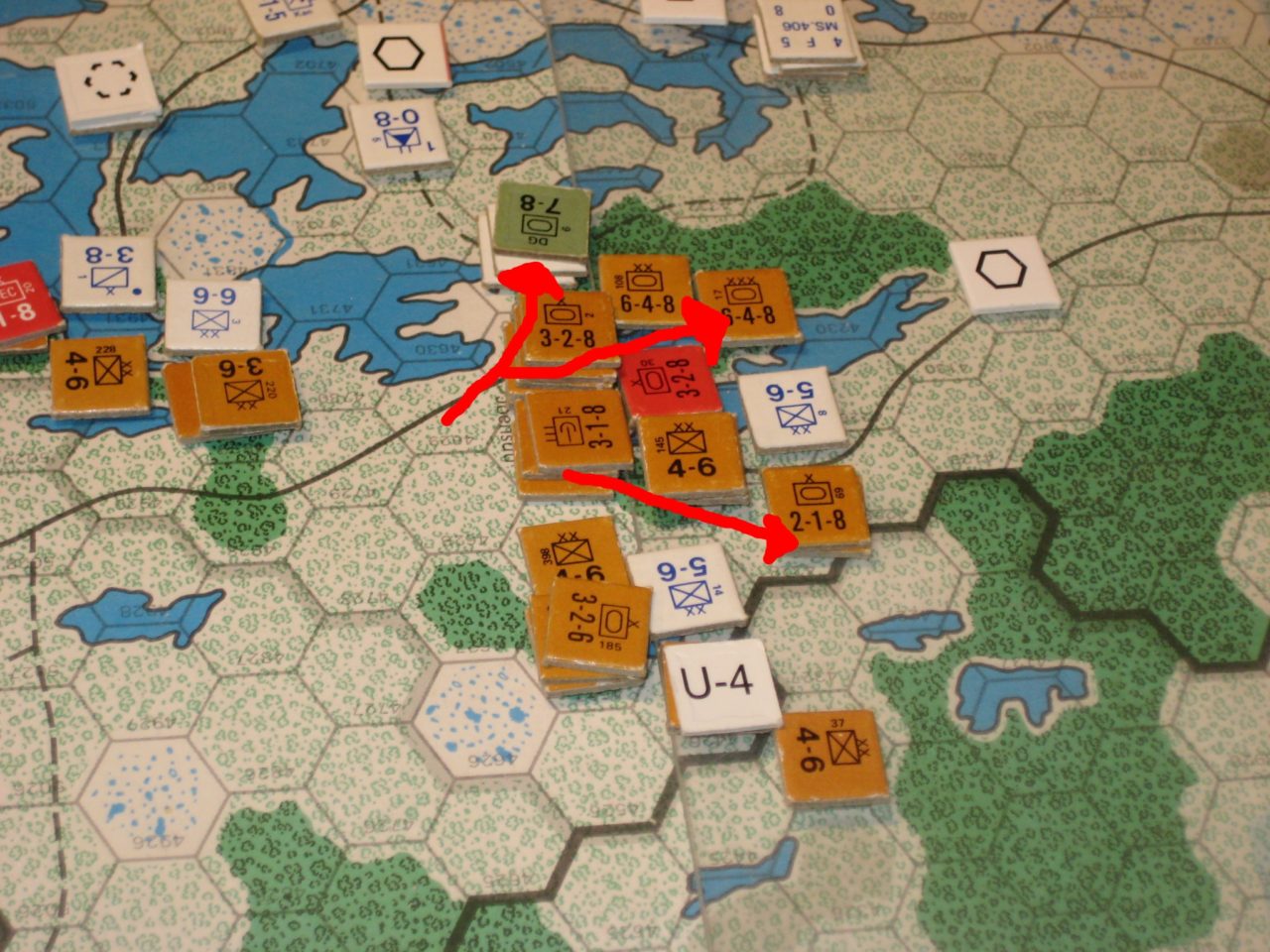 Leningrad Front: The main thrust south along the Leningrad/Kalinin axis continues with Soviet tank and mech corps breaking through to the east and west of the main German defence on the rail line. The Soviets are hampered by their poor mobility. The combination of terrain, ZOC costs and overrun requirements means that a single bicycle battalion can prevent an entire Mech corps from advancing in exploitation. The Soviet momentum is also retarded by German rail hits and the low Soviet engineer presence. (an omission which has cost at least one planning officer his head.)  Finally simple congestion on the road prevents some units moving forward in the exploitation phase. Accordingly while holes are made all advances are limited to single hexe.

The Soviets have now lost the element of surprise but still they have a far greater density of assets in the area than the Axis and with newly formed Artillery Divisions due to reach the front next turn they hope to be able to reduce the German roadblock and force their way south towards Kalinin.

To the west of the main attack the German forces have thinned the line and pulled back behind the river … to protect the rail line to Veliki Luki. Soviet troops take advantage of the reduced enemy presence and leaving dug outs they have occupied for almost a year surge south. They cannot hope to prevail against resistance but do hope to prevent the Germans from thinning the line further, dissuade any more sideways movement to re-enforce the rail to Kalinin and draw off units bound for the main attack zone.

Likewise to the East of the main drive the Soviets develop the attack SE and penetrate the German line to as the Germans collapse back to re-establish supply to their northernmost units. 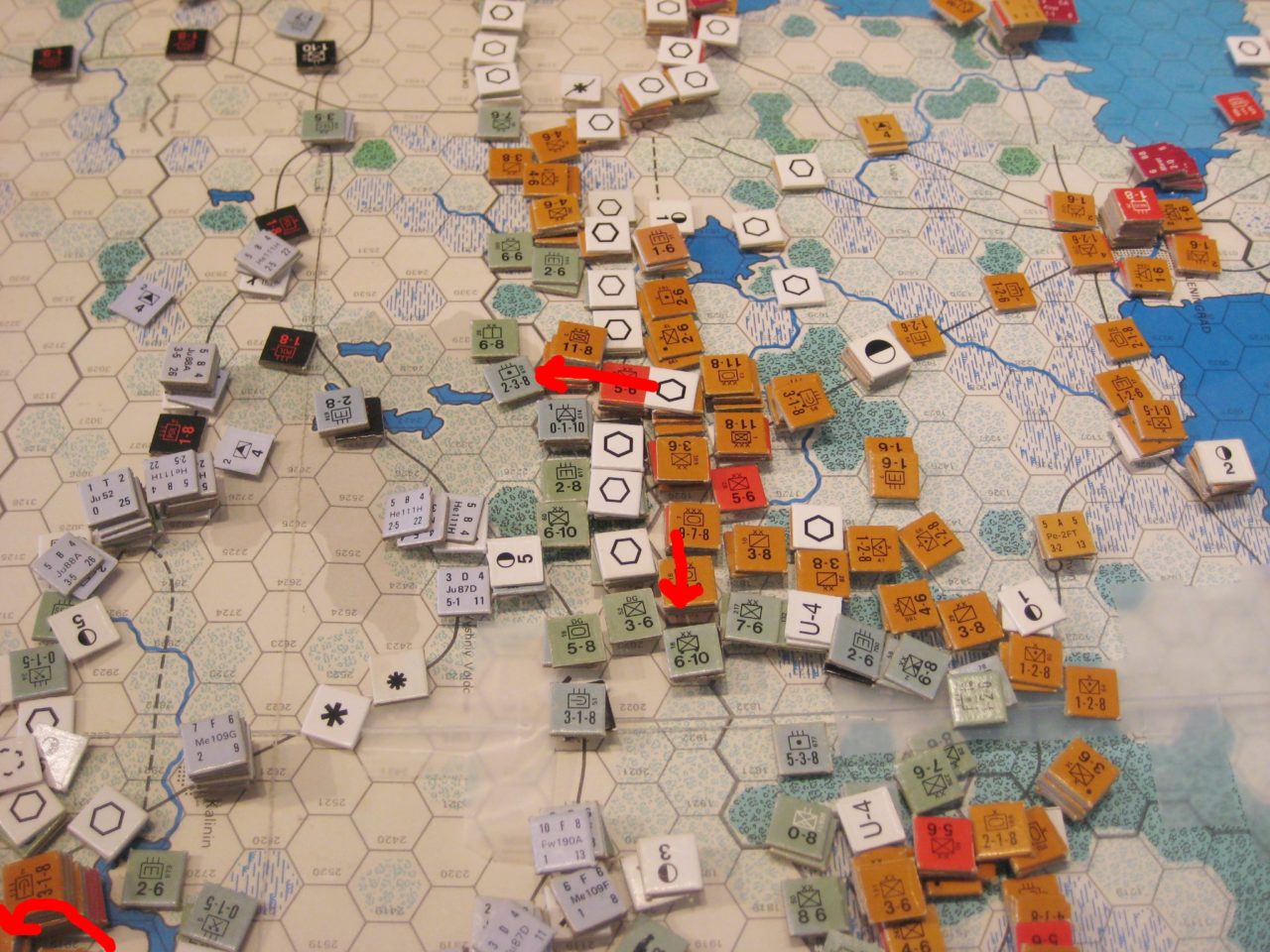 Moscow Front: Soviet units south of the German main shwerpunkt continue to drive north into the flank of the invaders and capture a hex of the rail line supplying the front with the defenders falling back in disarray. This threatens the main German supply line and with the companion thrust driving south also making progress and only 50 miles separating the two thrusts even Hitler now must realise that Meatgrinder has ground its last lump of gristle.

West of the upper Volga two attacks are made. That west against the 19th pz fails as the unit fends of repeated tank/katyushka assaults but just 30 miles south the 25th pz loses over half its tanks in a bitter HX and retreats SW exposing further the German’s hold on Moscow.

Voronezh Front : Engineers work tirelessly clearing the rails for units transferring  North but reduced winter mobility means some breaks are out of reach and major assets are held up just north of Stalingrad..

Stalingrad Front. While the best Soviet mobile assets entrain for the north those remaining continue to pressure the Axis forces south of the Don mounting a single concentrated attack and eliminating another stack of units. 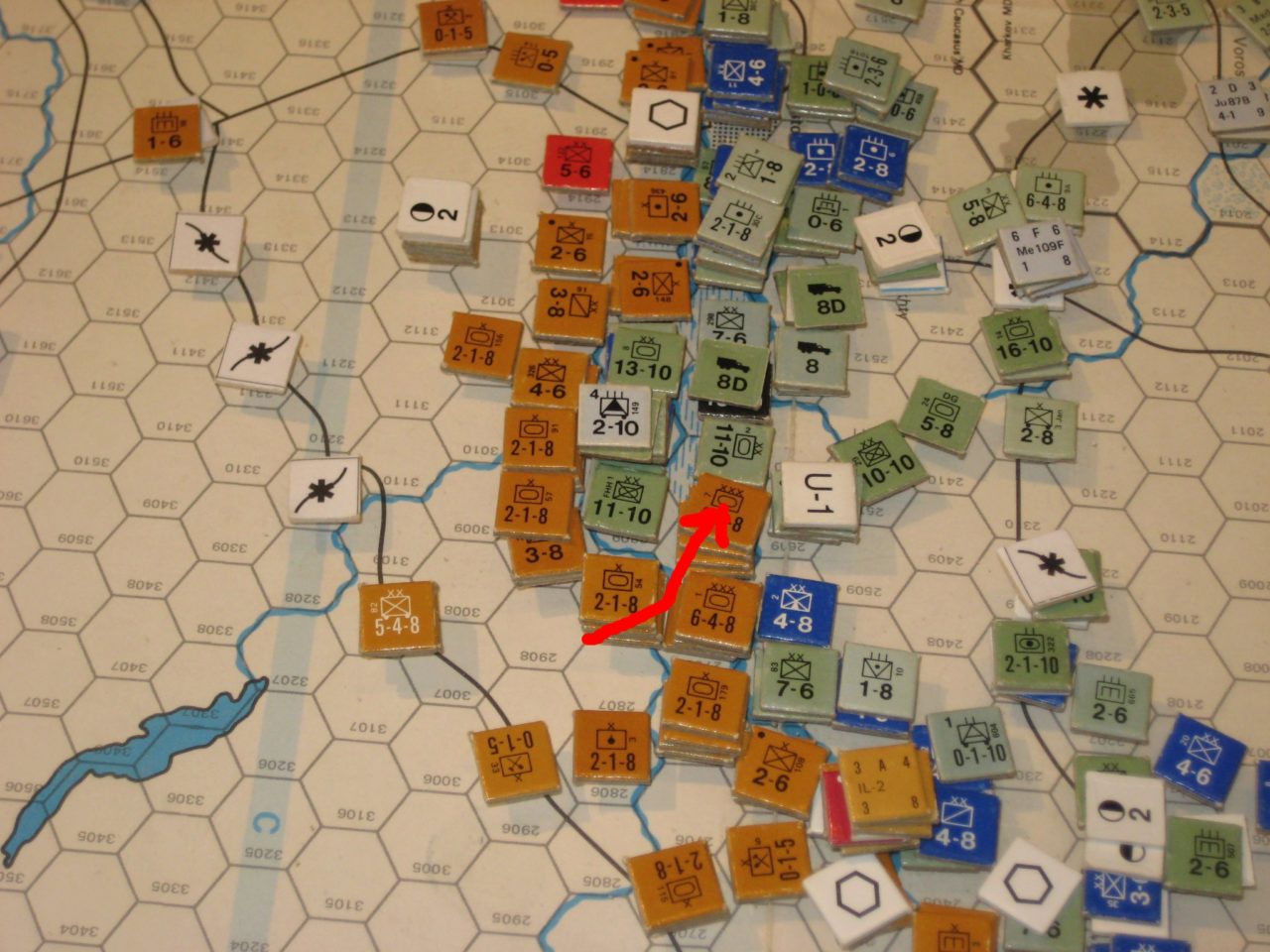 Soviet attack south of the Don

Air War: The soviets step up their activity in the Moscow area supporting ground attacks and raiding German twin engine fighter bases.  In the ensuing fighter–on-fighter battles the Soviets cannot hope to achieve parity of losses but they are pleased with the overall tally. (Germans suffer Ex5, Ax3. Soviets Ex7 Ax6). Then two deep raiders are caught by an unexpected concentration of enemy fighters and fail to return. Their 6 comrades further east raid the Veliki Luki line unopposed inflicting a single hit.