“Take the baby! Please! Take my little ditya!” the mother screams to the naval orderly. Reluctantly he agrees. “Ok! Quickly!”  Just then a shell lands close by sending a spray of water over sailor, mother, baby and the large rowboat already overladen with waiting, screaming and weeping  civilians and military alike. “Leave it”! Shouts one “We can’t wait, let’s get going all we’ll all die!“. “Thr ow him to me!” shouts the sailor as the boat starts to move off.

Out of sheer desperation the mother flings the wriggling, wailing bundle the last few feet as the boat is pushed off from its moorings. More shells land one just missing the boat which rocks and takes on some water. Furiously many hands start bailing and the lumbering boat inchers away from the wharf and slowly moves to the waiting destroyer in the bay. The mother turns, her job done, and runs for the cover of a nearby shop front long denuded of glass or produce. As she does so a cry goes up from the others crowding on the embankment. The Rumanians are coming! Run!!. Some jump, fall or are pushed into the rough seas of the bay and some hide behind what cover they can find but most flee inwards towards the mother’s hiding place and others like it. Seconds later solders burst from a side street shooting at the few remaining naval troops along the embankment. They return fire. Anyone, military or civilian, unlucky enough to be still standing in the open is cut down in the exchange. More shells explode in and around the wharf. From the relative safety of the shop front the mother sees the boat containing its precious cargo reach the larger ship which is already at full steam ready to depart. Just then a screech from above heralds the arrival of enemy aircraft and bombs fall adding to the carnage. Thankfully most drop wide of their mark and the destroyer is untouched. The last image burned into the mother’s eyes is that of a small bundle being thrown to waiting arms aboard the big ship and it turning out to sea. She drops her head and mutters a secret prayer for the safety of her little one.

Finish Front: In the centre the impudent German Ski unit which caused the loss of the rail gun has the favour returned.

In the south the failure of the Finish attack is taken as a reprieve and defences strengthened. 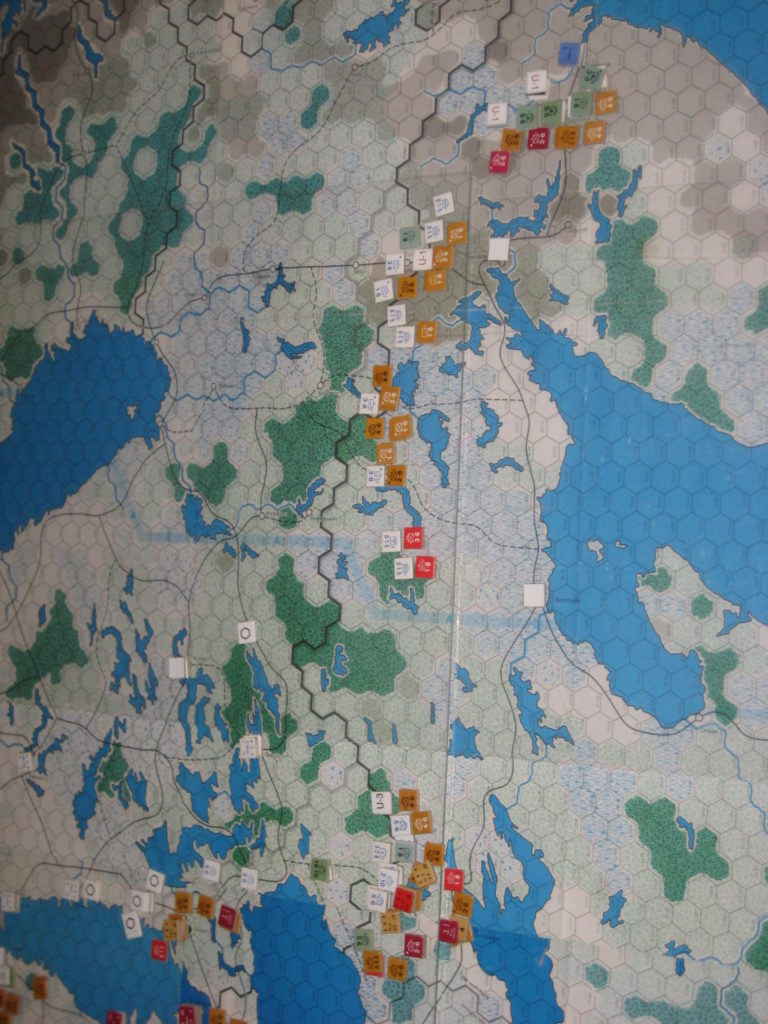 ’42 May II: Frontlines in the Arctic before the Axis summer offensive

Leningrad Front: The attempt to liberate the spearhead is abandoned and troops fall back to the pre-winter fort line.  The spearhead forces themselves however are not content to go without a fight and attack a second line infantry division but can only retreat the defender.

The assault out of Narva continues towards Tallinn against a security division which the Germans had thrown into the line but air cover out of Riga allows this unit to retreat without loss.

North of the Valdai there are signs that the rout is slowing as fresh troops move into the area solidifying the defences. 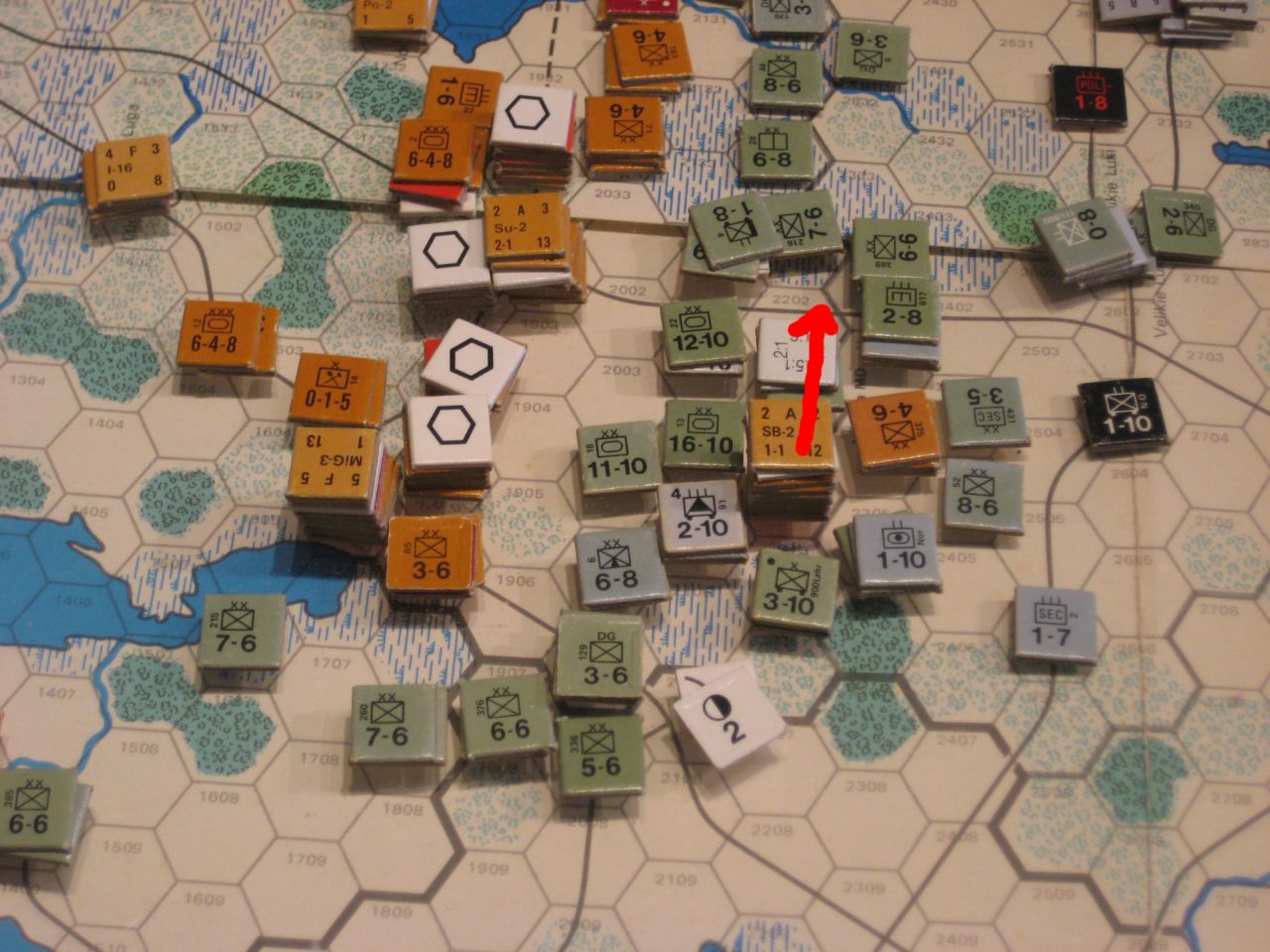 Moscow Front:  The German bridgehead is contained but no attempt is made to counter attack it.  The west bank of the upper Volga begins to be evacuated.

Voronezh Front: Most of the 1st Shock Army is now back to the fortified line. Some stragglers remain and are given DAS to cover their retreat but hopes for their survival are low.

Rostov Front (AKA Crimea & Odessa).  With the fall of Odessa the Black Sea fleet and remaining air transports are withdrawn. The ground troops on this front continue to prepare their defence and await the Axis next move with bated breath. 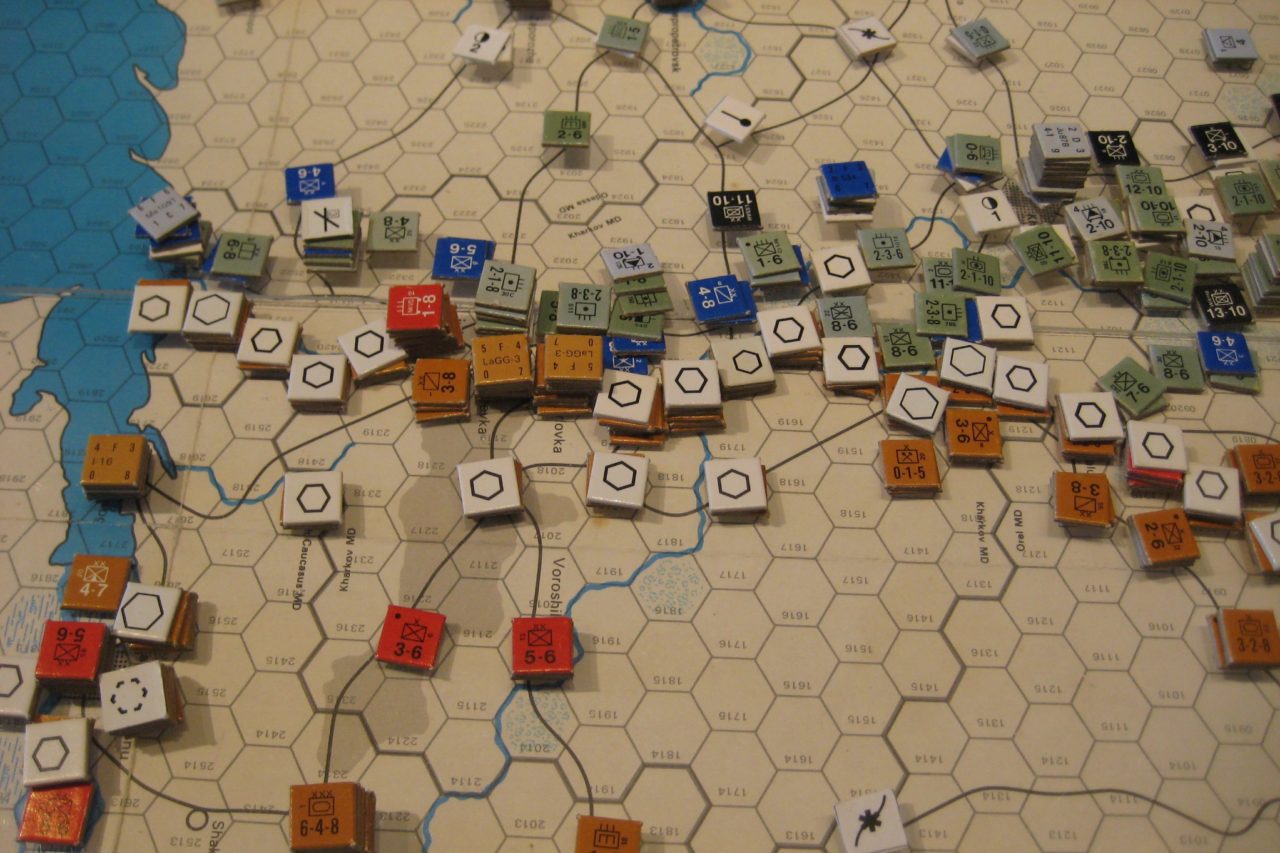 Partisans: Get a special mention this turn for a series of raids across the occupied territories resulting in  a total of 5 rail breaks.

Air War: A few raids are made to disrupt Axis rail connections around their jump off points but most success is made in Estonia, breaking the rail line to Tallinn in two places to hinder any Axis counter strike against the Narva operation.