Gregor raced towards the hedge line, his breathing heavy with exertion and his feet heavy with the cloying mud which seemed to pervade the whole landscape. He heard the whine of bullets pass his ear and instinctively dodged sideways.  His blue tunic was brown from the waist down, a sorry sight and not as it should be. He was part of a marine regiment and had spent the first part of the war in his home town of Leningrad. He was born there although in those days it was called St Petersburg. He had survived the revolution and the purges and the first few months of the war spent on board ship.  His father had been a stoker for the Imperial fleet so it was natural that he and his twin brother Prokhor would join up as soon as they were of age. Prokhor had been sent north to the Artic squadron and seemed to have got the better part of it but Gregor had heard nothing from him now for 3 months and the news from Murmansk was not good. He hoped his brother had somehow found safety but each day without news increased his fear that this might not be so.

For his own part after the fleet was bottled up in Kronshtadt a call had gone out for volunteers for a territorial unit so he had joined up for some of the action and now found himself in the thick of things. Last time he has passed this way he had been moving south over clean crisp snow and they had swept the fascist invaders from their path. But shortly afterwards things started to go awry and now they were fighting for their very existence.

His blood pounding in his ears as loud as the artillery shells pounding the earth ahead he raced towards the enemy position. A figure in dark green/grey appeared before him. Gregor squeezed the trigger and let out a burst from his sub machine gun which spluttered to empty after a dozen rounds. Luckily it was enough as the enemy fell backward. He burst through the hedge and into the ditch behind. Sensing rather than seeing a figure to his right he swung his now empty weapon around, butt extended. Catching the enemy combatant off guard the butt contacted hard against steel and flesh. The “coal scuttle” arched into the air as the adversary fell backwards with a groan. Gregor pinned him with his boot and grabbing the enemy’s machine pistol. He pulled it upwards; the force of his action dislocating the enemy’s shoulder as the strap was freed from its hapless former owner. Fumbling with the unfamiliar mechanism he swung right and sprayed the third occupant of the ditch. This fellow had been so intent in defending against Gregor’s comrades racing towards him that the savage scene to his right had gone unnoticed and he offered no resistance.

Not stopping, fuelled by desperation and adrenalin Gregor sprung out of the ditch and pressed onwards towards the next ridge line. A group of soldiers were racing towards him. He raised his newly acquired machine-pistol and aimed to fire a burst at the oncoming figures “Nyet comrade, Nyet!! – -they were Russians!!. He crumpled before then the sudden relief draining his ability and will to go further. He was saved, he was safe – for now at least…..

(Note: The stories normally provide a narrative to support a game event such as the Soviet spearhead breaking back to Soviet lines south of Leningrad,. In this case I wrote the story before the die roll and the Soviets rolled a 1! (4:1 attack) and thus failed to achieve the breakout. So a bit of artistic licence here. Let us just suppose Gregor’s unit found a weak spot in the German lines and slipped through before the ring was fully sealed) 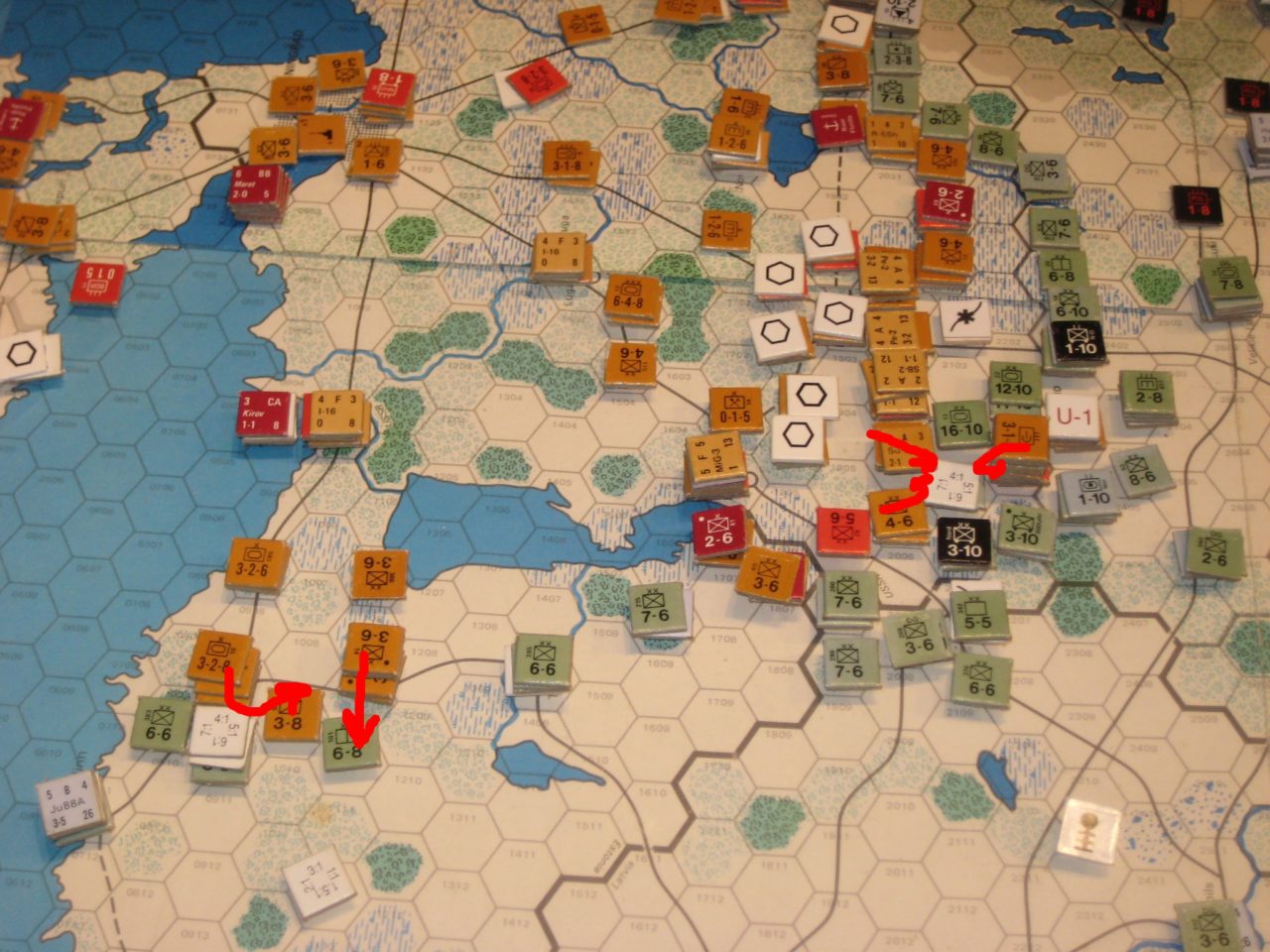 MAY I ’42: Failed breakout of encircled Soviet troops in the North

Finish Front: At Murmansk the inadequate Soviet forces can only hold their ground in front of the wall of now fully supplied German mountain divisions. In the centre however the attacks are pressed forward eliminating a Finish regiment and the advance reaches the pre-invasion border.

Around the southern lakes the Soviets consider their options but decide to take a defensive stance aided by air support from Leningrad.

Leningrad Front: The Soviet advance West from Narva continues attempting to draw off troops from the south as much as for any territorial advantage. The attacks cadre a German light division.

South of Leningrad the desperate isolated spearhead attempts a breakout, aided both by troops fleeing from the west and by new arrivals. The attack stalls against the German infantry division which holds firm.

The breach north of Kalinin now stretching to the Valdai continues to be a widening sore as troops rush south from Leningrad and others pull back to try and seal the breach.

Moscow Front: The troops west of the upper Volga cling onto the West bank while reinforcement and fortification of the East bank continues. Fresh troops are railed north of the German advance to occupy the region’s swamps and forests.

May I 42: Sourthern Front reinforces its defensive lines

Voronezh Front: The main Soviet attack force struggles to disengage. Harried by Axis patrols and probing attacks they can only withdraw at the speed of their lumbering artillery and rocket units; no more than one hex in most cases. This hinders the more mobile motorized units which are tasked to cover the retreat of their slower comrades.

Rostov Front (AKA Crimea & Odessa) A secondary line comprised of individual forts and mech stacks built around the newly formed tank corps take up position to the east of the fortified MLR providing depth to the defence,

The loss of the isthmus fort west of Kerch leaves the defenders no choice but to retreat. Those which can move to the safety of the east bank of the straights. A lone infantry brigade stays as a rear guard in the city.

Air War. Much airpower is devoted to DAS this turn. Long range bombers carry out a number of deep raids into the Axis rear with no effect. Unfortunately the retreat from Kerch exposes an aborted Transport aircraft left in the city. As a result of steady losses to the transport fleet the VVS decides to remove them from harm leaving Odessa to be supplied by the Black Sea Fleet once again.