The game has reached a critical phase where the Soviets have now committed 95% of their armoured reserves with a view to stopping or indeed eliminating the Axis mobile formations and restoring their fortified line which they can then use to launch their own attack in due course.

In Finland they plan a bold counter attack to remove the threat from the Leningrad/Murmansk rail line.

On the main front in the North they are forced onto the defensive and against military good practice but arising out of military necessity they are forced to commit their reserves to passively hold the line and only mount one attack – against the bridgehead over the Volga River south of the Leningrad/Vologda rail line. The penetration to the north of the rails due to terrain and Soviet dispositions is unable to be engaged and the double stacked Panzers pushing NE from Moscow are too strong to touch on the narrow frontage. Soviet reserves therefore mount the one attack in the south and move to blocking positions encircling the attackers and restricting their ability to mass and manoeuvre – but will this be enough?

It is a completely different storey in the south where the panzers are deployed in open terrain with 3 points of penetration of an extended fort line. Covering half the frontage with cavalry/AT stacks and massing elsewhere the Soviets line up 5 attacks on infantry, panzer, mech divisions and the Hungarian 1st armour. Complete success will isolate the Axis speared and fragment it into 4 segments. Complete failure will leave the panzers intact and the Soviets exposed to devastating counter attack – both sides hold their breath as the die is, quite literally, cast.

Finish Front: The sporadic attacks in the centre continue and claim a Finnish 1-6* regiment.

In order to ease pressure off the main Leningrad/Murmansk line the soviets launch a scratch attack directly north from Leningrad across the old Mannerheim line. Troops stationed there who have seen no action since hostilities began move to attack the equally quiescent Finnish defenders catching them completely by surprise. The attackers are bolstered by some replacement divisions from the city and one of the reserve mech Corp moved from its defensive position south of the city. (The second reserve corps moves to Leningrad central where it can move south on the rail radials to any threatened point should the Axis try a surprise attack themselves.)  Two Finnish divisions are attacked. One is cadred and pinned against the lakes to the north. The other, surrounded is eliminated. Exploiting mech units reach the rail junction at point 4602 splitting open the entire Finish front. In support of this offensive the tank corps pushing north along the shores of Lake Ladoga renews its efforts and cadres a third division. As the Finish commander of the tank regiment feared when 9th Pz withdrew his unit is also swamped by the Soviet attackers and is forced backwards but with no path open surrenders. 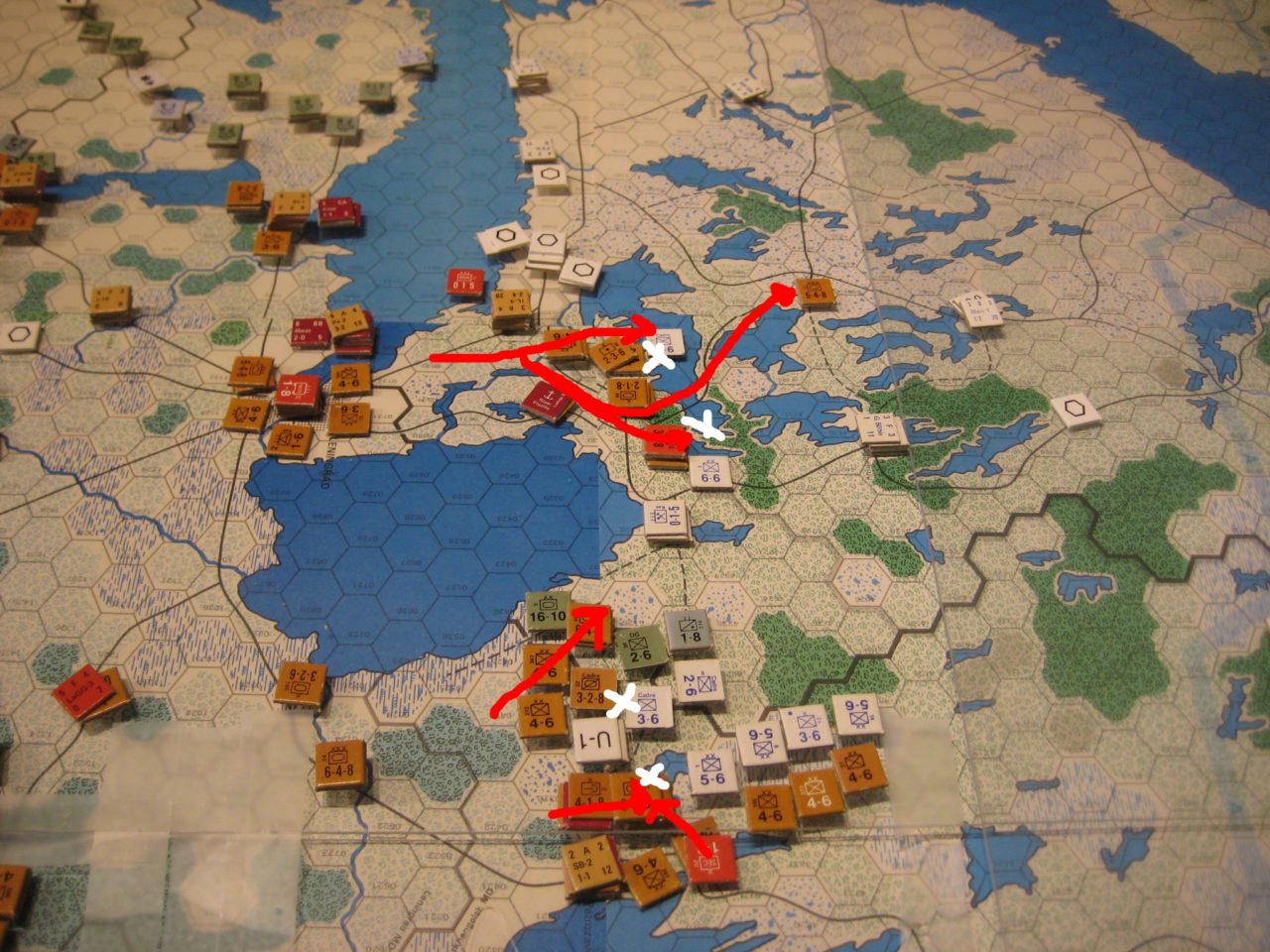 Leningrad Front: All units less those sent north to attack the Finns are fed into the defence of the Leningrad/Valodga rail line but can only move as far as the German block 80km east of Tikhivin where the easternmost infiltrates East around the panzers.

Moscow Front: The Soviets look at their options and reluctantly conclude that the German armour is just too strong to attack directly. They therefore launch a single attack against the infantry bridgehead over the river and retake the hex cadering an 8-6 infantry xx and sealing the southern breach. However they are out of position and cannot do the same north of the rail line. The tank corps therefore move into the line clamping the panzers tight to the back of the surrounded units (who will be supplied next check). The VVS provides copious amounts of DAS in the hope that the air cover will be sufficient to preserve their armour from German attack in turn. They do manage to strengthen the breach immediately NE of Moscow with some infantry/AT combinations and move engineers into position to rebuild the fort line. As per doctrine they maintain the former front line forts which now penetrate into the German lines like a hooked finger. 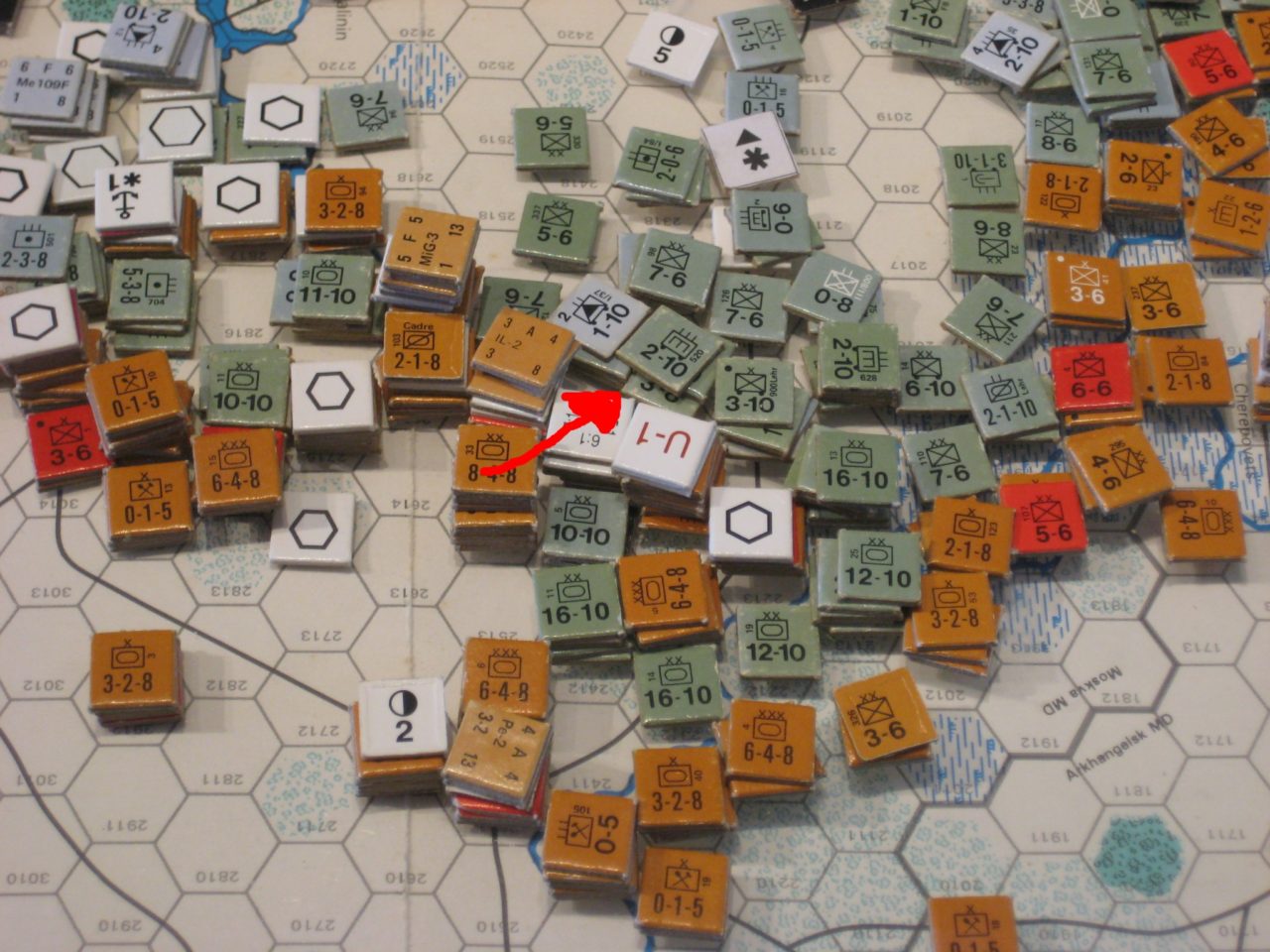 Voronezh Front: This front sees no action but the pitifully thin reserves are thinned further in response to the German breakthrough in the north.

Rostov Front:  The counter-attack is executed. Tank corps move into attack positions and execute a total of 5 attacks up and down the line of German exploiting units. Where the attacks are not made Cavalry/AT combos move from behind the river Don and form a new line tight against the panzers ring

The attacks do cause damage to the invaders cadering a 7-6 infantry division, an 11-10 panzer, and completely eliminating the Hungarian tank division. (Together with a number of support units).

In particular the southern breach of the fort line is resealed eliminating a 6-8 light division and its support.

Unfortunately the attack against an SS Mech corps aimed to isolate a German truck unit fails and although the entire Axis line is pocketed the truck unit can supply all but the southernmost three panzers.

In the Exploitation phase the Soviets use minimal infiltration to isolate the Axis line and re-supply the forts and bypassed infantry stacks. Attacking stacks redeploy to a defensive posture under cover of DAS and await the German riposte. 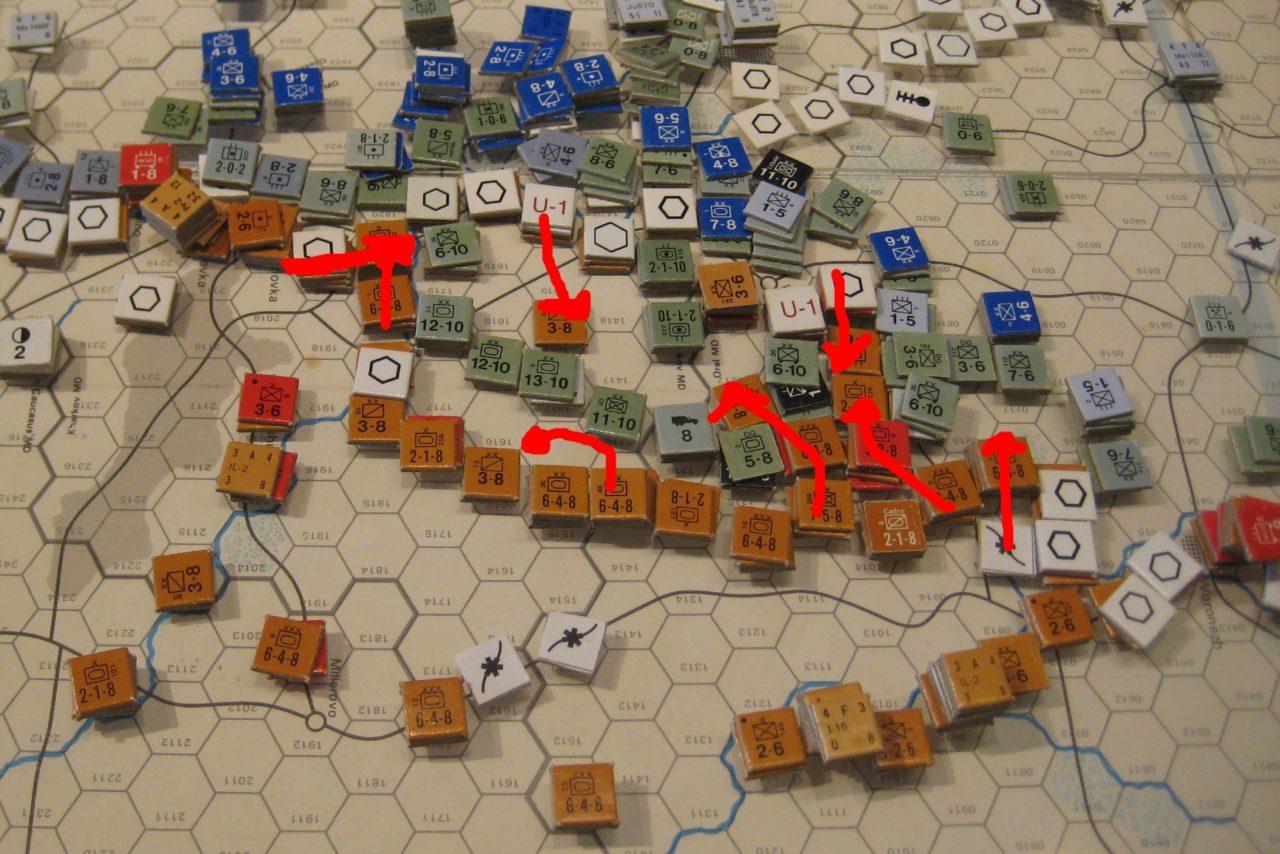