Weather: Clear across all weather zones.

As the Axis Summer 1942 offensive is launched the normal commentary will be suspended in lieu of a detailed description of the opening moves across all fronts which is likely to set the pace and form for the upcoming campaigning season.

Finland & Army of Norway. At Murmansk the Germans have 4 mountain divisions forming a line 2 hexes south of Murmansk and extending SW. They are supported by a few ski battalions, the ski rocket battalion and two supported regiments. Nord is present and was to be withdrawn to Norway for upgrade to the 7-8 mtn XX but has been put back in the line to achieve breakthrough odds for this turn’s attack south which with Luftwaffe support from 3x HE11Hs provides sufficient GSs for a 7:2 (-1) attack eliminating a Soviet Naval regiment and pushing another hex south down the main rail line. (Due to last turn’s transport of a Panzer division to south Finland only 5 REs of supply are available at Murmansk limiting attack strength. With less capacity used to transport the mountain division this turn 10 REs of Supply are delivered to Murmansk for use next Initial phase.)

In the centre a reinforcement 6-8 mountain division is shipped from German off map ports and lands at Kemi and moves by rail over the recently rebuilt line via Salla to the front. It joins a Finish 3-6* regiment and 1-8 ski battalion and expends the Res pt shipped with it to eliminate a defending 2-6* inf Regiment/1-8 ski battalion. The Finish 3-6* is lost in the 4:1 (-2) exchange.

North of Lake Ladoga the 9th Pz XX (16-10) joins the Finish armour regiment, artillery, infantry and GS to attack a stack of a 4-6 xx with 3-2-8 tank regiment at 4:1 AA fire against the two DAS  Il4s is ineffective.

AGN: South of Leningrad The Axis forces resist the temptation to pursue the retreating Soviets which in any event have reached the safety of their pre winter offensive fortified line. Instead the panzers and motorized units elect to eliminate the now isolated U2 spearhead left over from the Soviet Winter Offensive. The two Soviet stacks are organized to give the larger maximum defensive capability which halved still amounts to a total of 12.5 points. The smaller stack totalling 2.5 after halving is overrun by the German motorized attackers. Infantry and support units form a defensive line offset south from the Soviets by two-three hexes taking advantage of the flanking forests and swamps. Learning the lessons from last winter all open hexes are to be fortified. Gaps in the infantry wall and attacking main motorised stack are filled with support troops so that the cadres of the two surrounded Guards Infantry and Cavalry cannot retreat ensuring the elimination of the stack automatically at 3:1(+3). In the exploitation phase all the motorized elements begin the move to their jump-off points NW of Kalinin.

The Soviet thrust to Tallinn cannot be ignored and infantry peel off from the Western flanks around Pskov and move north to engage the Soviet 2 division screen just north of the river at Tartu. The deep penetration of the Soviets offers too tempting a target and the possibility of trapping a number of divisions and tank regiments is such that a newly arriving Panzer and Mech Inf division are diverted north. They are forced to de-train 100 miles south of Tartu due to Soviet rail bombing preventing them engaging this turn. The infantry attacks a 3-6xx defender at 5:1 and eliminates it advancing past a defending 4-6 winterized xx which is surrounded by the mobile units in the exploitation phase.

North of the Valdai Soviet defenders including guards infantry divisions moving SE from Leningrad are too strong for the German s to engage so infantry with some artillery support and the lone 6-10 motorized xx which has been attached to this corps since the start of autumn probe northeast.  Attacks against two weaker stacks result in a DR and NE gaining a modest single hex advance.

The attacks are executed with a view to minimising losses, for while it is accepted that losses will be needed to breach the main line the army is still a long way off recovering from the winter losses and needs to conserve units for the main assault. 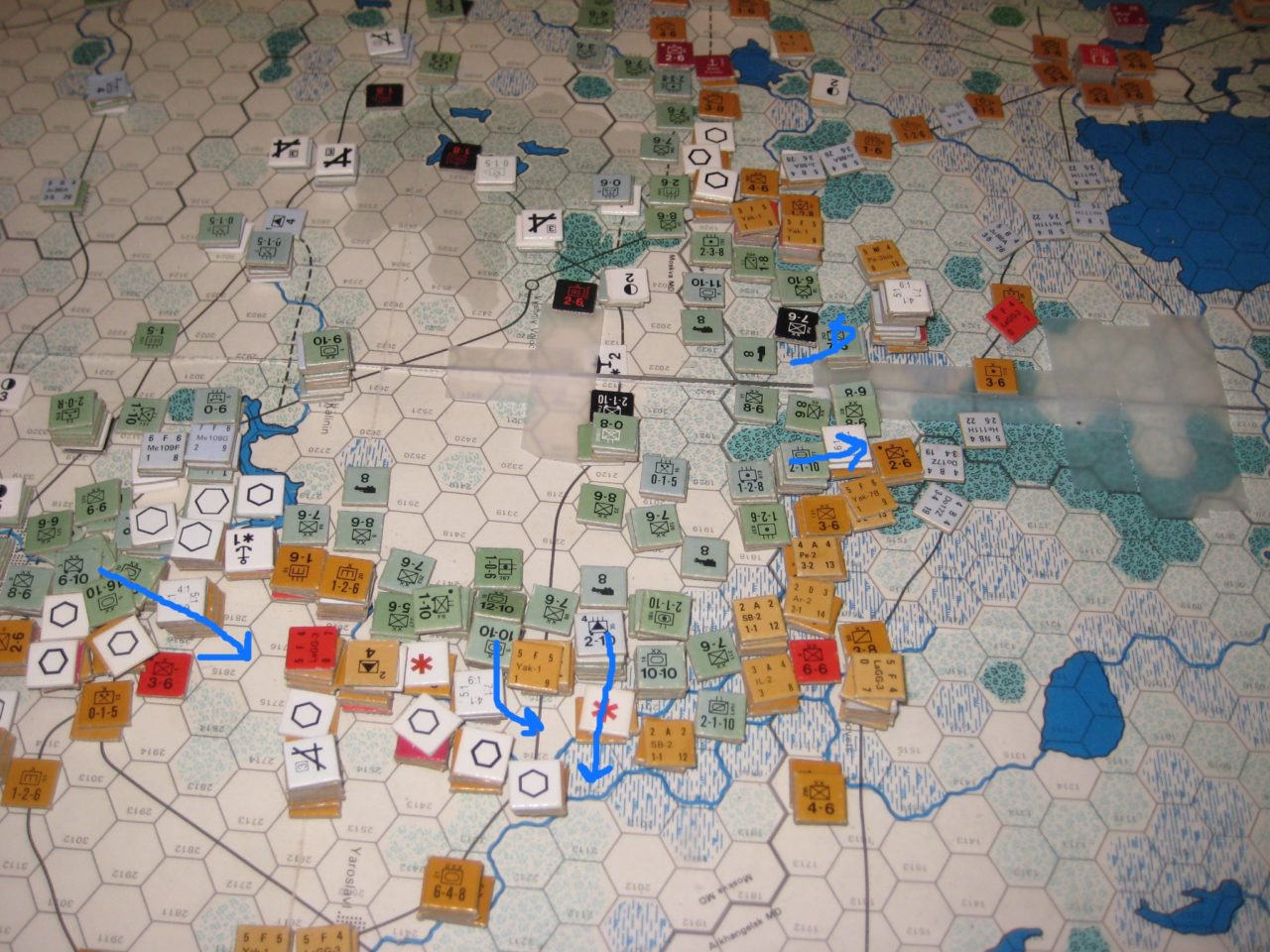 In a classic pincer assault a 4-6xx/1-2-8 AT stack suffers a DR with the AT unit being pursued to the river by advancing armour and infantry.. North of the by passed stack a second attack guarantees an advance at 7:1 which eliminates the opposition. A 4-6xx south of the breach is surrounded as a result and succumbs to a guaranteed elimination. In the exploitation phase armour advances sweep along the river bank behind the enemy force securing their isolation and eventual destruction. The hole created north of the island of resistance exposes a weakness in the soviet defence as exploiting armour crosses the swampy river system eastwards. Further north still a 6-10 motorised unit is ordered to halt its advance west of the river for fear of a counter attack from strong Soviet forces operating in the area to the north,

NE of Moscow: The armoured stack forming the bridgehead over the Volga canal attacks the displaced units from the fortified line and obtains a DH. The surviving defenders retreat but a lone 3-8 Cav xx is overrun in the exploitation phase. German forces limit themselves to a single hex advance for fear of overextending the advance before the main assault over the river is made. (This premature assault may prove unwise as it has alerted the Soviets to the threat and because no advance is yet made over the canal the defending fort line may be evacuated before the trap can be closed.)

AGC: At the northern end of this sector the Germans pull back behind the short river NW of Tula and form a “Hedgehog” line of alternating infantry divisions east of Orel down to Kursk. Engineers are moved into place with a view to fortifying this sector where no assaults are planned. Rail road engineers will be tasked to complete a cross rail system here to tie up the various rail heads and facilitate rapid north/south troop transfers, if needed, next winter.

In the southern sector an infantry assault surrounds and eliminates a stack of stragglers from the 1st Shock Army.  They are then ordered to solidify the line and take and defend the important rail junction at point 0318.

AGS: The secondary diversionary assault “Operation Fishhook” springs into action. The initial breakthrough is conceived as two mixed armoured/infantry assaults with more armour as a second echelon. The aim is to disrupt the fort line in two double hex assaults 30 miles apart and encircle the defending enemy troops occupying the fort line and secondary line between the breakthrough points widening the breach to 6 hexes. The fortunes of war are such that a retreating stack from the Soviet 1st Shock positions itself in front of the planned assault hex diverting some assets to ensure its elimination and forcing the northern attack south by one hex. The northern prong nevertheless attacks on a two hex front both at 4:1 (-1). One attack eliminates the defenders the other obtains a DH. 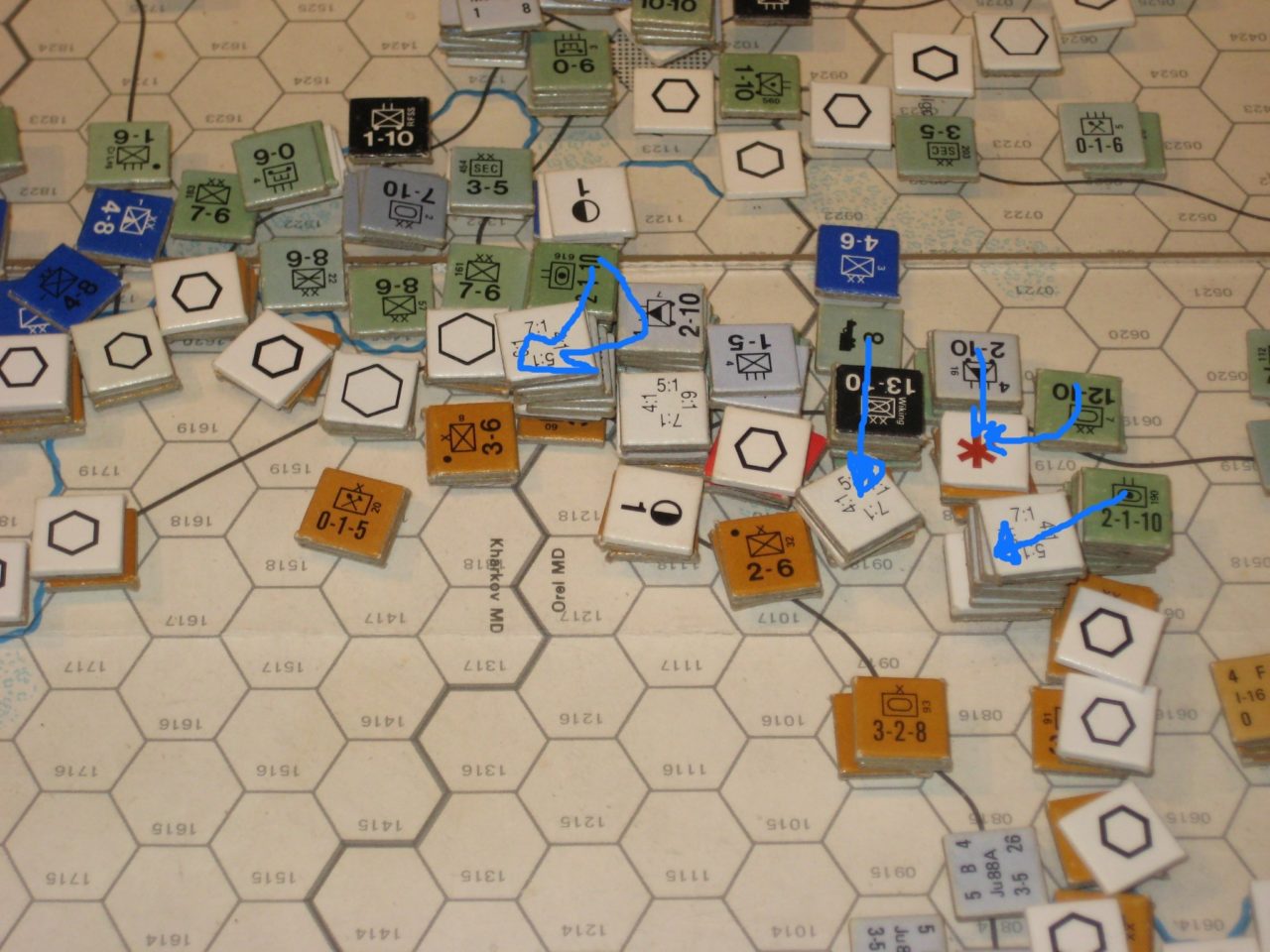 JUN I 42: Operation Fishhook kicks off

Panzers and motorised divisions with support overrun the survivors in the exploitation phase plus a second formation caught at part mobilisation behind the lines (2-6* inf and 2-1-8 tk X). The attackers form a small fan of units hooking south.

The southern prong meets heavy resistance but after a week of intense assault manages to winkle the defenders out of the fortified defensive lines and enters the reference city of Valuylki. Defenders however retreat in good order and form up alongside second line units in an overrun proof wall preventing any exploitation.

Aiming to replicate the success in delaying the retreat of 1st Shock the front line south to the sea moves adjacent to the Soviet fortified line to prevent the defenders easily shifting troops.  To further engage the defenders a primarily infantry assault lead by SS motorised division LASSAH and massed rail gun support takes the dot city of Makeyevka immediately adjacent to Stalino. In all in this sector 4 forts are eliminated and two cities taken. 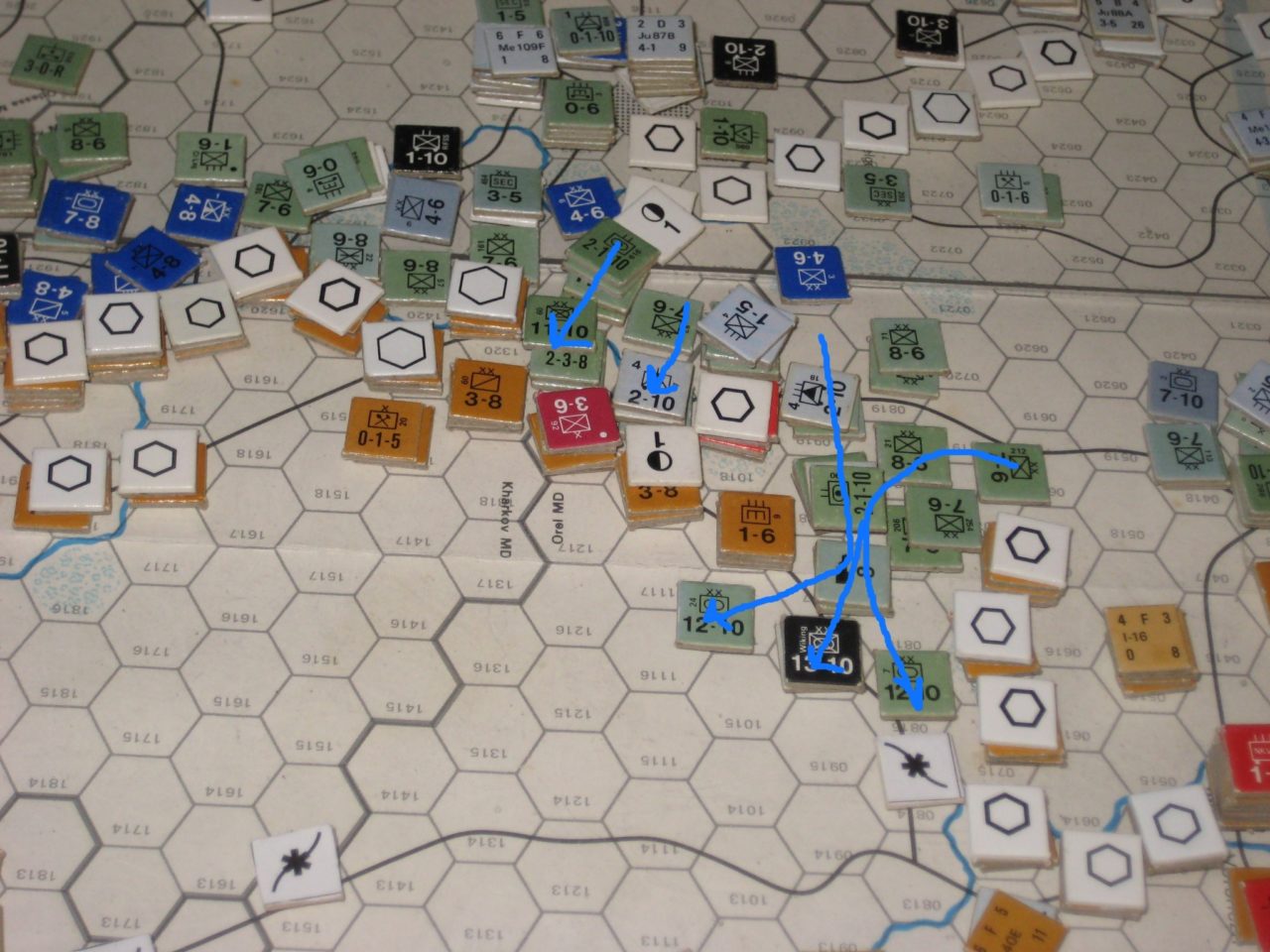 11th Army and Odessa: The Rumanians at Odessa move by administrative movement overland to preserve rail capacity for the use of Res Pts, rail guns and reinforcements

Rail engineers continue to convert lines into the Crimea to ensure the peninsular can be supplied next winter and engineers are positioned to fortify the narrow isthmus 50 miles west of Kerch.

Administratively 11th Army is placed under the command of AGS.

Air War:
A number of missions are undertaken to disrupt the Leningrad to Vologda railroad but only a single hit is achieved.Similar widespread attacks against the trail net behind the southern attack is more successful with two hits adding to existing damage limiting rail access to the assault zone.

The air space over Moscow is very hotly contested with both sides having large and roughly equal number of fighters. The Luftwaffe has to date got the better of the soviets in all  major engagements but the Soviet presence is sufficient to deter any lone bombing runs and only large set piece engagements are attempted.

One such is this turn where a medium sized battle forms NE of Moscow. German dive and level bombers with escorts attack a damaged River Flotilla bolstering the river defence line.

6 Lagg 3s, 3 Mig3s and a single I-16 intercept the formation of bombers which is escorted by a mixture of 8 ME1909 Es and Gs. The Laggs and I-16 engage the screen while the Migs attempt to bypass and head for the bomber stream. The one unengaged ME109 returns one of the Migs trying to slip past the screen but the others Return two of the bombers. The Interceptors eliminate two of the Laggs who fail to cause any damage but the plucky I-16 aborts a Messerschmitt and lives to tell the tale.

All the bombers avoid the RF’s AA fire and obtain 2 hits more than enough to sink the shipping. Overall the mission is designated a success and contributes to the elimination of the defenders in the ensuing assault..