The Soviet counter attack in the north hits home with full force. Significant pure armour attacks are launched on the single remaining supply line to the German spearhead north of Yaroslavl and at the rump of the column fleeing north from Moscow.

In addition a mixed force of reserves, new arrivals transferees and air power strikes at the eastern tip of the German advance. (The 14th pz a 16-10 unit placed on the critical crossroads at point 2107.) The results of these engagements will decide the outcome of the German attempt to isolate Leningrad and the north if not the entire war.

Finnish Front: No action north as at half strength due to supply difficulties and with no RPs arriving no attacks are allowable anyway. 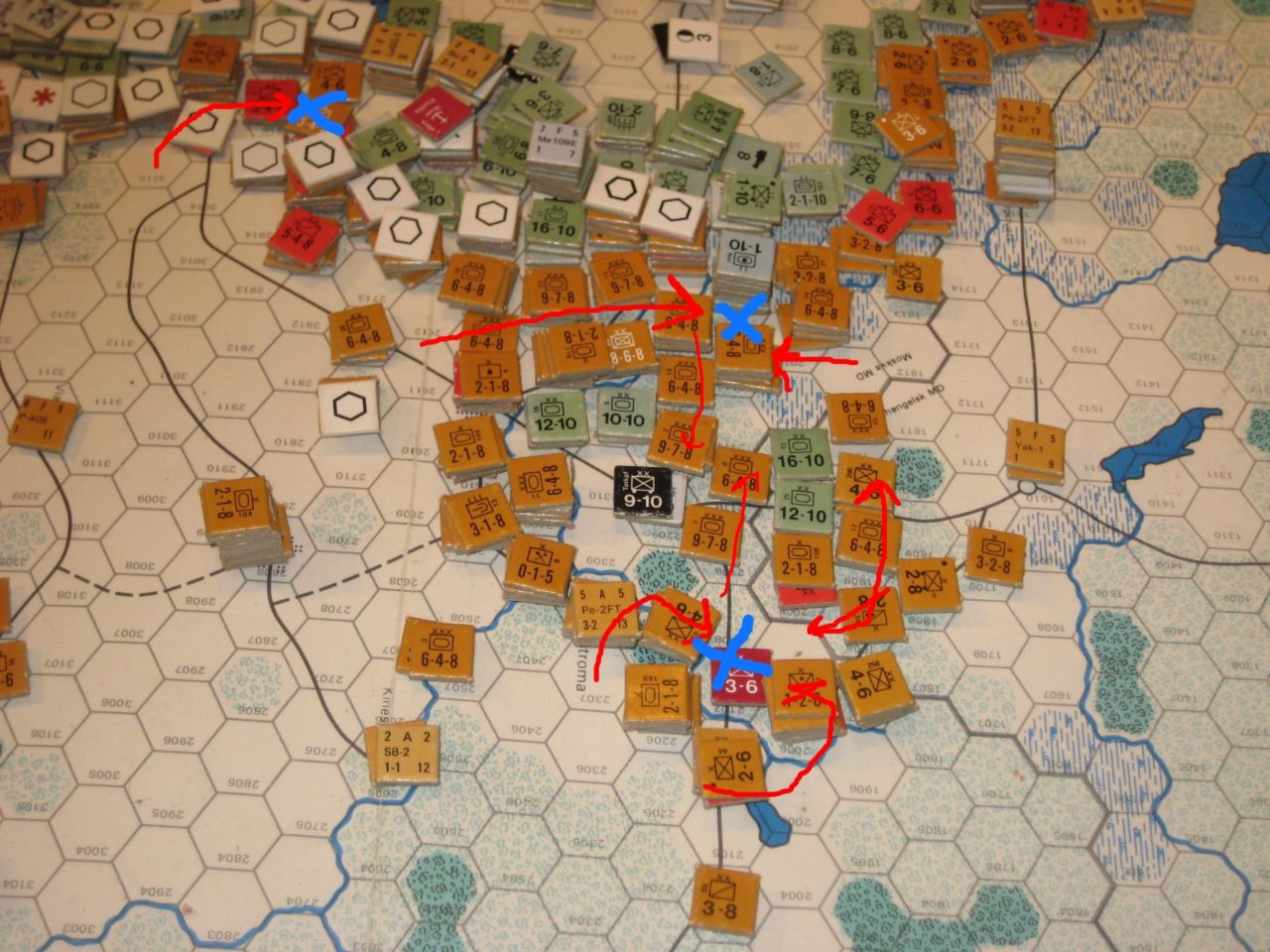 Forces move into the void where the Germans have retracted over the river eastwards just north of Yaroslavl.  Strong mech forces with artillery and katyusha support smash into the remaining German supply route tethering the spearhead to the main front. Forces also attack south from the north; some from an out of supply position; some moving west from positions just at the extreme tip of their supply lines around Vologda. The two forces meet engaging two Axis stacks. When the dust clears the battle field belongs to the Soviets who now have an armoured wall two hexes deep separating the German spearhead from the main body of troops to the west. The Germans loose another truck counter. Two surviving stugs are overrun by exploiting Soviet tank xxxs which stream east bisecting the cut off German spearhead.

The crowning glory of the counter offensive is the attack on 14th pz at point 2107. A supporting 1-10 AA unit is overrun and, completely surrounded, the Panzer unit is utterly annihilated. The first outright kill of a full strength panzer in clear weather in the war. Does this mark a turning point or is it just a bump on the Axis road to victory?

Voronezh Front: No action although a couple of Tk corps with support units previously ordered north have those orders countermanded and move back south due to the emerging battle at Rostov. 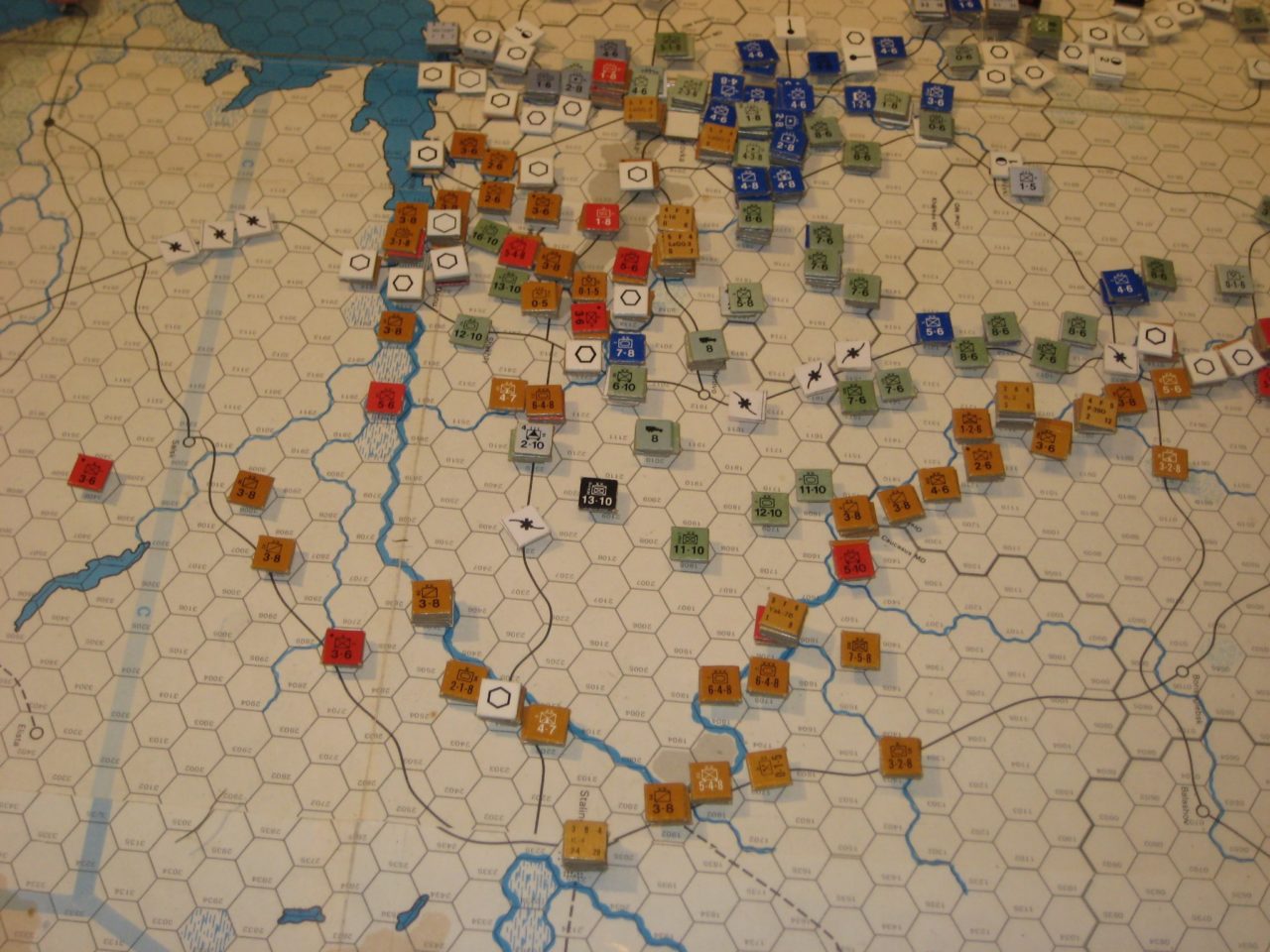 Chaos on the Southern Front while the German Sixth Army heads East.

Rostov Front: It is clear to the Soviet high command that the Stalino line cannot be held. To slow the Axis Stalino itself is fully stacked with NKVD “encouragement” the adjacent city of Makeyevka also stacked. Elsewhere minimal strength is left on alternate hexes to slow the pursuers as the bulk of the forces flee east effectively abandoning the fortified line.

The panzers blocking the hoard are reached and partly enveloped but at half strength the forces are incapable of mounting any sort of attack. In the eastern end of the river bend the isolated Tank corps extract themselves and one moves NE into the river bend and the other towards Rostov to help to counter Axis moves to develop and reinforce the encirclement.

Air War: Leningrad aircraft provide DAS as far east as they can reach. Further east all soviet air power is again directed at GS to aid the crucial attacks.

In the south air raids are carried out against Axis airfields and Valuyki airfield is put out of action. Over Mariupol a battle develops which claims 3 Soviets for one German fighter. Short range Assault bombers provide DAS over the retreated tank corps and some other key hexes.