“The car is here for the airfield sir”.

Thank you Walter. Walter step inside and close the door will you?

“Please call me Frederick we have campaigned together long enough now to drop the formalities.”  “Why oh! Why did we come to this godforsaken country?”

“The Fuhrer willed it?”

“The Fuhrer, the Fuhrer that jumped up little corporal.   Don’t be alarmed, we can speak freely, we are alone here”. “Remember Poland, France.  Remember that summer in Paris, Ah! Paris; the food the wine and the women?”

“Yes Sir, er Frederick I remember a certain little French restaurant off the cobbled square with the fountain and a certain waitress you spent quite a bit of time with. What was her name? Feefee, yes, Feefee Labonc”.

Ah!, Feefee, love was in the air that summer, indeed I seem to remember you caught the eye of a certain Mark I tank commander“

“Er, some of us have fonder memories of Paris than others.”

Yes Walter, only teasing, and then we went on to Yugoslavia and Greece. So how was it that with the Low Countries at our feet, France, the Balkans, Poland did we try for more, didn’t we have enough?  And so now we have to deal with the Bolsheviks.

When I was young, growing up in Duisburg my father would take me to the traveling fare. It came round every six months or so. There was one stall I visited every time – the shooting range. The top prize was a large bear as big as I was at the time. All I needed to do was shoot down all the metal ducks. I tried every year for 6 years and every time just as I thought I had them all another duck would appear.

These Russians are like those ducks, it does not matter how many of them we kill, how many we surround and capture, how many our SS “comrades” torture there are always more of them just over the horizon That big Russian bear is always just out of reach.

I tell you what the problem is with these Russians Walter they don’t know when to give up. The Poles did, the Greeks did and the French practically begged us to occupy them. Even the British went back home with their tails between their legs; but not these Russians, – has no one told them they’re defeated?

“Ah yes the car, we must not keep the men in leather waiting must we?”

“But answer me one thing Walter –honestly please. I did do right by the men didn’t I, ordering the retreat?

“Yes, Frederick you did right by the men.”

“Good, good that is the main thing although I do not think Berlin sees it that way.”

“I will give you one last order before I go Walter, the most difficult of orders, Will you promise me you will carry it out to the letter?

“Yes, of course as always”

“Please go now to the radio room and send this message. It denounces me as a traitor and coward.

“You must for your own sake, my fate is sealed but there is still hope for you, after all you were just “following orders””. “Go now and do this for me – if the time we have served together means anything.”

A few moments later Walter is leaning over the radio operator dictating the message to the shocked orderly.

A single shot rings out.

Walter turns to the guard at the front door and commands.

“You there, please go and advise the men by the car outside that their services are no longer required”

Finland and the Army of Norway:

Armoured RPs arrive from Germany at Helsinki and the Finnish 2-10 Arm X is rebuilt.

Little action in the far north as the Germans hold fire and conserve ammunition/RPs for when the Soviets are weakened by supply shortages.

AGN: A stay behind brigade is eliminated north of the Valdai where the Soviets straightened the line.

On the main front the Germans resolve to reconnect with the isolated spearhead.  Two large stacks attack either side of the soviet “doughnut” centred on the rail crossing.  The trapped forces are given permission to try and connect with the relief force. The northernmost attack is successful and supply is restored but no further progress is made eastwards.

Disaster strikes at the southern edge of the ring however where the stacked Soviet tank corps resists the German attempt to break through and the attack is stalled (5:1-2)=NE. The trapped forces move back East after the failed attack to gain the protection of the river bend just north of Yaroslavl and hope that the northern supply line can hold.

The maverick commander of the attack NE from Moscow is now trapped behind lines. Ignoring orders to fight his way east he turns his forces west and attacks the Soviet fort line on the East bank of the upper Volga. Aided by help from outside the forces connect with the main lines again. However his troops are spread out along an 80 mile long column hindered by slow moving artillery and infantry in the rear so only a single Panzer division crosses the river westwards. 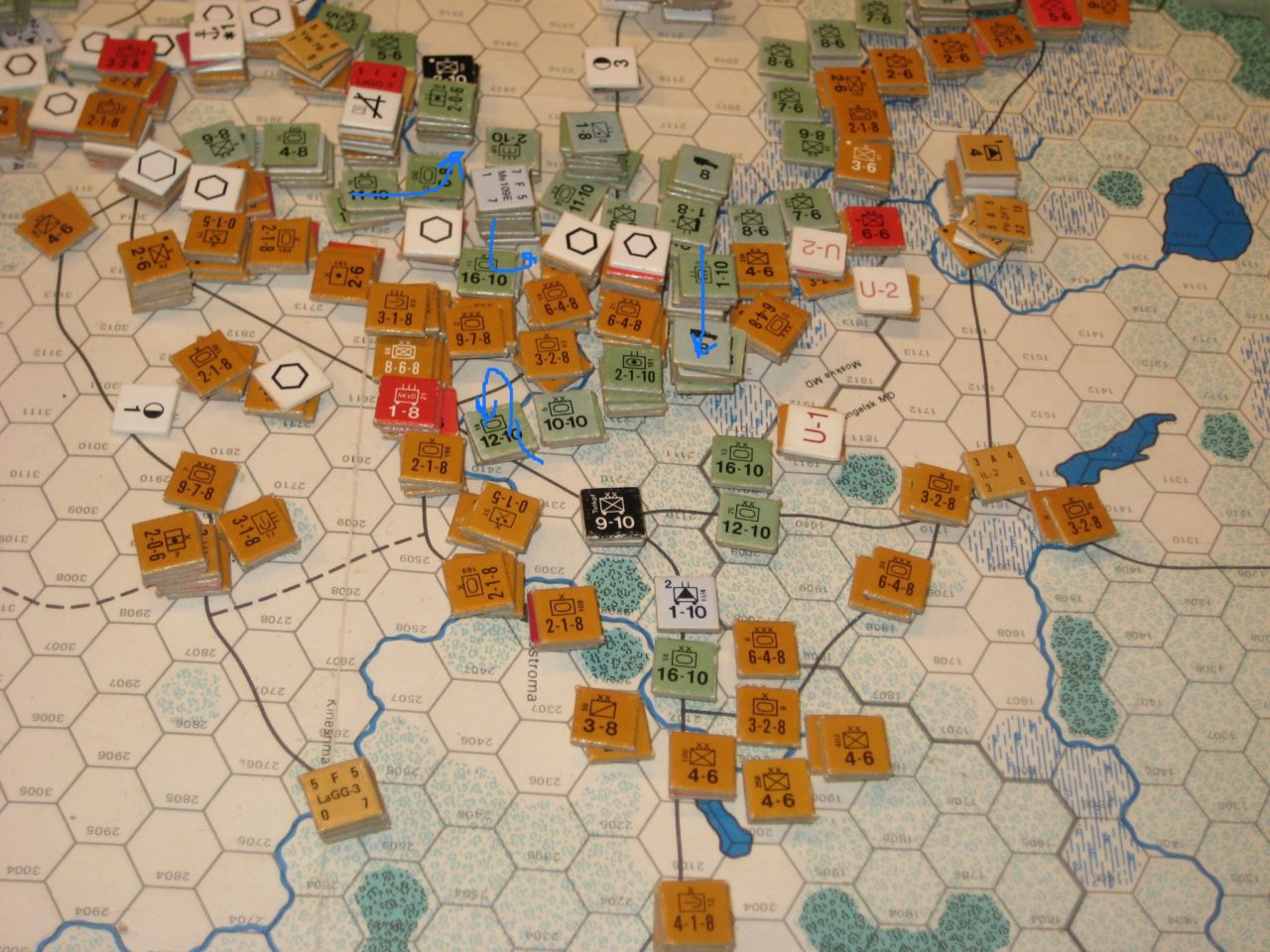 AGC: All quiet. Fortification and rail conversions continue, the latter to speed the arrival of forces moving north to assist the struggling Operation Meatgrinder.

AGC: In classic Blitzkrieg style the German armour concentrates and eliminates one of the corps formations at the “bottom” of the deep pocket in the great river bend. Armour pours through the gap swinging NE to trap two more corps and SW to reach the Sea of Azov just west of Rostov thus trapping and isolating a vast swath of Soviets and the  major city of Stalino. Meanwhile further north a mixed Axis force lead by Rumanians breach the fortified/river line gaining a bridgehead north of Gorovka.

The isolated U2 fort further north falls to an automatic victory. 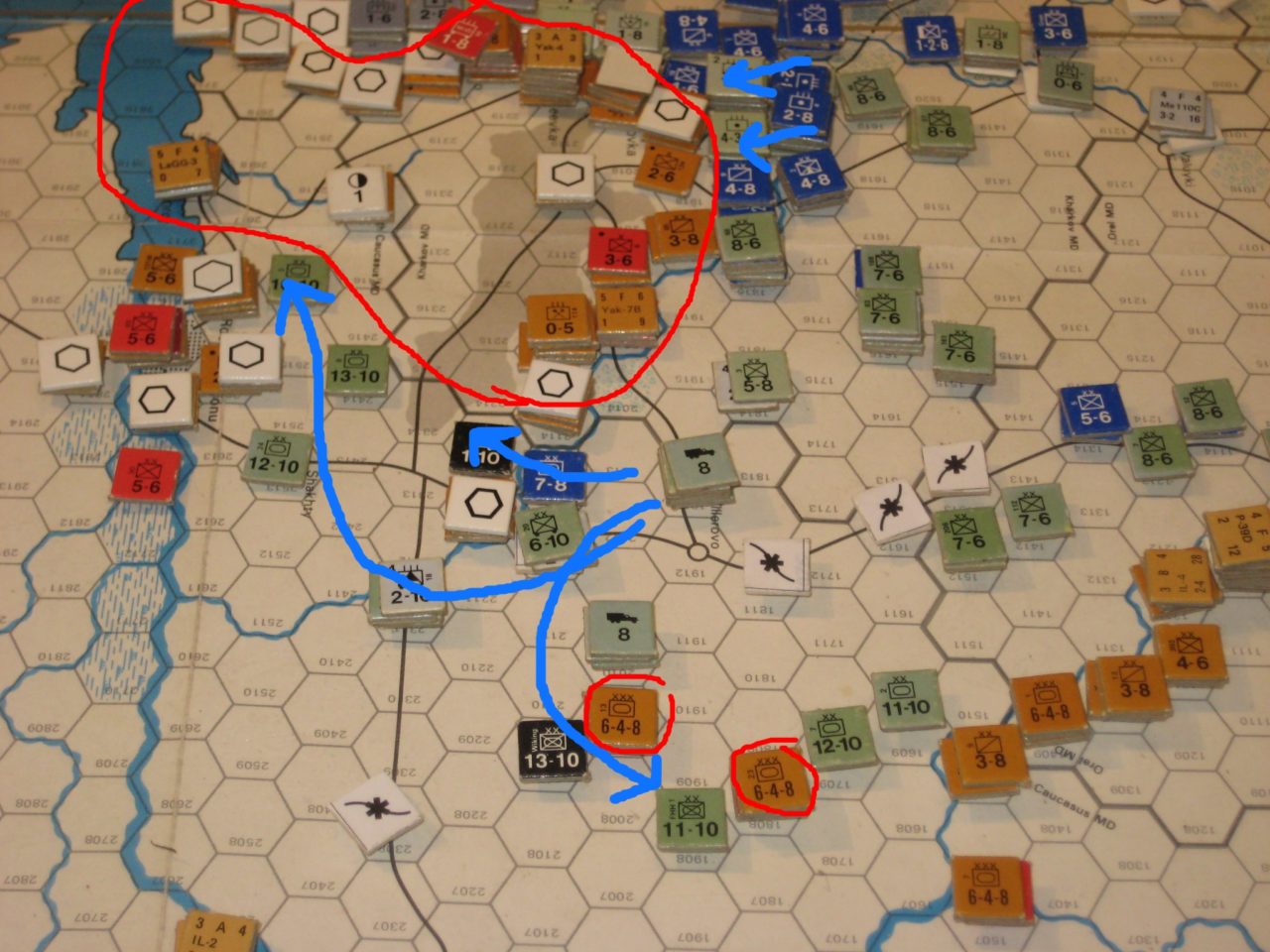 Breakout in the South, Stalino isolated

Air War: In the north all air activity centres on GS to bolster the desperate attempts to re-connect with the spearhead.

In the south the air war sees a more balanced mixture of activity. Some GS assists the Rumanians to break the fortified line and lone raids target some aborted aircraft on the ground with an unrepaired transport succumbing to one such mission. More rail lines are targeted but out of 10 raids only 2 succeed. Seemingly a lot of effort for such a small gain however last turn a single strategically placed un-repaired hit held up 5 or 6 tank corps transferring north so such raids continue.