Alexei pulled the controls gently left and then right as he swept over the leading edge of the friendly front line below.  Looking back he saw a wave in acknowledgement from his comrades. Dropping down over no-man’s land he pushed forward and almost brushing the tops of the occasional stands of birch sent snow flurries skyward from their heavy snow laden branches in his wake.

His orders were as usual quite perfunctory, “Fly north till you find your target, you will know when you are there, then attack”. His passage over his earthbound comrades had awed him despite his years of experience on the northern front around Moscow. He had flown over lines of cavalry, ranks of artillery, columns of tanks and the unmistakable formations of rocket equipped trucks also heading north. But what impressed him the most were the long files of men marching forward with a spring in their stride. After 18 months of brutal warfare they were going to give Fritz a taste of his own medicine.

He flew on north, the weather closing all the time. Keeping low to avoid icing and to minimise the lead time for ground observation it was difficult at times to distinguish the grey of the snow covered ground and the grey of the laden autumn sky but he was soon aided by his approaching target.

Stretching across the horizon east to west was a black line clearly separating land from sky.

Stretching out as far as his eye could see was a miserable tide of bearded, bedraggled and lice ridden humanity, in stark contrast to the proud warriors who had driven west and who had almost succeeded in their aim of conquering his proud country.

Now the boot was on the other foot and Alexei was about to deliver a good kicking.

He pulled back on the stick to gain altitude for his attack run. Some of the young bucks in the flight suggested strafing along the column to cause maximum damage; they generally died young.

Alexei however had developed his own style and was a longstanding veteran of his squadron as a result.

He rolled right and dove diagonally across the column of enemy troops and machines. Finger pressed on the trigger the bullets from his guns cut a swath through the enemy ranks. Some targets dived for cover others seemingly oblivious to the danger plodded on.

His low approach and swift transit meant the enemy had no time to react to his attack.  Pulling out from his dive he swept the plane up and left spiralling to gain more altitude. His reconnaissance by fire had revealed an enemy tractor struggling to pull a large artillery piece along the road now churned to soupy, icy mud by the passage of many before it. This was his target. He flew back across the column and pressed the bomb release. His twin payloads of destruction fell earthward and landed right on target. Hearing the crump, crump of the impact he looked back to confirm that he had hit his mark. Satisfied, he dropped down to floor level for his flight home.

Below him those who had sought shelter in the frozen earth rose up…..and the column shuffled on…..

Finnish Front:  Soviet forces infiltrate across the centre of the string of lakes south of Murmansk while ski units sweep around the left flank of the enemy.  On the road to Salla troops drive NW. The Axis line from here to its termination south of Murmansk is thus fragmented by manoeuvre and threatened with isolation.

The only attack is from Salla where minor units are exchanged.

Below the Arctic Circle the elimination of the Finnish army and its Nazi accomplices continues with the destruction of 9th Panzer. This gallant unit has survived attack after attack and held back the Red Tide for months and months but inevitably the dice finally rolled against them.

For those in the Finnish and German High commands who thought perhaps there was hope to salvage the situation comes a further and probably final blow which shatters any such dreams.

The Soviets open another axis of attack this time directly along the coast from Vipurii driving direct for Helsinki. A massed attack lead by an 11-8 mech corps shatters the centre of the Finish fortified line and the 11-8’s advance isolates a further fortified position. Meanwhile just to the north the 3-8 cavalry xx again lunges forward over frozen lakes and infiltrates the Axis line deep into the rear. 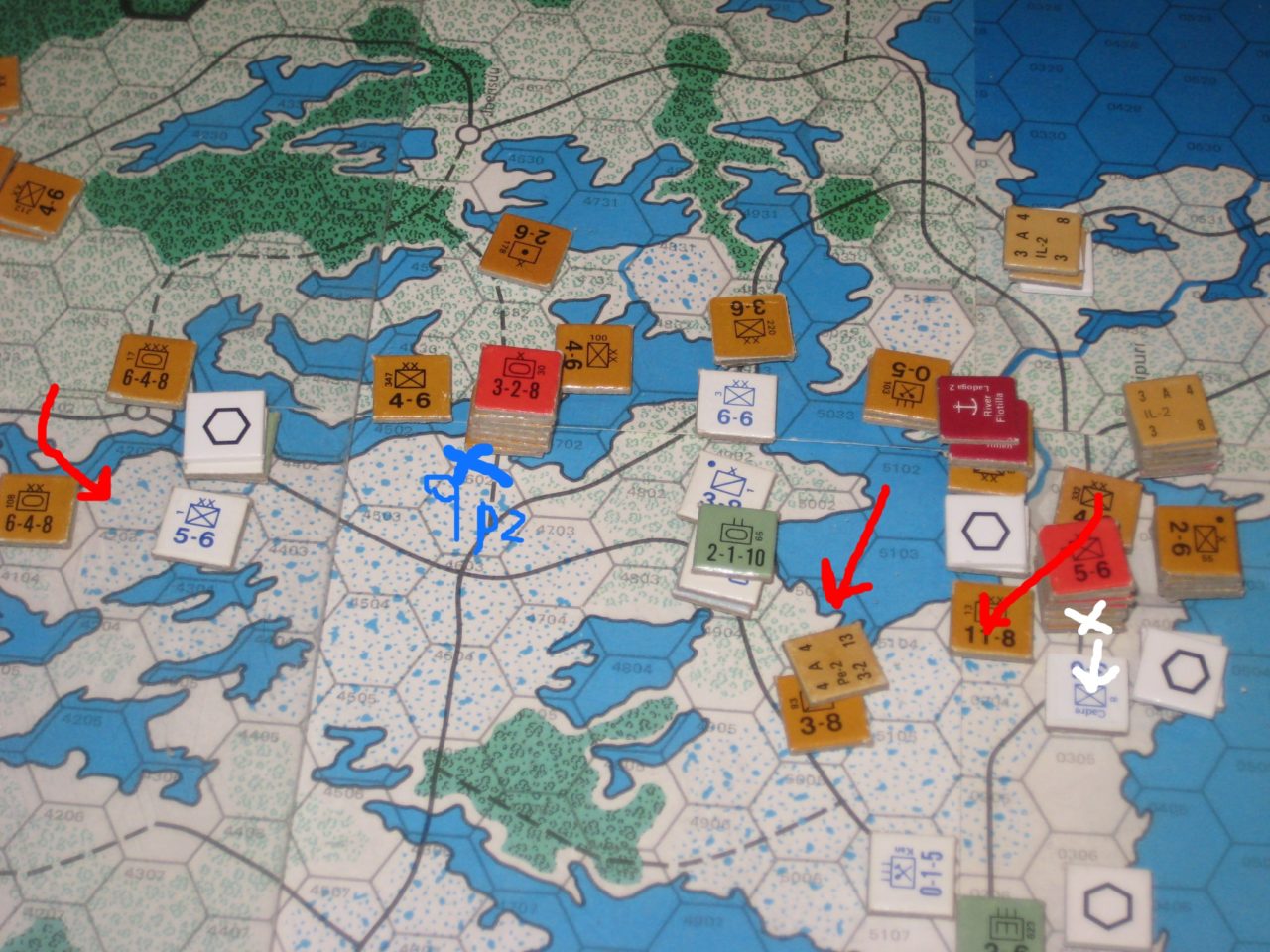 Finland on the Brink

Leningrad Front: The Axis policy of strengthening the line in the north and counter attacking in the south starts to pay off. Despite their best efforts the Soviets cannot concentrate to achieve sufficient odds to mount an attack against the stiffening Axis MLR. They do mass adjacent to the rail line to Kalinin and eliminate a wooded fort but this takes them no closer to the critical E-W rail line. It will however give them an extra hex purchase for their impending attack against the central hard nut of Axis resistance – the fortified forested hex barring the way along the rail line south from Leningrad.

Around the easternmost bulge of the rapidly shrinking German army however it is a different story. With a Guards Mech unit in the van German resistance is shattered and the unit drives south meeting comrades advancing north. They trap a full strength and a cadred panzer unit.  Meanwhile by sheer weight of force another panzer is eliminated. 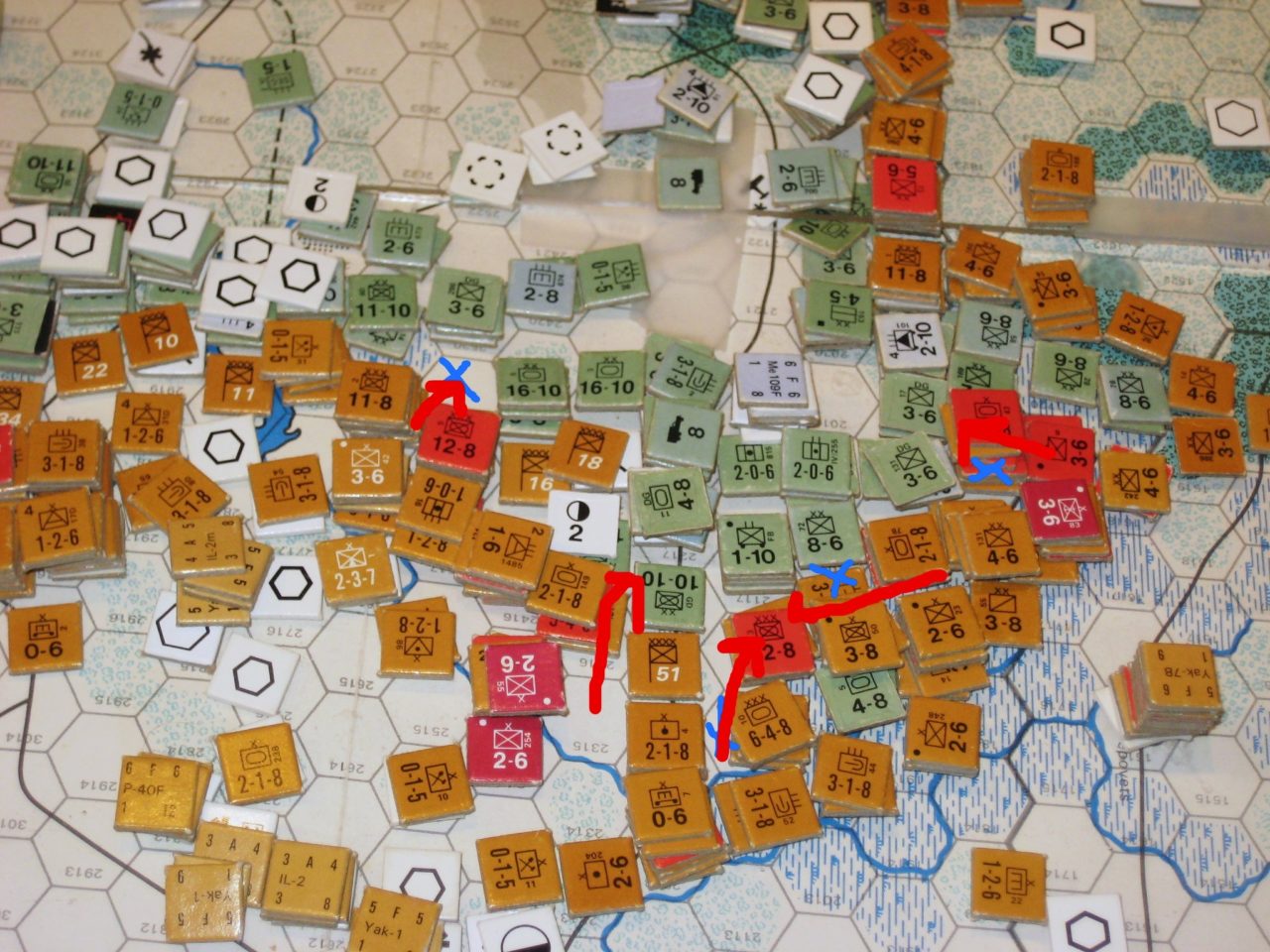 Moscow Front: With the leading edge out of supply the drive north stalls at the tip but follow up forces eliminate the isolated German fort and another infantry division is cadred and its supporting flack and engineers eliminated in front of Kalinin.

VICTORY: Central Moscow falls to a massed attack!!  With engineers leading the assault artillery including rocket and artillery divisions and siege guns join with guards infantry to storm the Central Moscow hex which is retaken.  This is a severe blow to the Nazis hopes of holding the city and the news is suppressed back in Berlin.

Air War: No notable large battles but a 0-8 Finnish AA unit turns back 3 Soviet bombers denying them a column shift in one of their assaults.

The Soviets complete a large airstrip building program south of Leningrad to allow their short range fighters to keep pace with the advancing lines.