The column stretches for 100 miles, A miserable tide of bearded, bedraggled and lice ridden humanity, in stark contrast to the proud warriors who had driven West a year ago. With uncertain and sporadic supplies resulting in fuel and food shortages the mass shuffles forward; the tail trying to keep up with the head. The tail constantly harried by the snarling biting beast at its back. The Russian Bear has awakened from its summer hibernation and is prowling the steppe once again.

In the column’s wake the detritus of 20th century conflict; burned out and abandoned vehicles, the rotting corpses of dead animals and men and hanging over all the smoke and acrid stench of burning fuel oil, buildings and funeral pyres.

Black dots approach from the south and a cry goes out. Some dive into the snow filled ditches and icy cold water lining the road desperately seeking cover. Most shuffle on, seemingly oblivious or immune to the roar of enemy planes, the rat-tat-tat of bullets and the crump of explosions sending shards of death into the mass.

This is the road to Velikiye Luki. This is Total War in December 1942.

Weather: Snow falls across all of Russia in A, B and C zones with Mud in D and Frost in G.

Finland & army of Norway:  Quiet in the North.

In southern Finland a counter attack is made against the 3-8 cav xx which infiltrated last turn. The Finish 3rd Inf XX (6-6)  falls back and the 9th Pz and 3-8 cav* is joined by a newly arrived 2-1-10 pz II to force the Soviets back across the icy lake and the 3rd escapes to freedom. The 9th pz returns to its blocking position in the exploitation phase. 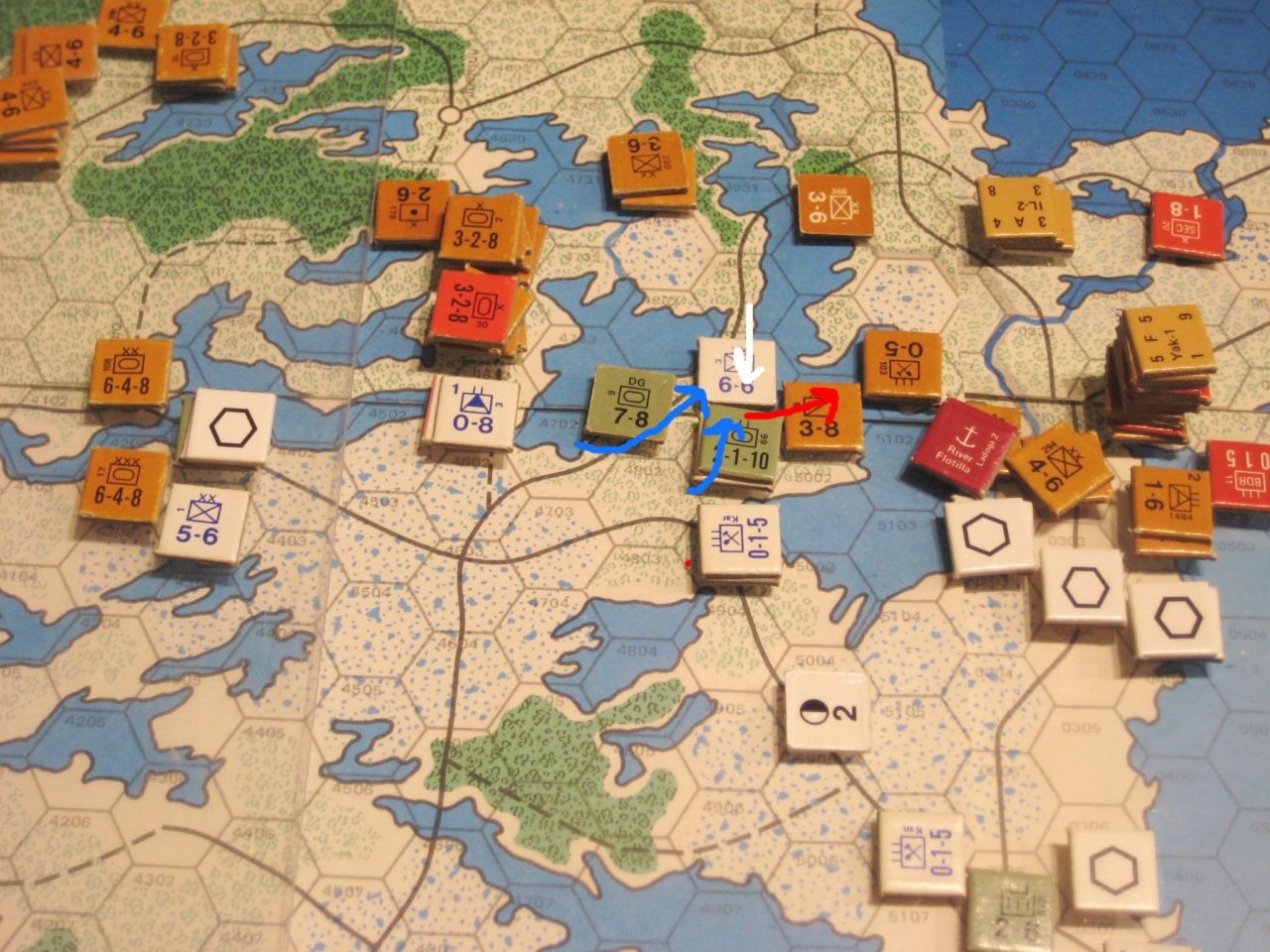 AGN: The Axis continue with the policy of blocking the northern thrust and attacking on the southern flank. They do however assemble an attack formed from inf xxs, engineers and mobile units. With Viking leading the charge the force hits a 11-10 tk unit which has advanced into the Valdai lake system.  It is annihilated and the cadre with nowhere to run is cut down. The line is restored but weak spots still remain.

This is nowhere more evident that in the right of centre of the line where the Soviet Guards Mech unit broke through. With a few scattered cadres able to fill the line there is nothing the Axis can do to hold back the drive only slow its progress.

The 3 panzer/pg units at the trailing edge of the march West risk encirclement but it is everyone for themselves now at the exposed eastern end of the column.

Immediately east of Kalinin however a serious counter attack is launched with a view to caving in the Soviets left flank and pushing east . The attack targets a large stack of artillery and katyuskas which is supporting a 10-8 mech , they fall back with the 10-8 covering the retreat.  The German panzers concentrate in the advance and exploit NE overrunning a U2 9-7-8 tank unit oblivious to the DAS above it.

40 miles northwest of this prepared assault a hastily mounted attack comprising of a hodge podge of cadres, engineers, flak, security and fleeing pz cadres eliminate the U2 9-7-8 tx unit which had captured the rail line a fortnight earlier.  Supplies are thus restored to the whole army but the hold is tenuous and open to counter attack.

The cut off fort plays no part being some 20 miles behind the front line.  The troops simply sit tight and await their inevitable fate. 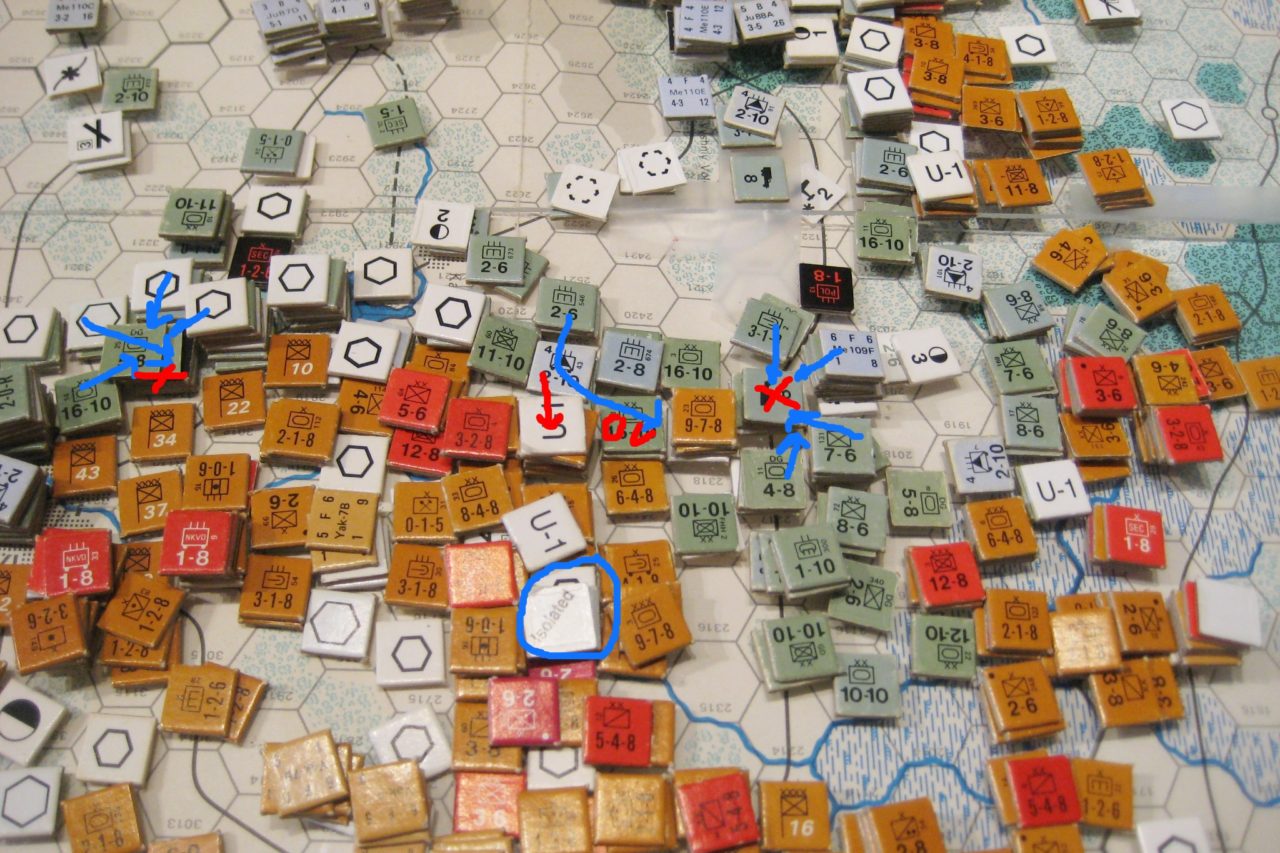 Moscow sector: An attack is mounted on the 26th Army which temptingly projects into the German fortified line. The stack is eliminated with one Guards cadre all that survives the determined attack.

AGS: Rumanian, Italian and Hungarian troops start to consolidate their defensive positions in the Don bend but under the guise of these troop rotations a medium force of infantry with some mobile units is moved to the area of the convoluted river bend south of Voronezh. This bend protrudes into the Axis lines and compromises the use of the rail junctions in the area

The plan is to mount a spoiling attack with a view to clearing the east bank of the river adjacent to the rail junction and if momentum is achieved to capture and eliminate the two Soviet airbases on the east bank which repeatedly interfere with rail bombing missions in the area. Resources for this attack are very limited and will not stand determined resistance but the axis/allies are under pressure from Berlin to take action to try and divert forces and resources flowing north. Furthermore at the southern end of the planned breach Trucks extend the supply lines into the river whereas on the Soviet side their lack of ability to stretch their supply lines means that a long section of their front is now at U4.

Air War: Massive GS aids the attacks by AGN with limited activity elsewhere in Zone B.

In Zone C a series of raids is mounted ostensibly a continuation of the ongoing campaign against the N-S rail but concentrated to isolate the area of the planned attack.  4 of the 6 raids are successful..