Finnish Front: Constantly replenished with Resources the Soviet drive east along the road to Salla continues unabated and unseats a Finish regimen/German Ski II from the city capturing it.

The 9th Panzer cadre is unattacked this turn as the Soviets muster their forces and the two Tank xxxs move north to try and make an end run around the whole lake system south of the Arctic Circle. They are checked by a German Reserve division in a fortified position at the end of the frozen causeway at Kuopio

By contrast the freeze allows a surprise move by a soviet Cavalry division north of Viipuri who dashes over a frozen lake hexside flanking a strong position held by a Finish 6-6 xx in forest which is now in danger of isolation.

The drive south from Leningrad slows to a crawl as German resistance stiffens and their defence becomes organized and swelled by Mech divisions moving into the area. Nevertheless weaknesses are ruthlessly exploited and two separate one hex advances menace the Veliki Luki road now only 20 miles distant.

The main threat however is further to the east as the German bulge extending north is contracted at the neck. One advance lead by a guards Mech XX overruns a 2-10 flack unit in exploitation and reaches to within 16 miles of the Germans rail lifeline leading West down which all units fleeing to safety are hoping to use.

The only crumb of comfort for the Germans is a skilful defence by a 3-6 cadre/Flak combination which holds back a massed attack by guards infantry and support troops. Here the defenders channel the attack towards clearings made in the light wooded cover and the flak unit firing over open sites repulses wave after wave of attackers and holds firm.

At the head of the retreating German mass in the far East however the Soviets massacre two hexes of Infantry/Artillery eliminating a division and 6 artillery regiments. Trapped in the freezing, driving snow the divisions offers little resistance and the artillery caught in the open in travel mode are eliminated outright. Only a small infantry cadre escapes the debacle retreating over the frozen swamps and somehow finding a route to friendly lines. 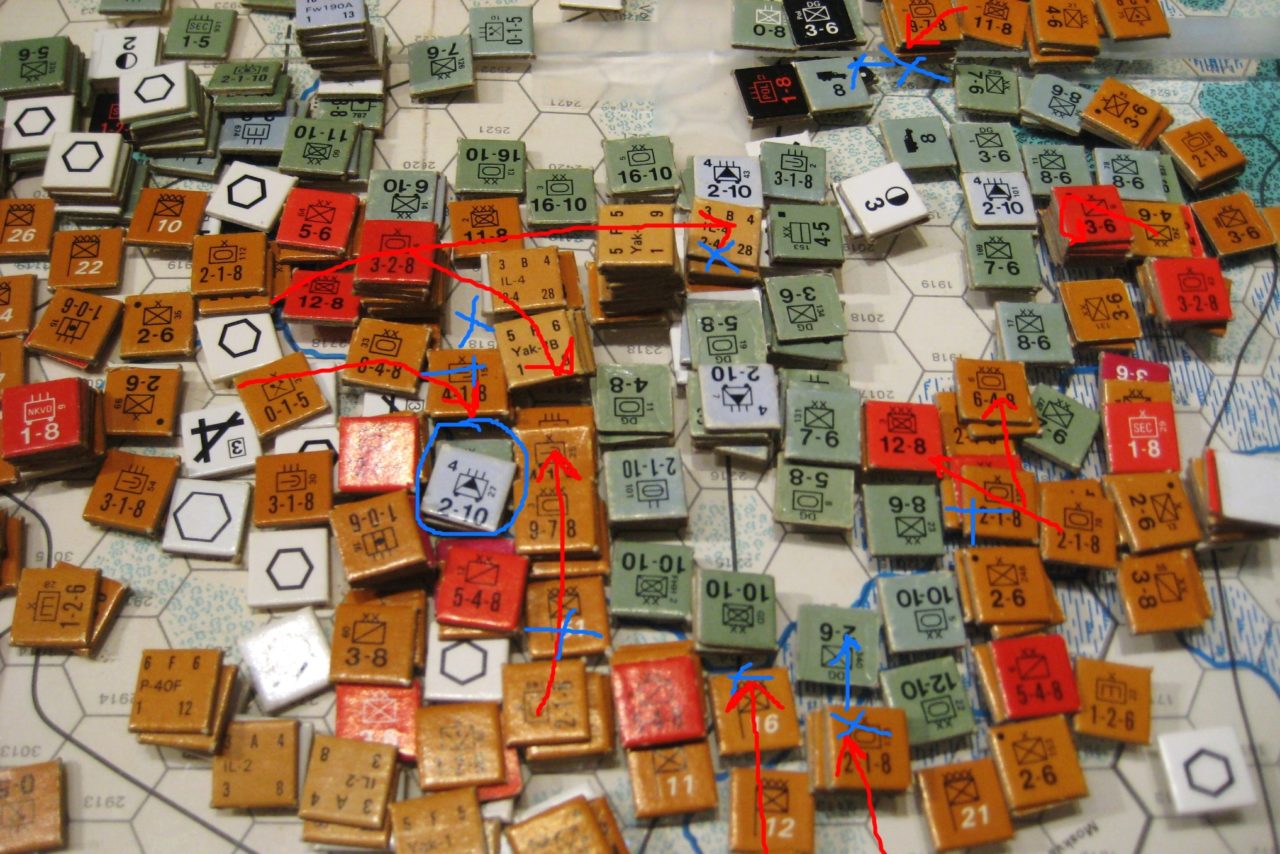 Battles for Veliki Luki and the Vologda rail line

Not content with the two hex breach of the German upper Volga river line Russian forces breach NE of the main gap and advance over the frozen river isolating the remaining defenders. Two of the three hexes are eliminated with a single isolated hex forming an island of resistance where a month ago stood a fortified river line extending for 100 miles.

From the bridgehead established last month the Soviet armour advances north. Out of supply they attempt a risky 3:1 assault against a weak defender holding the rail line with air support. Mustering their own air-force in the assault the soviets achieve a DH pushing the survivors back and capturing a hex of the vital German rail lifeline.

The Soviets do not expect the conquerors to survive a German riposte but this will cause the Nazis great difficulties. The advancing tankers are given a large umbrella of air support and await the inevitable counter attack.

The main difficulty now facing the Soviets is that both tips of the advance in the north and south are operating at the extreme limit of their supply net and, in the case of the units on the rail line, beyond it.

Moscow Front: The Soviets consider withdrawing the 26th Army which now protrudes unto the German line following the retreat of the 34th but decide instead to reinforce and to try and hold the bulge.

Instead they concentrate all efforts on assaulting Moscow NW. The arrival in force of 9-6 artillery xxs and the new Guards Rocket division allow an attack to be planned against the substantial defences. In place for a year the defenders are well dug in with tank support. The Soviets have assembled siege guns, engineers, Guards infantry and the above artillery/rocket concentrations to achieve a straight 3:1 attack. The ferocity and intensity of the attack stuns the defenders who fall back loosing half their number as the Soviets storm the city. Not only does this grant the Soviets their 4th city hex it also links the Kalinin/Moscow rail line to the rest of the Soviet rail net and extends the supply line to the front.

Voronezh Front: Identifying a potential weakness in the defences the Soviets start to move secondary troops, engineers and resource points to the gap between the Tula fortified bastion and the river which runs north from Voronezh where there is a single fort line in open country. They will establish a secondary fort line here which will result in a riverine or double fort defence, when completed, extending from the Sea of Azov to Moscow. Here as across all fronts the easing of pressure on the defences allows the Soviets to move NKVD infantry to replacement centres for disbanding to boost the falling infantry replacement rate.

Stalingrad Front: No action; Engineers continue to rebuild the damaged infrastructure and second line tank corps form stacks at rail junctions to be in position to react against any local Axis attacks.

Air War.: The precipitous withdrawal of the Luftwaffe from the threatened airfield cluster now at the tip of the Soviet thrust north from Moscow allows the Soviets free reign to provide GS to a number of attacks and place defensive GS on the furthest north out of supply tank units doubling their strength.

A couple of skirmishes do take place and one IL-4 is exchanged for a ME110C protecting the Veliki Luki line and no rail hits are scored.