Anton lifted his ear from the rail track. “It’s coming, get ready” he shouted..  His jumped down the embankment and sprinted to the cover of the treeline along the side of the railway.

The train came pounding along the track, steam belching, for all it was worth. These woods were a perfect ambush site and the engineman was taking no chances. It was a troop transport, Anton’s favourite target. Stealing the enemy’s supplies was one thing but he had vowed revenge.  Anton watched as the engine and first flatbed with its antiaircraft guns pointing skyward passed; counted three more carriages, then shouted “Now”. A plunger was pressed. The explosion lifted the fourth carriage two feet into the air. It dropped back toward the rails but they were now so twisted out of shape that the wheels found no traction and the carriage started to slide sideways. As it twisted the coupling to the front gave way. The engine and front of the train sped on to safety.  The momentum of the last five carriages drove them forwards thrusting the middle two skyward till they in turn fell back and slid down the bank turning as they went. “Fire” shouted Anton.  The forest treeline erupted into a hail of fire pouring into the carriages. Soldiers that had been “lucky” enough to be thrown free were the first to be cut down.

Some of the group used captured machine pistols but Anton still favoured his father’s old hunting rifle. He raised it, saw a soldier struggling to get out through a window and shot him dead.  A few stray bullets whizzed over the heads of the attackers but they did not pause. Inevitably the occasional shots became denser and steadier as the defenders got organised. Anton glanced up the track and saw more soldiers running back down the tracks from the engine which had stopped a few hundred yards away. “Time to go comrades” he cried. . He turned and joined his fellow partisans as they melted away into the dense forest undergrowth. The enemy would not stray more than a few yards after them for they knew that to do so was suicide.

Later that night the group sat around the campfire exchanging stories of their daring deeds of the day. It was six months since Anton had joined the band. His fearlessness and daring ruthlessness fuelled by his need for revenge and redemption had soon got him noticed and now he led a Section. Indeed the band as a whole was beginning to be referred to as “The Anton Brigade”.

He carved a sixth new notch on the butt of his father’s hunting rifle and wiped it clean. Today was a good day. 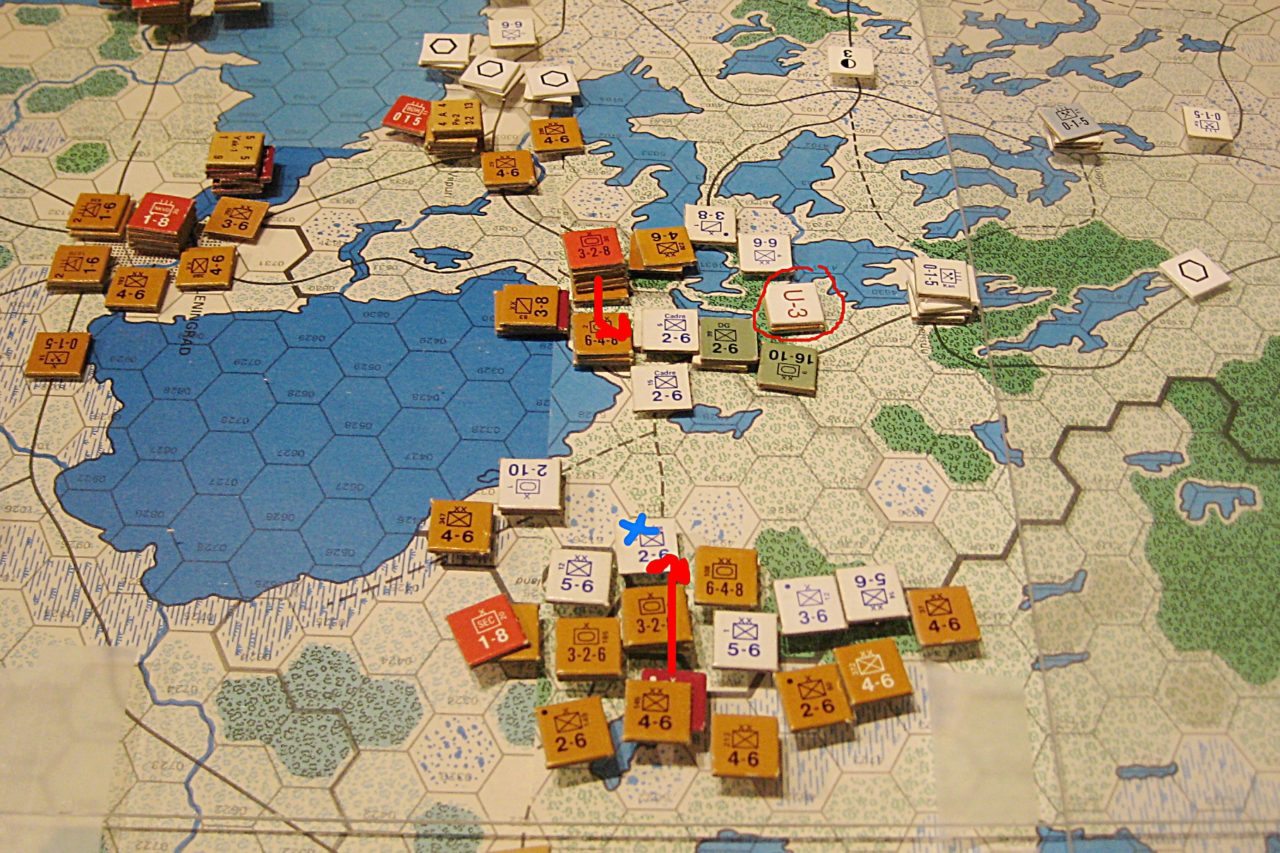 Finish Front:  The line in front of Murmansk is now stabilised and reinforcements continue to flow from the south strengthening the central front and allowing some fight back but the Soviet advanced forces are now out of regular supply so progress is slow targeting weak units such as lone bdr regiments.

Around the shores of Lake Ladoga attacks east to west and west to east damage Finish defenders but the victors content themselves with a pair of strong one hex advances. These threaten to trap the Finnish main front line without the need to expose Tank units to a riposte by the powerful 9th Panzer.

The stack comprising a 16-10 and 12-10 panzer cut off and surrounded is finally eliminated and with no retreat route the battered survivors trapped in the swamps NE of the main German lines surrender. This assault however takes the whole striking power of the Soviet Tank Corps in the area so little other activity takes place here other than strengthening and consolidation of the line; with DAS where needed. A hex of forces jutting into the lines is evacuated save for a lone 6-4-8 acting as a breakwater to split the German tide of advance. 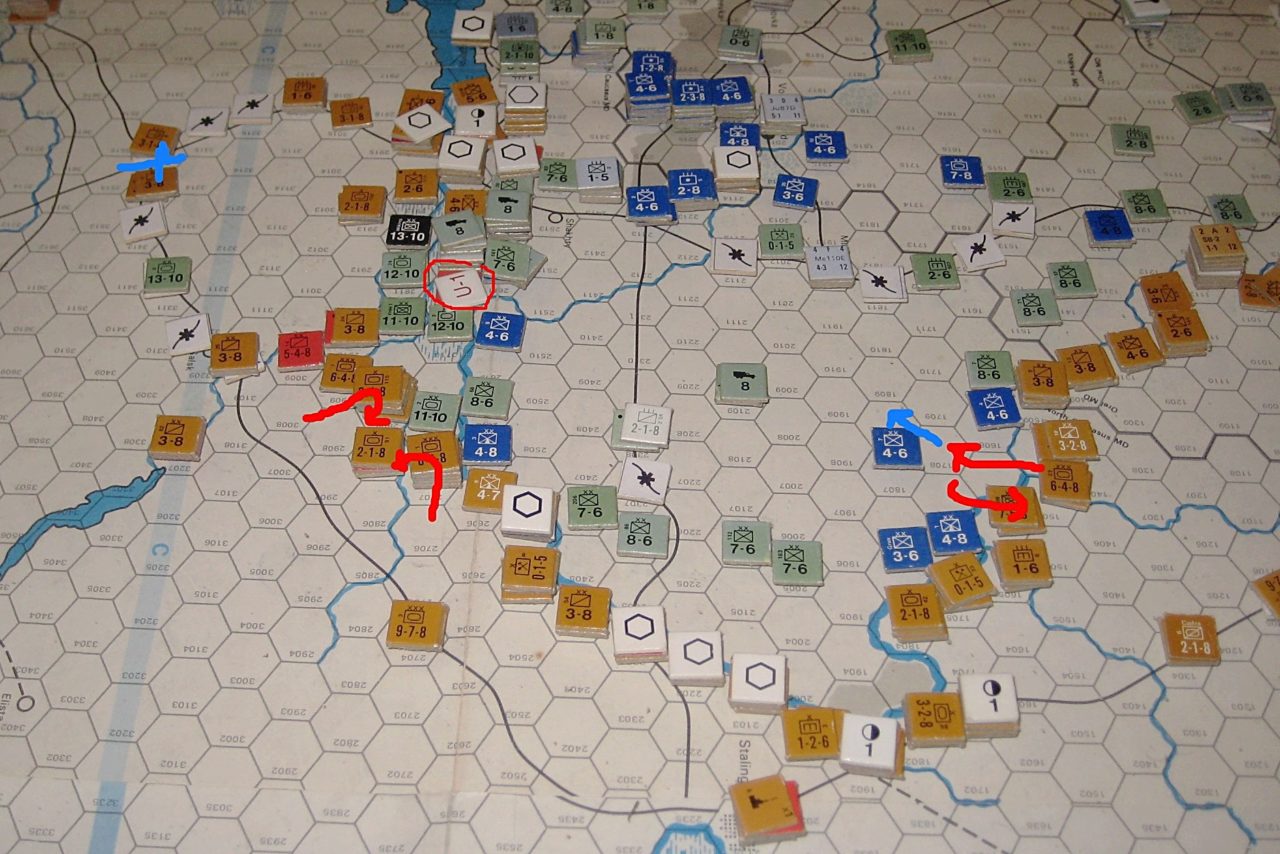 Voronezh Front – No activity other than rail repair and a small number of troop movements south.

Rostov Front: The Soviets assemble an armoured strike force to engage the Axis forces south of the Don but fail in their assault against the northernmost panzer (NE).

Forces from inside and outside Rostov finish off the cadre of the 6-10 motorised infantry division positioned south of the city.

Along the north bend of the mighty Don a spoiling attack by a tank corps fails to inflict losses against a Rumanian infantry division which retreats in good order. The Attackers withdraw back over the river in the exploitation phase.

Air War: As previously most Soviet air flies Defensive Air Support in the Moscow area. In the south a navigation error places a flight of 3x ME110s within striking distance of powerful Soviet fighter forces and two of the three are eliminated in the engagement. In the north a mutual elimination is achieved by a pairing of a ME109F and I-16.