Anton paused for a moment from bailing straw at the back of the small store attached to the farmhouse he had lived in all of his 18 years. He was helping his father at the modest abode he shared with his father, mother and older sister. Theirs was a simple subsistence existence well off the beaten track, or to be more precise some 20km at the end of it; so the war to date had completely passed them by.  He gazed out across the vast plain of central Ukraine the “breadbasket” of the nation. A solitary hawk was circling in the distance. Today was a good day.

The rare sound of a motor vehicle approaching caused him to look up, his father gestured for him to stay hidden while he walked to meet the vehicle as it slewed to a halt in front of the farmhouse.

Four soldiers all dressed in black got out and walked towards the house. Peeping from around the barn Anton saw his father remonstrating with the men, unfortunately he was still carrying his pitchfork and made the mistake of raising it. The leader of the group reached into a leather holster pulled out his pistol, raised it to head height and shot Anton’s father who dropped at his feet.

Panic gripped Anton and with a shame that remained with him and shaped him for the rest of his life; he turned and fled. He ran to his hiding place, a small hollow under an overhang in the bank of the brook that ran along behind the barn. He had used it often as a child when his father’s wrath had spilled over following some misdemeanour or other.

He heard the screams and pleadings of his mother and sister as they were dragged from the house.  The cries were soon muffled and replaced by the laughter and grunts of the men in black. After some time two more shots rang out across the steppe.

Curiosity getting the better of his fear Anton peeked out above the bank. He saw one of the men pull out a gasoline can from the rear of the car and douse a stick with some hessian sacks bound with twine they had gathered from around the farmyard.  The man lit the impromptu incendiary device with his cigarette butt and tossed it onto the farmhouse roof.  Dried from the summer heat the thatch caught and burned instantly. Then one of the men started walking towards Anton. Had he been discovered? Anton ducked down and into his hiding place. Moments later his hair and face were splattered by warm piss cascading down the bank. Was this a ritual humiliation before his own death? He pressed his face tighter in to the now moist earth and held his breath. Moments later he heard the man walk away and then the car engine burst into life as it moved off back down the track. He lay there frozen for 15 more minutes before emerging from his hiding place. The farmhouse was now well ablaze far beyond his abilities to save it. He fell to his knees and vowed that he would never run again and that he would not rest until the Motherland was rid of every last one of these enemy animals.

He moved north for three weeks; on his back a pack containing all that was salvageable from the farm and his father’s old hunting rifle.  Living off the land and avoiding the main towns and occasional enemy patrols he took succour and shelter where it was offered.  Late one night he reached his objective, a swath of dense forest where it was rumoured some men had formed a small resistance group. They made contact an hour later…

The Soviets defend the supply line to the Arctic

Finnish Front:  Now the blockage is cleared to the south the Soviets rail a large force of primarily infantry type units north to occupy the rail line east of the 9th pz thus re-establishing the supply to Leningrad. Troops also move north with some Res Pts to renew the central push into Finland.

The isolated cadre trapped against the lakes to the north of Leningrad finally surrenders. (DR, no retreat route)

Leningrad/Moscow Fronts: The Soviets content themselves with reinforcing and consolidating the front line and tightening the noose around the trapped German mobile corps. They do manage one attack against one of the northern panzers but it manages to retreat onto its compatriot following a DR result.

Voronezh Front – No activity other than forces in transit and new recruits moving to the front. 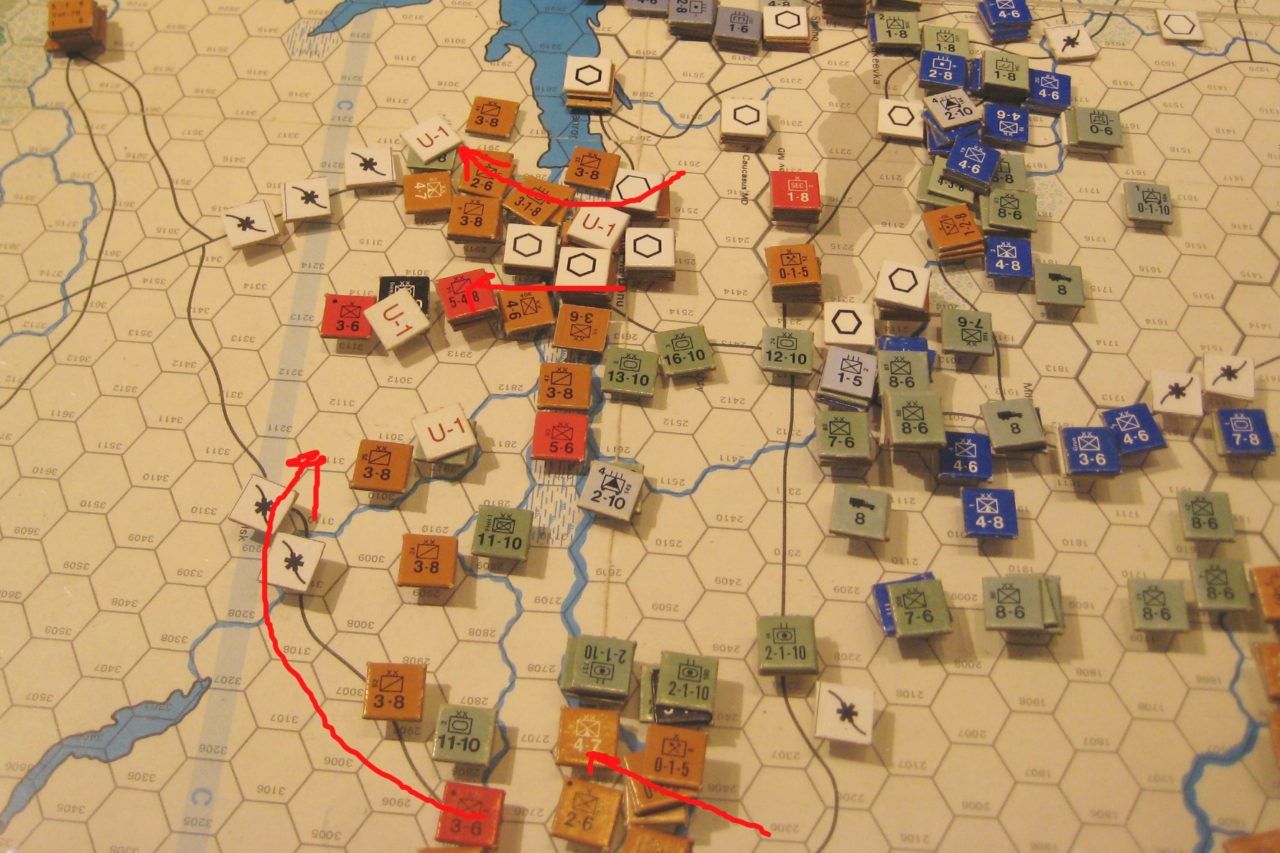 The Soviets desperately hang on to Rostov

Rostov Front:  With the crisis abating in the north this Front receives all forces arriving from the East this turn.

The troops fleeing towards Rostov take advantage of the Axis pull-out from north of the city and forces fleeing south occupy/transit through the city and mass to attack a 6-10 mot/AA combination at the western end of the ring which is isolating the city south of the Don. A 2-8 Mot cadre is all that remains after the attack and supply is restored to Rostov and to the light screen remaining to the north and west of the city.

The Axis have bridged the Don to the east of Rostov and formed a chain of C/M blocking forces.  This chain prevents relief forces reaching Rostov from the East but the Soviets surround the block with ZOCs in the hope that the Axis will be forced to withdraw by the end of the month and Rostov can be retained.

Air War: Around Moscow new airfields receive fighters transferring in from other theatres. A flight from Moscow is turned back by aggressive German Patrol attacks.

Most Assault Bombers provide DAS at the narrow points between the trapped Germans and their main front line.

In the north the Leningrad Air Division launches a full scale assault on Finish air fields and knocks out Kotia, Kuopio and Joensuu forcing Finnish fighters out of range of the front although this is at a cost of 1xIL-4 from AA and 1xIL-4 from Fighter interception.