Breakthroughs and Breakout: Against all expectations the Germans attempt a breakout of the southernmost of the two groups of surrounded panzers north of Yaroslavl through a two deep line of Soviet armour – read below to see how this goes.

Simultaneously using newly arriving infantry corps transferred from the southern front the German forces strike directly north into the swamps and eliminate an enemy infantry stack with mobile units gaining a further hex of advance toward the Leningrad rail line.

In the far north German units out of Murmansk turn the left flank of defending Soviet forces and in the far south the Axis pull back from their adventure south of the Don and form a tighter cordon just on the south bank to use as a bridgehead for launching a more sustainable attack when the slower infantry arrive in force from their mopping up operations on the approaches to Rostov.

Finland & The Army of Norway: In the far north troops moving south from Murmansk now operating past the end of their supply lines attack a lone 2-6* inf reg in the mountains eliminating it and advancing towards the narrow strip of land at the south of the lake system. They are assisted by aircraft from Murmansk and Norway bases.  Immediately to the south two Soviet regiments are eliminated aided by a newly arriving infantry regiment from The Reich. 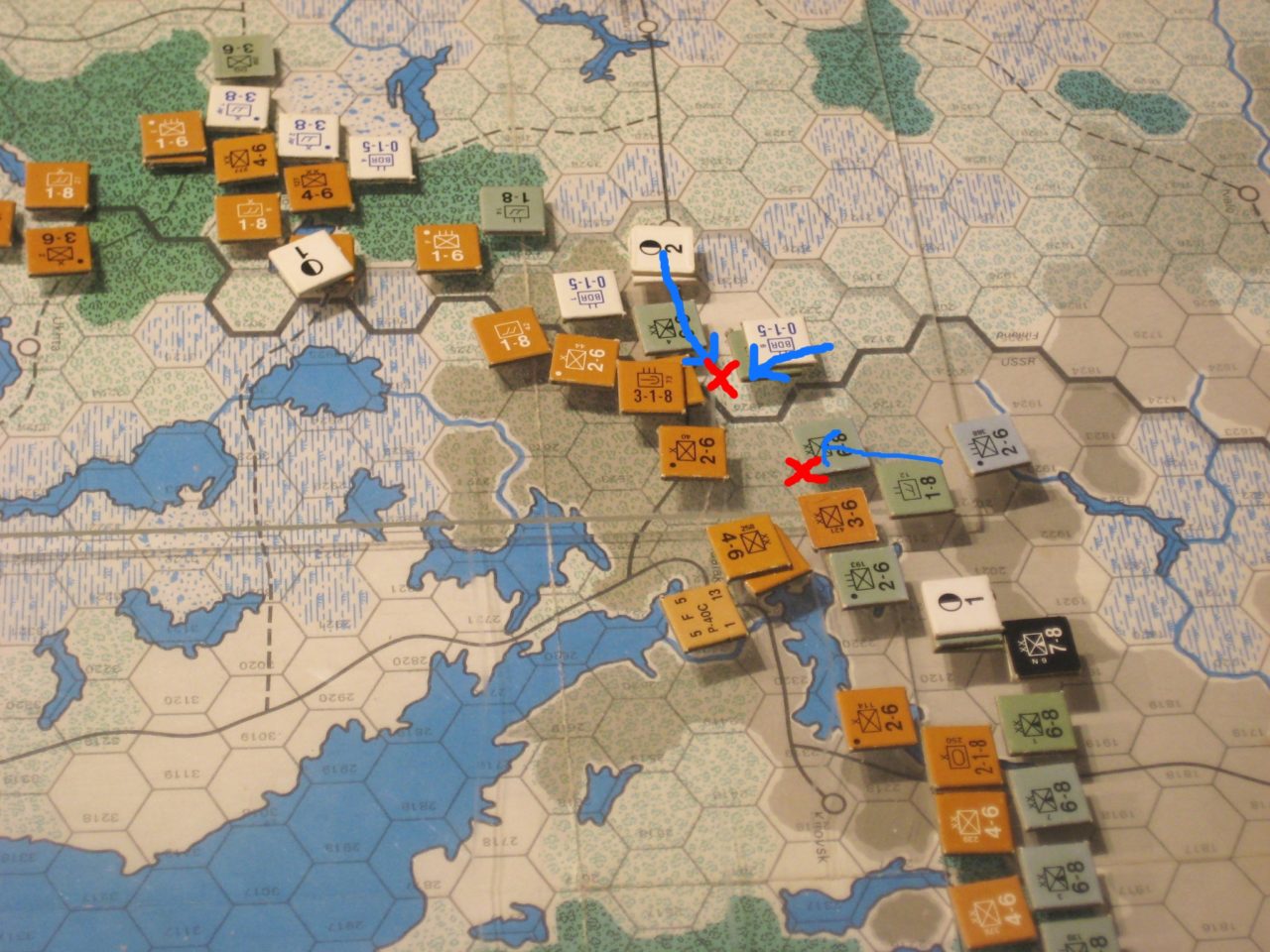 Battles along the Arctic rail line

AGN: With two whole infantry corps arriving from the south the Germans strike into the swamps at a corner hex at the neck of the bulge extending north to the forces holding position on the Leningrad/Vologda rail line. Reinforced by panzer and mech units the defenders are eliminated and advancing C/M troops exploit further threatening to take a second hex of the railway line and cut off a whole swath off defenders. At the same time another hex is gained close to the existing line-occupying forces helping to consolidate the German’s hold on this important railway.

The Germans revised tactic of a broad front approach in the drive on Vologda bears fruit as a 3 hex assault can be mounted on one of the larger Soviet defending stacks. With massed rail gun support the hex is taken troops advancing to within 16 miles of the isolated panzer force to the east. Then in a desperate move to be freed from encirclement the surrounded troops attack west!. The Soviets deemed this a suicide mission against an 8-6-8 mech xx plus rocket regiment over a river into woods. However the 3REs of supplies air dropped in by the Luftwaffe are enough to put the 12-10 panzer in supply and gain +1 AECA (the rest of the force having no AEC due to their U2 status). The key to the attack however is the massive GS delivered by the Luftwaffe which is just sufficient to mount a successful 7:1 attack!. The tankers, tired and battered, underfed and low on ammunition are safely reunited with their compatriots but choose to remain in place forming a bridgehead over the river to the north of Yaroslavl. The second group a few miles north are not so lucky.  Herded into a swamp with a wall of Soviet armour supplemented with massive DAS their fate appears sealed, particularly due the miserable effort by the  Luftwaffe to supply them. (see below).

A further attack is launched on the northern tip of the Soviet fort line still occupying100 miles of front on the East bank of the upper Volga between the German drive and Moscow. It fails; the fortified defenders hold firm and after a sustained assault on the fort the Germans call off the attack and await further reinforcement.

AGC: Nothing to report. 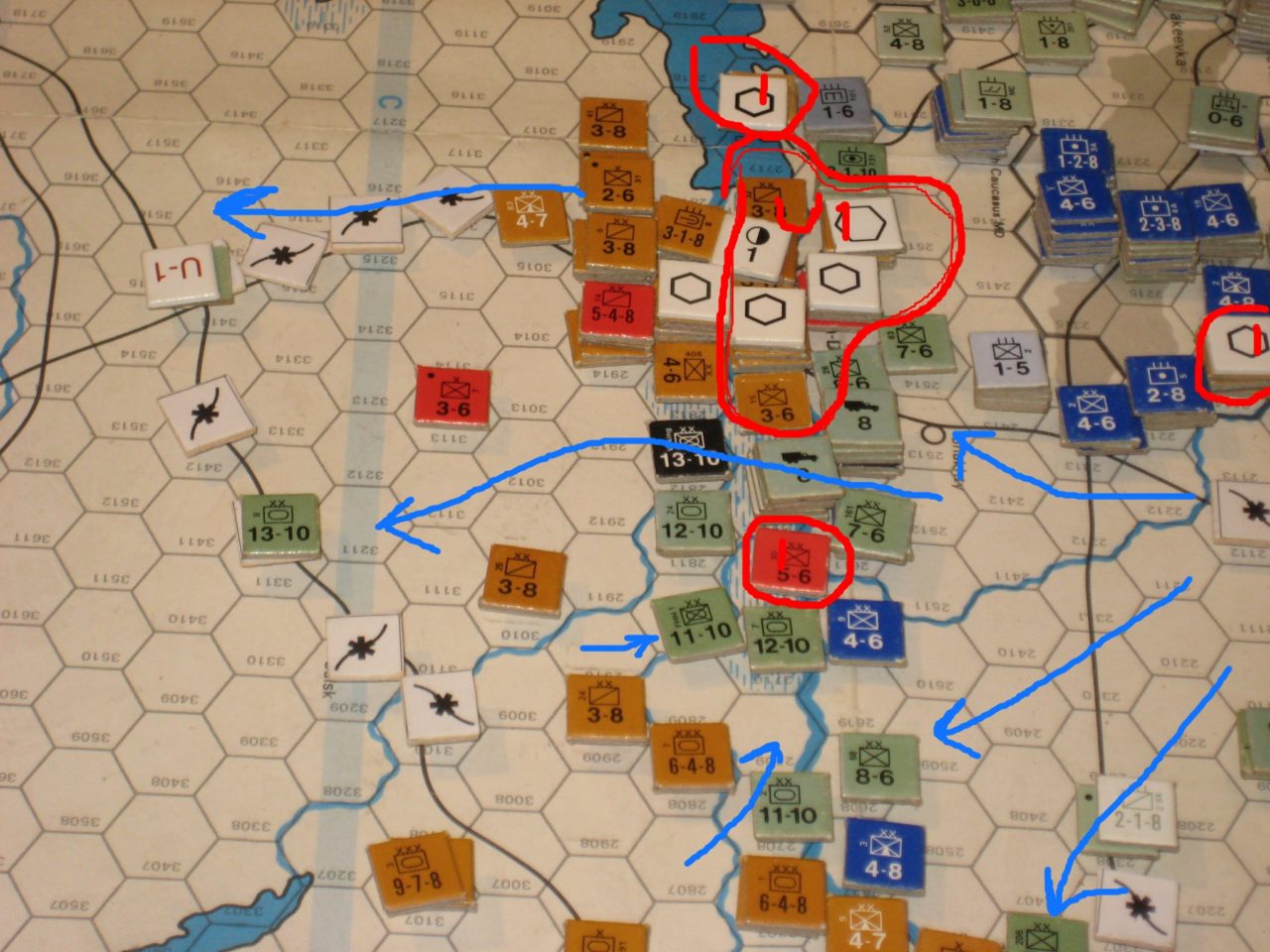 The Axis pushes past Rostov

AGS: Rumanian, Italian and Hungarian forces with a leavening of German units mop up most remaining enemy forces north of Rostov. Stalino remains to be assaulted in due course as does Taganrog. A surviving fort on the Donets completes the list of Soviets outside the city north of the Don.

Advancing infantry establish positions on the west bank of the Don bend except in the east where the line falls short of the river to prevent Soviet infiltration tactics against the intermittent line.

Out on a limb and surrounded by Soviets ZOCs the motorised forces which crossed the Don a fortnight previously are pulled back in a tight cordon to the east of Rostov where an attack punches a hole in the defenders lining the swamps on the south bank of the river to establish a supply line.

A single mech division exploits south to block the rail line to Stalingrad and slow any Soviet relief effort. The surviving 2-8 mot cadre immediately south of Rostov moves further south into the steppe to occupy a rail junction and halt rail movements from the Transcaucuses. Both these blocking moves are aided by a series of lone wolf bombing runs which adding to previous unrepaired damage decimates the Soviet rail net south and east of the city between Rostov and Stalingrad. Air attacks from the AGC sector attempt to hinder transfers south by the enemy.

Air War: As reported in the north GS is the main effort. An air drop to the northern isolated group goes drastically wrong. Early morning fog and mis-direction by Soviet flares and fires scatters 5 of the 7 REs dropped. The two getting through being effectively worthless for the two surrounded divisions.

In the centre and north other than some “topping up” of mopping up attacks by AS all efforts are against the Soviet rail network.  Of the 22 attacks two are driven off by the VVS and the aircraft remaining on target inflict 5 hits.  The Soviets lose 2 aircraft across the front.