Hitler meanwhile promotes the previously unremarkable commander of the isolated spearhead to Field Marshal declaring “Never has a commander who has not had the guts to stand up to my inane and military incompetent commands ever surrendered”.

Not to be outdone Herman Goring declares that if requested he could supply the whole Front from the air so a few panzer divisional should be a doddle.

Finland and Army of Norway: Troops south of Murmansk with air support eliminate a 2-6* Naval brigade in the mountains in a move to outflank the main line of resistance East of lake Imanada.

In southern Finland now the crisis north of Leningrad is averted the 9th pz moves back to attack East and ZOCs the main N/S rail again. Caution prevents the unit occupying the rail because the Finns are just not strong enough to provide any sort of support or relief should the 9th become embroiled in a Soviet counter-attack. 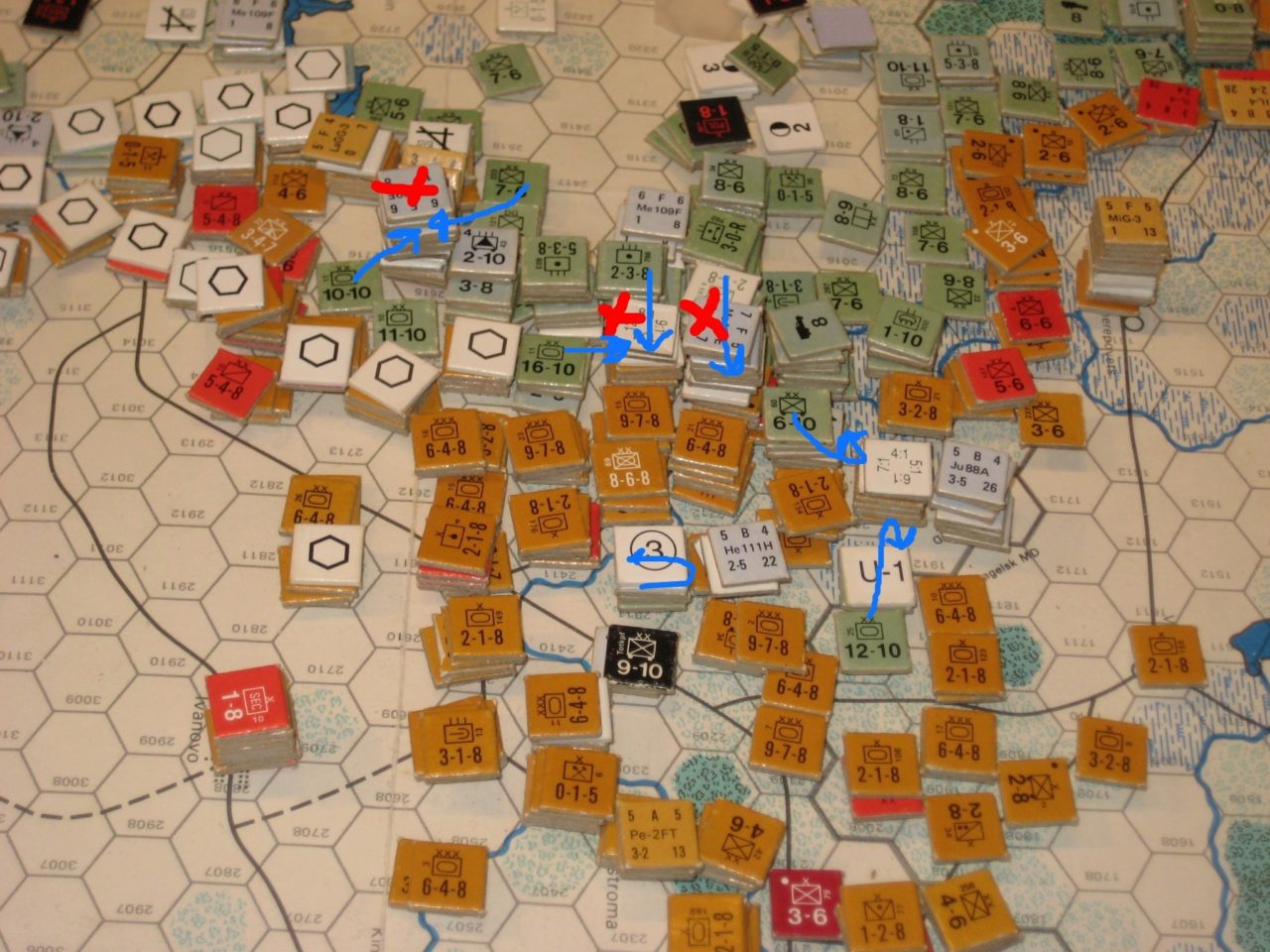 Collapse of the summer offensive

AGN: Group Frederikus NE of Moscow (named after the disgraced former commander) reaches German lines in force and adds its strength to an attack on the northernmost fort adjacent to the German forces East of the upper Volga, eliminating it and widening the bridgehead.

The stalled southern drive to reach the trapped spearhead turns through 90 degrees north into the flank of the southernmost of the two forts which formed the hole in the middle of the German “doughnut” of occupation. The attack eliminates this island of resistance. Simultaneously its adjacent twin to the north falls to an attack aided by massed rail guns where fanatical NKVD supported defenders take their toll on the aggressors. (DR converted to EX).

North of this action the top part of the donut attempts to make contact with the surrounded north fragment of the spearhead but fails 5:1(-2) = NE.

The surrounded southern fragment also fails in its attempt to drive north through the separating screen of Soviet armour. Here gallant and relentless Soviet fighter interception drives off most German air support albeit at some cost (2 downed fighters) dropping the odds to 5:1(-2) where a poor roll produces another NE result.

AGC: All quiet on the Eastern Front. 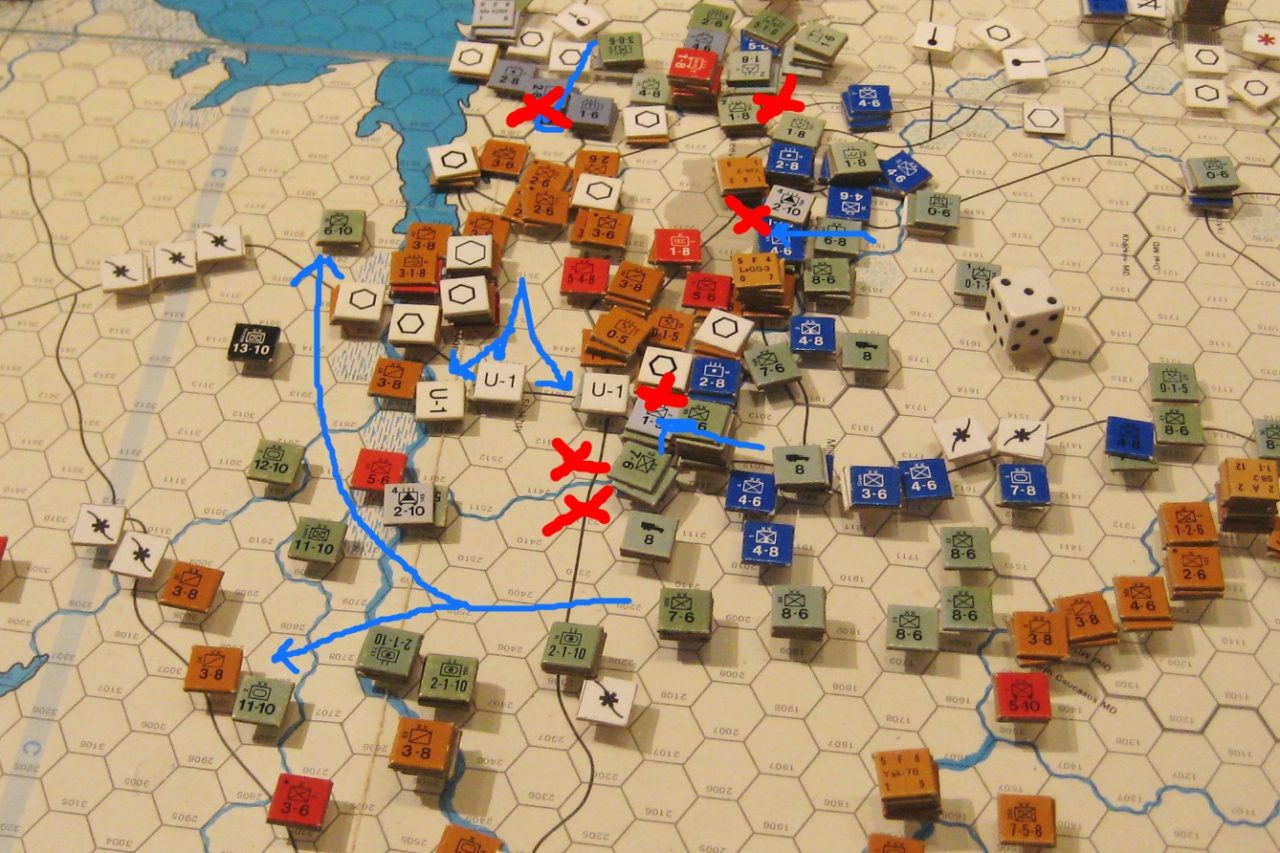 AGS: The drive Southeast continues apace. The Soviet armoured corps fleeing to Rostov is eliminated. Mech units cross the Don River East of Rostov and in the exploitation phase swing in behind the city where a tenuous blockade is created. Meanwhile the mainly Axis Allied assault continues to harry the fleeing Russian hoards taking Makeyevka and Gorlovka.  The 3 panzer units north of Rostov pressed between the city and the units fleeing East extract themselves and move to form an inner wall east of the city preventing any breakout in that direction.

Air War: In the north most air is again used as flying artillery to try and break through to the spearhead.

A large air drop is attempted to supply the southern group of trapped Panzers to the north of Yaroslavl. High cross winds over the drop zone causes many of the supplies to be hopelessly scattered much falling into the hands of the Soviets. Out of 7 drops only 3 REs reach the troops in the pocket.

In the south once again rail interdiction is the major activity aiming to isolate Rostov from reinforcement and minimise interference to the blockading forces.16 missions produce 5 hits.

Air losses:
Soviet 3 (including one under repair overrun on the ground)