Prokhor looks out from the crow’s nest on the destroyer moored up in Murmansk harbour. The weather has been warming and there was a definite feeling that the icy snows of winter were receding. He recently heard that they were to prepare to make steam post haste and obtain much needed supplies from Archangelsk, formerly icebound to the east. He had observed the narrow channel to the harbour had widened considerably over the last few days and only small chunks of ice remained littering the calm waters of the channel. Within a day they would no longer pose any threat and they could sail.

Enemy activity had been constant and currently their guns were trained to the city outskirts anticipating an enemy attack. Their large guns would help to break up any assault and cause losses to the enemy but he also knew that hunger and lack of munitions was degrading the defenders morale and ability to resist the invaders and feared an assault may cause the city to fall; all the more important that they set sail soon. He heard a drone in the distance from the west and swung round to take a closer look. Air raids were rare and he feared this presaged the much anticipated assault on the city.

But the enemy aircraft were already over the front lines and he heard no explosions? Too late he realised the enemy airmen’s intent. His arm reached for the siren and he tuned the handle furiously with all his might. As the wail rose up from the siren the first bombs were falling. A near miss showered him with still icy cold water, the second landing in front of his position blew the forward gun turret in to the air and an explosion ripped through the ship as the ammunition exploded. Prokhor was hurled into the air and down into the icy depths, the momentum of his fall propelling him deep below the harbour surface. He rose a few seconds later already shivering from the icy slivers of cold water piercing his core. He trod water for a couple more minutes not noticing the chaos all around or the vast wall of steel turning toward him. He slipped below the water as the blackness enveloped him dulling his senses as he slipped into unconsciousness.

Above him the bombs fell silent as the vast steel hulk of the once proud ship settled onto the harbour floor.

Weather: Warm winds melt the ice in A, B and C. turning the ground to Mud. Clear elsewhere.

Army Norway and Finland: Henkel’s out of Norway bases sink the destroyer support at Murmansk and ground troops follow up with a desperate low odds assault. The attack is a success and a HX eliminates the defenders and grants the Germans access to the city. 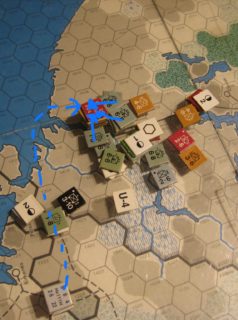 The Fins eliminate a Soviet stack but suffer a divisional to cadre loss in the exchange of fire.

AGN: An attempt to nip off the Soviet advanced guard fails (NE) so armour redeploys to a defensive posture along this sector.
The success at Kalinin continues to widen the breach as four more out of supply stacks of Soviet troops are eliminated.
Panzers on the right flank fearful of the Soviet build up NE of Moscow pull back and consolidate. 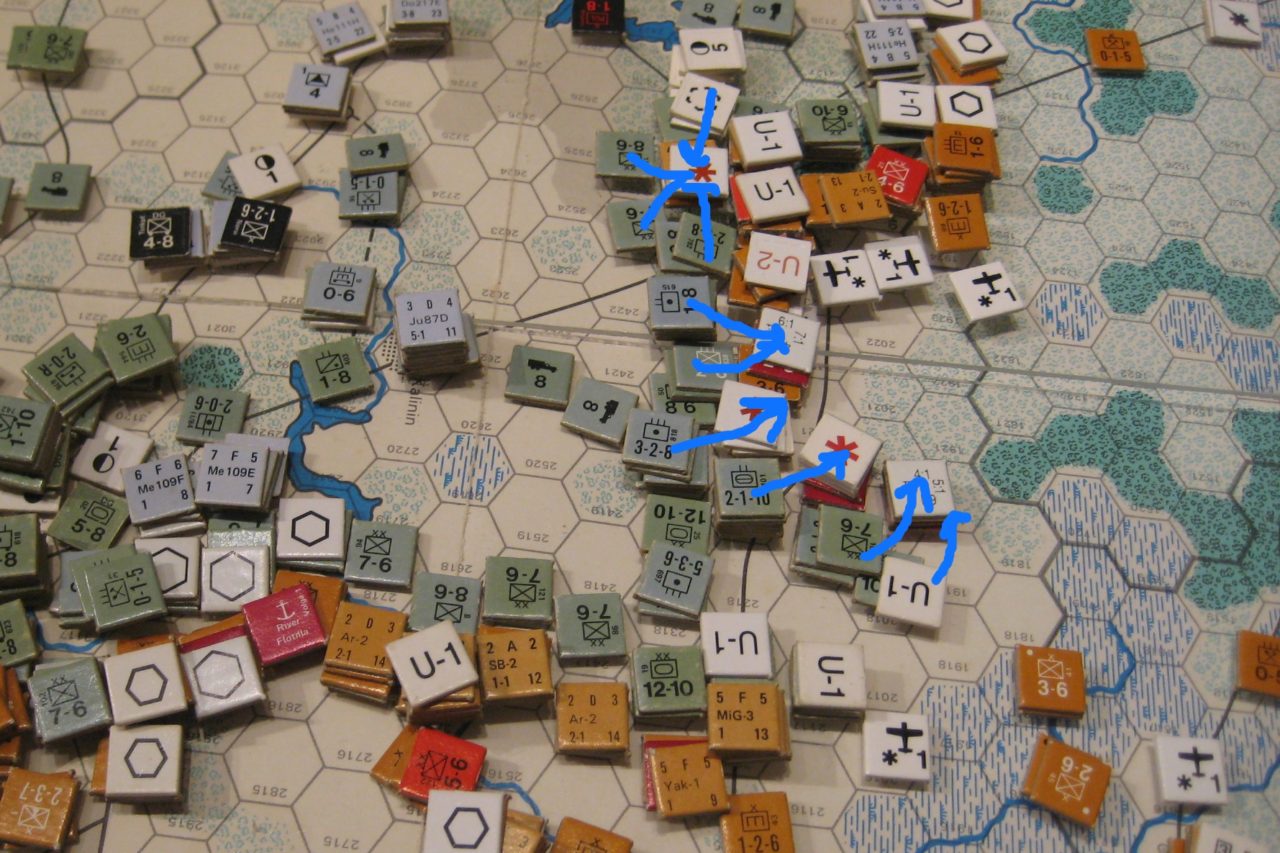 AGC: The isolated Soviets outside Moscow West are eliminated.

AGS; The front is defensive except at Kursk where two exposed Soviet stacks are eliminated.

11th Army & the Crimea; The Rumanians finally stage an assault on Odessa but are repulsed and retreat leaving a small rear-guard.

Air War. The Luftwaffe mainly occupies itself with rail bombing and DAS but the usual harassment raids around Kalinin stifle Soviet reaction to the widening hole in their front lines.
In the south large raids are mounted against bases that reconnaissance has determined host the transport fleet but with little success.
As reported above the Soviet destroyer squadron at Murmansk is eliminated in an air raid.