The second May II turn extended the surging momentum the German armies built up. By now, the front line corps were maxed out with 3 strong divisions, 3 appropriate supporting non-divisional units and two artillery units each. The armor corps approach 60 SP each, and get the favorable armor DRM for being 100% armor!

There were three main themes for the Germans this turn:

1) In Belgium, focus on screening in front of Antwerp and smashing the exposed southern flank to move behind it and cut it off. A combination of overruns and successful combats brought the 4 German corps tasked with this attack two hexes closer. The southern portion of the army group is focused on protecting the right flank of the forces in the Ardennes.

3) At the Meuse, maximum effort to breaching that obstacle. The TEC grants defenders great benefits (attackers 1/2 SP, and since most are in woods, favorable DRM to the defender), so the French are motivated to hold the line at all cost. And cost it did. But, in the end, two powerful German corps (XV and XVIII if you have access to the photos) bullied their way to the west bank of the Meuse. This was probably the highest-risk moment in the campaign so far, leaving these corps exposed. They would not be able to retreat without losses in the case of a strong French counter attack. 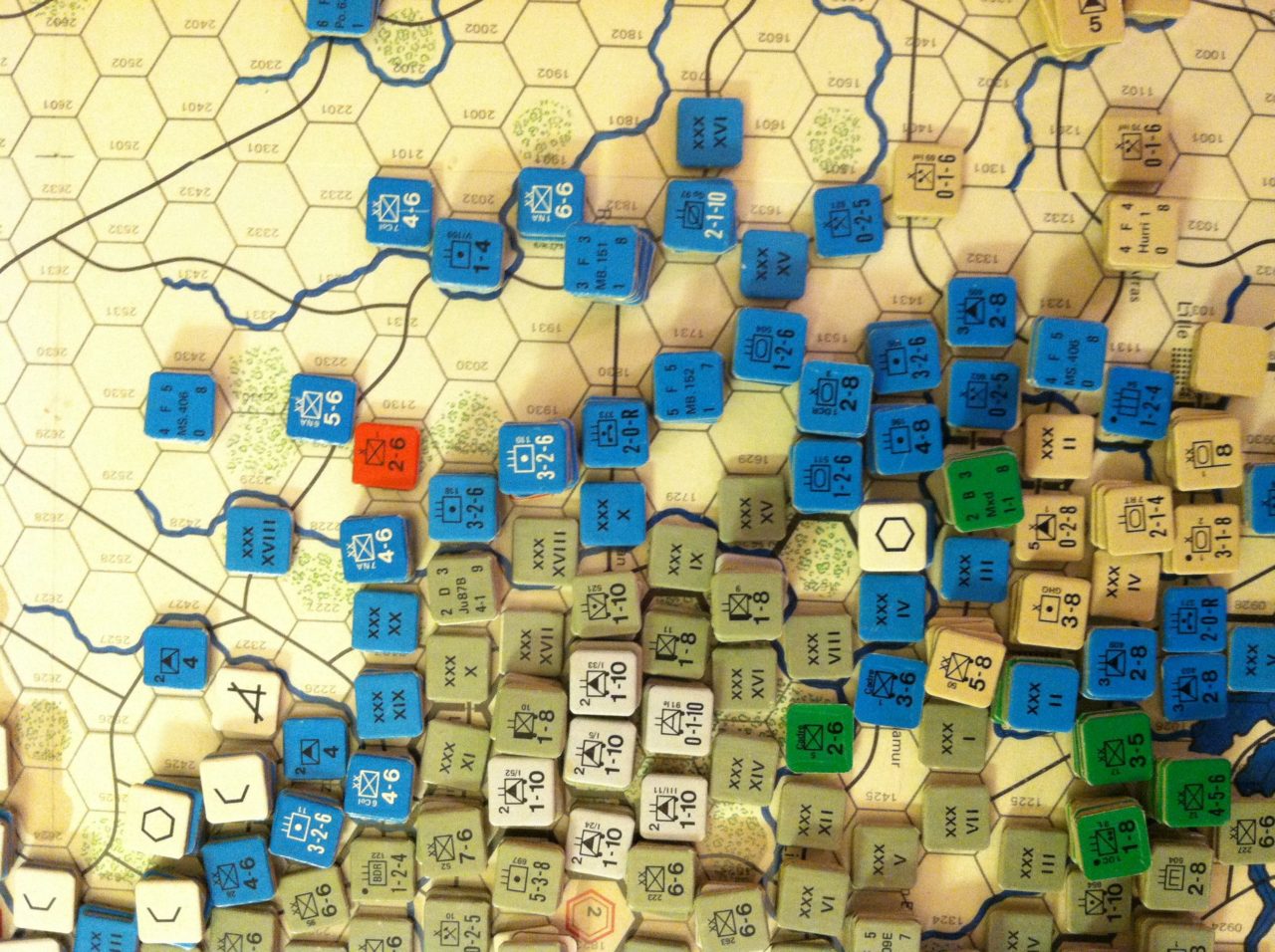 Air power concentrated on the two main points of attack at the Meuse, with a spread of combat support elsewhere. Since several French and British air units were inoperable, it was worthwhile running airfield bombing missions (a hit on an inoperable unit destroys it). Two French units were thus destroyed.

German exploitation movement saw the final adjustment of the motorized units, filled in some gaps in the line, filled in an open spot or two in the front line corps. Now, it was time for the French to roll the dice… 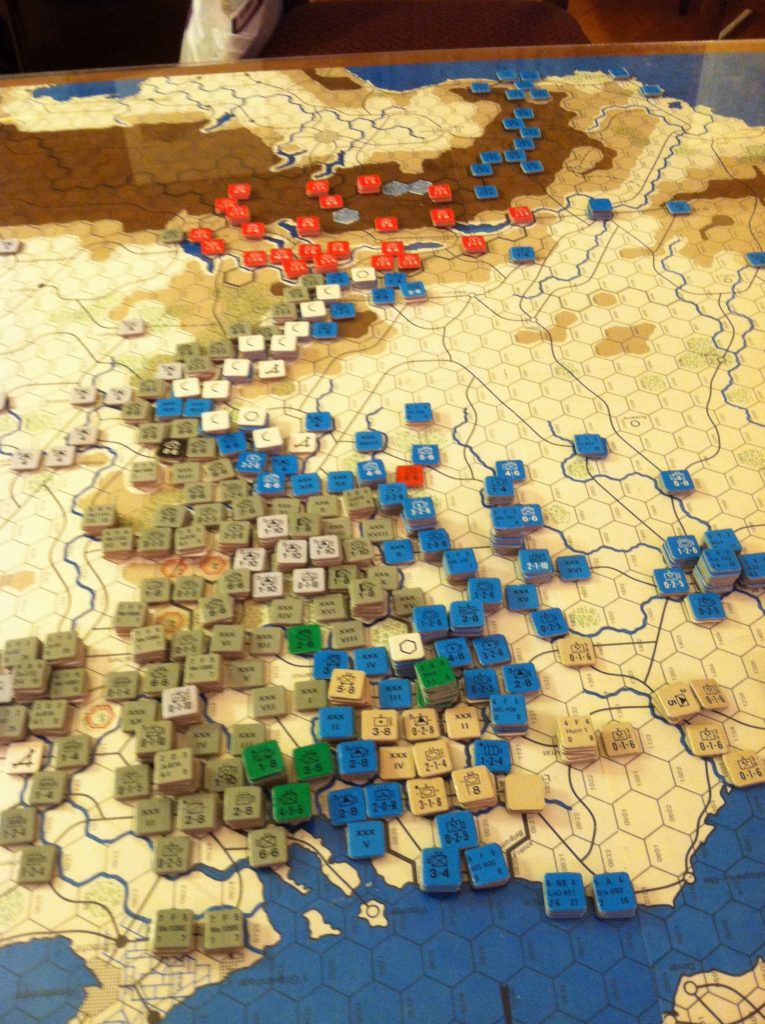 1) Paris Reserve: Units from around the country gathered in Paris. Now there is a strong corps-sized formation (that is, the full 8 units in a stack) and more on the way. The trick is not to deplete the front line defenders, but to keep some punch around the capital. Also, the engineer corps is busy building a ring of defensive fortifications around Paris (if you have access to the photos, you’ll see three of them just to the east of Paris, hatching forts that should come into play next turn.

2) Strong Left Flank: Still under the delusion that the main thrust will come through Holland and along the channel, the French and British are lining up their strong motorized and mechanized corps around Brussels. The remnant of the Belgian army strongly holds Antwerp, and it actually looks like they could make a fight of it … if this was where the fight really was! …

3) Strong Counter-attack: Much effort went into building the strongest possible forces around the front-most German corps, and surrounding them to prevent retreat without loss. Most of the French and British air force flew combat support bombing missions on the three points of attack (I corps, XV corps, XVIII corps). The French were hampered by the Blitzkrieg rule, in effect for this last turn, that reduced any moving units’ SPs in half … so any units that moved up for the counter attack were weakened, but still took up the same amount of space in the stacks.

Once ready the attacks began … and disaster struck. The first attack in the north was AR, with many of the French and Belgian units also trapped in ZOCs (friendly units do NOT negate ZOCs for combat retreat). Many losses. Next, the critical attack to push the German armor back over the Meuse resulted in an AH (half attacking SPs gone, the rest retreat) and NE (no effect). 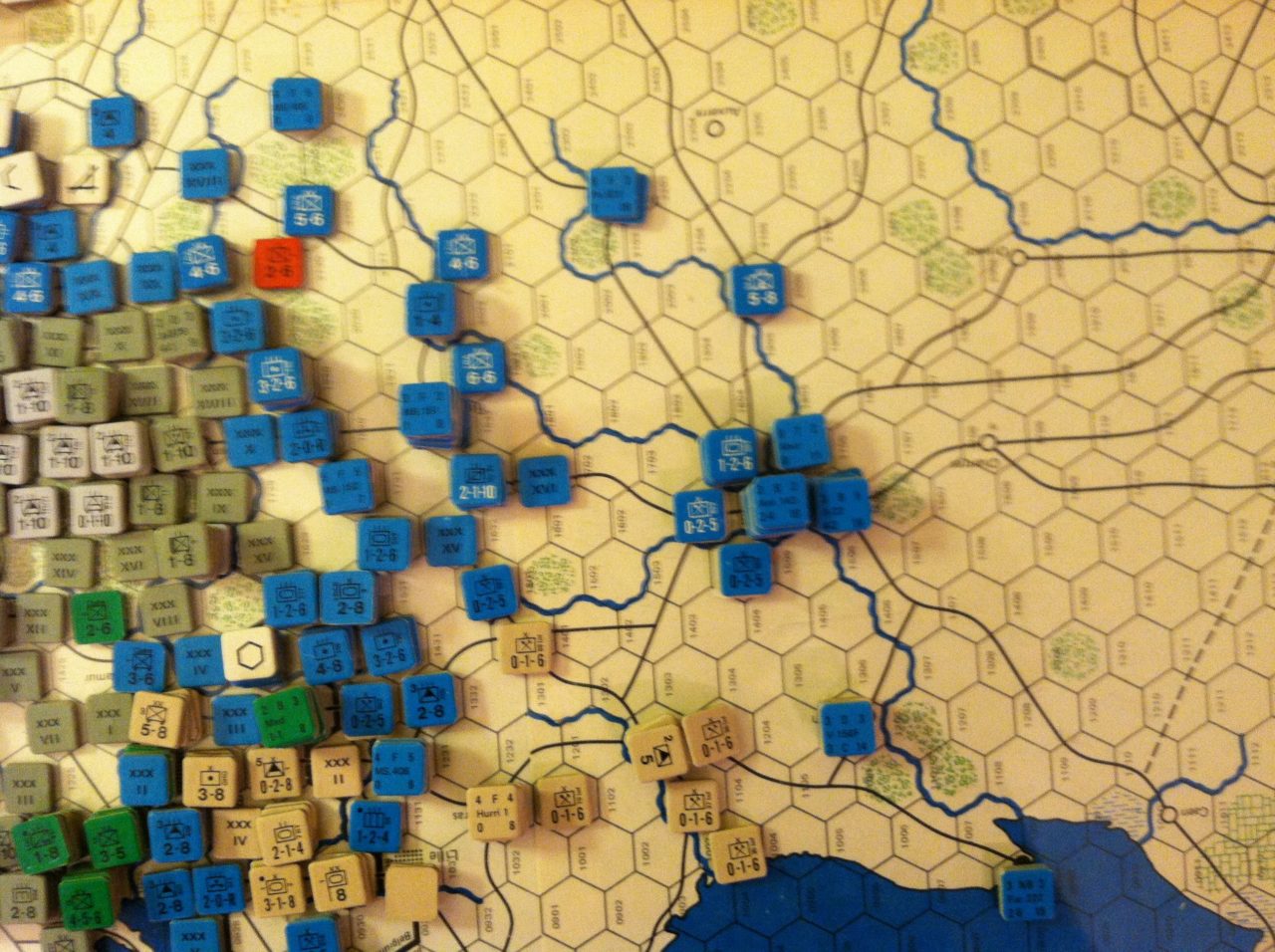 May II 40: Paris prepares for defence

The stunned French high command used Exploitation movement (at 1/2 MP due to Blitzkrieg) to fill in some blanks, position some French motorized infantry to threaten the German right flank in the Ardennes. Also, filling in some defending stacks so they get the favorable defensive DRMs next turn for having 1/5th armor REs in the stack. The turn ended on a gloomy note for the Allies.

After Barbarossa – The status of Ken Newalls Scorched Earth game