After a truncated attempt and a reset of the game (I forgot non-divisional units don’t have ZOCs) I’ve gotten to complete the Invasion Turn. Here’s a brief summary:

German Movement: In this phase the Germans get to take a full movement phase. Most of the units can move, thought the Reserve remains in place. The Plan is simple: – On the right flank, slice north and west to capture the cities and knock Holland and Belgium out of the war.

– In the center, punch straight through Luxembourg and the Ardennes, and breach the Meuse as quickly as possible.

– The southern flank is static

This phase saw a significant number of over-runs, driving the German corps (note the use of corps markers) over the border and up against the second line of defense. Eben Emael fell (well, the rules give a virtual step-by-step guide how to capture this air-assault-vunerable fortress. But what the hay, I went for it). In southern Holland the German armor was able to double-overrun. 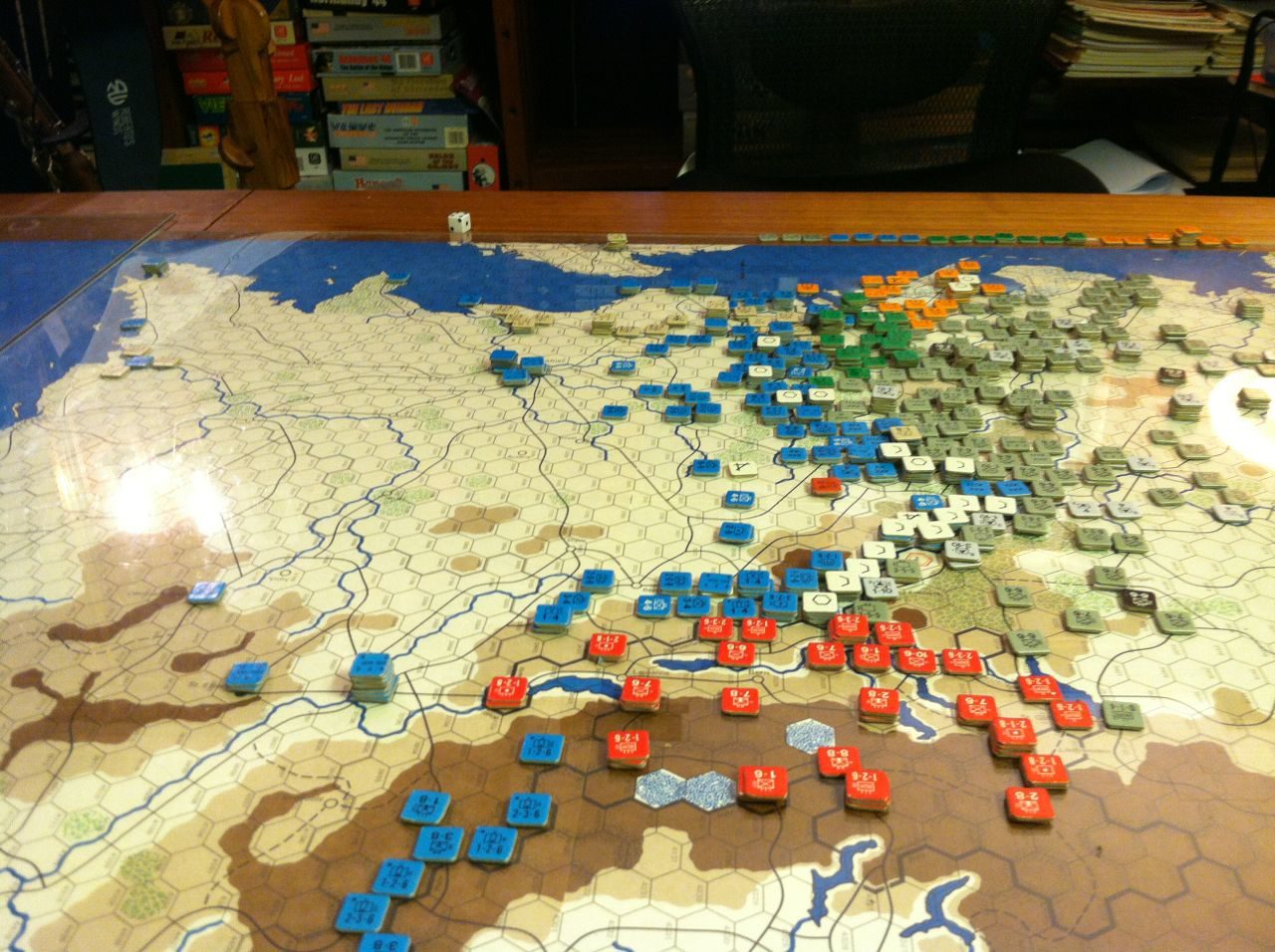 View over the board from the south during the invasion turn

I made the strategic decision not to force the Maginot Line at all. Thus a significant number of divisions moved north and joined the effort in the Ardennes. Joe and I conferred on the validity of this approach and decided it was OK. We agreed that the Germans should leave a reasonable force on the West Wall since they couldn’t be sure a counter thrust was not coming.

German Air Movement: The air war is a game in itself. For you non-Euproists (Europanians?), the phasing player sends out his / her planes on missions (what you expect: bombing, combat support, rail line bombing, etc.). The defending player has a CAP where fighters within 1/2 movement range attempt force attackers to abort the mission (roll a 6 or if superior factors, 5 or 6). Then the non-phasing player gets to send the fighters out on interceptions that can result in planes getting sent home or even shot down. The surviving attackers execute their missions at the appropriate point in the game (i.e. combat support will execute in the combat phase).

The German air force is a bit smaller than the French, but the ME109 fighters (excellent air attack strength) and the Ju878 (powerful short range bomber) more than compensate. There were some notable heroics by the Allies, with the tiny Dutch air force turning back some German fighters. And French aviators must have had their Wheaties for petit-dejeuner, because the casualty rate was 3:1 in their favor.

The German Luftwaffe strategy was almost exclusively centered on combat support. They heavily supported attacks on hard points like forts and river crossings. Very little air field bombing or interdiction was attempted, that will wait for future turns. 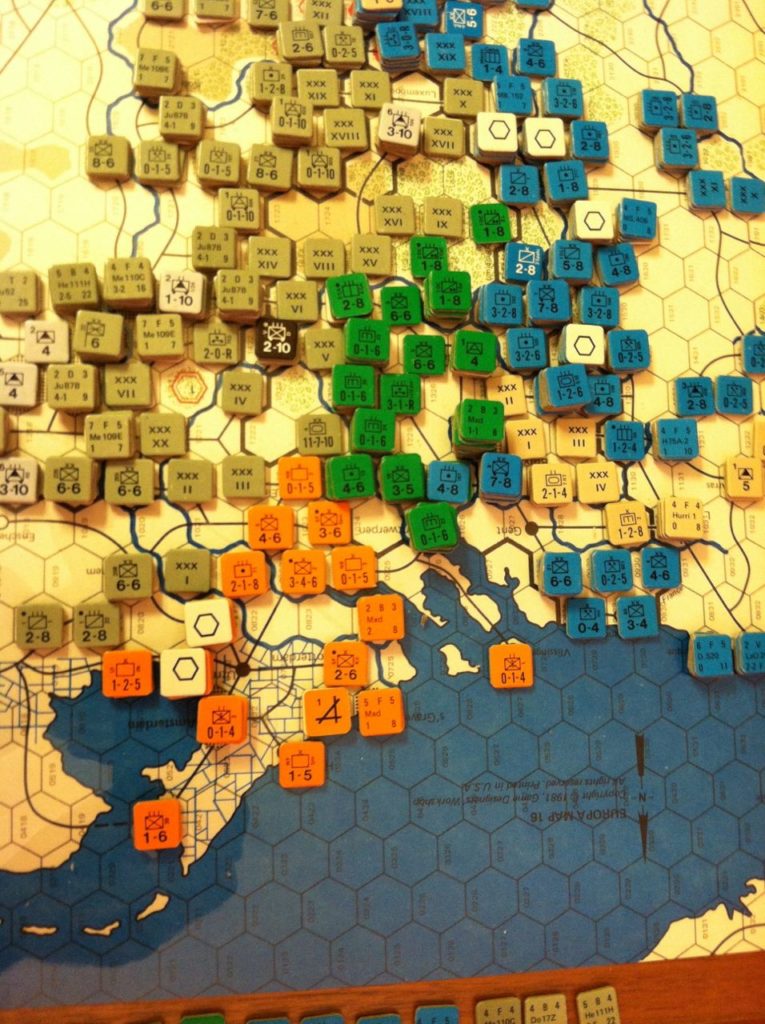 The Benelux countries during invasion turn

German Combat: As expected, the Germans pretty much ruled. Almost every one of the 20 German corps was constructed with a mix of units that allows the maximum stack of 8 units (experience gained in my first attempt schooled me on this).

Infantry corps were endowed with artillery and engineers to minimize the defensive value of Allied forts. The armor corps were kept pure armor and motorized as possible … this allowed them to get from 50% to 100% of the Armor Effectiveness Capability DRMs as possible (anything from +1 to +3 on the die, enough to neutralize terrain and fortification benefits.)

Notable heroics on by the Allies at Liege resulted in that city remaining in Allied hands. This puts a crimp in the German assault, as that stout defense left 3 of 4 surrounding German corps on the wrong side of a river (attackers halved) and in a ZOC, which will slow movement next phase. 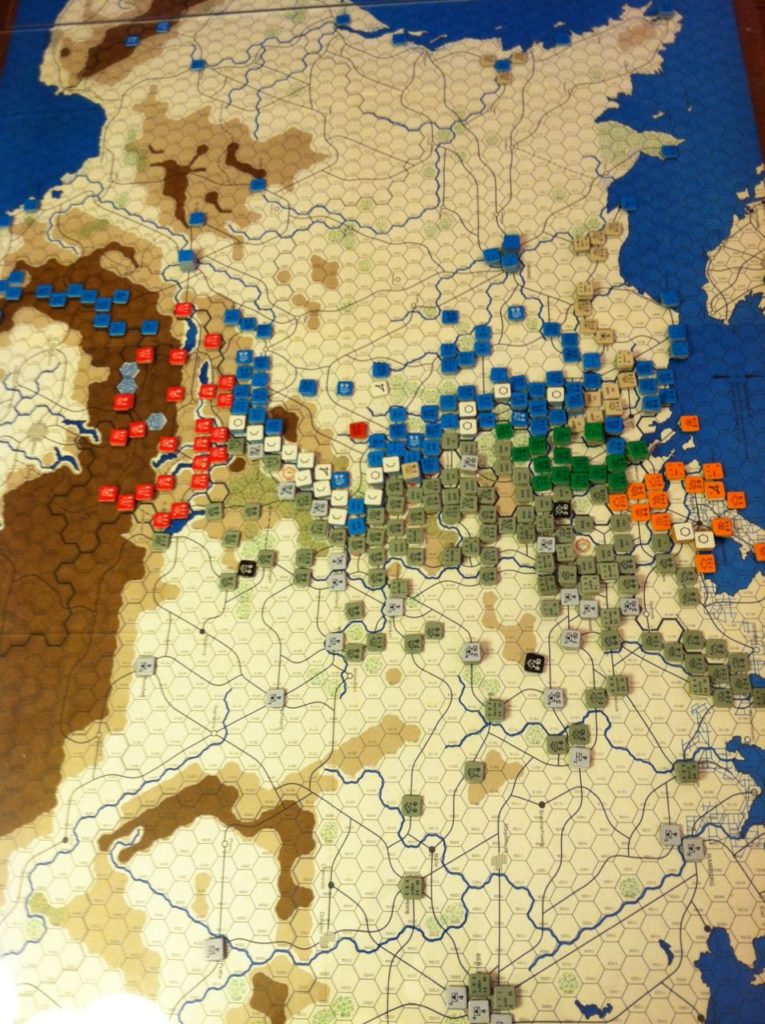 View over the board from the west during the invasion turn

Allied Reaction: In this phase the Dutch and Belgians get to react with a limited move. The French and British can move as well, but only the troops north and west of Paris, and they must remain north of the Meuse. Basically, the Dutch and Belgians filled in their lines, re-inforced river lines, pulled the large, valuable divisions out of now-doomed Liege to fight another day. The French and British rushed forward (as per scenario rules) and deployed around Brussels awaiting the assault.

The Blitzkrieg rules are an important factor: you can move during reaction, or during the subsequent Allied movement phase in Turn 1 but not both. For the first few turns, most Allied troops will only move 1/2 their MP and, if they move, attack at 1/2 SP! It takes a few turns until they figure out how to march and chew gum at the same time, when these restrictions are lifted.

I wanted to move now so any counter attacks next turn will be at full strength. I’m risking getting cut off and destroyed, but if I can take down some German divisions and special units now it may blunt the blitz just enough.